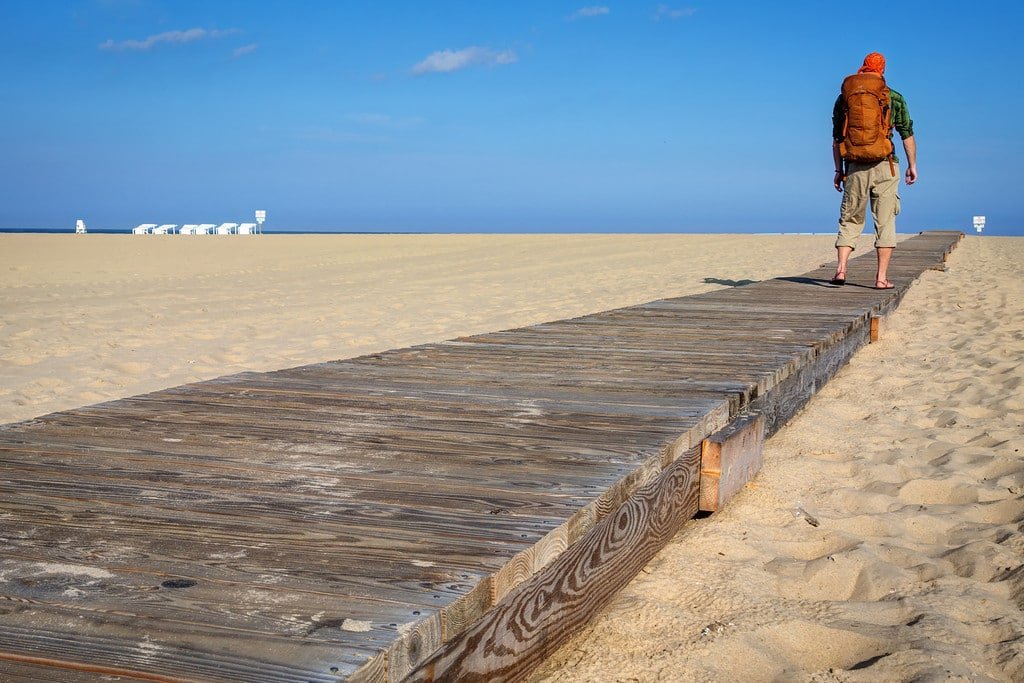 Hitchhiking America: End of the Road

With only 100 miles between me and the Atlantic coast, today was the day. Time to embark on the final stretch of my hitchhiking adventure across the United States.

Day 37 of my journey across the United States began with a boat ride across the Chesapeake Bay. With no good places to catch a lift on the opposite side, I’m forced to walk about a mile into the town of Stevensville.

There’s a Cracker Barrel in town. I decide to treat myself to a large breakfast. This could well be my last day hitchhiking, after all.

With a belly full of eggs, grits, and buttermilk biscuits, I attempt to locate some cardboard for a sign.

After finding some in a gas station dumpster, I scrawl out “OCEAN” in big block letters with my oversized sharpie. 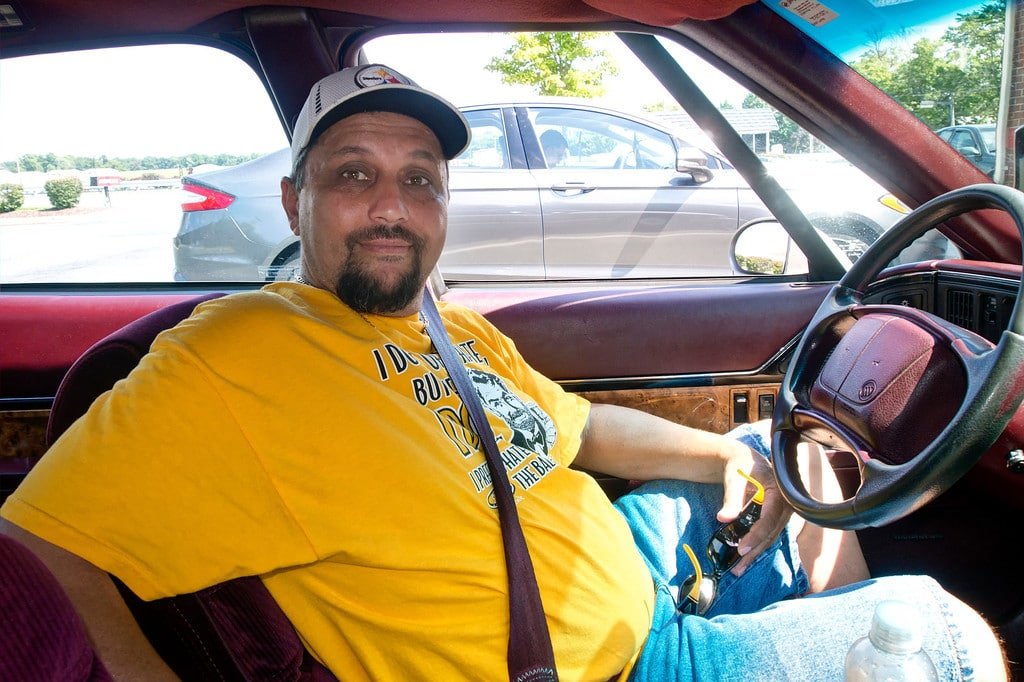 I then walk towards the edge of Route 50 to assume the position. Sunglasses off, sign in one hand, thumb out with the other, and a big smile on my face.

A run-down Buick pulls over 10 minutes later. The guy inside leans over and says he can drive me to a town called Trappe about 40 minutes away.

I climb in and learn that Nebraska (that’s his name) used to travel the world as a military brat with his parents.

A hardcore Pittsburgh Steeler’s fan, he was recently laid off from his factory job.

These days his passion is cooking (and eating) alligator meat. He explains that deep-fried alligator tail is a dish not to be missed. I promise him that I’ll try some next time I see it on the menu.

Nebraska drops me off at another gas station where I grab a snack and decide to try a new sign. A few readers following the trip in real-time on my Facebook page recommend I try one that simply says “Travel Blogger”.

So I spend 15 minutes sitting on the curb putting it together.

While I’m working, a pair of delivery guys walk up and ask if I need a lift West. “Wrong direction,” I say. “I’m headed to the ocean. But thanks!”. 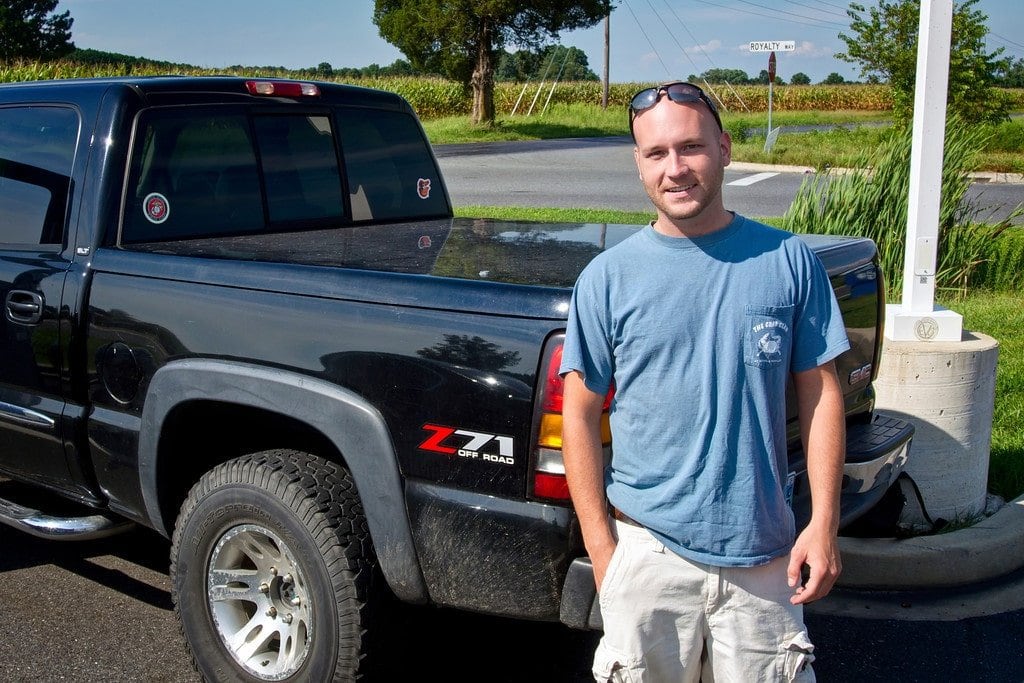 With my new sign complete, I find a spot along the road with enough room for a car to pull over. But that’s not necessary, as a young guy walks over from the parking lot to offer me a lift after only 10 minutes.

James is a US Marine currently studying environmental science under the GI Bill. He’s never hitchhiked himself, but occasionally picks people up.

He and his friend were headed to the town of Salisbury, another 40-minute drive.

I hop in the truck and we take off down the road. This day is going great so far!

James drops me off at yet another gas station on the outskirts of Salisbury. I ditch the travel blogger sign and pull out my “OCEAN” one once again, standing near the entrance. 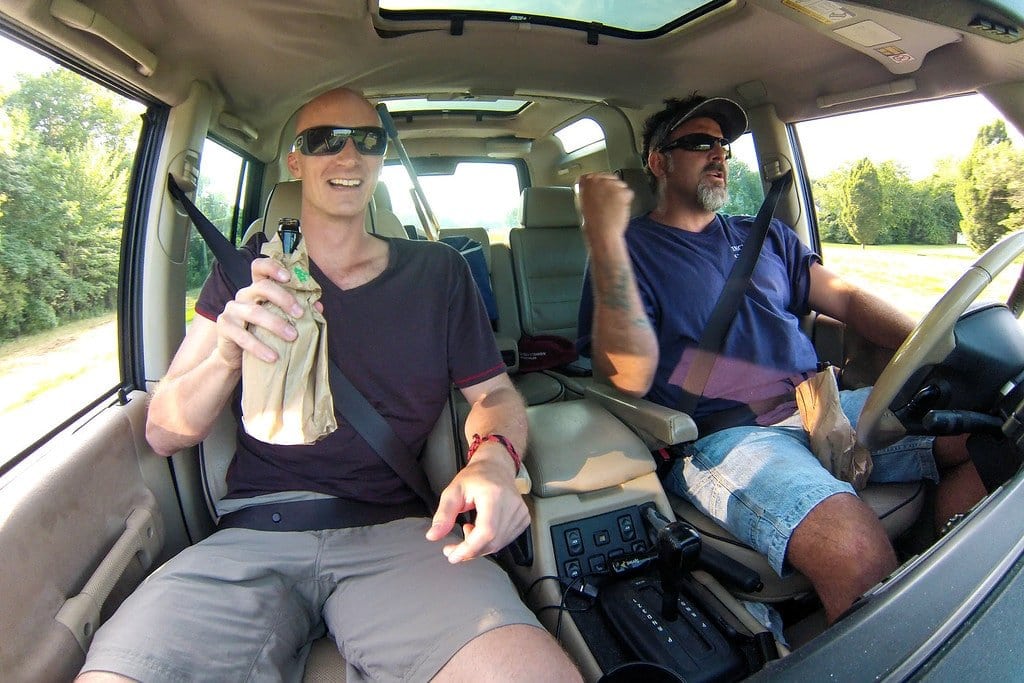 Most people need a really good look at you before they’ll commit to picking up a hitchhiker. Which is exactly what Ed did before he pulled over.

He saw me on the way in, contemplated it while he purchased gas, and made the decision on his way out. I jumped into my 2nd Land Rover of the trip and we drove towards the coast.

Ed builds yachts for a living. Including the world’s fastest propeller powered speedboat called The Phenomenon. 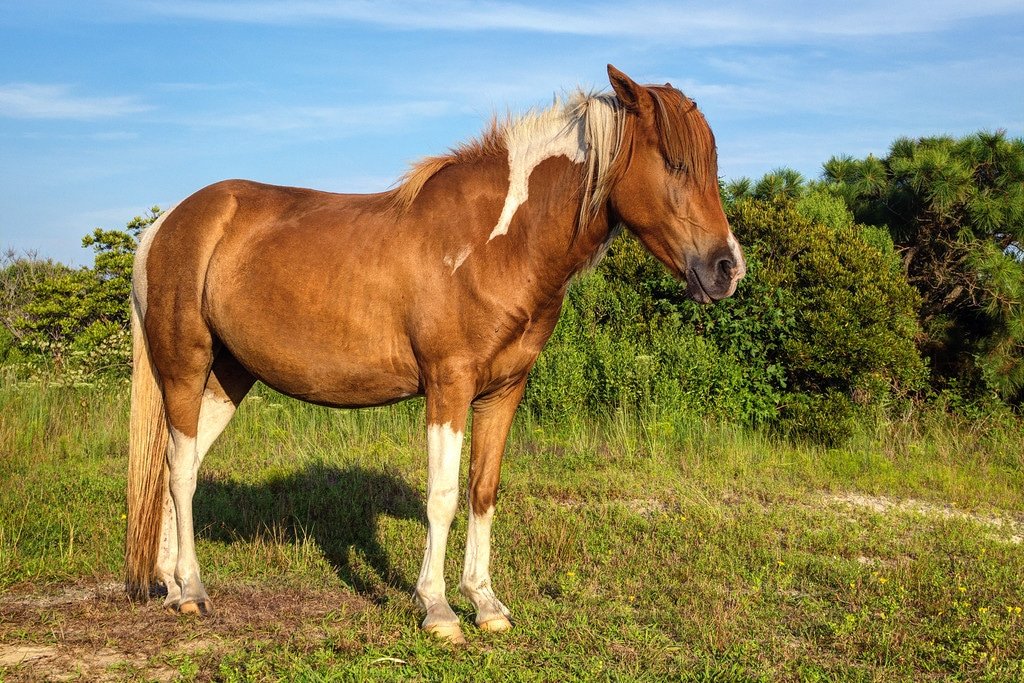 When Ed discovers he’s my last ride on this epic adventure, he offers to give me a personal tour of the Maryland coastline. We stock up on “beverages” and drive out to Assateague Island.

It seems Maryland has its very own population of wild island ponies!

Assateague ponies are a unique breed of feral horses that live on the island. Numbering about 300, each year some are rounded up and auctioned off to breeders nationwide to pay for local fire-fighting equipment.

Next we grab some food (soft shell crab) at a place called Captain Joe’s Shrimp Boat, more drinks, and Ed drops me off in Ocean City. My final destination. 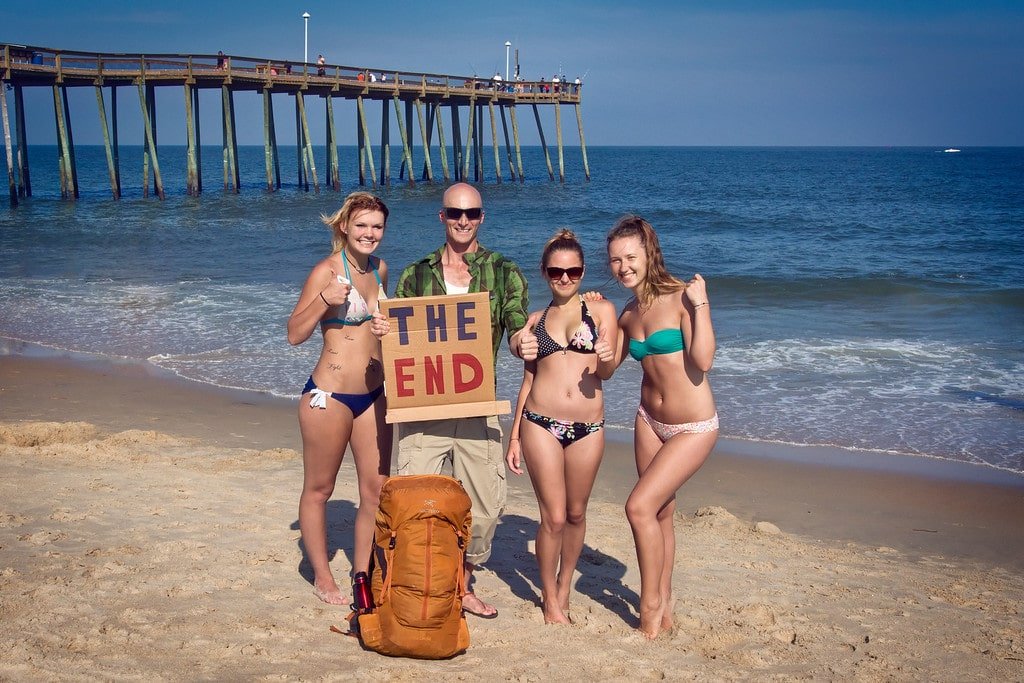 Ocean City is one of those slightly cheesy beach towns with a boardwalk, carnival rides, resort hotels, and saltwater taffy on every corner.

To make my coast-to-coast trip official I’d need to go for a dip in the ocean.

So I whip up one final cardboard sign and walk to the beach. On the hot sand I meet Shai, Marina, and Laurentia, a group of sunbathing bikini girls, who help me celebrate the end of my journey in style.

Hitchhiking across the United States has been one of my favorite travel adventures so far. Something I’ve always wanted to attempt. Everyone told me it would be dangerous or impossible these days. They were wrong.

Most of the people I met were friendly, sane, and fascinating.

Succeeding in this only strengthens my desire to do more of it. ★

My hitchhiking journey across the United States is now complete. You can read about the whole adventure using the links below.