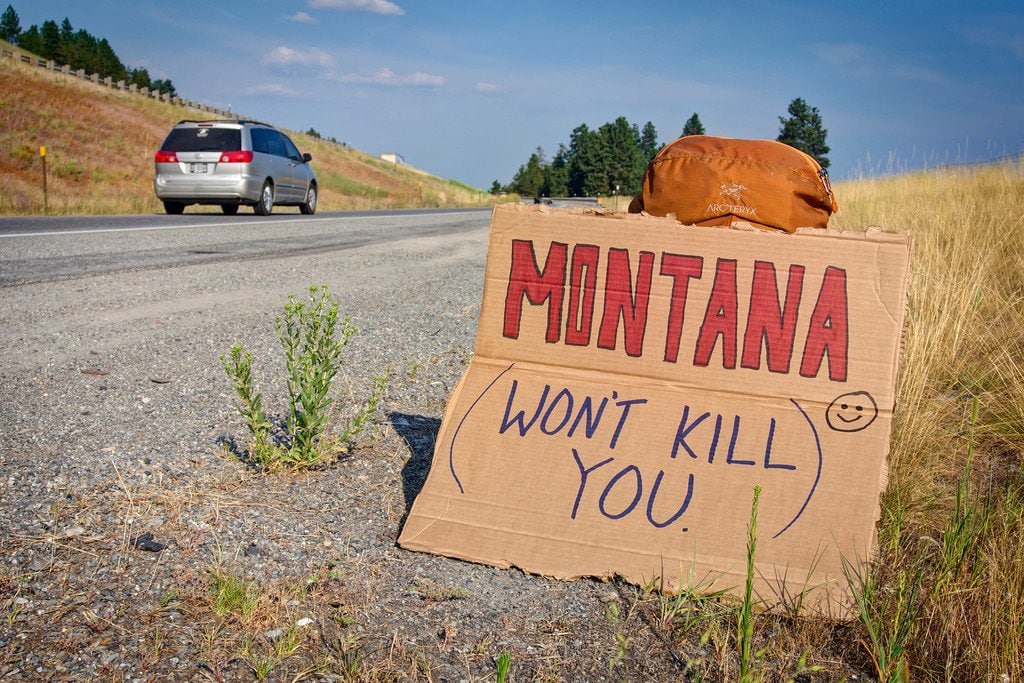 Hitchhiking America: You Can Trust Me.. Really!

This update has me quickly passing through Idaho heading East on my way to Montana. I encounter my first weirdo and hitch a lift on a motorcycle.

Day 14 of my epic hitchhiking journey through the United States starts in Spokane, WA. After hopping onto a city bus to the edge of the city, I walk towards the on-ramp for I-90 East. But I’ve got competition!

A very large lady is already standing on the side of the road with her thumb out. “Precious” was a bit wary of me, and didn’t want to talk much.

Soon a female driver pulled over for her, also looking at me with distrust, giving her a lift out of there. Probably in order to rescue her from the suspiciously friendly hobo with a shaved head.

That was fine with me. No more competition for rides! 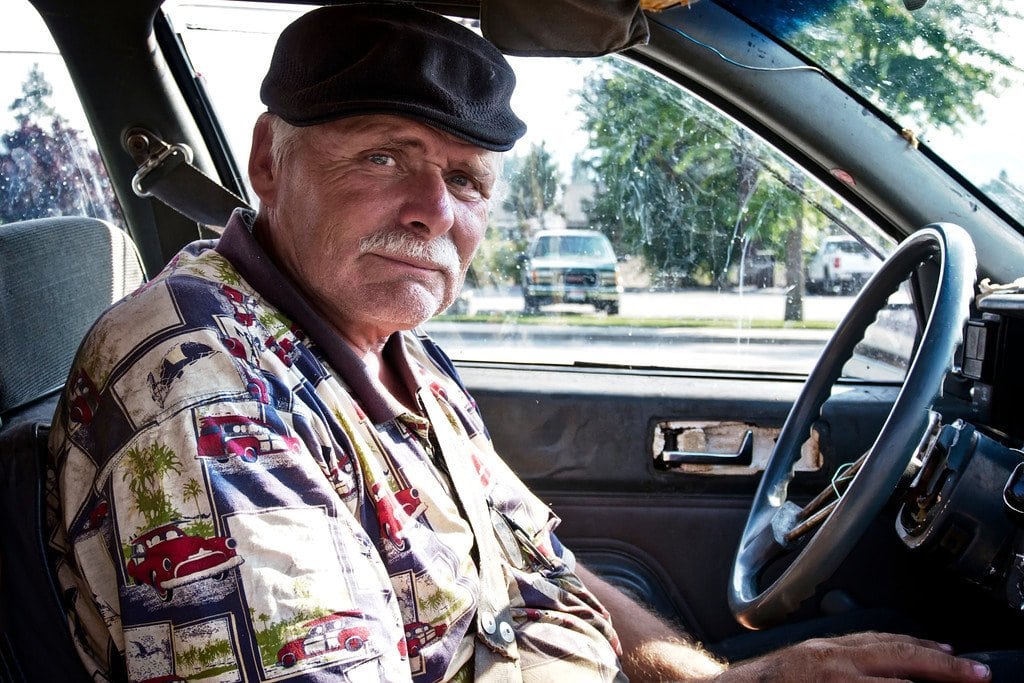 In less than 20 minutes a beat-up Chrysler K-Car pulled over while I was flashing my “Montana – Won’t Kill You” cardboard sign.

Once inside I knew this would be an interesting ride.

David isn’t exactly the cleanest fellow around. In fact, I’d describe him as a hoarder of trash. It took him a few minutes to clean all the crap out of the passenger seat for me to sit down.

When I did, I soon noticed the kitty litter box full of shit on the floor between my feet.

But there was no sign of a kitty. Unless of course the poor creature was buried beneath the mountain of refuse piled in the back seat. Which frankly wouldn’t surprise me.

Over the next 30 minutes I would learn that David used to be in the Navy, builds wooden boats that his friends cut up into firewood, has a serious problem with road-rage and racism, drives erratically, collects sand from Arizona, and once threw a hitchhiker out of a moving car for not wearing a seatbelt — running over his foot in the process.

My hand moved a bit closer to the small pepper-spray canister in my pocket.

I steered away from controversial subjects and tried not to piss him off until he dropped me off on the outskirts of Coeur d’Alene, Idaho. David was the kind of guy everyone warned me about on this trip. A lunatic. 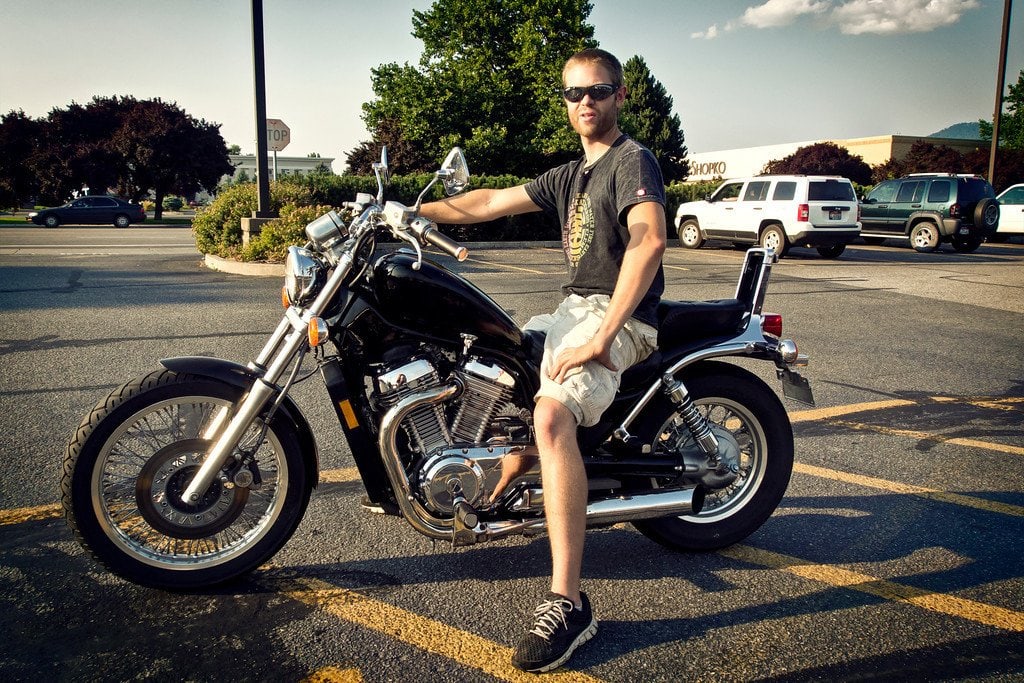 After picking up some food at a nearby gas station, I shouldered by pack and walked over to the next on-ramp under the hot sun. It was located right next to a busy bike path. Lycra-clad cyclists on fancy bikes stared at me as they rode past — curious about what I was doing.

It took an hour for someone to finally stop. And it wasn’t the ride I was expecting.

Daniel pulled over on his 1986 Suzuki Intruder to ask if I wanted a lift into the heart of the city on the back of his motorcycle. Hell. Yes.

Idaho doesn’t have a helmet law if you’re over 18, so I jumped on and grabbed the backrest as we merged onto the highway. It only took a few minutes to travel the 7 miles into town at 70mph.

It wasn’t until we stopped that I learned Daniel was going to school to become a mechanic. Preferring to commute on his bike for the great gas mileage. Plus it’s more fun. 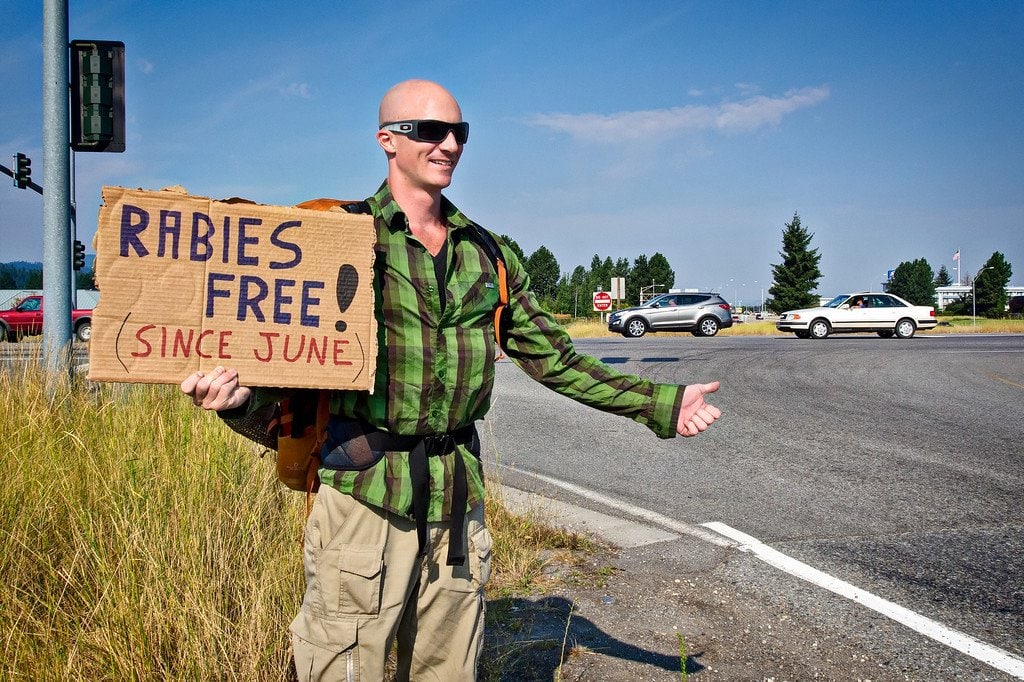 No Sense Of Humor…

Time for a new sign! I began to ask followers on Facebook & Twitter for ideas. Kate McCulley suggested this gem. You wouldn’t believe some of the reactions I received while using funny signs like this…

My conclusion is that there are WAY too many stuck-up pricks with no sense of humor living here in the US. I can’t tell you how many drivers gave me looks of disgust or contempt. I mean, how could you not laugh at this??

Don’t get me wrong, plenty of cars found it hilarious. But most people gave me the evil eye. If I’m hitchhiking, it obviously means I’m the scum of the Earth. Probably a murderer or rapist on parole.

It was fascinating to witness the different reactions. 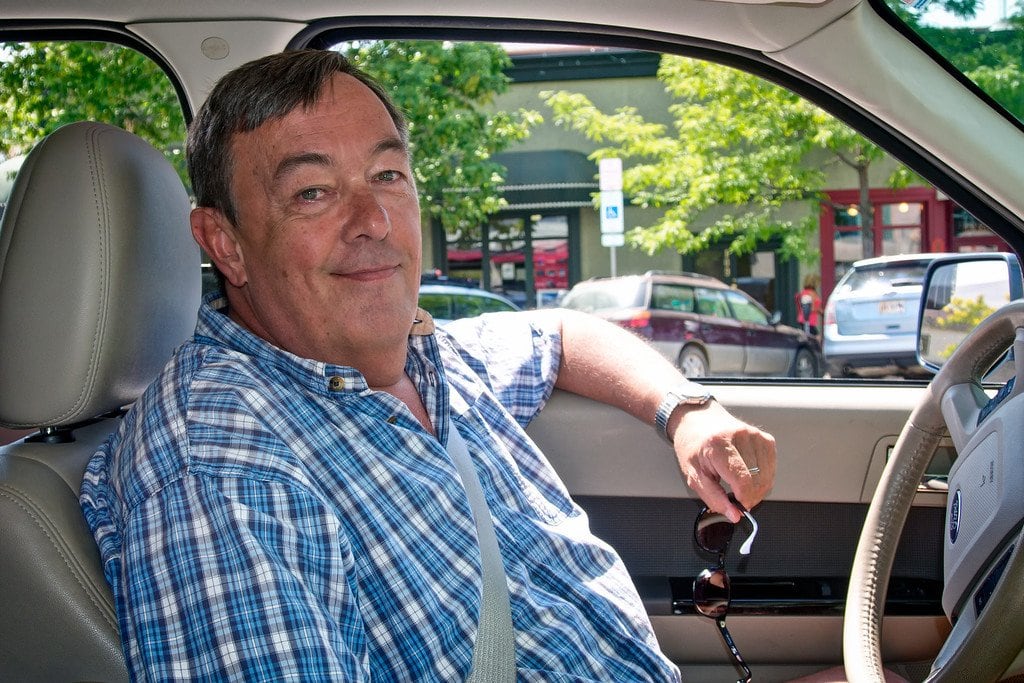 Luckily Dan has a healthy sense of humor. He found the rabies sign so funny that he actually turned around at the next exit and drove back just to pick me up.

Dan is a retired logistics pro who worked for a pharmaceutical company. But his real passion is theater and politics. A former actor for Shakespeare in the Park, pilot, and political organizer. He was in the middle of a road trip out to Montana.

We stopped to see the historic silver mining town of Wallace, ID and he filled me in on the history of the Great Fire of 1910, the largest recorded forest fire in US history.

All together we drove 166 miles to the college town of Missoula, MT. Sick of camping, I decided to check into a Days Inn motel for the night. 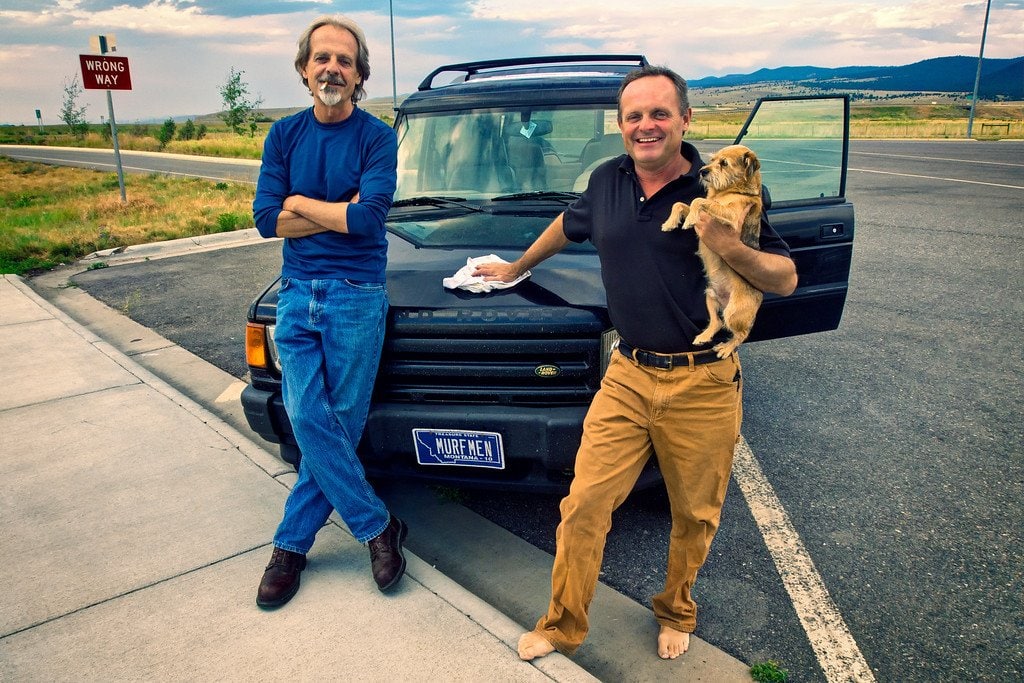 The next day I worked on some projects from inside a Starbucks and walked to a laundromat to wash the grime off my clothes.

In the afternoon I boarded the city bus towards a promising on-ramp. Writing out a sign that simply said “Bozeman”. My next destination.

About an hour later the Murphy Brothers pulled over in their Land Rover. On their way back from a job training people how to maintain industrial batteries, they were heading through Bozeman on the way to Livingston, Montana.

In the back of the truck, I met Mojo, the little dog who made himself comfortable in my lap for the 3 hour ride. We were flying down the highway making great time at 90mph. Driving along large open ranches and winding through steep mountain passes.

The Murphys are funny guys and kept me laughing most of the journey. 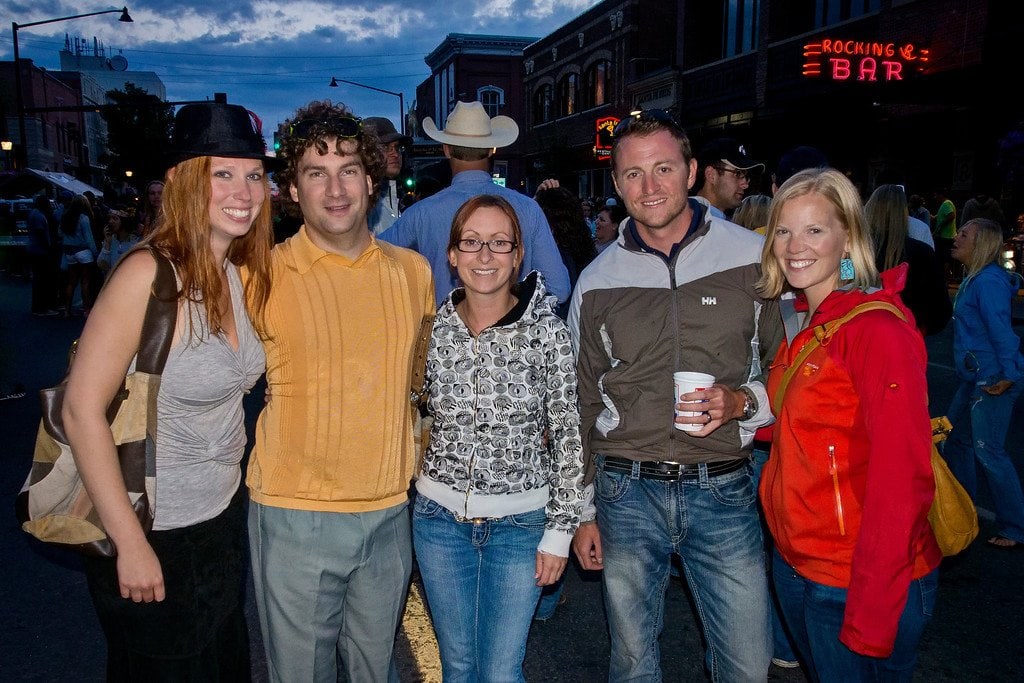 Bozeman is where I went to college for Business & Economics at Montana State University. So I was excited to stop in and say hi to some friends I hadn’t seen in a long time.

Lindsey let me crash in her spare bedroom for the night, and we all went out the next evening, meeting up with my friends Chad, Ryan, and Rye. I was a house-music DJ in college, and these guys would always come out to dance at our shows.

Ryan & I worked together as lifeguards & swim instructors at the public pool too. Such great memories!

Bozeman closes off Main Street once a week during the summer for Music on Main while local bands play and people drink craft beer, stuffing themselves at the food carts.

After the festivities I was handed off to Ryan & Rye for the night, waking up the next morning ready to continue my hitchhiking trip, but sad to leave our little reunion so quickly.

Being back in the mountains of Montana reminded me of how much I love the Gallatin Valley & the people who call it home. ★