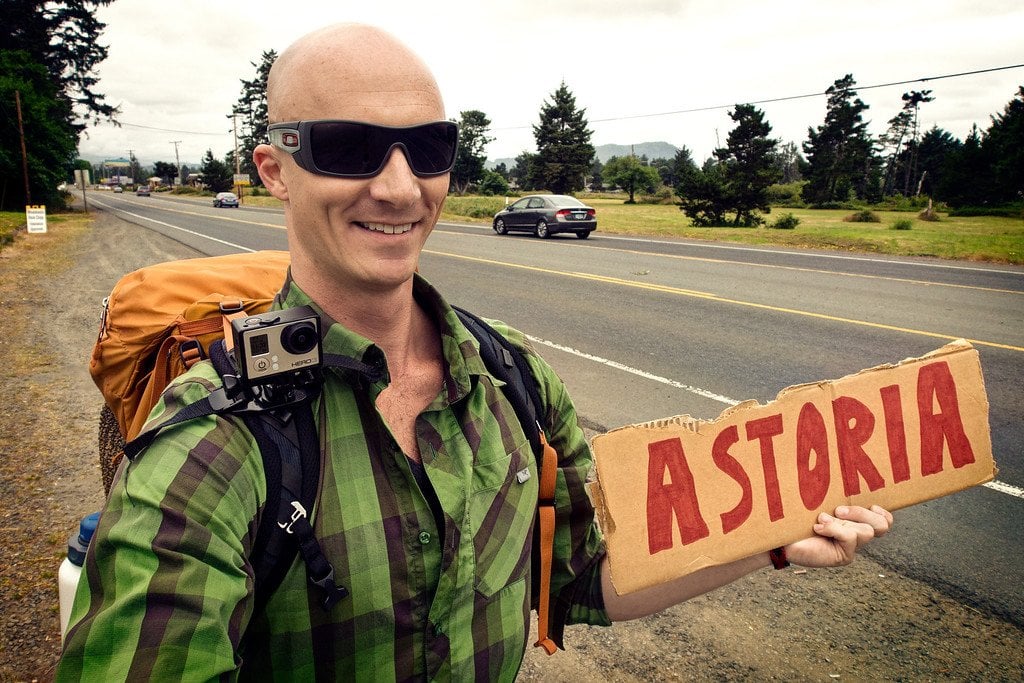 Day 1 of my cross-country hitchhiking journey begins as I strap on my pack and walked to the edge of Seaside, OR. It was chilly and overcast outside. I grabbed a piece of old cardboard from the hostel I slept at the night before and sat down in a field to sketch out a road sign.

There wasn’t much space, so I simply wrote out the name of the town I was headed to in big red block letters. Astoria, Oregon.

I stood on the side of Route 101 — the sign in one hand, my thumb out with the other. Attempting to look as friendly and sane as possible while smiling to passing drivers. And pass they did. Over, and over, and over again. 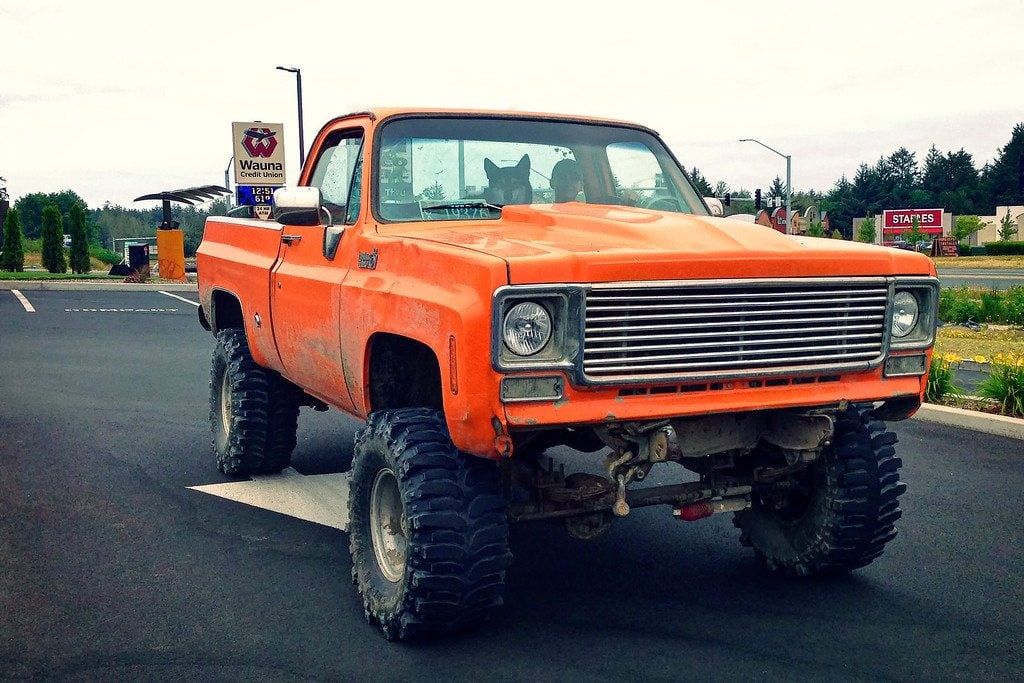 About 20 minutes into my wait, a giant orange 1976 Chevy finally skids to a stop in a cloud of dust behind me. I jog up to find a young woman named CJ behind the wheel. Beside her on the bench seat sits Titan, her super friendly 5 year old Husky mix rescue dog.

CJ lives in the area, and was heading to the town of Warrenton, about 11 miles away. She could drop me off at a good intersection there. She told me she doesn’t usually pick up hitchhikers, but I looked pretty normal.

She’s also done some hitchhiking in the past herself. CJ spent a few months camping in the Montana wilderness around Glacier National Park when she was younger. 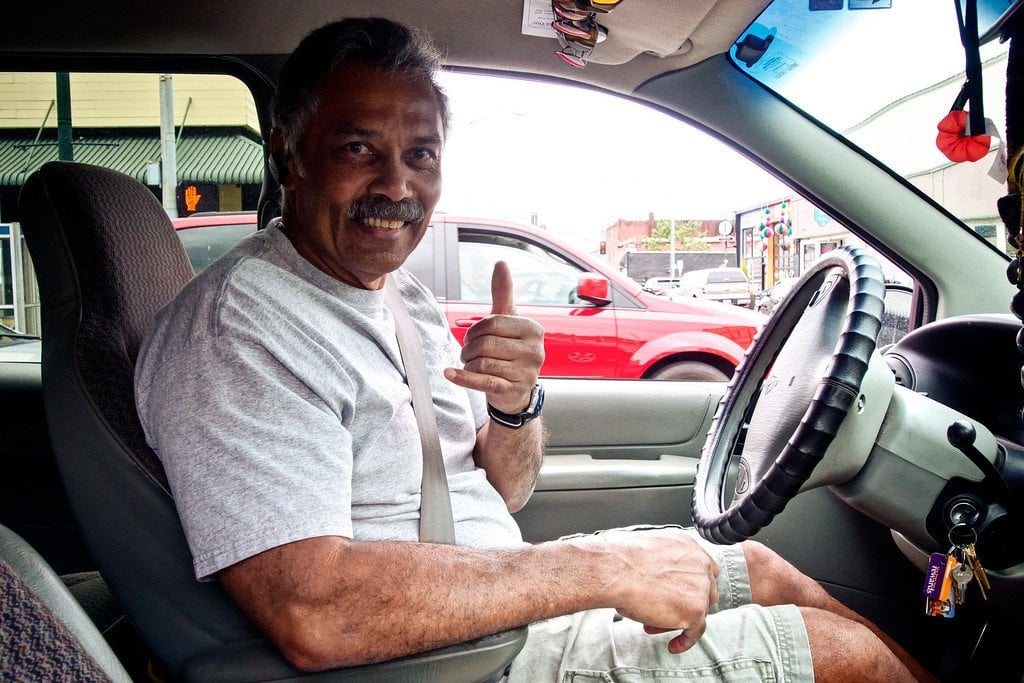 From Warrington, I threw up my same “Astoria” sign and quickly landed a ride from Bruce only 5 minutes later. He’s a recently retired paper-mill worker who’s family is originally from Hawaii. We chatted about things to do around Astoria while driving into town.

In addition to the Goonies House, he recommended I check out the view from the Astoria Column. Bruce dropped me off in the center of town near a coffee shop where I could recharge my gadgets and get some work done. 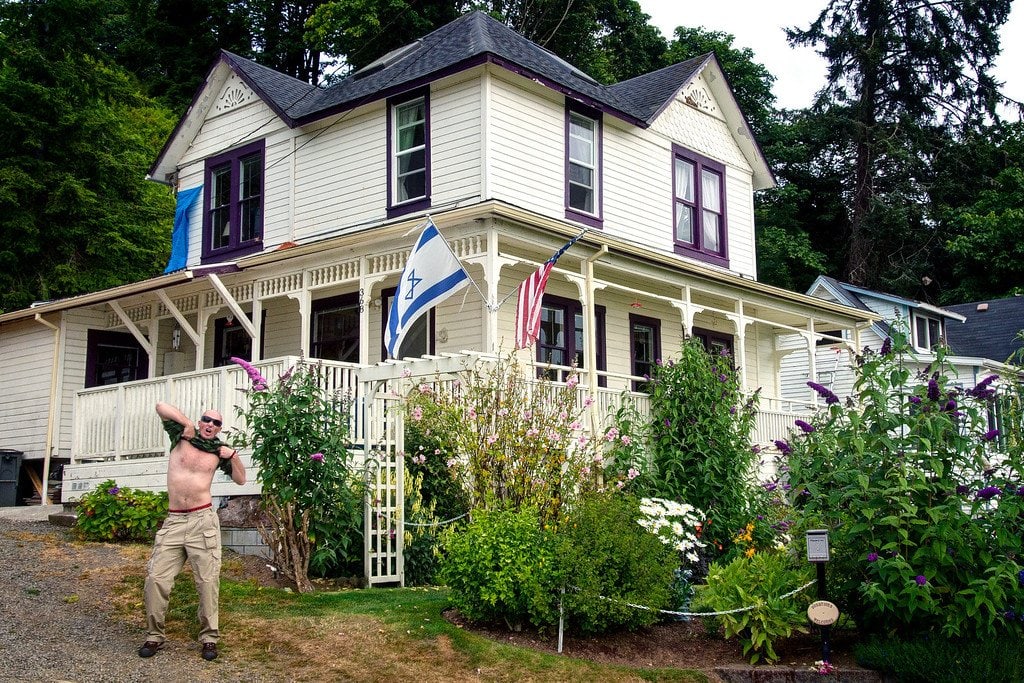 Dancing the Truffle Shuffle at the Goonies House

Astoria is where the Steven Spielberg film “The Goonies” was filmed. One of my favorite movies of all time! Because it was so close, I couldn’t possibly head East without stopping by for a quick visit to the famous Goonies’ House and dance Chunk’s Truffle Shuffle out front.

The city has a long history of fishing and shipping industry via access to the Columbia river, and you can still see plenty of giant cargo ships loaded up with timber, cars, grain, and other goods as they pass back and forth along the river to Portland. 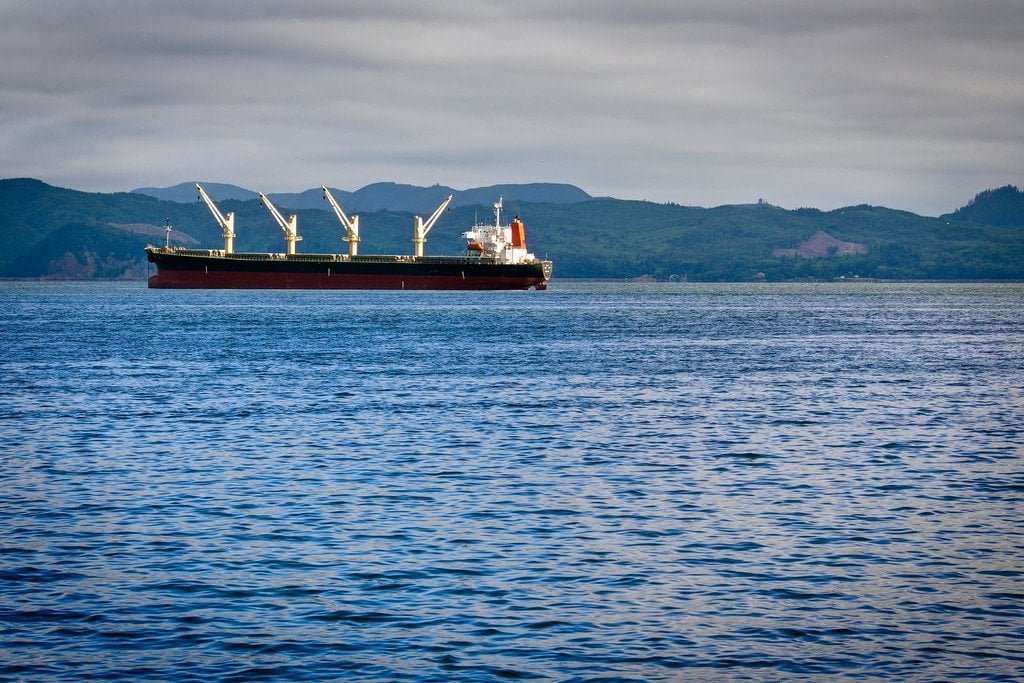 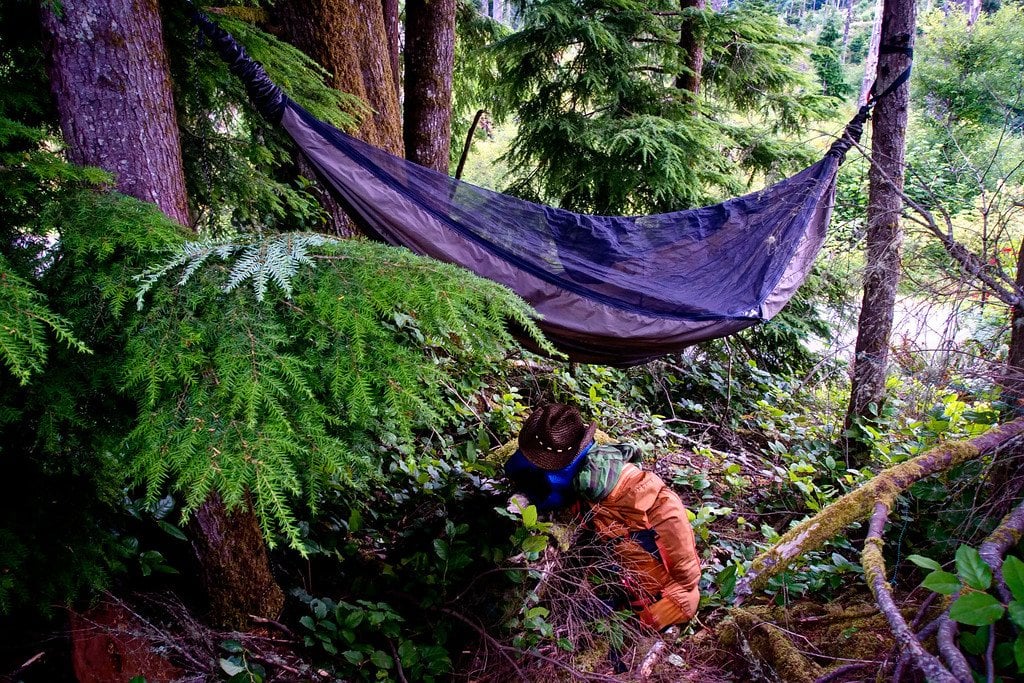 My Luxury Accommodations for the Night

Stealth Camping in the Woods

After a day of exploring Astoria and working a bit, I decided it was time to find a place to camp for the night. So I walked up into the wooded area near the Astoria Column around sunset and searched.

But the forest out here was pretty damn thick with vegetation and thorn bushes, so it wasn’t easy to find a place. Even with my awesome camping hammock. 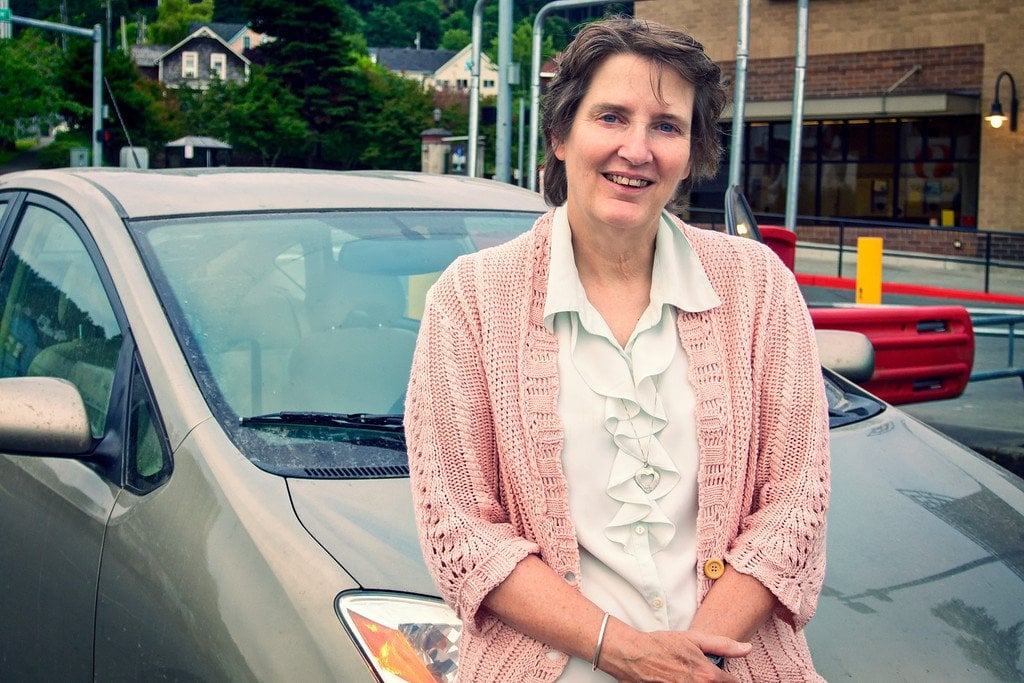 After my night in the woods, I hitched a short ride back into town with Laurie. I only had to wait for 5 minutes. Laurie is the Director of Nursing at Clatsop College in Astoria. She immediately told me she NEVER picks up hitchhikers…

So why did she pick me up in the early morning on the side of the road in the middle of a forest? Apparently I don’t look like a drug addict.

Plus she has a few of her own hitchhiking stories from her 20’s while backpacking around New Zealand. She wanted to help out a fellow adventure seeker — so she dropped me off at Safeway where I bought breakfast.

She easily would’ve brought me farther if I’d asked her to. 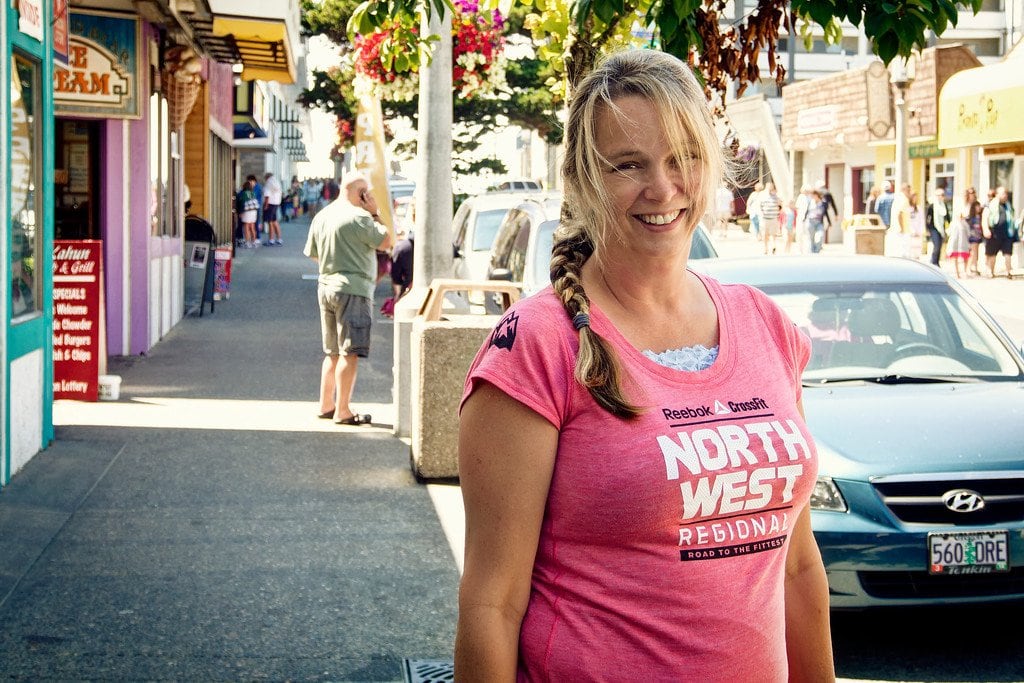 Next it was time to get out of Astoria and head South back to the town of Seaside. After walking to the edge of town, I picked a busy spot with a large parking lot for potential rides to pull into, threw up a new cardboard sign and stuck out my thumb.

This time it took 25 minutes before anyone stopped. Still not too shabby!

Susan’s car was loaded up with a bike on the trunk and a few giant hula hoops in the back seat. Before I could get into the car, she made me promise I wasn’t going to murder or rob her.

Susan is a medical records auditor from Tacoma, WA and was on her way to Seaside for a short vacation. She’s a big hula-hoop fan, and actually makes her own out of PVC pipe!

We decided to eat lunch together at Norma’s Seafood & Steak when we arrived in Seaside. The clam chowder at Norma’s was excellent! 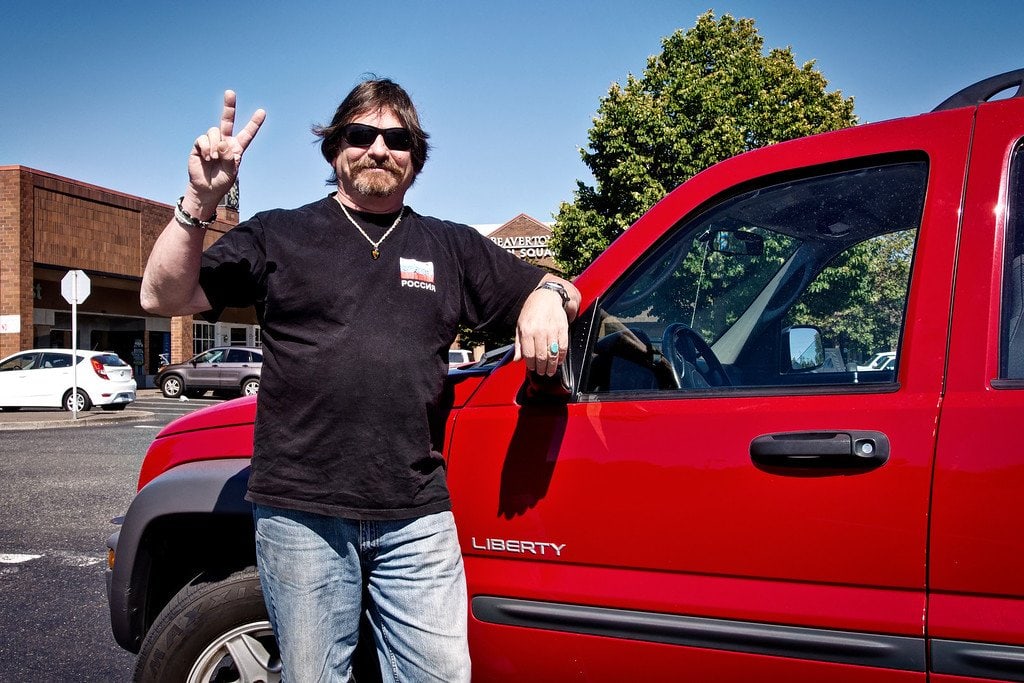 After splurging on a hotel room in Seaside and finally taking a shower, the next morning I walked to a gas station and found some cardboard in a dumpster for my sign. Again it took 25 minutes before someone pulled over.

It’s interesting to witness the reactions different people have as they drive past you. Some smile and wave, others look sorry they can’t pull over (full car, not going far, etc.). Many quickly look away like they’re ashamed or disgusted with you.

But when Scott pulled over in his shiny red Jeep Liberty, he offered to bring me all the way to Beaverton on the outskirts of Portland (a 1.5 hour drive) where he was visiting his 20 year old daughter.

Scott was full of great stories. He spent a few months in prison for causing a bad car accident when he was younger, went on a hitchhiking journey up the West coast to Canada, worked as a salesman most of his life, and is currently writing a children’s book.

Oh, and he almost died when his heart failed at a Pink Floyd concert.

In Beaverton, Scott bought me hot wings and a few beers at Wingstop, where he also proceeded to kick my ass. In video trivia. Then he dropped me off at a metro station so I could take the light-rail into Portland. ★