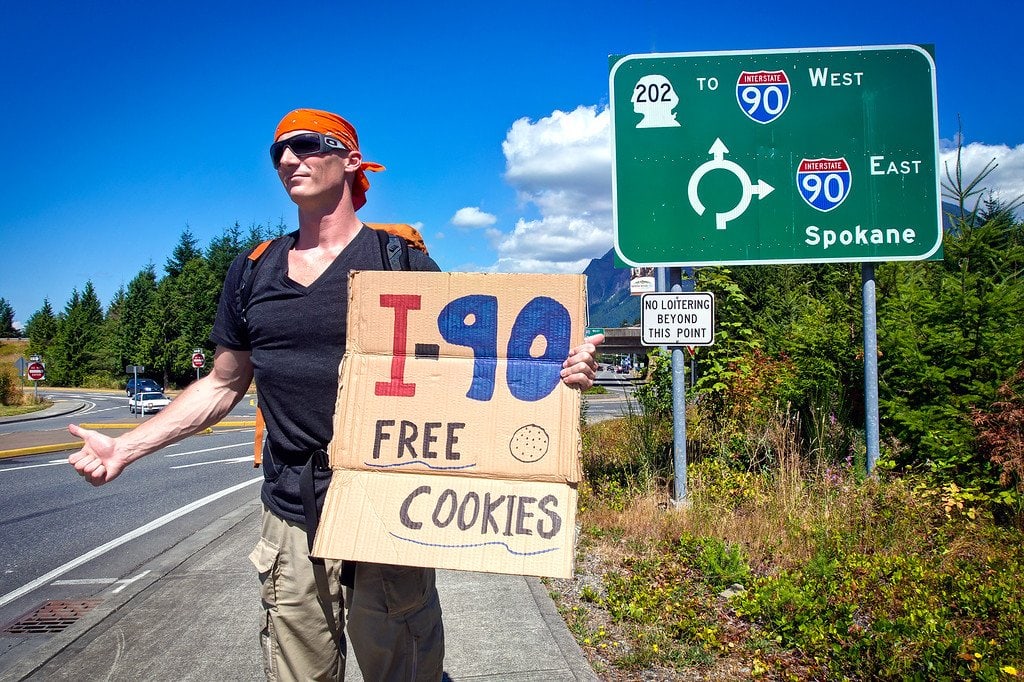 Hitchhiking America: Would You Pick Me Up?

My hitchhiking adventure speeds up as I randomly run into old friends, make some new ones, and discover pancake sandwiches. The best invention ever.

Day 11 of my trip across the United States starts with a bus ride out of Seattle. Trying to hitchhike directly out of cities is difficult, as urban on-ramps rarely have a decent spot for cars to pull over, traffic is moving fast, and many people are only traveling a short distance.

So I often use public transportation to get away from any metro areas.

Taking the city bus out to Issaquah, I soon discovered that the exit I’d chosen was just as bad as in the city. There was no shoulder for cars to pull over on, let alone room for me to walk out there safely, forcing me to stand around with my cardboard sign at a small gas station nearby.

But after 3 hours and no luck, I walked back to the bus stop and asked a driver to take me to a better area. 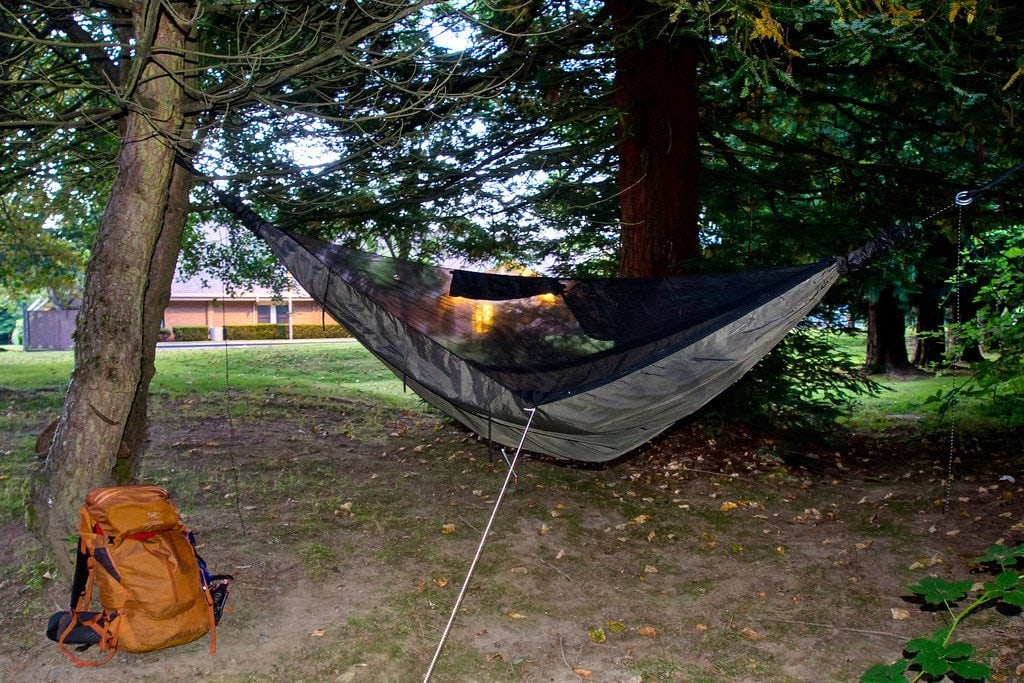 Camping Behind a Mormon Church

Camping Behind A Church

Arriving in the town of North Bend, I decided to spend the afternoon working inside a McDonalds using their free WiFi. I’d attempt to find a place to camp for the night later. Google Maps is great for this!

The satellite view lets you easily scope out potential urban camping sites nearby.

Churches are often decent places to camp. Not many people hang out there in the middle of the night, and a church is apt to be a bit more lenient with trespassers than a business or private residence would be.

I discovered a Mormon church located only a few blocks away. Perfect. I just hope trespassing isn’t considered a sin… 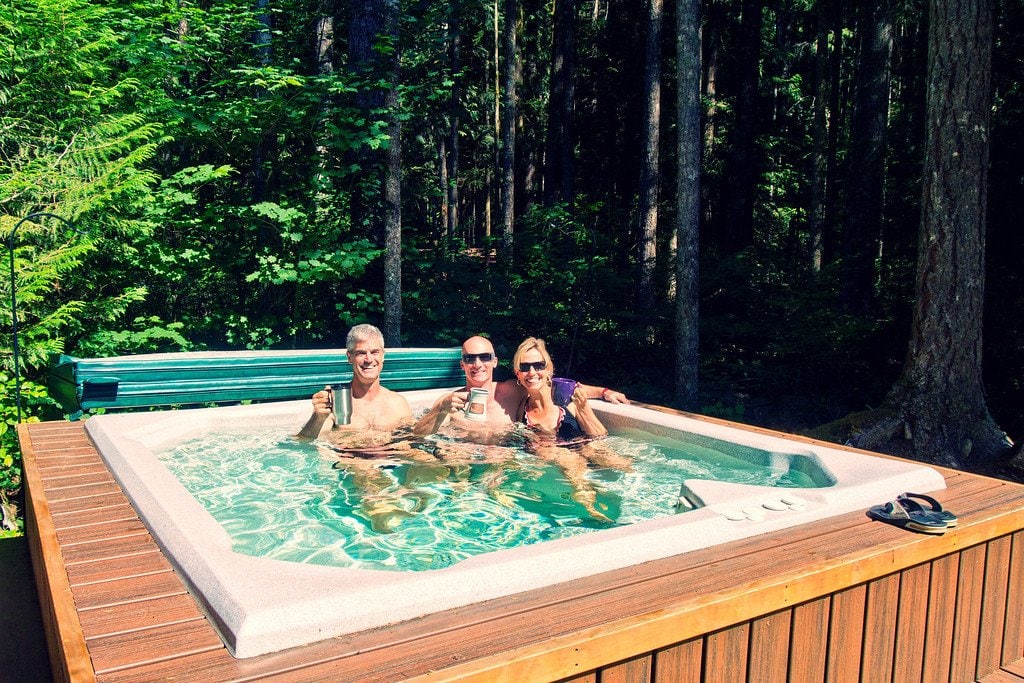 It’s A Small World After All!

Once I was safe & snug in my camping hammock, a truck suddenly pulled into the parking lot. I was afraid I’d been spotted. Luckily they didn’t seem to see me hidden in the trees, and drove off a bit later. However the following morning I learned it was actually a friend of mine…

It seems Laura discovered I was in their hometown completely at random when she happened to check out the live tracking map I’ve been using. She sent her husband Ted out to find me & offer a place to crash… it was his truck I saw at the church!

They invited me to breakfast in the morning, followed by a relaxing soak in their hot tub while enjoying some fresh coffee. Oh, and they also packed me a tasty lunch plus a bag of gourmet cookies to bribe my way into the next car. 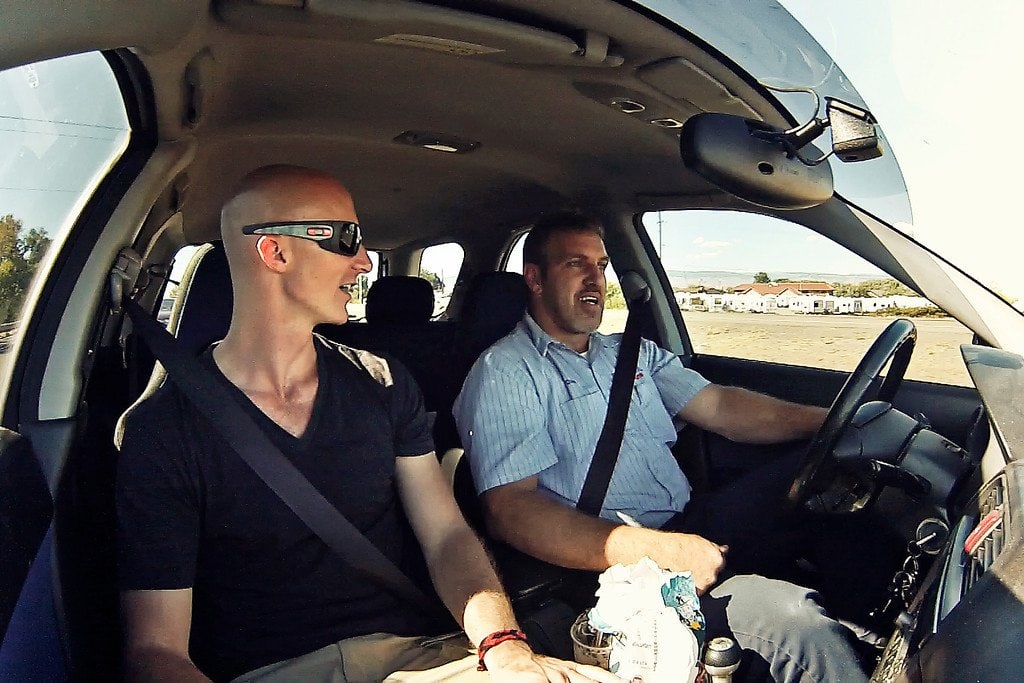 Making sure to write “Free Cookies” on my cardboard road sign to entice someone to stop, I waited along the I-90 East on-ramp for about an hour as at least 50 cars passed me. It was Dave who finally pulled over in his Subaru WRX.

You think your daily commute is bad? Dave’s drive is 2 hours! He’s a plumber & AC repair guy — who makes as much money as some doctors do. When he was younger, he hitchhiked from Florida to Boston.

But these days he’s providing for his 8 kids (that’s not a typo), hunting for elk or fishing for salmon with his free time. He drove me 79 miles through Washington’s beautiful Snoqualmie Pass to the town of Ellensburg.

I spent a few hours attempting to hitch out with no luck, and set up camp near a Flying J truck stop that night. They make some good chili! It comes with a massive brick of corn bread. The WiFi at the truck stop was good and strong, so I actually had a signal from my camping spot 1/4 mile away using the Alpha WiFi antenna. 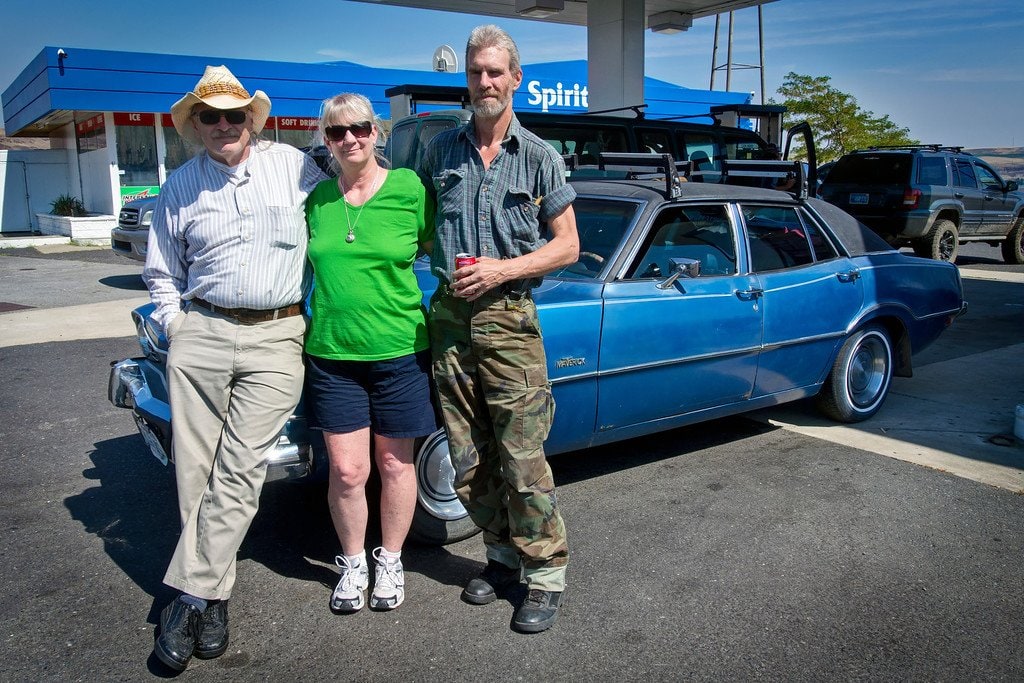 In the morning I spent an hour outside with my sign when Paul, Trina, and John called me over from a restaurant parking lot. While eating breakfast they’d been watching me attempt to hitch out with no luck — and decided to offer a lift in their classic 1973 Ford Maverick.

We cruised East past a giant wind farm as the landscape became dry, barren, and hot. Hazy smoke from a wildfire nearby filled the air.

Often when you’re hitchhiking the driver wants to talk a lot. But some people are perfectly happy to enjoy some silence.

Paul & John are brothers and both work as car mechanics. They actually own a collection of old Mavericks. We didn’t talk much though, which was actually nice for a change. Trina handed me a can of Coke and a few small packages of Cheese-Its for ride.

They dropped me off about 29 miles later at a gas station in the town of Vantage alongside the Columbia River.

Vantage Bridge on the Columbia River

Stranded in the Sun…

There’s a beautiful bridge that crosses the Columbia River at Vantage, and a petrified forest too. The only problem is not many people stop here.

I quickly learned it wasn’t the best place to hitch a ride out of.

After 2 hours standing under the blazing hot sun, only 10 cars had passed me. My hitchhiking prospects weren’t looking good here. I began to believe I’d be stranded in Vantage for the night…

But then I was saved by the inventor of The Ultimate Pancake Sandwich. 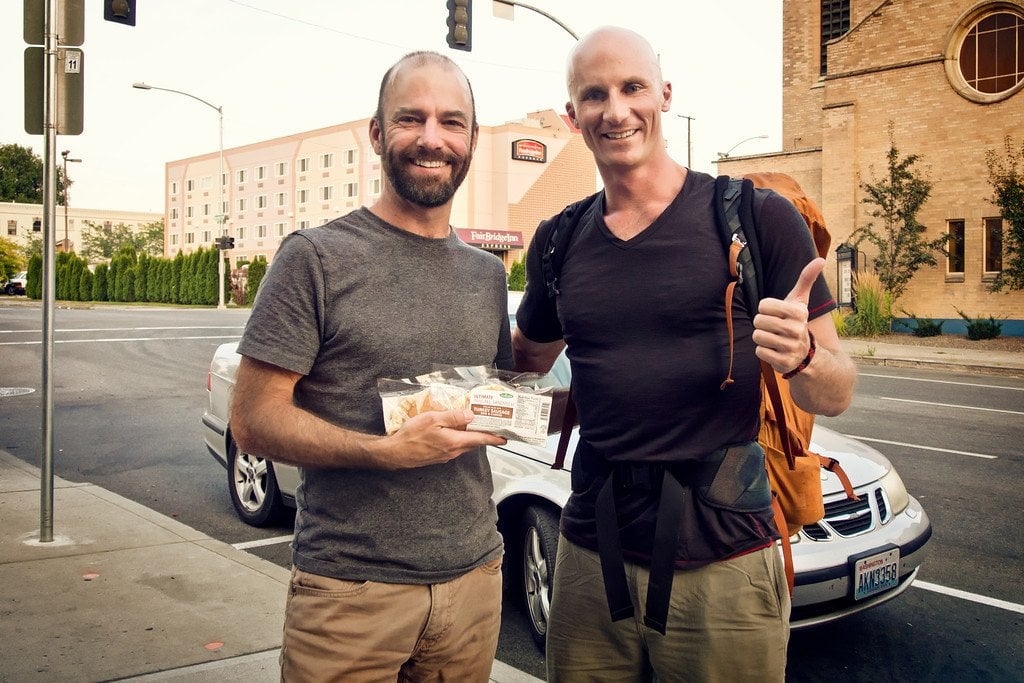 John is from Seattle. He was on his way East to Idaho for business. What kind of business? The pancake sandwich type of course!

He owns a company that created The Ultimate Pancake Sandwich.

I totally scored with this ride.

Our world needs a microwaveable breakfast sandwich that’s actually tasty and made with fresh local ingredients. F*ck Hot-Pockets, the Ultimate Pancake Sandwich is quick to prepare, not messy to eat, and tastes fantastic!

But to prove it, John loaded me up with a few of his epic creations to taste-test for myself.

The 2-hour drive to Spokane flew by as we talked about social media, following your dreams, not obsessing about things in life you can’t control, and international travel.

John’s never hitchhiked before but picks up hitchhikers often. This guy has plenty of good karma coming his way in the future. Keep an eye out for his delicious pancake sandwiches in a supermarket near you! ★