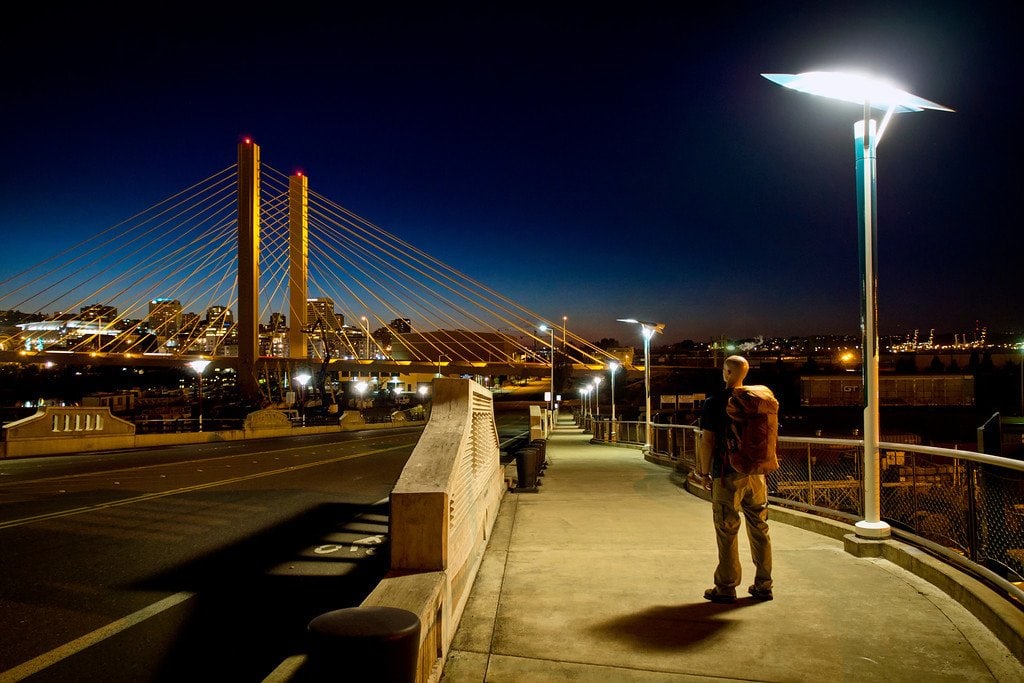 On my way through the state of Washington I hitched a ride on a bicycle, couchsurfed in Seattle, and was invited to a fairy festival in the woods.

Day 8 of my cross-country hitchhiking adventure begins with me rolling out of bed at Motel 6 after hopping a freight train from Portland the night before. My mission was to get to Seattle by nightfall.

I stopped by the Subway shop in Kelso, WA to grab a sandwich as well as some fresh cardboard for a new road sign. The ladies working the counter surprised me by handing over a bag full of the previous day’s cookies — twenty of them in total!

While sitting down to write out “Seattle — good stories” on the cardboard with a Sharpie, a man named George strolled over and offered to buy me a train ticket directly there…

I explained to him that I wasn’t destitute, and was hitchhiking to meet cool people and have an adventure. Just more proof of my theory that most people around the world are kind & generous. 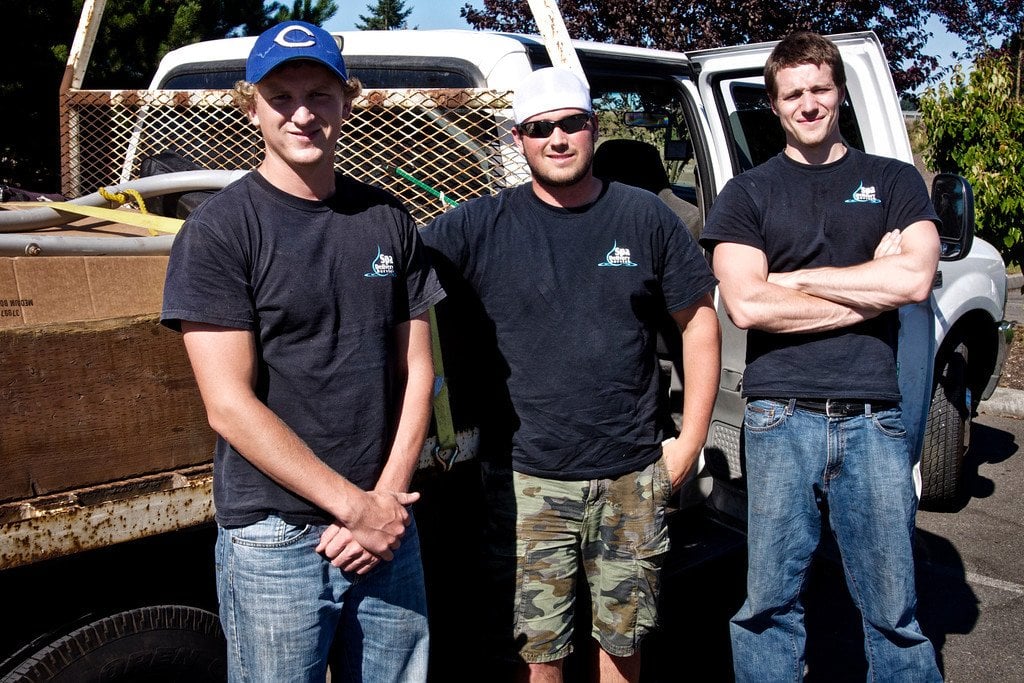 Another pleasant surprise interrupted my morning when Bret offered to drive me 47 miles North to Great Mound, WA. Not all the way to Seattle, but better than nothing!

He saw the cardboard sign and overheard my conversation with George, so it wasn’t even necessary to leave Subway to locate my next lift.

Bret was on his way back from a hot-tub delivery in a work truck with 2 other guys, Trevor & Shaun. In their free time the three of them fished, hunted, rode dirt-bikes and wake-boards. 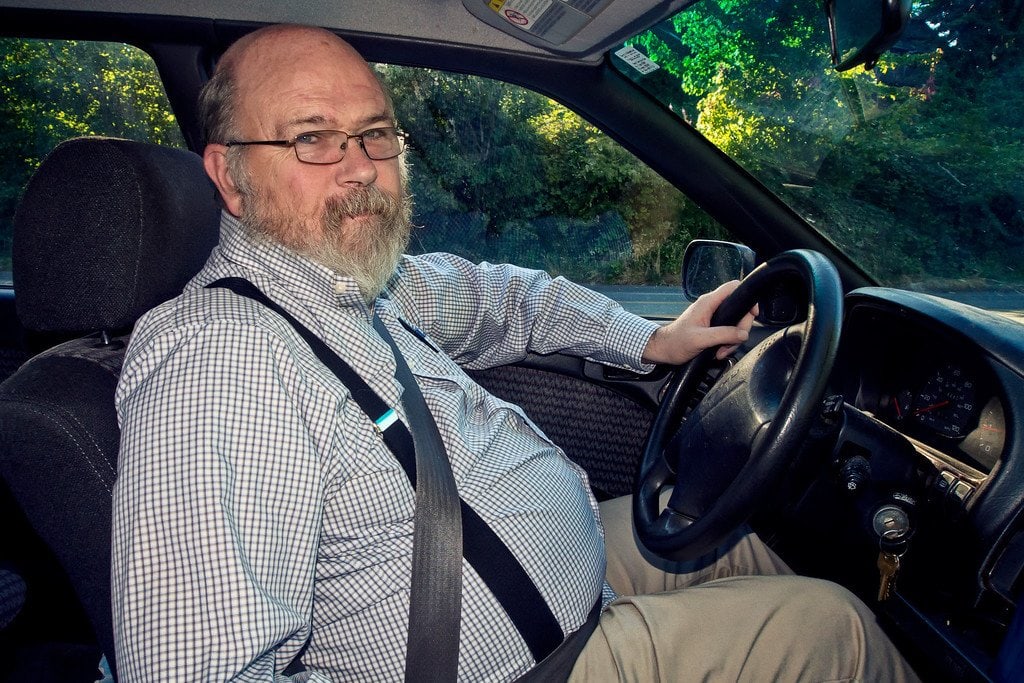 Now it was time to see how well my Seattle sign would work. Standing in the glaring sun at the side of an on-ramp for I-5, John picked me up after a 30 minute wait. Not bad!

John’s thumbed his share of rides around the United States in the 70’s. He estimates a total of about 8400 miles. Plus a few long-distance road trips in a school bus with a group of hippies.

These days he’s a computer technician working for the small Chehalis Native American tribe. He drove out of his way to leave me at a better exit for hitching my next ride. 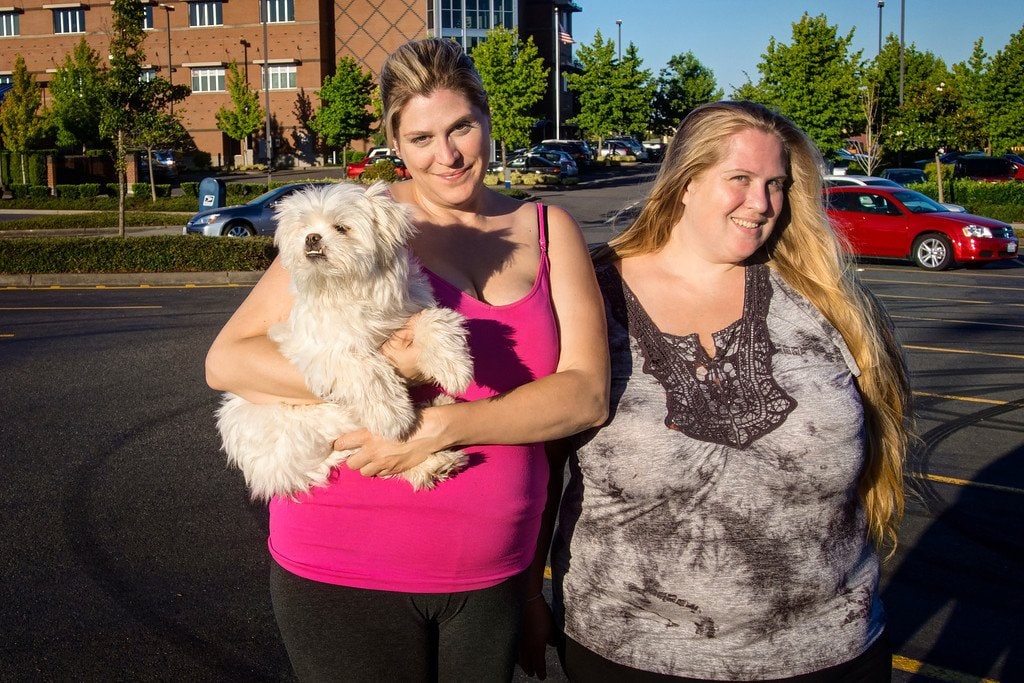 I wasn’t even holding up my sign when Wendy & Christine pulled over in their Honda minivan 15 minutes later. I jumped in back and was attacked (with love) by their little dog Tucker and his hilarious underbite.

They weren’t going far, just up the road to Walmart to pick up a tent for the Faerieworlds Festival that weekend…

Oh, and by the way. Would I like to join them? It’s just a crazy 3 day party in the woods where everyone dresses up as faeries…

Now normally I’m pretty open-minded about stuff like this. But I’d have to commit to 3 days, and I’d just spent 4 days in Portland. My hitchhiking trip thus far was moving a bit slowly, and I was feeling a push to move faster.

So I reluctantly declined their generous offer. 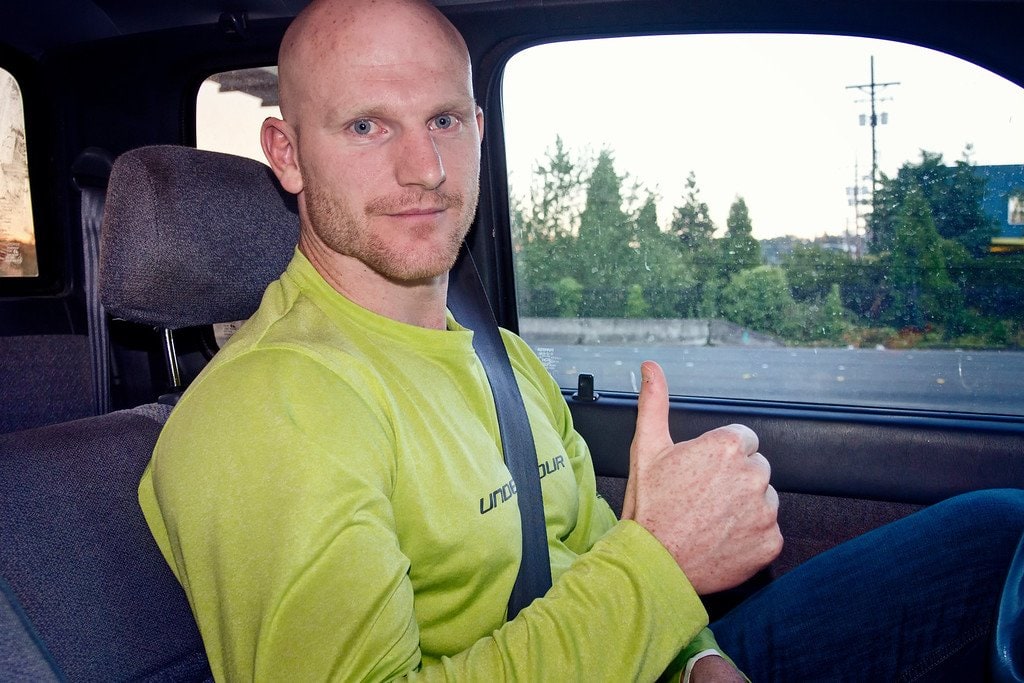 I walked out to the highway on-ramp in Lacey, WA and threw out my thumb once again until Nan stopped in his pickup truck after about 40 minutes of road-side rejection.

Nan is an ex-Marine who’s working as a gymnastics instructor and personal trainer. He spends his free time training in mixed martial arts. We had a good conversation about false first-impressions and what life in the military is like.

He dropped me off in Tacoma, WA. I soon learned how difficult it can be hitchhiking out of cities when after 2 hours of waiting I received no lifts.

A few different police cars passed me, some more than once. But none of them stopped. Eventually ,the sun fell below the horizon and I walked to the nearest local bus station. No one picks up hitchhikers after dark. So I purchased a $3.50 ticket to Seattle and spent the night at a hostel. 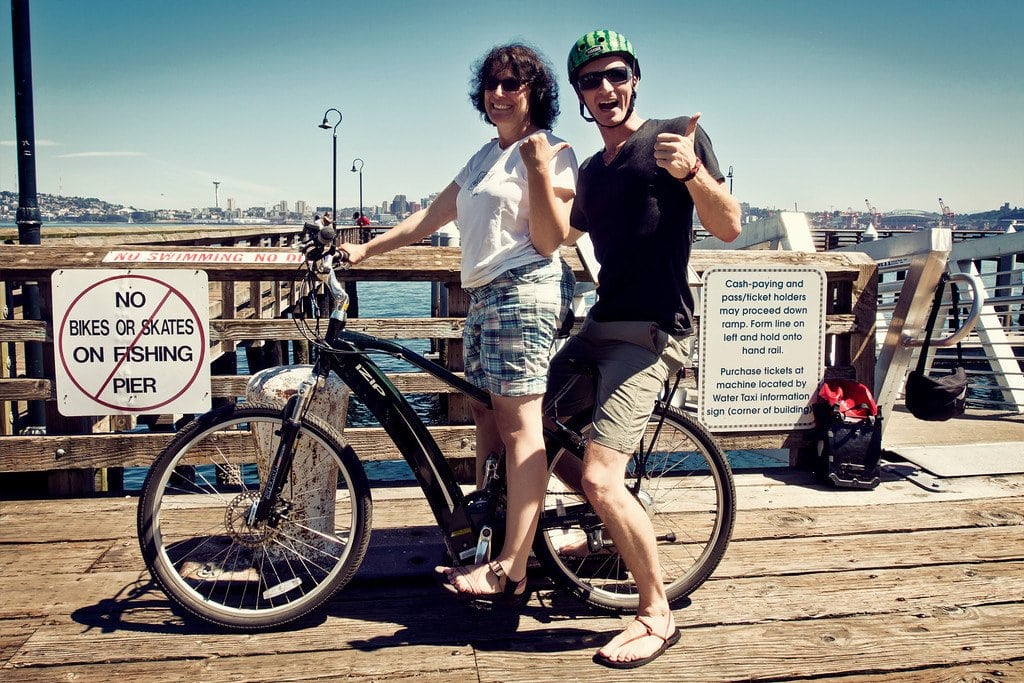 The next morning I got some work done before meeting up with my friend Pam from Nerd’s Eye View for breakfast. She’s a talented writer and ukulele rockstar.

The ferry ride over the bay to West Seattle was beautiful. We chowed down in the sun at Ma Kai, a Hawaiian restaurant on the pier. My tasty Korean fish taco and a giant Spam Musubi hit the spot!

Then Pam was kind enough to give me a tour of the area on the back of her bicycle. She even offered to lend me her sweet-looking (literally) watermelon helmet. Safety first…

Ok, so we only traveled about 5 feet before we realized it wasn’t going to work. But hey, when you’re hitchhiking, every mile (foot?) counts. 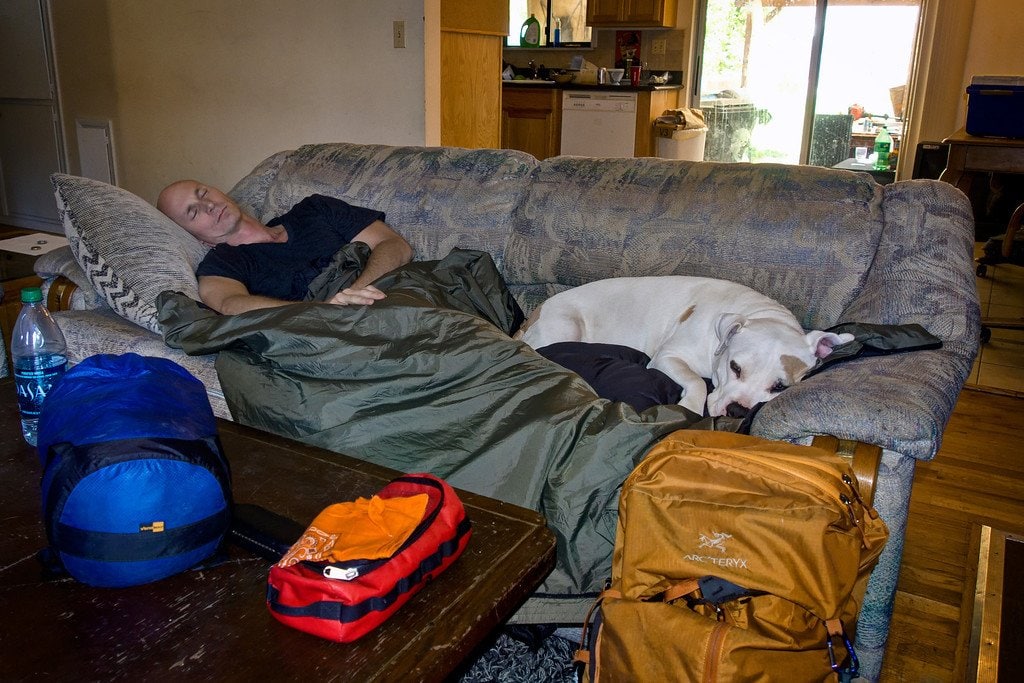 Who’s this Stranger in My Bed?

All the hostels and cheap motels in the area were completely booked up that weekend for the Capitol Hill Block Party. While I’m a big fan of not over-planning your travels, sometimes it backfires.

No worries. Social media to the rescue! I jumped onto Facebook & Twitter to ask for a couch to crash on, as well as throwing up a last-minute couch request on Couchsurfing.org. Soon the offers came rolling in.

I decided to stay with an old friend from my college days in Montana. Justin is a talented breaks music producer and bartender in Seattle.

We spent the evening at a wild underground warehouse party, complete with 12-foot tall scantily-clad women on stilts before I finally crashed out on his couch for the night.

When I awoke, there was a complete stranger named Deja between my legs. I don’t remember exactly how she got there.

She left without giving me her number either… what a b*tch! ★