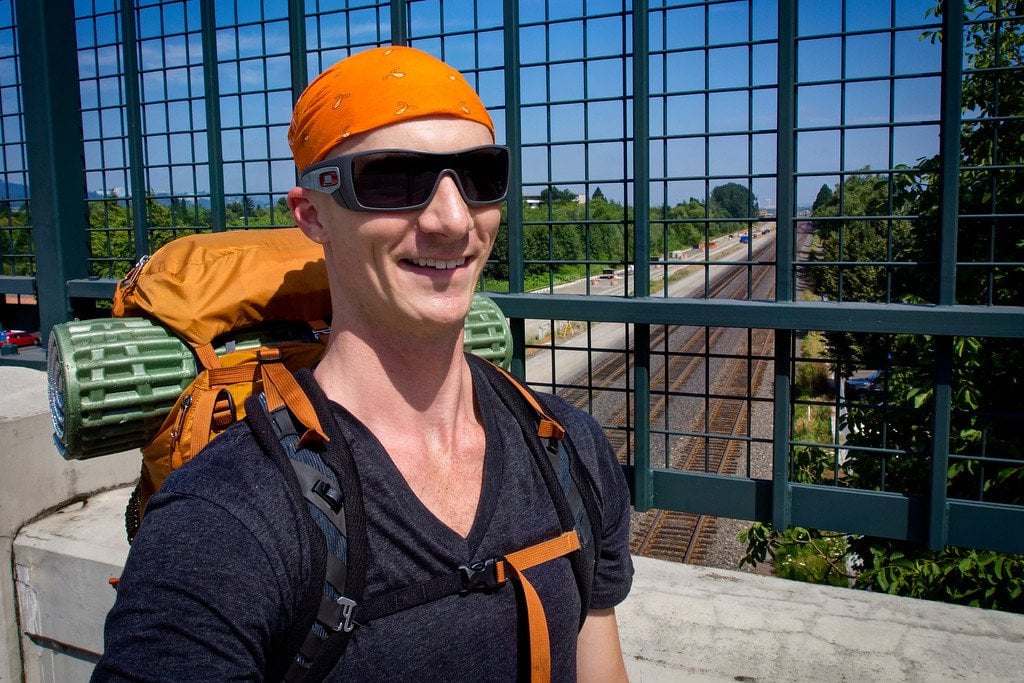 Initially I was planning to head East, but wound up hopping a freight train out of Portland that took me North instead. This is how it all went down…

Day 5 of my cross-country hitchhiking journey across America begins with me tracking down hobos in Portland to learn how to hop freight trains. There’s just something magical about the thought of riding a train through the countryside.

Traveling the rails as many did during the Great Depression. Escaping 20th-century traffic congestion and advertising on the highways to watch the scenery roll past on a set of train tracks. Smelling wildflowers in the fresh mountain air.

Yet a small community of modern rail riders still exists even today.

So I read books, asked questions in obscure online forums, and spoke to a few freight riders in person. Attempting to prepare myself as best I could to prevent getting injured or arrested. Because riding freight trains is pretty dangerous and definitely illegal. 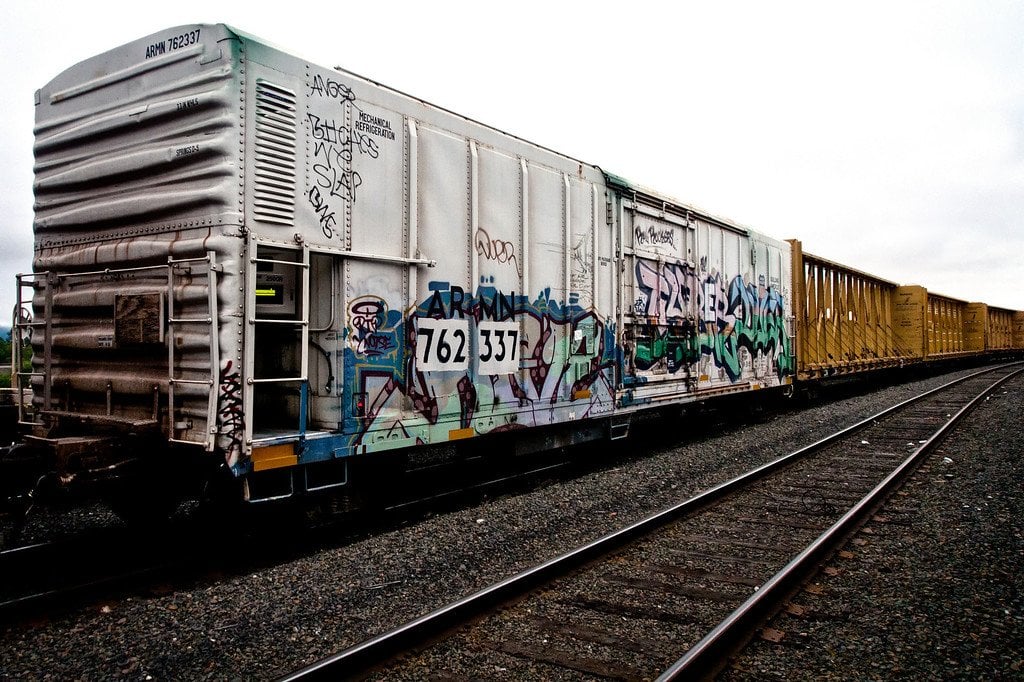 The Refrigerated Boxcar I Jumped Into

The first obstacle is locating where you can even catch a train. They slow down or stop at specific places: inside rail-yards for loading & unloading, at “sidings” (where one train will stop to let another pass), and crew-change points.

Then you have to determine what direction the train is even going. It could look like it’s pointed East, when in reality it may turn South a few miles later.

Next, you need to search for a rideable car. There are a few different types, but some can be downright deadly to ride in if you don’t know what you’re doing. In fact just maneuvering around a stopped or slow-moving freight train can be extremely dangerous.

Of course, avoiding getting caught is also a priority. The rail police (aka “Bulls”) are constantly on the hunt for illegal train riders. This will result in a ticket or even a few nights in jail depending on the location.

Other rail-riders can be a threat too. Drug addicts or criminals may be riding the same trains as you. There is a lot to think about! 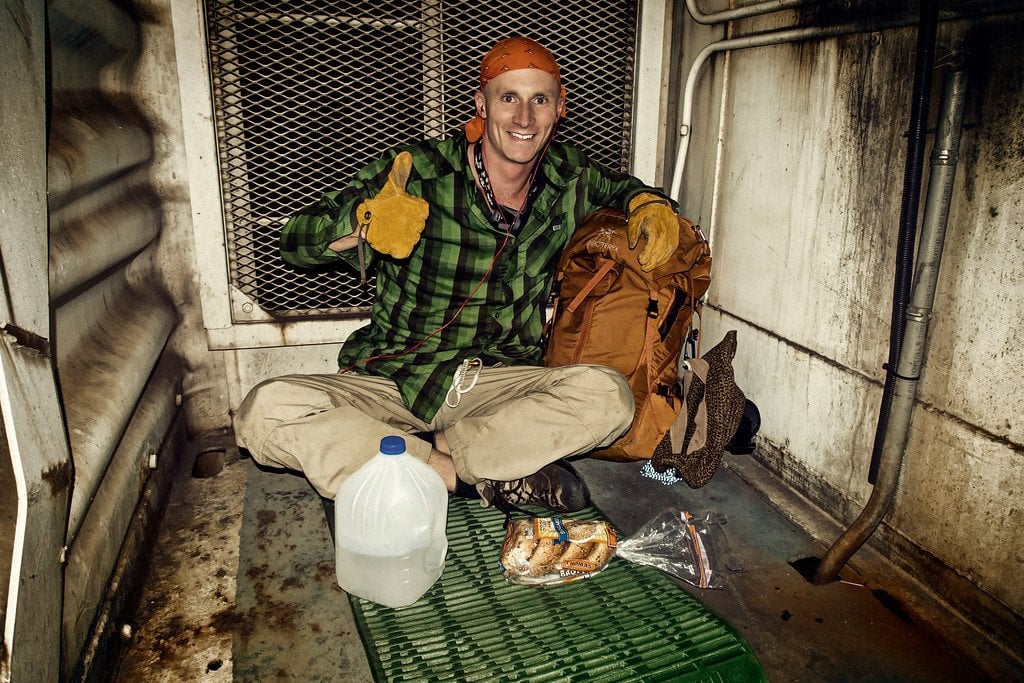 My initial goal was to hop a freight heading East out of Portland. But it took me 3 nights and over 18 hours of waiting on the side of the tracks to catch one — and when I did, it was headed in the wrong direction!

On the 3rd night of attempting to “catch out”, I found some thick bushes and made myself comfortable as the sun began to set. Stuffing my face full of tasty ripe blackberries that grow wild along the tracks. A few trains came by, but they were moving too fast.

It was around midnight (4 hours later) when an opportunity presented itself. A “junk” train began pulling out of the rail yard next-door and onto the mainline where I was waiting.

Hot Shots are loaded with shipping containers full of valuable merchandise. Cars. Electronics. Designer clothing. Each container can easily be packed with over $500,000 of stuff. These fly by at 70 mph.

As my junk train rounded a corner onto the main track, it was only traveling at about 5 mph. Perfect.

I spotted a few rideable cars too. So after rushing up the embankment I began running alongside a refrigerated boxcar (aka “reefer”) covered in graffiti. It was closed, but there’s a small cubby-hole area in the back that houses the refrigeration unit. I grabbed the ladder, jumped up, and squeezed inside with my pack. Success! 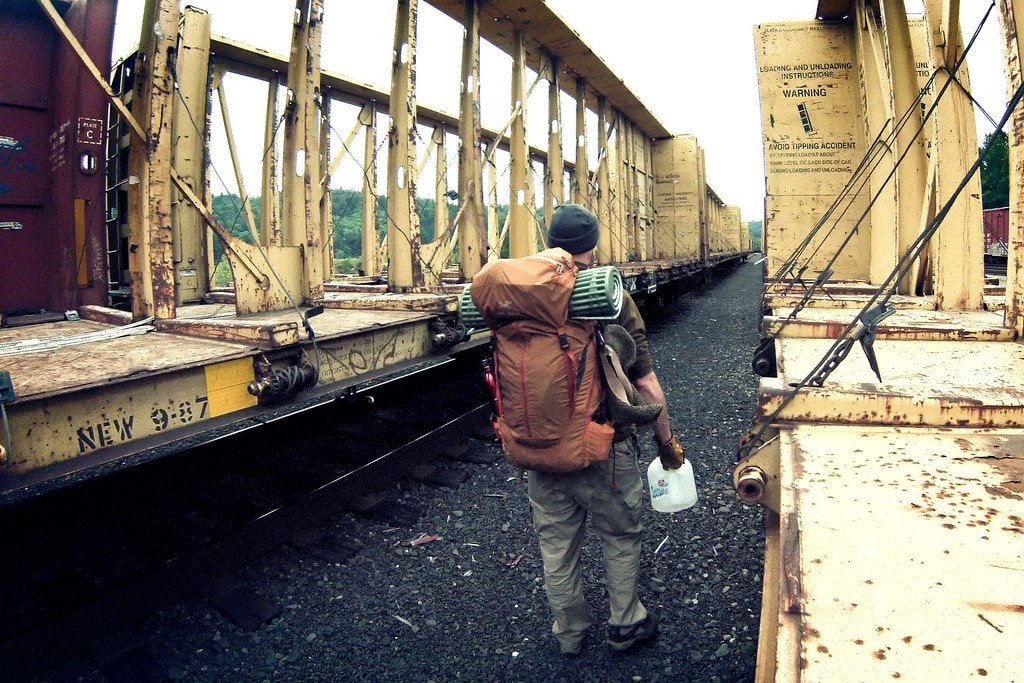 After a few miles the train picked up speed and I made myself as comfortable as possible. The landscape passed by under the glow of a full moon. But my car was very loud. Not only from the grinding steel sound on the tracks, but the refrigeration unit kicked on and off every 30 minutes — so it wasn’t very peaceful until I threw in some headphones and turned on Bob Dylan.

When I eventually checked the GPS location on my phone, I discovered we were headed North instead of East. Whoops! No big deal. I knew there was a chance of that happening.

Because we were headed North, I assumed the train was traveling to Seattle. But after a 3-hour ride, we pulled into a brightly-lit rail yard and stopped.

I was forced to throw a brown tarp over myself & my pack to hide from the yard-workers walking by. After an hour of no movement, I realized that we were not just waiting for a faster train to pass, but this was the last stop.

Running From The Bull

Packing my gear I soon left the safety of the boxcar to search for another train in the yard that would be heading North as the sun began to rise.

But after looking for a while, I made the mistake of climbing out into the open in front of a rail cop’s white pickup-truck about 100 yards away. Shit!

He hit the accelerator and drove right at me. To avoid getting caught, I scrambled back over the train and ran towards him with a mile-long string of cars between us.

Unless he left his truck and chased on foot, there’s no way he’d find me in this maze of trains.

With my adrenalin pumping despite a lack of sleep the night before, I escaped from the yard as quickly as possible and made my way to the roadside.

Covered in train grease and looking like a proper bum, no one would pick me up. So I was forced to walk 4 miles into the town of Kelso, WA.

Once there I splurged on a Motel 6 bed, hot shower, laundromat, and a fat tub of Ben & Jerry’s. My very brief train riding career was now over. ★

[su_note note_color=”#F5DCDC” text_color=”#333333″ radius=”3″ class=””]WARNING: Riding freight trains is very dangerous & illegal. So unfortunately I will not be sharing a detailed “how-to” guide about it. I’m not a professional train hopper, and don’t want to encourage others to try without researching the risks for themselves. The risks are high. I claim no responsibility for your arrest, dismemberment, or death.[/su_note]