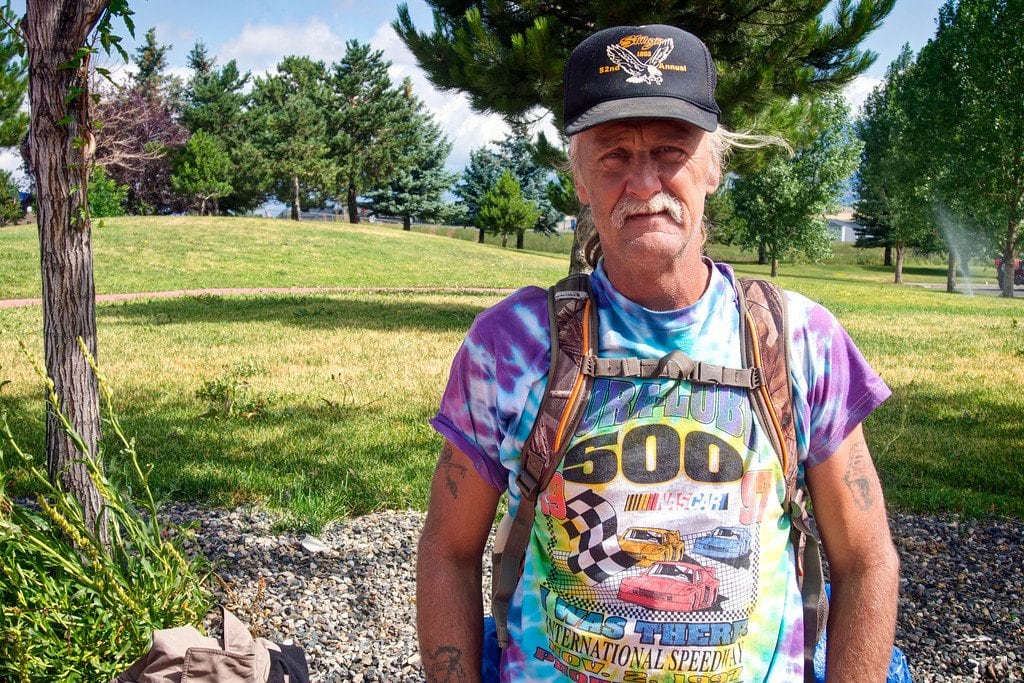 The wild adventure continues as I hitch a ride in a convertible, crash a wedding, shoot some guns, and meet a real hobo in Montana.

Day 17 of my hitchhiking trip across America starts early in the morning. I have a deadline today. An old friend has just told me he’s getting married and wants me to attend his wedding the next day. If I’m able to make it in time.

Walking a mile out to the freeway from Bozeman, I run into Jack the Hobo. He’s hitchhiking across America too. But much slower than I am. He’s heading to California to find temporary work picking fruit. Jack started in Louisiana 4 months ago.

He isn’t homeless though. Jack owns 21 acres in Louisiana. This is just the style he prefers to travel, and he’s been doing it for 20 years.

Travel is an experience for him, not a vacation. 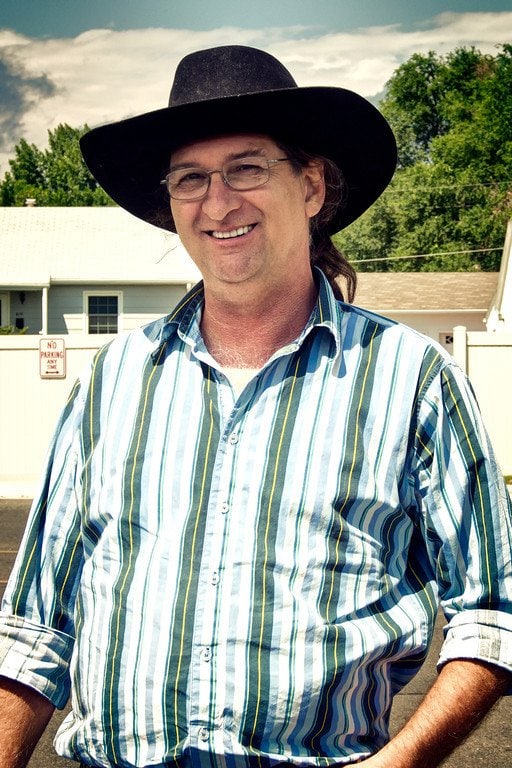 My sign today reads “Never Pick Up Hitchhikers”. A little reverse psychology! It works too, when 30 minutes later Chuck pulls over in his Kia Forte sporting a giant black hat and fancy cowboy boots. He’s heading to Billings, MT which is very close to where the wedding will be held.

Chuck buys cattle for a living. And apartment buildings. Not for himself, but as investments for his wealthy friends. He got into it after meeting some of the millionaire ranchers who call Maui home while working at a country club there.

He’s met quite a few celebrities too like Willie Nelson, Owen Wilson, and Woody Harrelson. When he lived in Seattle, he once let a junkie kid play his guitar for a bit, a few weeks later discovering the kid was the lead singer in a new band called Nirvana… 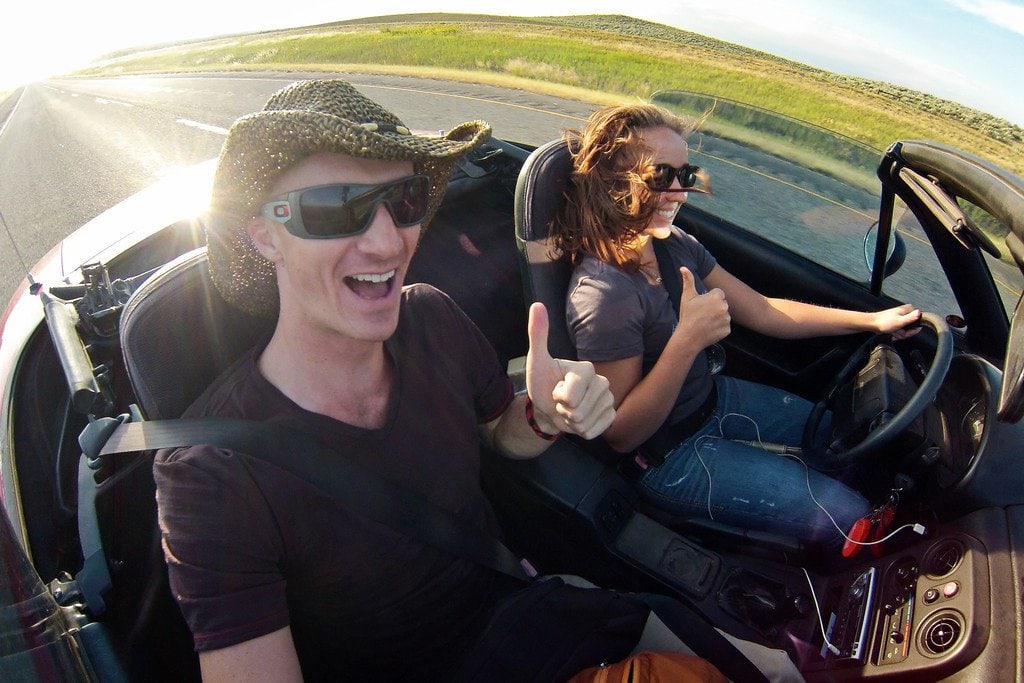 In Billings I settled down at a cafe to wait for my next ride. Dani is a friend of the bride, and was passing through town later that day. She pulled up in a bright red Mazda convertible, walked into the cafe and asked some random customer if he was “The Hitchhiker”.

He was not. That would be me.

We sped off down the highway with the top down. Our destination? The rural farm town of Hardin where we would help with decorations for the wedding. Dani works for a small auto customization & videography company called Mob Theory that specializes in filming road rallies.

She’s learning how to be a rally driver herself actually. 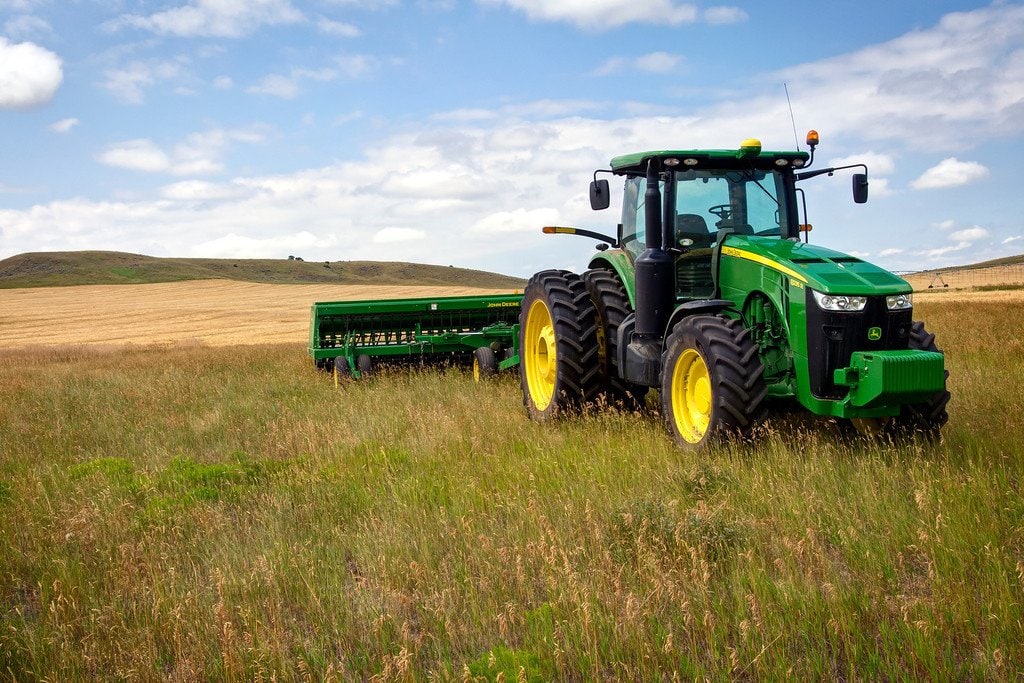 Gabe and I know each other from college at Montana State University. We were DJs who teamed up to throw a bunch of parties around campus. But we hadn’t seen one another for 8 years. These days Gabe runs the day-to-day operations of a 35,000 acre cattle ranch owned by a Venezuelan banker.

I’ve never spent much time on a ranch before, and was very interested in how it all works. Their cattle are bred hormone-free, and shipped off to Europe. Because the EU doesn’t allow hormones in their beef.

The ranch also grows corn, wheat, hay, and other products too. But most of it is used to support the cattle operation.

So what do you do on a giant mega-ranch for fun? Zip around the property on 4×4 quads and shoot big guns of course! 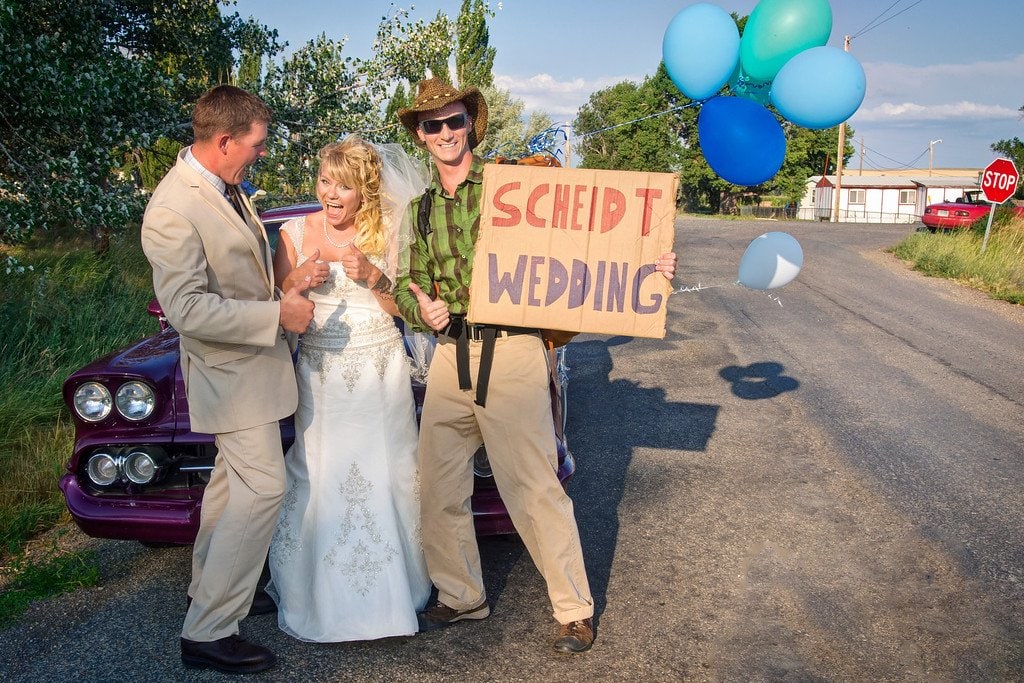 On the day of the wedding, I became the official wedding mascot. Rumors of “The Hitchhiker” were spreading amongst the guests. It was a beautiful and unique ceremony, with Gabe singing his vows to his new bride! That takes major balls.

Even though I just met her, I could tell that Nikki is the perfect match for Gabe.

For fun, I made a cardboard sign to direct guests towards the reception from the side of the road. It was hilarious, but really only for us, because I think it just confused everyone else who wasn’t in on the joke.

After spending a few days on the beautiful ranch learning about high-tech farm equipment, meeting great people, and blasting away with 50-year-old Mosin–Nagant rifles, it was time for me to continue on my journey. ★