Swimming with whale sharks is an underwater adventure I’ve wanted to try for years. I finally took the plunge, and swam alongside these gentle giants in Mexico!

I’ve swam with regular sharks before — the kind that occasionally dine on humans. But swimming with whale sharks is a totally different experience.

Whale sharks are the largest fish in the ocean, growing up to 40 feet long and weighing up to 20,000 pounds. However you don’t have to worry about them eating you with their very tiny teeth.

Which is why you should try swimming with them in Mexico!

Whale sharks are filter-feeders, sucking up microscopic plankton and baby fish with their giant mouths. This makes them similar to whales, although technically they are from the shark family.

They can’t eat humans — which is why swimming with them has become so popular in places like Mexico, the Philippines, and South Africa.

Whale sharks can live up to 70 years old. They move slow enough that we can keep up with them underwater, but barely. You have to swim really fast with fins to stay beside one.

The only real danger is swimming under one. After feeding they sometimes descend without warning… imagine being trapped under a sinking dump truck!

Sailing The Gulf Of Mexico

My girlfriend Anna (AnnaEverywhere.com) and I booked our whale shark tour with Willy’s Tours in Isla Holbox.

Setting off from the dock at 8am, we sped over the Gulf of Mexico for the next 2 hours. Stopping briefly for photos of a pod of playful dolphins!

The boat was covered, which was nice, because that tropical Mexican sun is hot! Eventually we saw other boats gathering in the distance… this was a good sign.

Unfortunately there was only one whale shark that day. But that’s still better than none, which sometimes happens early or late in the season. So a group of 6 boats took turns sending customers into the water.

We sat on the edge with our snorkel gear on, waiting for the signal to jump in. Once you’re in the water, the goal is to kick hard and fast to keep up with the shark. Because if you hesitate, you might miss it.

They swim effortlessly, but are much faster than they look.

You aren’t allowed to touch the whale sharks because it stresses them out, and may cause them to dive deep, ending the experience for everyone. Only 2 people go into the water at a time, along with your guide.

Swimming next to a 30 foot long sea creature, the size of a small bus, was a wild experience. It’s a bit intimidating to be honest… they’re huge! It looks like they could swallow you whole…

But the world’s largest fish won’t try to eat you.

It’s just slurping up tasty plankton and expelling excess seawater through its gills. The white-spotted shark kept her eye on us, but didn’t seem to mind our presence.

Normally whale sharks live much deeper in the ocean — only coming up to eat about 46 pounds of those microscopic organisms each day.

After swimming with the whale shark 3 times, for a few minutes each, it was time to leave it alone and motor off to the next part of the trip.

Our guide prepared fresh ceviche as we sped back to Holbox, on our way to a reef. There we snorkeled for about 30 minutes with sea turtles, manta rays, and a bunch of fish. Including a few barracudas!

We then sailed into a protected bird sanctuary to watch flamingos and other sea birds hanging out in the shallow water, before heading back to the dock.

Is swimming with whale sharks ethical? Personally, I believe responsible and sustainable tourism can help these animals survive.

Sharks of all kinds are being wiped out by overfishing. But conservation & awareness projects to save them are often funded by tour permit fees. Without tours, these programs don’t get much funding.

Yet we also need to be careful, and not wreck the animal’s habitat due to unchecked tourism either. There’s no easy answer.

Whale Shark season on the Yucatan Peninsula is from June to September. This is when the sharks migrate to waters around Cancun, Isla Mujeres, Isla Contoy, and Isla Holbox to feed.

But the best months are July & August, when populations are highest.

Sunny days are better than cloudy days too, but not just because you’ll get better photos. The plankton whale sharks feed on only comes up to the surface when the sun is out, so if it’s cloudy, they stay below.

Most tourists base themselves in Cancun. If you want to book a whale shark tour from Cancun, click here. However, if you have the time, I recommend visiting the beautiful sleepy island of Isla Holbox. Voted a top travel destination by the New York Times.

To get to Holbox, you take a ferry from the fishing town of Chiquila, which is a 2 hour drive from Cancun (3 hours from Playa del Carmen). A bus is also possible, but takes a lot longer with all the stops. Hiring a taxi/shuttle can cost $60 – $100+ USD.

I based myself from Mexico’s Isla Holbox to swim with the whale sharks, and had a wonderful trip. If you’re wondering where to stay on Holbox here are my recommendations: 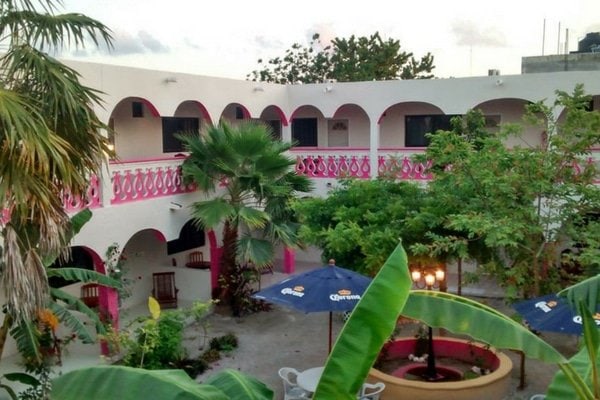 Cielito Lindo
This is where we stayed. Small hotel only a short walk away from the beach and downtown Holbox. Excellent value for the price.

I also enjoy using AirBnB from time to time. Make sure to read my article about how to find cheap hotels too.

Swimming with whale sharks in Mexico was a pretty unique experience, as there are only a few places in the world where you can do this.

Witnessing these gentle giants up close really helps you appreciate how small humans are, and how diverse the ocean truly is. ★

I hope you enjoyed my guide on swimming with whale sharks in Mexico! Hopefully you found it useful. Here are a few more wanderlust-inducing articles that I recommend you read next: 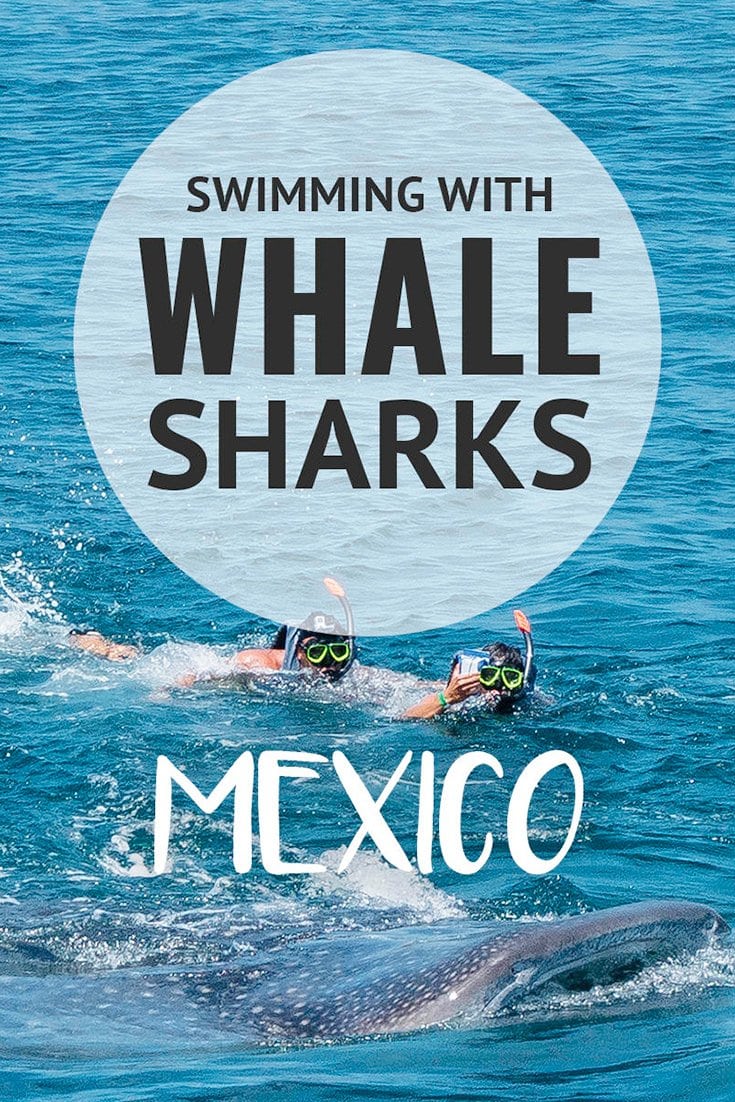 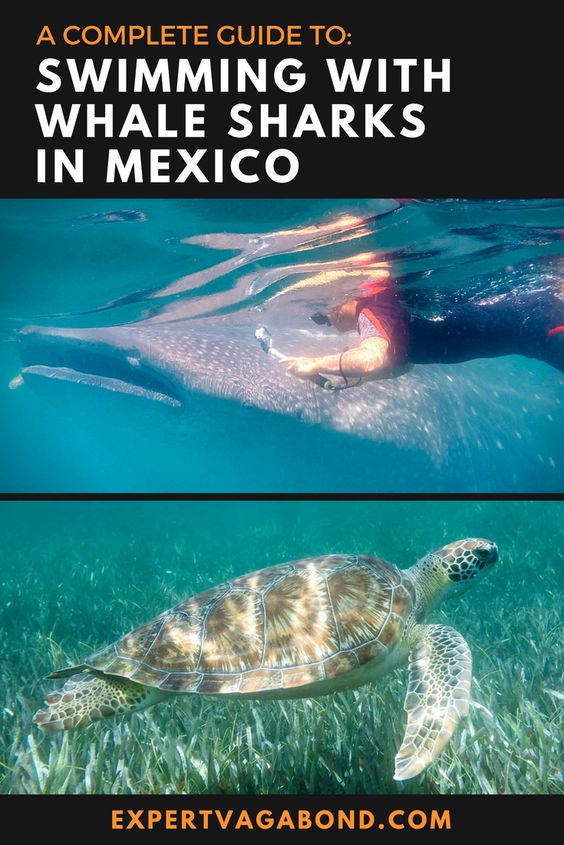 Have any questions about swimming with whale sharks in Mexico? Would you do it? Drop me a message in the comments below!

Disclosure: Some of the links in this post are “affiliate links.” This means if you click on the link and purchase an item, I will receive an affiliate commission, at no extra cost to you. Regardless, I only recommend products or services I use personally and believe will add value to my readers.