Surfing is unpredictable, and forces you out of your comfort zone. You only have a few seconds to decide if you’re going to commit to that wave quickly barreling down behind you.

If you guess wrong, or hesitate, the results might not be pleasant. But if you guess right… the natural high of riding the power of the ocean is pure bliss. An addiction that makes surfers take a beating & come back for more.

Costa Rica’s Nicoya Peninsula reaches out from the northwest region of the country, separated from the mainland by the Gulf of Nicoya.

With a long coastline and many remote uncrowded beaches, it’s an excellent surfing destination. Especially because it’s a meteorological sweet spot for generating Pacific ocean swells.

Renting a sweet 4X4 expedition truck from Nomad America that included a rooftop tent for camping, I explored the peninsula driving through jungle rivers and over rough backcountry roads.

My first stop in Nicoya was the small town of Nosara, where I spent a few days just getting back into the groove of surfing, as I hadn’t ridden waves in a while. Surfing is one of my favorite sports, but it’s a lot harder than it looks!

The town of Nosara has become a popular place for expats from the United States and Canada to settle down, claiming a small piece of paradise for themselves.

The surf is decent year round, and a large beach called Playa Guiones boasts plenty of waves for people of all skill levels. I spent 3 days surfing around Nosara, and seriously didn’t want to leave.

I can see why so many expats decide to move here. It’s exactly what you’d expect a lazy jungle surf town to be like. Monkeys in the trees, yoga classes, dirt roads, and a healthy-living vibe.

There are a few different surf schools and shops nearby, like Juan Surfo’s. They provide both board rentals & surf lessons.

Playa Guiones is particularly special because it’s such a large beach. At 4 miles long, you can walk along endlessly and take your pick from different surf spots, so it never feels super overcrowded.

The area is also a national refuge, which means developers can’t build on the beach itself. So from the water, looking back to shore, it just looks like a wall of jungle in front of you.

You can hang out in little homemade “surf-shacks” with roofs made of palm fronds, hiding from the sun to re-hydrate before heading back into the waves for more surfing.

Waves are pretty gentle at Guiones, so it’s a wonderful location for beginners who are learning to surf. It’s a nice wide sandy beach break… no rocks or coral reef to worry about crashing into.

After a few days of surfing around Nosara, I loaded up the truck and started driving South along the coast on Route 160. Pulling off down rough and muddy backroads to check out different beaches.

My mission was to drive a particularly rugged off-road track that hugs the coastline from Nosara to Santa Teressa. It can only be accomplished in a proper 4X4 truck, and it’s only possible during the dry season.

This is because there are 3 big rivers you must drive through on this route (Ora, Bongo, and Ario). Fjording rivers in a 4×4 truck is a lot of fun! But it can also be a little hazardous if you don’t know what you’re doing.

How To Drive Across A River

If the water is too deep, it can flood into the cab, or even drown the engine (a snorkel helps prevent this). Strong currents can completely lift the vehicle off the ground, floating downriver until it reaches shallows again.

The route might not be as straightforward as you think either. The safest path could require driving upriver a bit before crossing, so it’s wise to watch someone else go first if possible.

Camping Along The Way

I love campervan road trips. The ability to stop on the side of a road, a parking area, or at a campground while you travel really gives you a lot of freedom as a photographer. Great for surfing remote breaks too!

Renting an expedition truck in Costa Rica isn’t super expensive, especially the smaller 4x4s which start at $55 a day. Plus, no need to spend money on hotels/hostels when you have a tent on your roof!

Split between a group of 2-4 people it’s a great deal, and a true off-the-beaten-path adventure in Costa Rica.

Santa Teresa is another expat surf town on the Coast Rican Pacific coast. It’s a bit more crowded than Nosara/Guiones, but still a great place to ride some waves.

While not nearly as big as the surf town mecca of Tamarindo in the North, Santa Teresa has been growing and is popular with backpackers. Proper hotels and B&Bs have sprung up too.

If you’re a surfer, or want to learn, it’s a fun place to hang out for a few days.

There are two main beaches in Santa Teresa, Playa Carmen and Playa Santa Teresa. Popular surf breaks in the area include Suck Rock and La Lora.

The rainy season on the Nicoya Peninsula is August – November, when many surf schools are closed. Early December is a great time to visit, as it’s not so crowded with tourists yet. After Christmas tourism starts to pick up, and clean consistent surf can be had from December – April.

How To Get There

If you’re coming from San Jose, there are two main routes for visiting the Nicoya Peninsula. You can drive around the Gulf Of Nicoya on Route 18, which takes about 5 hours.

Or you can take the Punta Arenas Ferry across the water to Nicoya, and then drive North along the coast. The 4×4 coastal road from Nosara to Santa Teresa takes about 3 hours, provided you don’t get lost (which is easy to do).

There’s a daily bus to Nosara from San Jose at 5:30am departing from the intersection of Avenida 5 and Calles 14/16 (Alfaro Terminal). Another option is to take one of the more frequent buses to the Nicoya Peninsula, then change to another for Nosara. More details here.

Where To Stay In Nicoya

Renting a truck from Nomad America allowed me to camp for most of the trip, occasionally stopping at a guest house for a hot shower. However if camping isn’t for you, here are some other options: 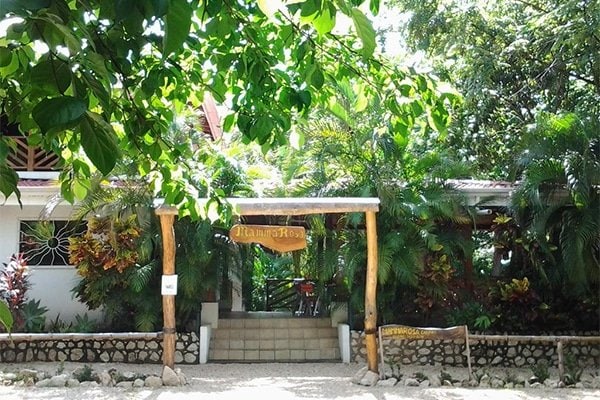 Mamma Rosa
I spent one night here to take advantage of AC, wifi, and a hot shower. It’s location is perfect, with a trail directly to the beach. 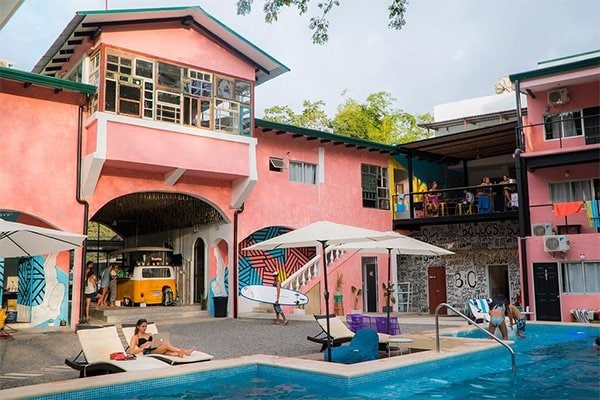 Basically road tripping down the coast of Nicoya Peninsula is an awesome surfing adventure, and won’t break the bank either. Especially if you team up with others to rent an expedition truck with a roof-top tent.

I honestly felt like I was was driving around Jurassic Park in that thing, waiting for a T-Rex to burst out of the jungle and chase me.

Bouncing around on rough Costa Rican back roads, powering through mud holes, and exploring every hidden beach I could find! ★

I hope you enjoyed my guide on surfing in Costa Rica! Hopefully you found it useful. Here are a few more wanderlust-inducing articles that I recommend you read next: 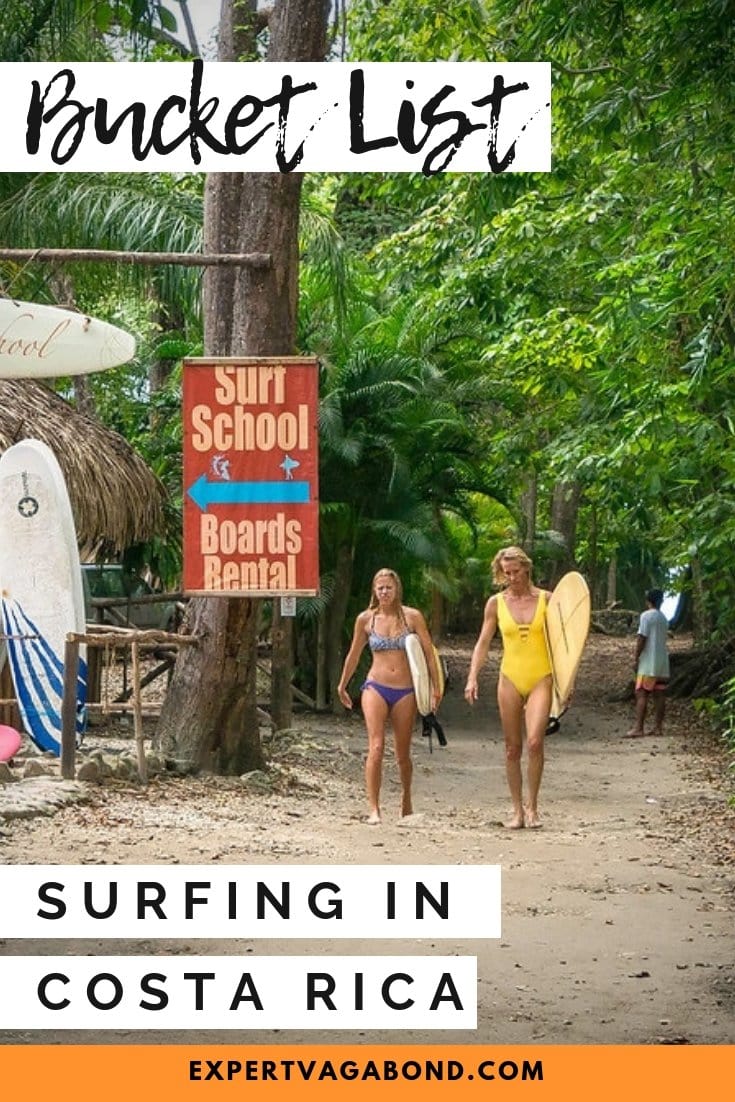 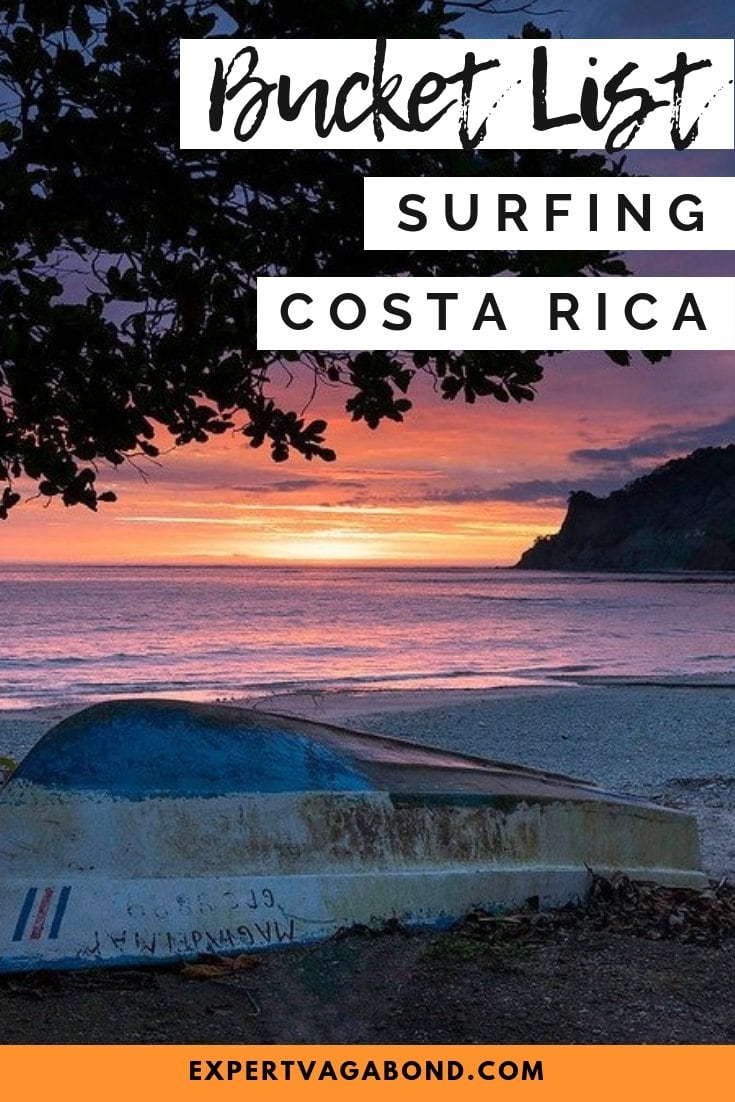 Have any questions about surfing in Costa Rica? Are you planning a trip? Drop me a message in the comments below!