Trinidad is Cuba’s best preserved colonial city, a unique mix of 1850’s architecture & 1950’s cars that feels frozen in time. Check out some of my favorite things to do in Trinidad.

Trinidad was one of the first Cuban towns founded by the Spanish, growing wealthy from production of sugar cane, cattle, and tobacco (with the help of African slave labor).

Much of the architecture remains, one of the best-preserved historic towns in North America, becoming a UNESCO World Heritage Site.

Trinidad Cuba has become one of the most popular cities in the country for travelers, outside of Havana of course!

You can walk down cobblestone streets, listen to live music in the plaza, cool off with fresh sugar cane juice, hop into a horse-drawn carriage, chat with locals, or visit fascinating colonial museums spread about town.

Best Things To Do In Trinidad Cuba For 2020

1. Enjoy The Vibe Of Trinidad

Anna and I spent two days exploring Trinidad with our friends Hannah & Adam from Getting Stamped. Honestly it didn’t feel like we were in town long enough, there’s a lot to see, and Trinidad is bigger than I thought.

It’s certainly a tourist town though — but even with other travelers around, Trinidad doesn’t lose its charm.

Trinidad is a place where new mixes with old to create a jumble of sights, sounds, and smells.

The city has a great laid-back Cuban vibe — I highly recommend getting away from the main square to explore, losing yourself on the fascinating back streets & alleys.

2. Hang Out In Plaza Mayor

Plaza Mayor is the heart of Trinidad, a large plaza comprised of raised gardens, walkways, and cobblestoned streets. Historic buildings from the 18th & 19th centuries still surround the plaza.

Many are painted in pastel colors, topped with red terracotta roofs.

The plaza was built back when the region was rich from sugar plantation wealth. Yet you’ll still find the same churches and mansions previously owned by sugar barons — restored and transformed into museums.

Grab a seat on one of the cast-iron benches, enjoy the gardens, and listen to salsa music emanating from the buildings nearby. However because it’s the main tourist area, be wary of local touts trying to sell you stuff.

You’ll notice Convento de San Francisco right away, as you can see the bright yellow bell tower from most parts of town. It’s the most prominent landmark, and a popular postcard photo.

A former convent, it’s now a museum with artifacts from the revolution.

The climb up to the top of the tower is worth the view, and the museum is interesting too. They have some armored vehicles and stuff from the United States invasion.

The Museo de Arquitectura is located in a 18th century mansion formerly owned by Sanchez Iznaga. Inside you’ll get a glimpse of what these large homes looked like, as well as a 19th-century style bathroom.

Palacio Cantero is another former mansion, now the Municipal Museum. The main attraction is magnificent views of the city offered by its tower.

Palacio Brunet was once the home of the wealthy sugar baron Conde de Brunet, today it houses Museo Romantico, showcasing luxurious items belonging to the family. Like a 1.5 ton marble bathtub!

Cuban food often gets a bad rap. While I didn’t mind it so much, it’s definitely not as spicy & flavorful as Mexican cuisine. Lots of rice, beans, yuca, and meat on the bland side.

You can buy basic meals at restaurants in Trinidad for between $5-10.

While you might not write home about the food, Cuba excels in coffee, rum drinks, and sugar cane juice. Make sure to visit the La Canchánchara mansion for their special cocktail made of rum, honey, lemon, and water.

Playa Ancon is a beautiful white-sand beach only 6 miles away from Trinidad. For only $5-10 CUC you can catch a vintage taxi and spend the afternoon there.

For the more adventurous, rent a bicycle pedal over on your own, which takes about an hour. Cuba’s beaches aren’t very crowded, and the turquoise water is crystal clear.

Grab an icy cocktail and get some sun, or if you’re a scuba diver, there’s a dive shop at Playa Ancon from Marina Blanca, directly across the road from Hotel Ancon.

Trinidad has an older “city center” area around Plaza Mayor where most of the historic buildings and attractions are located. It’s a pedestrian walking area, no cars are allowed. Most tourists tend to stick around Plaza Mayor.

But taking a long walk down some of Trinidad’s side streets until you get completely lost is one of my favorite things to do. You’ll get a glimpse of what life in Trinidad truly looks like.

Locals often gather on doorsteps and street curbs, hiding from the relentless sun. You may see games of dominoes, deep conversations, bird cages hanging from porches. Don’t be afraid to say hello — and ask some questions too. Most people will be happy to chat!

Every night around 7pm locals and tourists alike will dance salsa at the open-air Casa de Musica. Order a cocktail and sit down to watch from the wide stone staircase as the sun sets, soaking up the atmosphere.

The steps are one of Trinidad’s few public wifi hotspots, so you’ll see plenty of people on their smartphones for a quick Facebook or Instagram fix.

Music is a big part of Cuban life, especially in Trinidad. Musicians set up on street corners, public parks, or inside restaurants. There’s even a cool nightclub called Disco Ayala that set inside a natural cave!

When Anna and I wanted to go horseback riding, we just asked the first guy we came across. “No problem!” he said. His friend owns horses and can take us into the mountains for a few hours.

Cuban cowboys were frequently riding their horses down Trinidad’s streets, so we knew it wouldn’t be difficult.

Jesus, our guide, led us out of town past Cuban tobacco farms and up into the dry hills behind Trinidad. We made our way through a forest, eventually arriving at a swimming hole to cool off from the day’s heat.

The Sierra del Escambray Mountains are Cuba’s 2nd largest mountain range. It was here some CIA sponsored anti-Castro “bandits” hid in the mountains and fought to try and take back the new socialist government.

The Escambrays are home to Topes De Collantes National Park, a beautiful nature reserve where you can go hiking, horseback riding, visit numerous waterfalls, or relax with a scenic picnic.

The drive into the mountains is pretty steep, but we still managed with our rental car. After stopping at the visitor’s center, we hiked to a stunning blue waterfall & swimming hole called Vegas Grandes. The hike took 2 hours round trip.

Trinidad was one of the most prosperous cities in Cuba due to enormous sugar production in the nearby Valle de los Ingenios (Valley of the Sugar Mills) which still has some working sugar mills/fields.

The region once housed 50 sugar mills and 30,000 slaves to work the fields. During the 18th and 19th centuries this valley was the sugar producing capital of the world.

Don’t miss the Manaca Iznaga Plantation if you visit the valley, where you can see the remains of the plantation’s main house, a huge tower, and the old slave quarters. You can even ride a classic steam train into the valley from Trinidad.

Trinidad is located in South Central Cuba, a 5-hour drive from Havana by car. With our rental car, we took a longer route through Playa Giron, a nice way to break up the trip and go scuba diving at the famous Bay Of Pigs.

By bus, it’s a 7 hour trip from Havana and costs $25 USD/CUC. The Viazul Bus terminal in Havana is located at the corner of Avenida 26 and Avenida Zoologico. You often have to buy tickets at the station one day in advance.

You can rent your own vintage 1950’s taxi (with driver) for about $100-$120 per day, or share a taxi with other travelers and split the cost. Just keep in mind these old cars break down from time to time.

Where To Stay In Trinidad

We based ourselves in Trinidad Cuba for 2 nights at Hostal Vidal, located across from the bus station (there’s no website). Here are some other recommendations for places to stay in Trinidad.

FREE AIRBNB COUPON CODE!
Have you ever considered short-term apartment rentals? It’s a great way to save money! Click here to learn how to get $35 off your first booking.

Recommended Guidebook: Lonely Planet Cuba
Suggested Reading: The Other Side Of Paradise 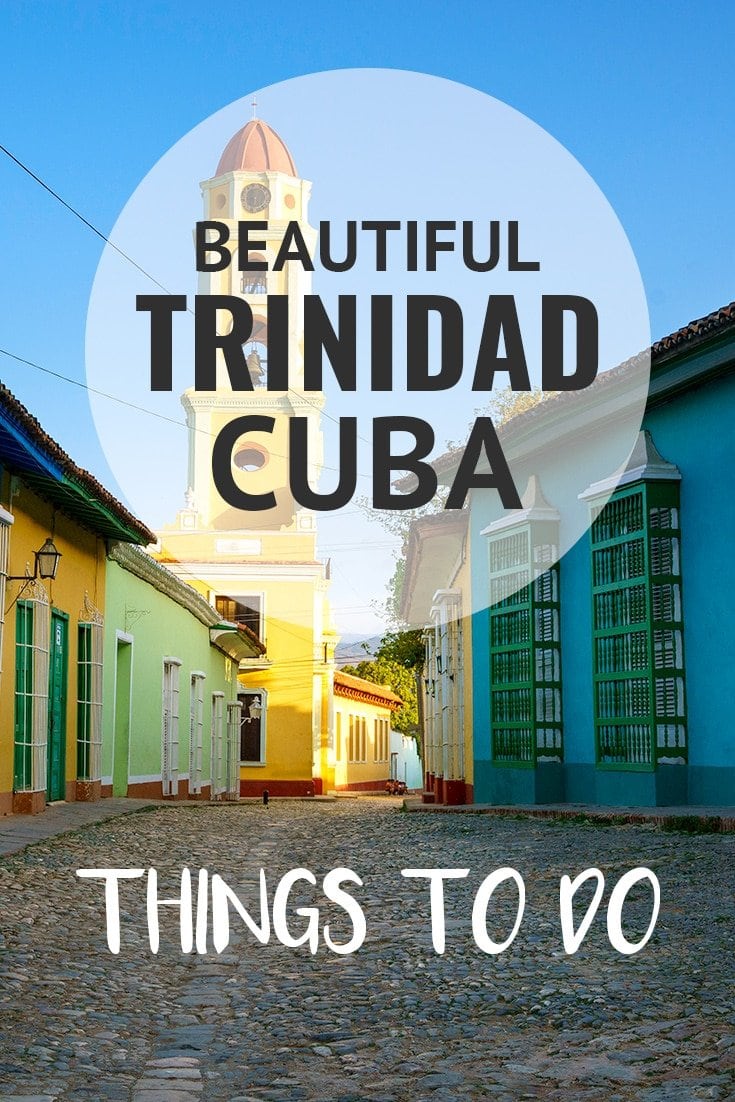 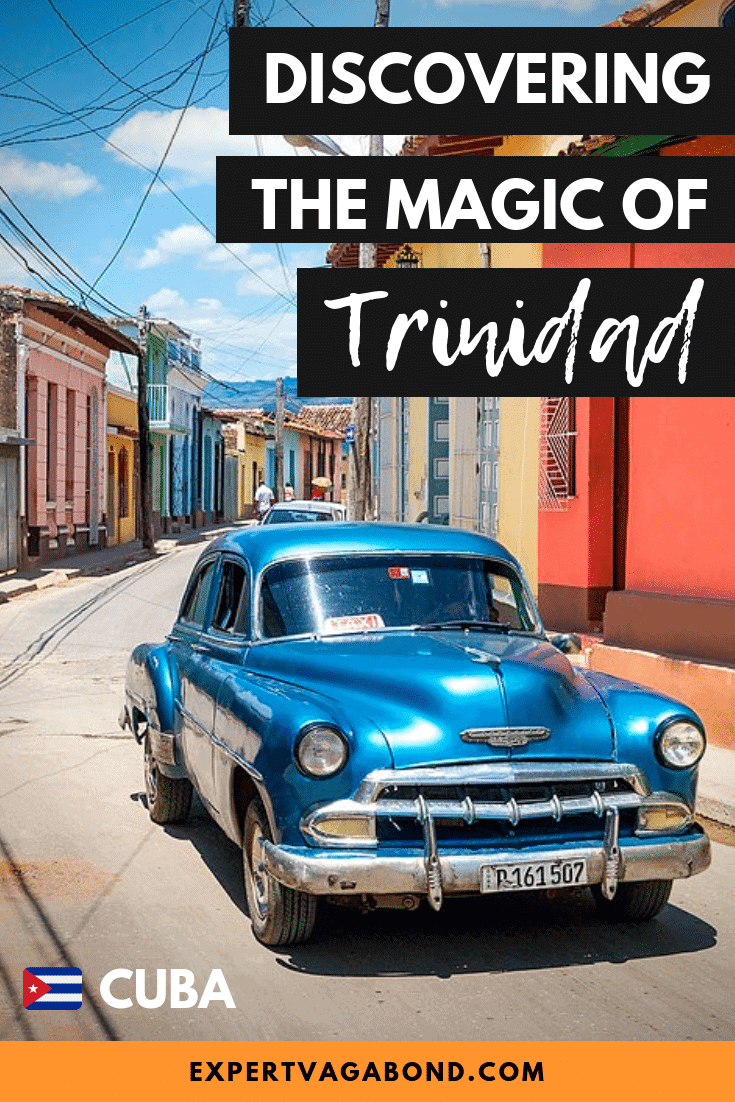 I hope you enjoyed my guide on what to do in Trinidad, Cuba! Hopefully you found it useful. Here are a few more wanderlust-inducing articles that I recommend you read next:

Have any questions about visiting Trinidad Cuba? Are you planning to travel there soon? Drop me a message in the comments below!