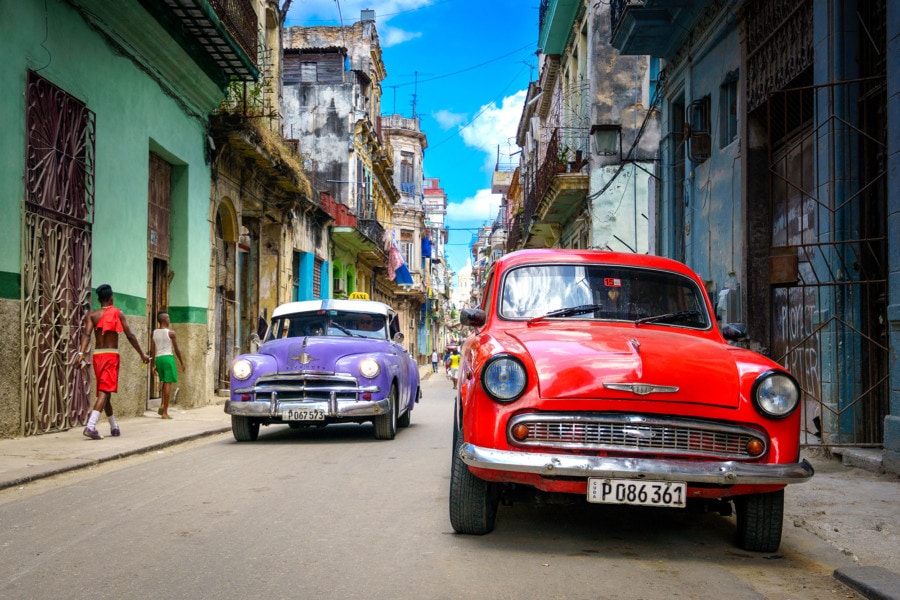 How To Travel to Cuba

Traveling To Cuba On A US Passport 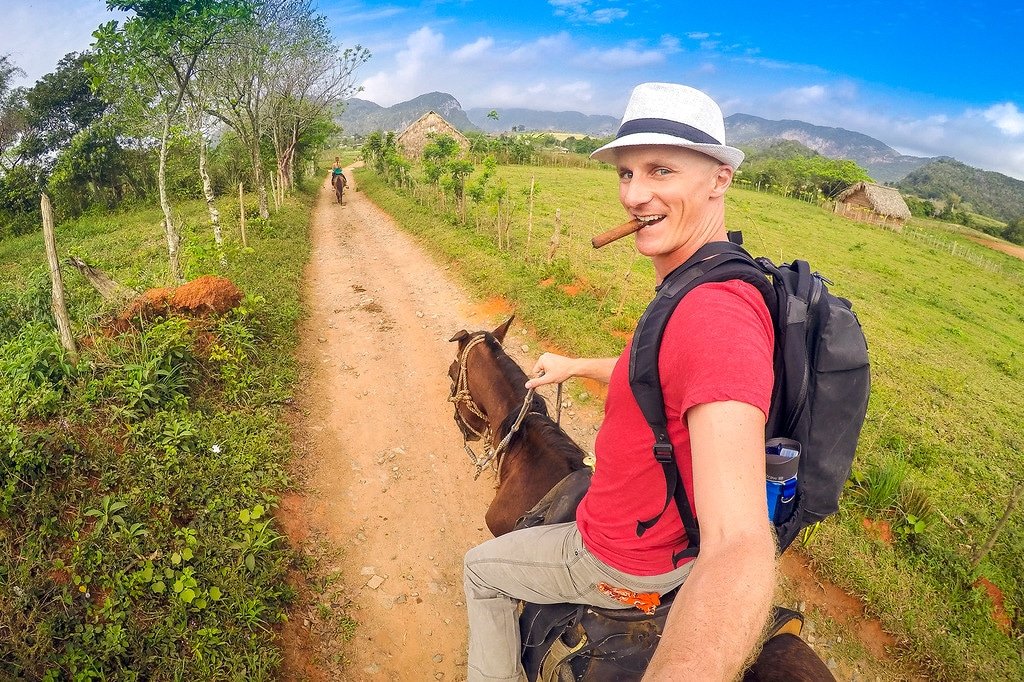 Me Exploring the Tobacco Farms of Viñales

Yes, Americans can travel to Cuba. But not as easily as other countries. There are some additional steps to take.

Just because travel to Cuba for Americans is restricted, doesn’t mean it’s impossible to visit. In fact you can often fly directly to Cuba from a handful of international airports in the United States like New York City, Miami, Ft Lauderdale, and some others.

You can also travel to Cuba from “foreign gateway” cities like Toronto, Canada or Cancun, Mexico — like we did. For many years, this was actually the easiest way to travel to Cuba before US airlines restarted flights to Havana a few years ago.

The Cuban government allows Americans to visit, it’s only the United States that has tried to implement special restrictions on tourism there due to the Cuban Trade Embargo.

Government officials don’t care too much about independent travelers in Cuba. Unless you’re an American business making money in Cuba, or you’re overly loud about your trip, you probably don’t have much to worry about! 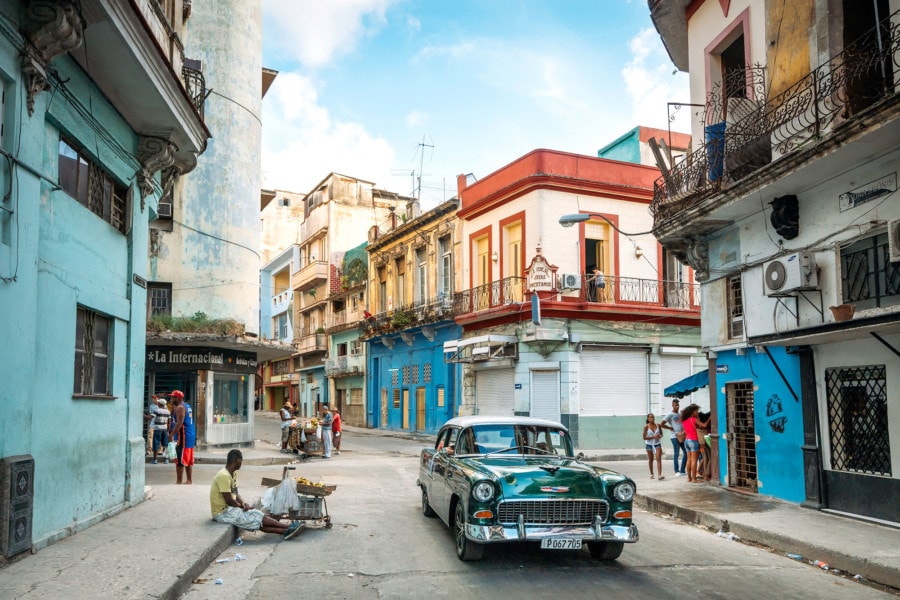 As an American, you can travel to Cuba if the reason for your travel fits a certain category. These include family visits, professional reasons, journalism, religious or cultural programs, and humanitarian projects.

You do not need pre-approval for such a license, but technically your visit should match one of the categories to stay legal. Just in case the US Government decides to ask later (which is rare).

12 CATEGORIES OF AUTHORIZED TRAVEL TO CUBA FOR AMERICANS 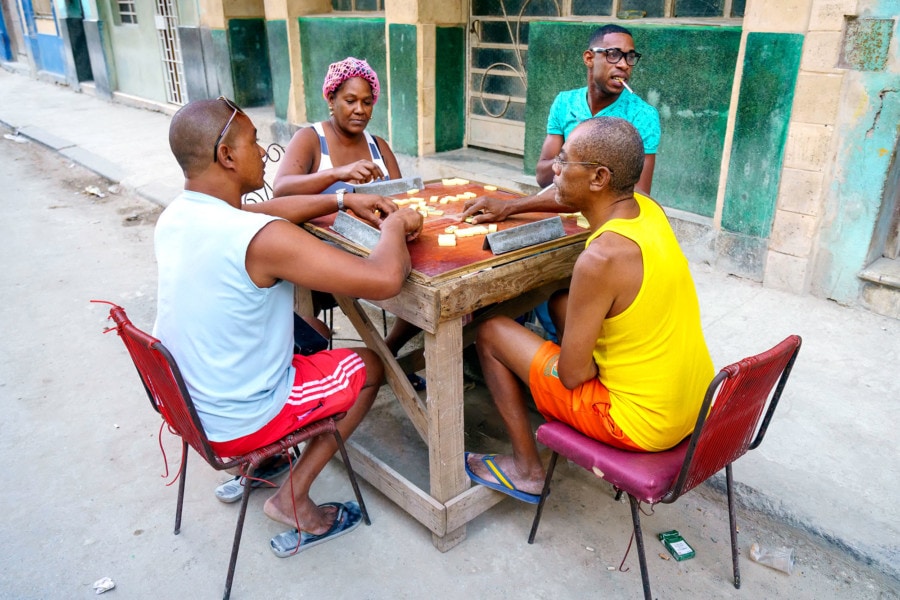 Game of Dominoes in the Streets of Havana

The other option is to travel to Cuba through a foreign gateway city. This means flying yourself to Canada or Mexico first, then traveling to Cuba on your own from one of those countries.

Because for the rest of the world, Cuba has been a popular travel destination for many years. It’s only us Americans who haven’t been able to visit Cuba!

Going to Cuba via a foreign gateway city, as a tourist, has some risks. A few people have been fined by the Treasury Department in the past, and in fact I was eventually subpoenaed by them years later, and sent a warning.

Enforcement of this rule seems to vary depending on who’s in charge though, and probably how public you are with sharing your trip.

Generally, if you take this route, the government won’t know you were in Cuba unless you flaunt that fact. Cuban immigration will offer to not stamp your passport, so when you return to the US through Mexico or Canada, there’s no obvious indication of your “side trip” to Cuba.

Getting A Tourist Card 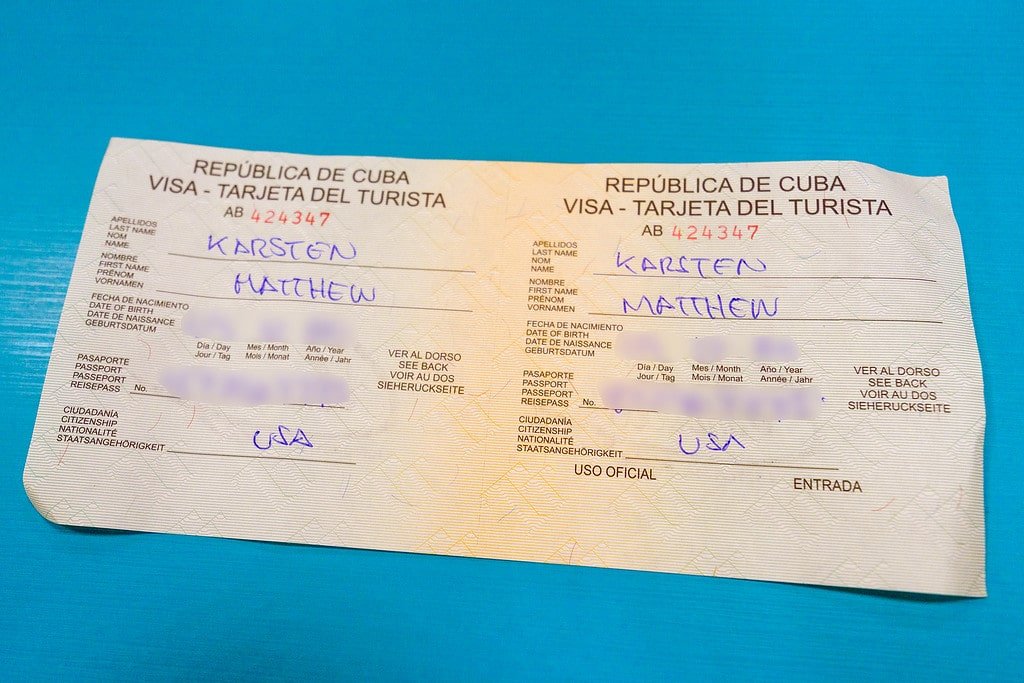 I traveled to Cuba as an American with my girlfriend (now wife) Anna and our friends Hannah & Adam from Getting Stamped.

We traveled through the popular foreign gateway city of Cancun, Mexico.

We bought 30-day Cuban tourist visas at the airport in Cancun for $20.

Visas were purchased at the check in counter (or while waiting in line) before your flight. The visa is a separate card you keep with your passport, but it’s not attached.

We flew into Havana from Cancun on the Mexican budget airline Interjet for $240 USD round trip, and the flight took about an hour.

The Cuban immigration process was super simple. I told the officer in Havana that I was traveling to Cuba for tourism, and he offered to stamp my visa card instead of my passport. This has been standard operating procedure for years.

Cuba WANTS American tourism, so they offer to stamp your visa card instead of your actual passport, so you don’t get in trouble with the US government later.

This way, when you return to the United States, it just looks like you traveled to Mexico. Or Canada. There’s no passport record of your travel to Cuba. They will never know you were there unless they really decide to dig into the specifics.

However, I asked the Cuban immigration agent to stamp my passport directly. I was curious about what would happen when I returned to the United States. Would anyone ask me about it? Would I get fined or arrested?

Nothing happened. When I returned to the United States, immigration didn’t even ask me what countries I’d been to, and they didn’t look at my passport stamps either.

People traveling to Cuba are required to have Cuban health insurance. Don’t worry, they have one of the best healthcare systems in the world!

The easiest way to sign up is when you arrive at Havana’s airport. There’s a small booth before Customs where you can purchase a Cuban health policy for just a few dollars per day. 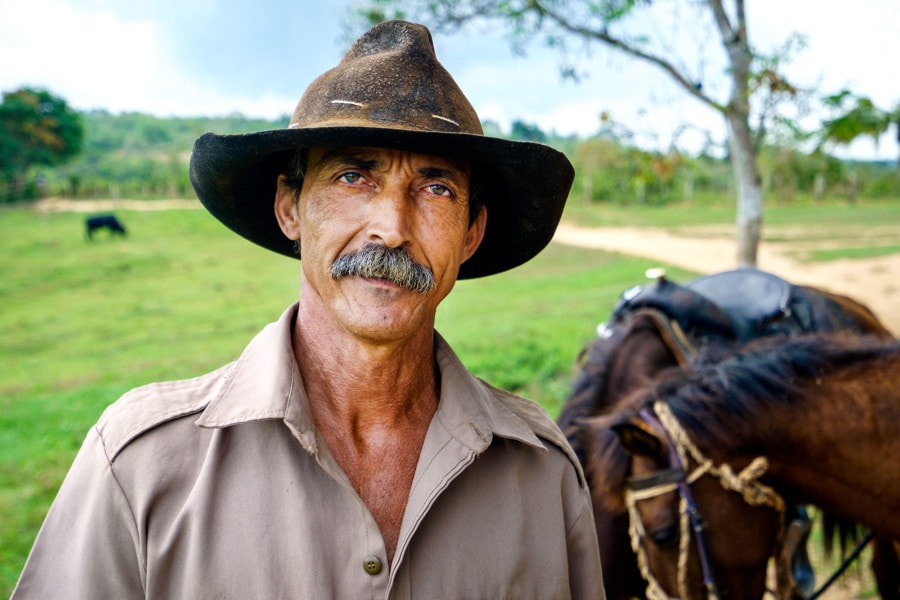 Support Cuban People with Your Trip

While it is extremely unlikely that the US government will decide to ask you questions about your trip to Cuba, just to be safe, I recommend planning an full-time (6 hours per day) travel itinerary that will meet the requirements for traveling to Cuba as an American.

Your itinerary should include plenty of approved activities — like visiting independent museums, talking with local artists, and spending time with your casa particular hosts, learning about their way of life.

You should also document your trip much more than you might when traveling to other countries. Ask for and save all receipts given to you. Take plenty of photos, and record the names of any businesses you visit.

Just so that if they do ask (again, very unlikely), you’ll be ready with a folder full of proof that you didn’t spend money on any Cuban government-run businesses, and instead trying to support the Cuban people while you were there.

How do you know which businesses are run by the Cuban government? There’s a restricted business list maintained by the US State Department. Americans are not allowed to spend any money at these hotels, restaurants, or tour companies due to their connection with the Cuban military. 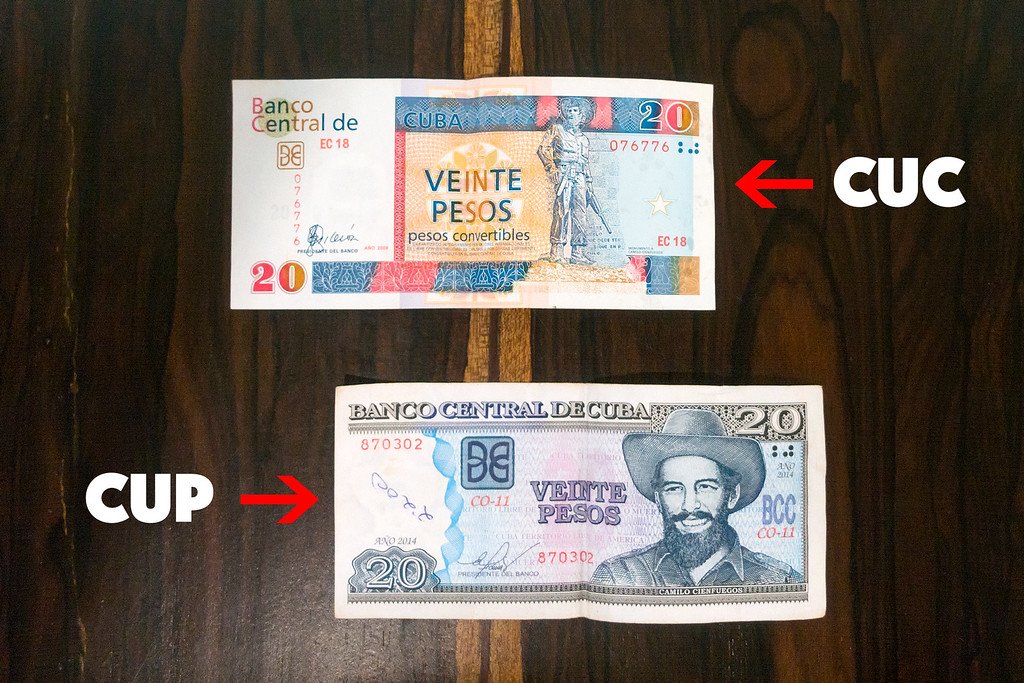 Credit & debit cards issued by American banks still don’t work in Cuba. So a trip to the island involves bringing lots of cash. How much? To give you an idea, you can travel there comfortably on $50 – $100 per day.

Bring more than you need to be safe. If you run out, you’re out of luck!

Cuba actually has two different currencies. The Cuban Convertible Peso (CUC) is the “tourist” currency, pegged to the American dollar. The Cuban Peso (CUP) is what locals use, and worth a lot less. So when you exchange money as a tourist, you’ll receive CUC.

You can exchange US dollars for CUC, but there is a special 10% penalty fee for this service. So it’s cheaper to exchange Euros, Canadian Dollars, British Pounds, or Mexican Pesos for CUC instead.

There’s an official currency exchange outside the airport in Havana. You can exchange your leftover CUC back to US dollars (or whatever) before you leave the country too.

What about accommodation in Cuba? How do you get around once you’re there? Do they have wifi? What should you eat there?

These are all questions I had before visiting for the first time, that’s why I’ve put together a complete travel guide to Cuba for you based on my experience.

Learn where to eat, fun things to do in Cuba, examples from my 10-day itinerary, and much more!

History Of The Trade Embargo

Back in 1960, the United States imposed a severe trade embargo against Cuba. The Blockade was created after Cuba nationalized American-owned oil refineries without compensation.

As part of this embargo, travel to Cuba by Americans has been restricted for over half a century.

Or more specifically, it’s technically illegal for U.S. citizens to have transactions (spend money or receive gifts) in Cuba under most circumstances.

Basically, a backdoor (and very likely unconstitutional way) of preventing most Americans from traveling to Cuba.

Due to economic sanctions, air travel to Cuba from the United States was almost impossible. American credit & debit cards don’t work in Cuba either.

However rules for traveling to Cuba are finally beginning to change. Lets hope it gets even easier in the future! 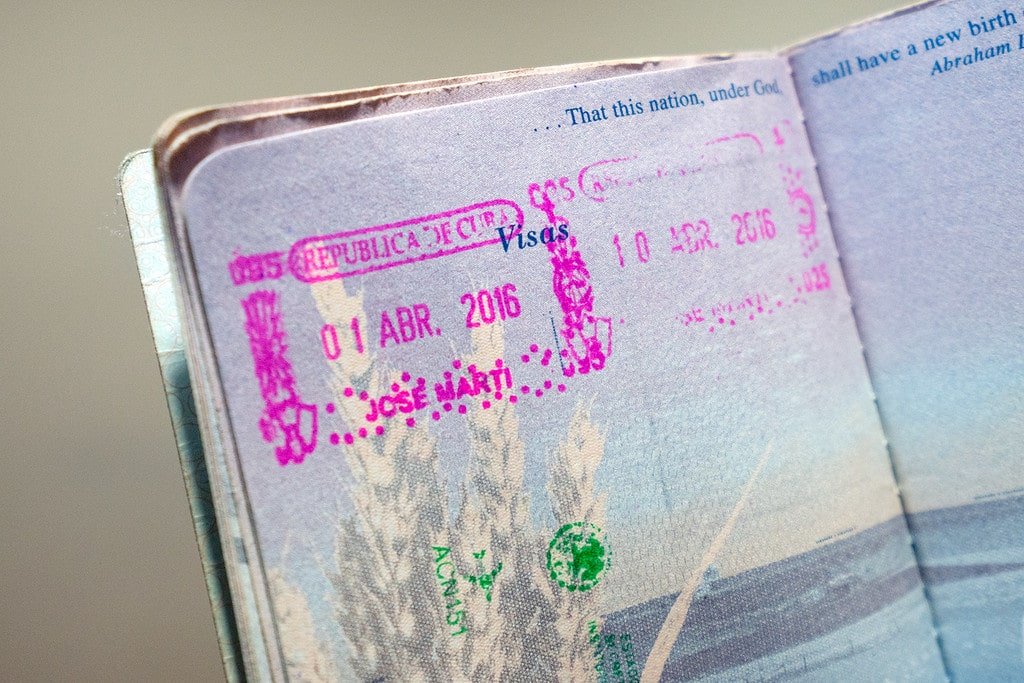 What Is The Cuban Exit Fee?

As of May 1st 2015, Cuba no longer charges the $25 CUC exit fee to travelers leaving the country, this fee is now included in the price of your airline.

Is Water Safe To Drink In Cuba?

Tap water in Cuba is not safe to drink, and bottled water can sometimes be difficult to find depending on where you are. If you plan on traveling to Cuba, I recommend picking up a LifeStraw Filtered Water Bottle. It’s better for the environment too!

Can You Bring Back Cuban Cigars?

I thought you’d never ask! So officially, if you are traveling to Cuba under one of the 12 special categories, you are now allowed to bring back $400 worth of souvenirs, including up to $100 worth of Cuban cigars. Yay!

I managed to bring 30 Cuban cigars back into the United States. I was never questioned about tobacco, and it’s not listed on the customs form as something I have to declare anyway.

Is Traveling To Cuba Ethical?

Good question. While it’s probably impossible to completely avoid giving some of your tourist dollars to the Cuban Government, traveling to Cuba does help the local economy there, which has been hurting badly for years.

Everyone seems to be worried that Cuba is going to get “destroyed” by American tourism, which seems ridiculous to me.

Sure, things will slowly change over time, as they do. Old buildings will get repaired, newer cars will fill the roadways, etc. But those changes will IMPROVE the lives of Cubans — which is a good thing.

It’s really pretty arrogant and egotistical for tourists to wish Cuba remains in a perpetual state of decay for their personal entertainment.

Cubans deserve progress and a better life, just like the rest of us! ★

Recommended Guidebook: Lonely Planet Cuba
Suggested Reading: The Other Side Of Paradise
[/su_box] 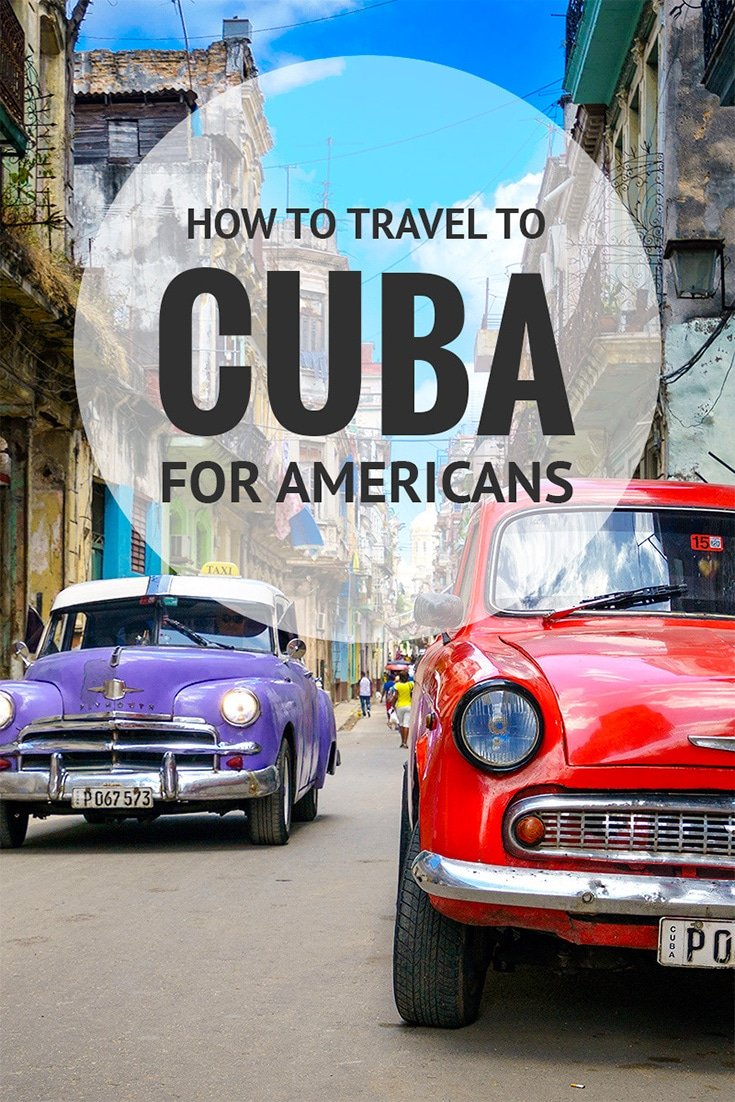 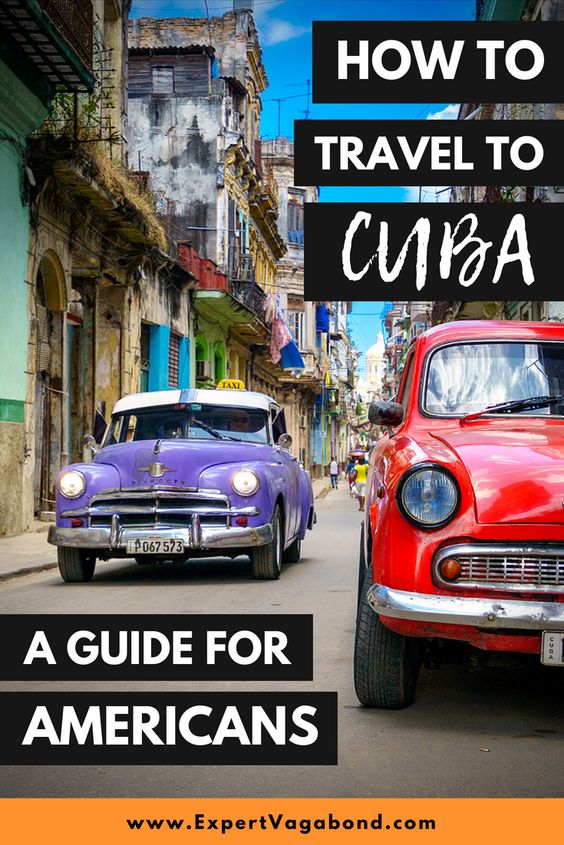 I hope you enjoyed my guide to Cuban travel for Americans! Hopefully you found it useful. Here are a few more wanderlust-inducing articles that I recommend you read next: