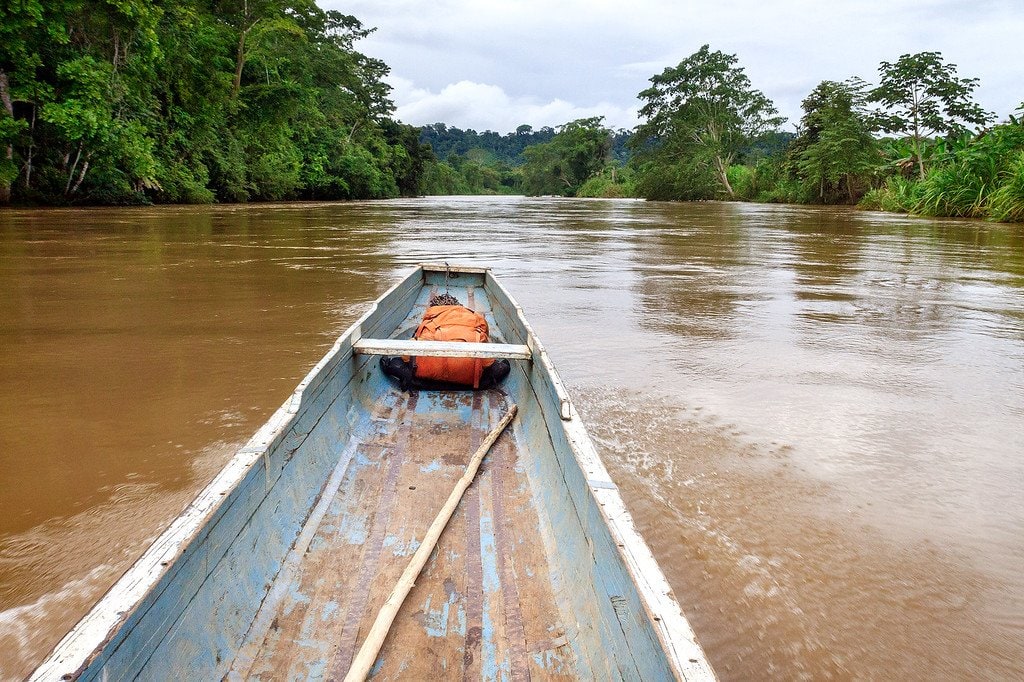 After traveling through the Darien Gap by piragua canoe to visit a remote jungle village, I was forced to leave when security forces kicked me out.

The Darien is a swath of roadless wilderness between Panama & Colombia that’s full of mystery & intrigue. For years it’s been known as a haven for criminals, drug smugglers, and anti-government guerrilla groups.

Understandably most travelers decide to avoid the area, sailing around or flying over it instead.

But after speaking with a few individuals who had recently made the journey inside, I determined that it was safe enough to attempt a trip. Panama’s elite border security force Senafront has built up a strong presence in much of the region.

While the Darien Gap is by no means danger-free, it’s safer than it was just a few years ago.

My morning started in the village of El Real. I said goodbye to my Brazilian friend Gabriel as he hitched a ride to Yaviza via canoe to catch a local bus back to Panama City.

Unfortunately he did not have the proper permissions to continue further with me.

From here on it would just be myself and Isaac — a local guide from the Kuna indigenous tribe. 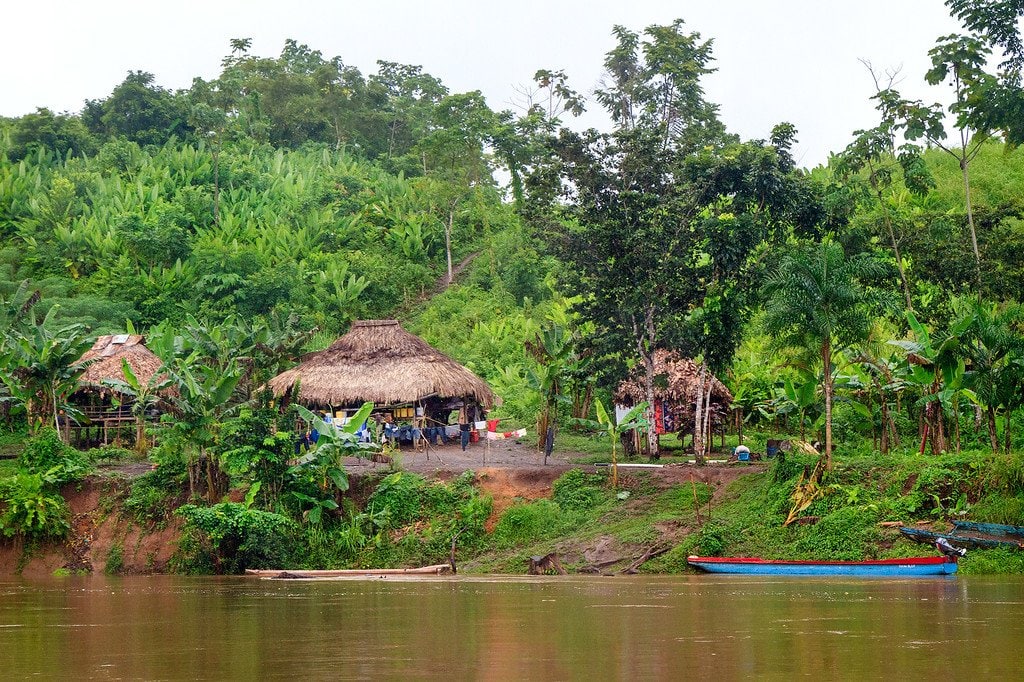 Indigenous Stilt Homes Along the River

Traveling Through the Darien Jungle

We began loading our skinny 25-foot long wooden piragua canoe with gas & supplies for the 5 hour trip up the Turia River to the village of Boca de Cupe. The simple craft used a small outboard motor to power us through the river’s current.

Of course it was raining when we finally pulled out onto the water. October is the heart of the rainy season here.

Rain had been a constant companion while trekking through the wilderness of Darien National Park for the past 3 days. We were well accustomed to it at this point.

Our piragua cut through the wet & humid air making it’s way deeper into the jungle over a highway of silty brown water.

Traditional thatched-roof homes built by the Emberá people were perched on stilts along the riverbank.

Local indigenous families floated past us in their own piraguas loaded full of plantain bananas, the primary cash crop in this remote region of the world. 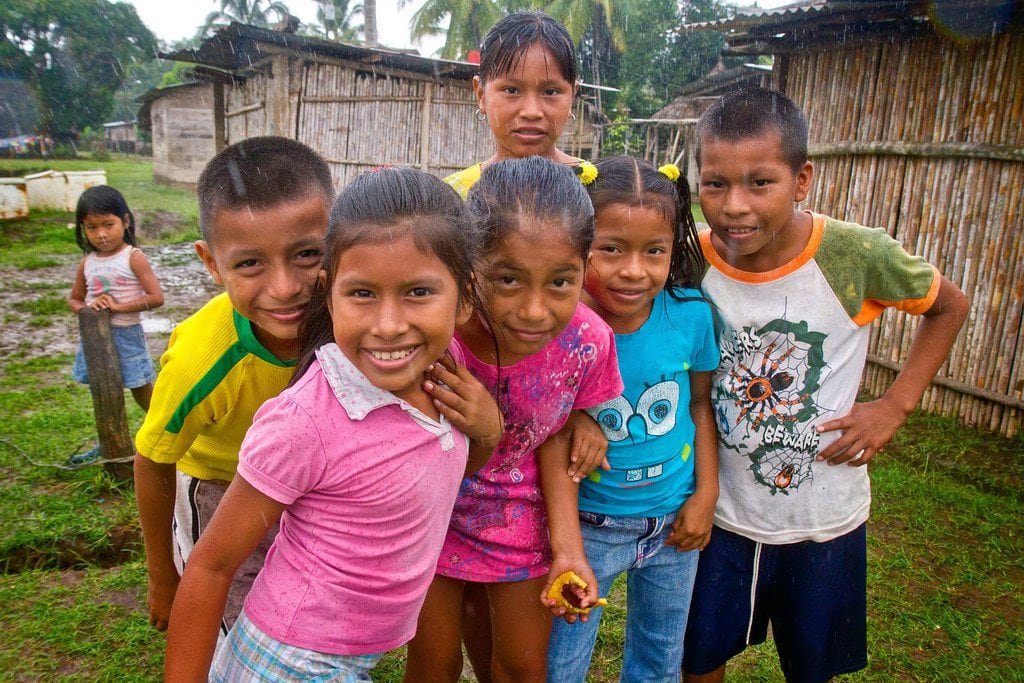 We were forced to stop at Vista Alegre, a small Wounaan tribal village with a riverside security checkpoint. It was a simple military bunker made from sandbags and camouflage netting.

Hard looking men with automatic weapons took my passport and letter of permission, trying to decide what to do with me.

A posse of local Wounaan children came out to inspect me along with the soldiers — gringos are a rarity in these parts.

It was then that some children noticed my piragua canoe had broken loose from the dock, and was quickly floating down the swollen Turia river without us! 8O

We raced through the mud while one boy actually jumped into the swift moving river and saved the boat (and all my gear) before it was lost.

After pulling it back upstream and securing it to a dock, the soldiers finally told me that we’d been approved and would be allowed to continue on our journey. 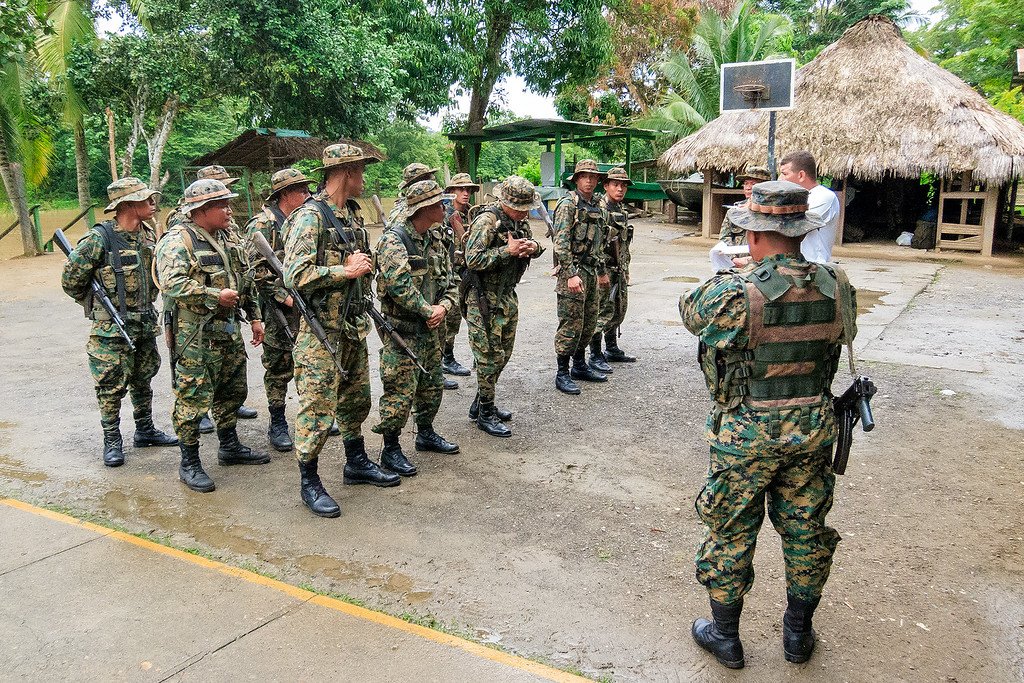 Senafront Soldiers in the Darien Gap

For 5 long hours we slowly pushed our way up the winding Rio Turia in the pouring rain — passing by the villages of Unión de Chocó, Yape, and Capeti. But my discomfort was lessened as I listened to the songs of exotic birds & searched along the river’s muddy banks for Caimans (part of the alligator/crocodile family).

Eventually our destination came into view.

The town of Boca de Cupe is located on the Turia River, about 20 miles from the Colombian border. Some 30% of it’s inhabitants are Colombian refugees.

In the 1900’s Boca de Cupe was an integral part of the British-owned Cana gold mines, where ore was transported through the jungle via single-gage railway before getting shipped downriver to the coast.

But prior to British control, the Cana mines were owned by the Spanish in the 1700’s. British & French pirates frequently ransacked the very lucrative gold producing area. 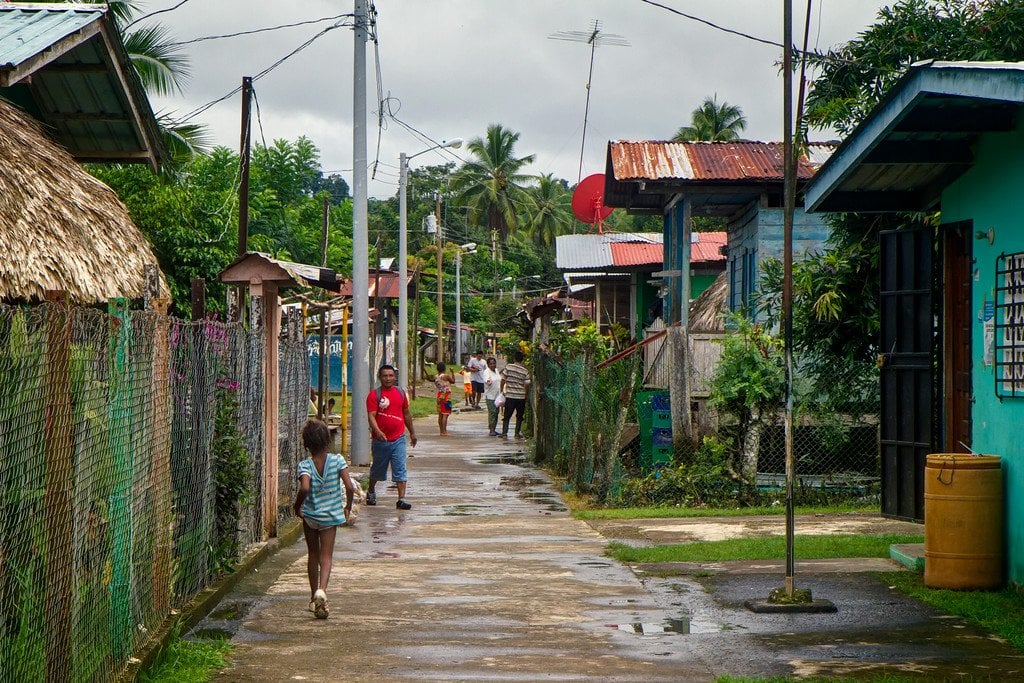 A History of Violence

In more recent times, the area around Boca de Cupe has been a hotbed of Colombian guerrilla activity. There are good reasons why travelers have avoided the Darien Gap region over the last 20 years.

All these incidents and more began to humiliate the Panamanian government, who eventually stepped up efforts to control their lawless & wild backyard. 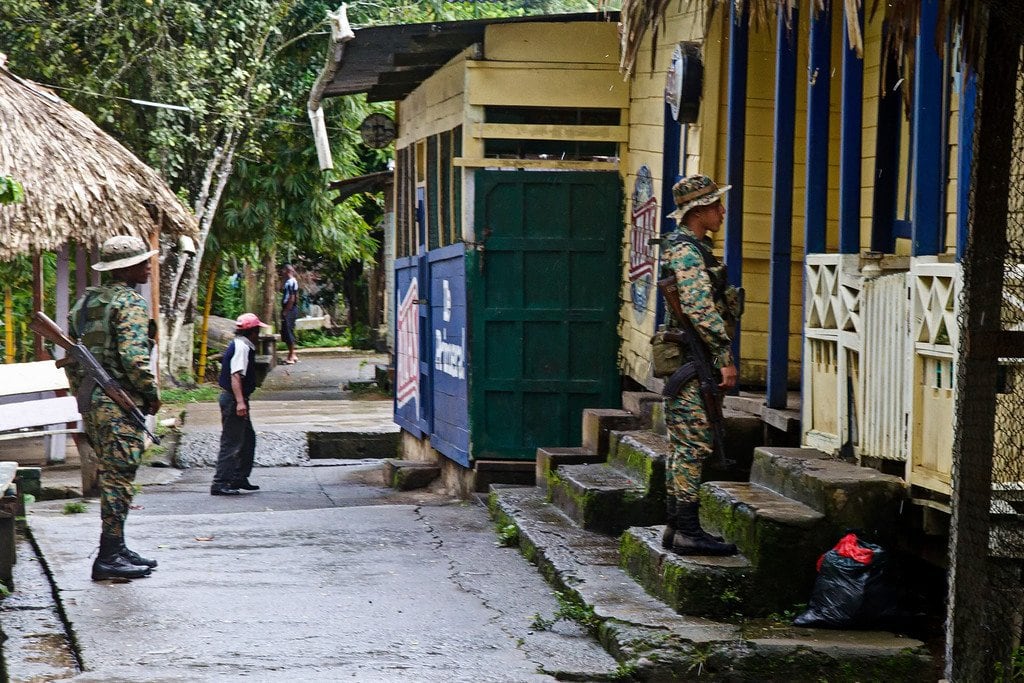 Meeting with the Comandante

We pulled our piragua up to an embankment and began unloading gear as a soldier quietly looked on. When finished, he escorted us through town past dozens of curious onlookers. Time to check in with the Comandante of the Senafront base.

Inside the fortified building I spied a giant .50 caliber machine gun leaning against a wall..

Technically Senafront isn’t a military organization, as Panama’s standing army was dissolved after the 1989 US invasion. Officially they are tasked with protecting the country’s border, and are actually considered police.

Sure, maybe they don’t have the power to invade another country, but they are definitely unlike any other police force I’ve ever seen…

The commander spoke some English, which up to this point had been very rare here inside the Darien. I explained that my plan was to spend the night in Boca de Cupe, and I had all the proper paperwork.

He would make some radio calls to headquarters back in Panama City to confirm. 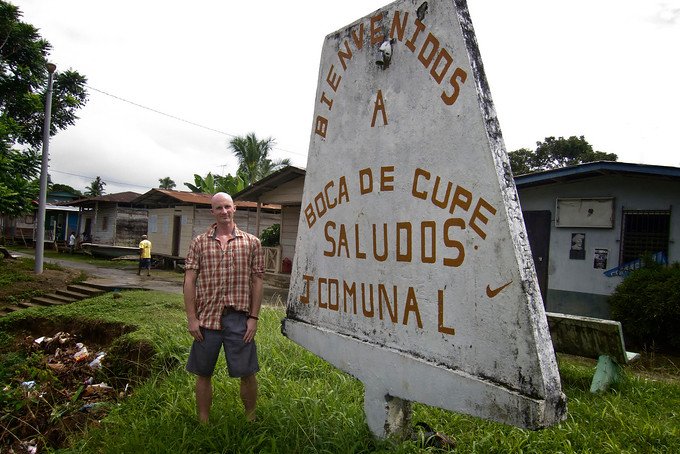 Kicked Out of Town!

Isaac and I checked ourselves into a cheap dormitory where I changed and cleaned up. As soon as we went looking for a place to eat, some local “women of the night” quickly found us and wanted to know if we needed any company.

They were obviously amused to have a white guy in town.

We brushed them off and found a cantina that served food. This place was filled with sketchy looking characters. Younger guys with fancy clothes & jewelry that didn’t quite fit this poor & remote jungle town.

Drug smuggling from Colombia to Panama is still very rampant within the Darien… but I couldn’t be sure, and didn’t feel comfortable asking them what they did for work.

After a few $0.60 beers and a $2 meal, it was time to head back to the base. It was there I learned that I would not be allowed to spend the evening in Boca de Cupe. :(

Reason: They were afraid I’d get robbed in the middle of the night.

Unfortunately this meant we must leave town immediately, before the evening river curfew took effect.

A curfew is in place to make it more difficult for drug smugglers & paramilitary groups to operate on the river at night.

There was no talking my way out of this one. After a long & uncomfortable five-hour river journey through the jungle in the pouring rain just to get here, I’d now have to turn around and do it all over again to go back!

We reluctantly loaded our gear into the piragua, fired up the outboard motor, and left the village. The town of Boca de Cupe would ultimately be the furthest I could get inside the notorious Darien Gap.

But I’m happy I went, as it was quite an experience. :D

I hope you enjoyed my story about the day I was kicked out of a Panamanian village…! Here are some more interesting stories I recommend you read next: