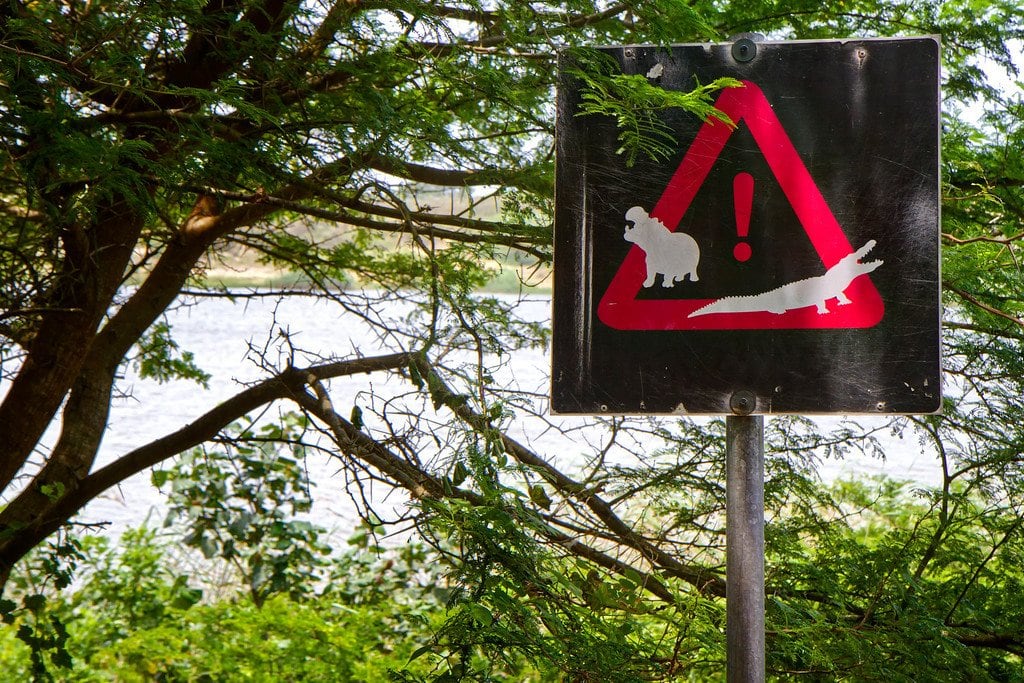 The St. Lucia estuary is filled with some of Africa’s most dangerous animals. Paddling kayaks through it on safari is probably one of the craziest things I’ve ever done.

Just do a Google search for “most dangerous animals in Africa” and see what pops up.

And we were about to go kayaking with all three. Yay!

In fact the big ol’ fat Hippopotamus is Africa’s MOST dangerous animal. Turns out they happen to be just a bit faster than they look… 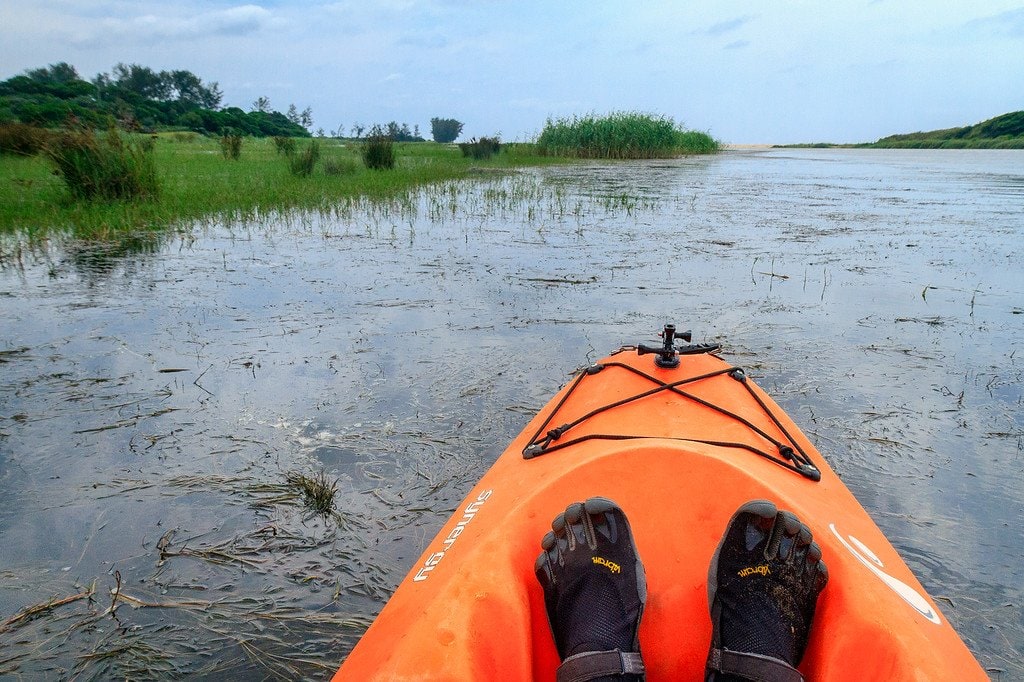 Kayaking through iSimangaliso – Hoping I Don’t Get Eaten

Not Your Typical Kayaking Trip…

I’ve done a lot of kayaking over the years, in both lakes & whitewater rivers. But I’ve never kayaked alongside wild animals that could easily kill me if they wanted to.

This was going to be a completely new experience!

Before we began the adventure, our guide from St. Lucia Kayak Safaris warned us not to get too close to the animals. They are unpredictable, after all.

While we knew about the crocodiles and hippos that we’d likely see, he failed to mention that the estuary is also home to Bull Sharks… which was probably a good thing, as everyone was already a bit nervous about the other creatures.

It wasn’t until we were out on the water, and Wandering Earl saw a shark fin swim by him, that we were briefed on this other minor detail.

But if you think about it, what’s one more lethal animal swimming with us anyway?

There was no turning back now. :D 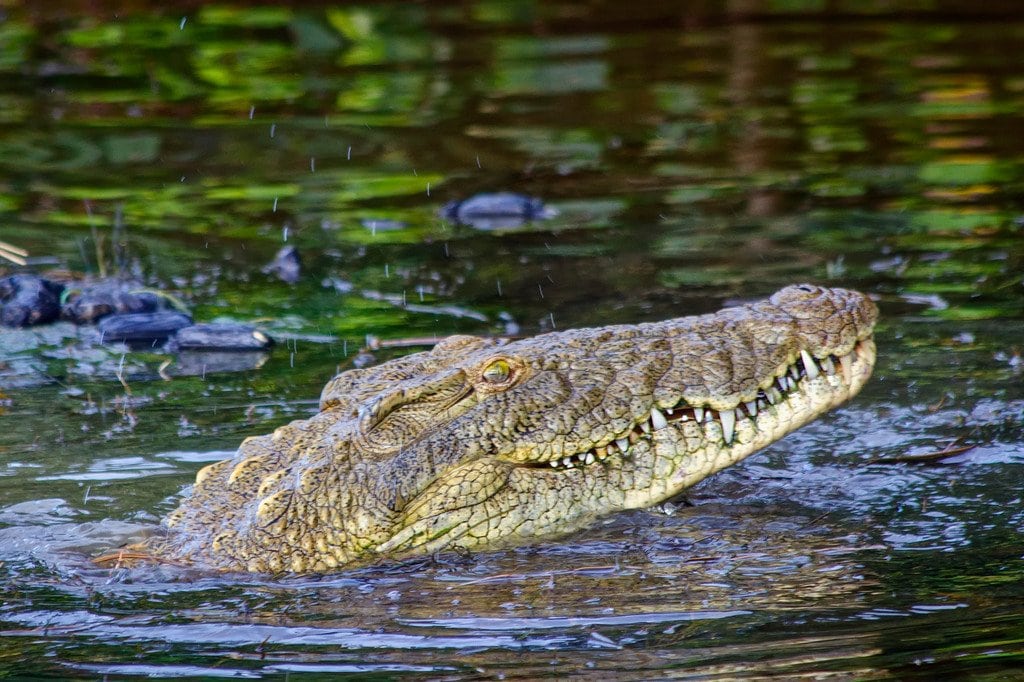 Chased Down by Crocodiles!

After Earl saw the shark, crocodiles were the next monsters we encountered. Their evil-looking eyes peering at us from just above the water, or out sunbathing along the shore.

I counted about 6 of them during the 2.5 hour tour.

We would paddle up towards them — only to have the prehistoric creatures slither away and dive into the water. It seems the crocodiles were more afraid of us than we thought.

One of the beasts disappeared under us, only to suddenly reappear right behind us. He then proceeded to follow our kayaks!

Luckily Earl & Rachelle from The Travel Bite were in the rear, so if anyone was going to get eaten, it would be them. :twisted:

But eventually the croc lost interest and disappeared again. 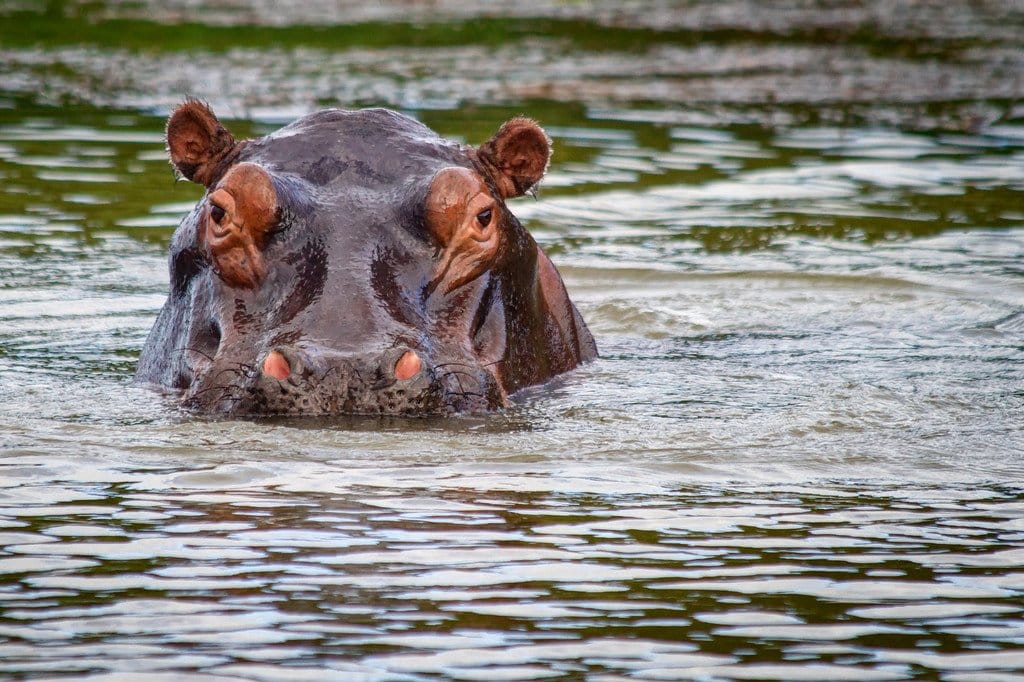 Come Closer. I Haven’t Mauled a Human in Weeks

Most Dangerous Animal in Africa?

Next we glided our boats into hippo territory. The Hippopotamus kills more people in Africa than Lions, Elephants, Snakes, or Buffalo. You’d never suspect this when looking at it from a distance. At first glance it’s big, fat, vegetarian, and pretty awkward.

But underestimating a hippo can easily get you killed.

Those tiny legs can propel the rest of it up to 20 MPH, they are extremely territorial, and they have a mean temper! A hippo’s mouth is also full of jagged ivory teeth covered in toxic bacteria.

For the most part they are easy to spot though — we kept our distance while watching them play, grunt, and show off their ugly smiles.

But extra caution was needed while kayaking around the thick grass & reeds along the riverbank, just in case a few were hiding nearby.

Most hippo attacks occur when people get in between them and the water. They search for food on land in the evenings, and stay in the water during the day to keep cool & protected from the sun.

We were actually able to witness some of their aggressiveness the day before when a large male hippopotamus charged our tour boat with over 20 people on board. 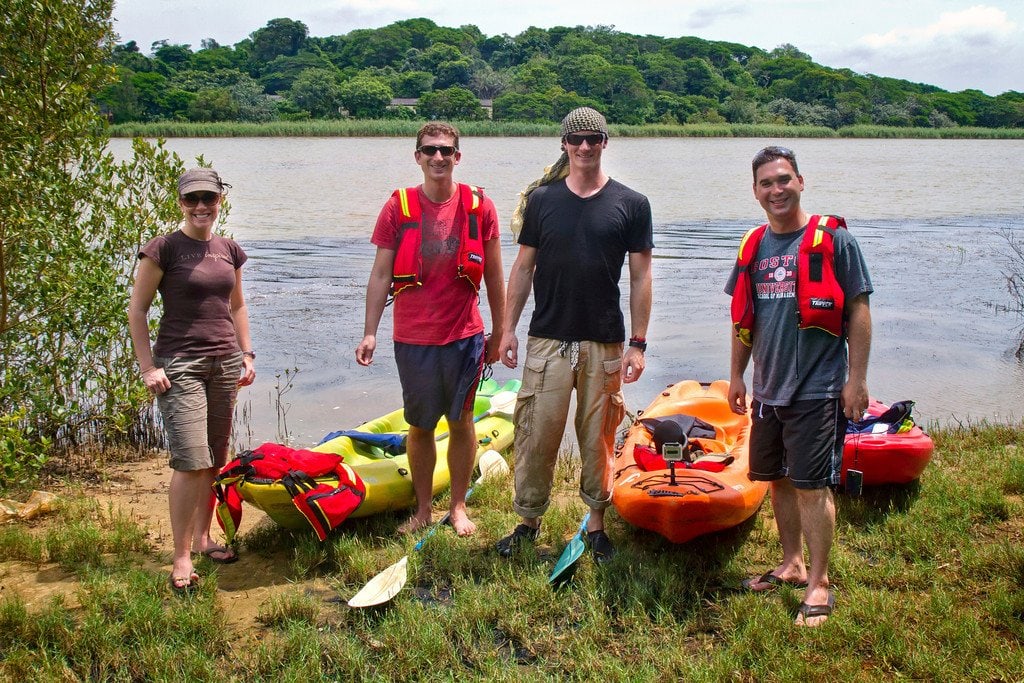 Everyone Made it Back in One Piece

In addition to crocodiles, a shark, and the hippos we encountered, there were plenty of colorful birds to see. We spotted the bright red eyes and strange upside-down nests of the African Golden Weaver, as well as the funny looking Yellow Billed Stork.

While leaving in a truck after our kayaking adventure, a poisonous Forest Cobra snake slithered across the road in front of us!

It was a pleasure to spend a few hours exploring the beautiful iSimangaliso Wetland area via kayak — especially since we all made it back in one piece.

Because getting eaten by wild animals will ruin anyone’s day. :D

I hope you enjoyed my guide on the iSimangaliso kayak safari! Hopefully you found it useful. Here are a few more wanderlust-inducing articles that I recommend you read next:

This adventure was made possible with help from South African Tourism. However, as you probably know by now, all opinions & thoughts are my own.

We stayed in St. Lucia this past July ('12) Took the smaller tour boat up the river. Just fantastic. Wish we had known about the kayak tour, as we paddle at home.

We encountered a hippo on the city streets while we were going out to eat. A week before our arrival a local man nearly lost his life when he was attacked by a hippo in his yard. The locals suggest not going out after dark on foot.

St. Lucia is a lovely town, the Indian Ocean is beautiful. The iSimangaliso Wetland Park is also a great place to self-drive for wildlife viewing.

Anyone from Florida should be advised that alligators are docile creatures compared to crocodiles.

It's beautiful there, isn't it? We also had our own hippo encounters in town after dark. Someone was always on "hippo watch" while walking around.

I read about this dude who was plucked from his kayak by a 15 foot crocodile on a river in the Congo. The nice thing about going on a tour like this is the operators would know if there was a threat like this and not allow boats on the water. I guess some crocs are man eaters while others are not.

Yikes! Glad that didn't happen to us...

Simply incredible! I would love to do this although there is no denying my excitement would be mixed with fear :D

My excitement was certainly mixed with a dose of fear as well. But I think a good dose of fear often makes for the most memorable experiences... :)

Oh man, this is some adventuring on the next level! I've been in small boats in central and eastern Africa a number of times where I've seen hippos and then they've disappeared underwater only to sprout up a little too close for our comfort - they give you a bit of a feeling of helplessness... as they could flip the boat so easily, but it is thrilling. You photos are great!