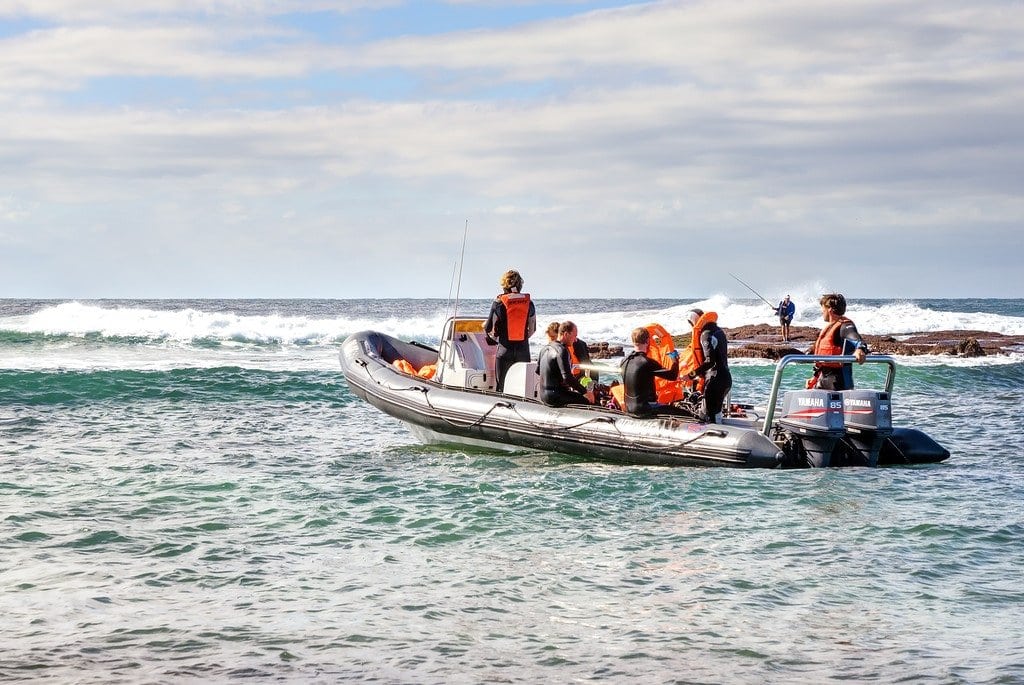 The ocean around me is filled with hungry sharks. In just a few minutes, the sea has become thick with them, approaching from all directions. My heart races.

I was under 30 feet of water, without a cage, off the coast of South Africa. It was impossible to keep track of all the sharks around me. I counted at least 9 in my immediate vicinity, with more dark shapes lurking in the murky depths below.

A nightmare scenario for those who are afraid of the ocean.

When most people think of sharks, they instinctively remember the horror movie Jaws. Razor sharp teeth. Beady black eyes. The ocean’s deadliest predator lurking beneath the waves, ready to strike without warning. 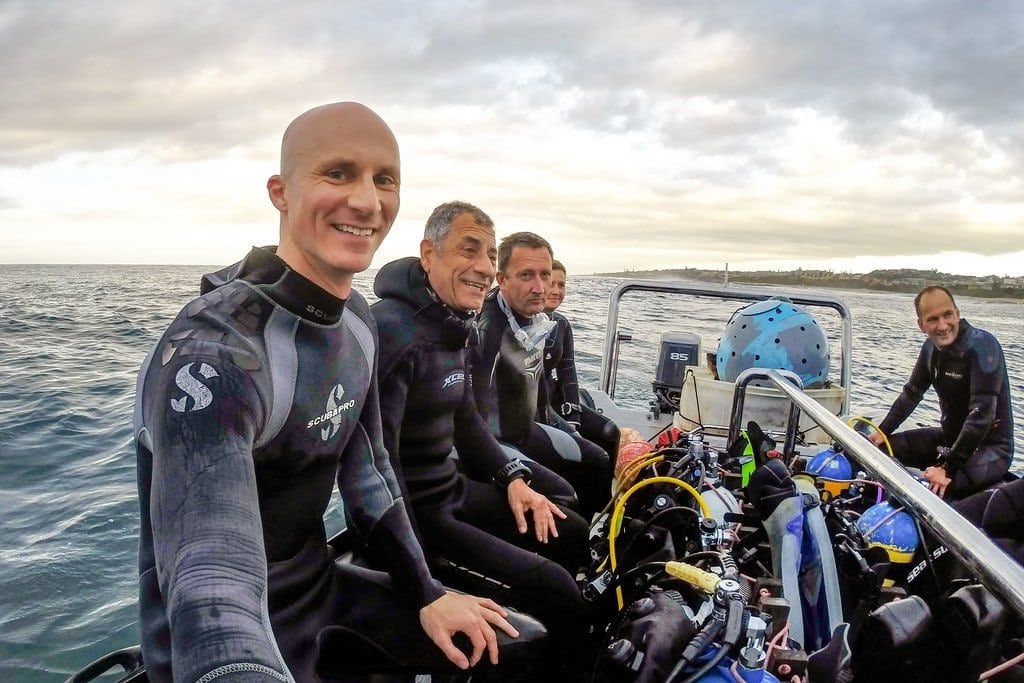 Motoring Out to the Dive Site

You’d think that hanging out underwater in shark territory would be the most dangerous place to be in the ocean. However our fears are not always rational — more often they’re primal. Based on emotion rather than facts.

For most people, fear is something they avoid at all costs. For others, it’s what drives them. I consider myself the latter. It’s a personality trait known as sensation seeking — someone who thrives on adventure, risks, and sensory overload.

While swimming with sharks is not as dangerous as it seems, that doesn’t mean it won’t give you a good jolt of adrenaline anyway. 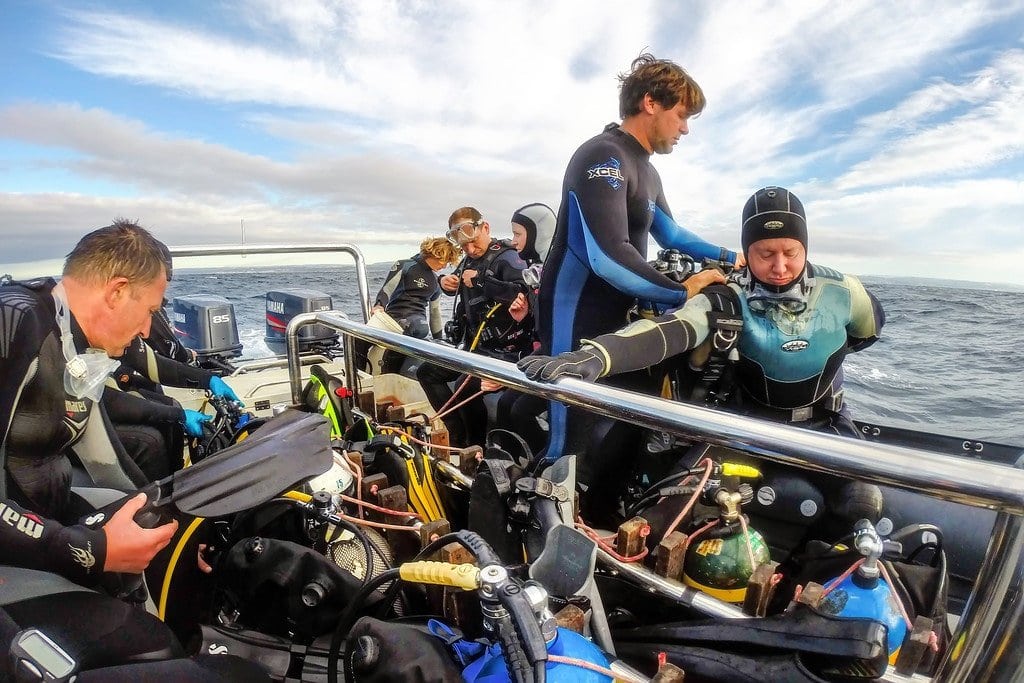 Strapping on the Dive Gear

This is actually not my first time scuba diving with sharks. I’d met them up close and personal once before in Fiji, also without a cage.

Sharks are beautiful, powerful, agile creatures. Capable of both extreme violence and incredible elegance. Attacks on humans are exceedingly rare, despite all the negative media attention they receive.

Don’t believe me? Talk with anyone who spends significant amounts of time with them. Like marine biologists or scuba dive masters. Sharks deserve respect, not irrational fear.

Yes, some species attack humans from time to time.

It happens when they mistake us for animals they normally eat, like seals. But deep underwater, in their world, these intelligent animals are smart enough to know we aren’t on the menu. 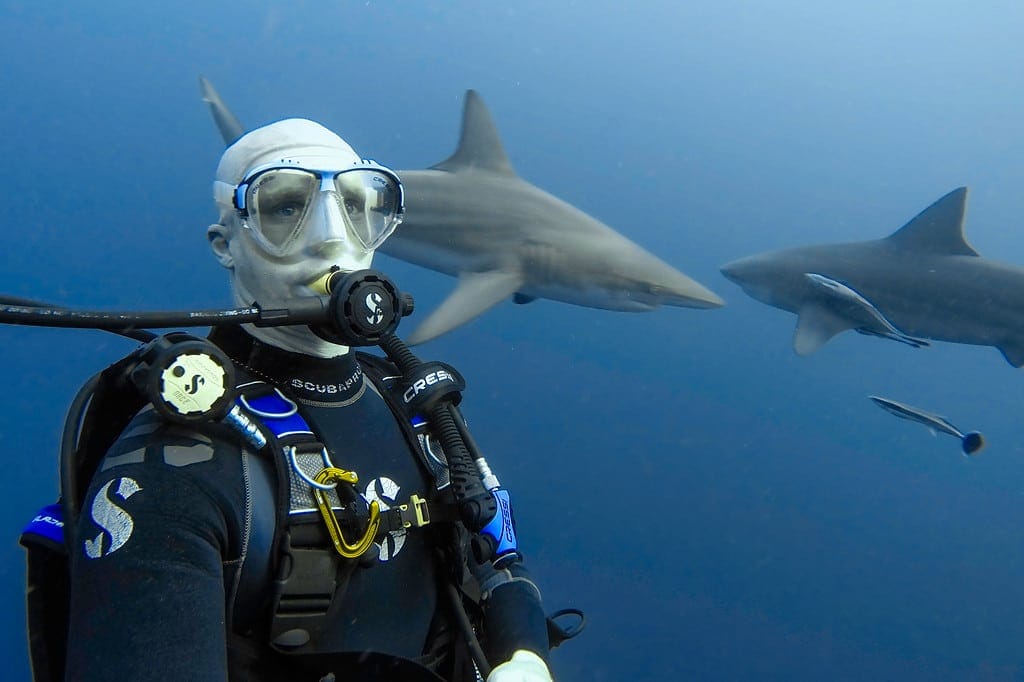 In fact, sharks are often more frightened of us. As our group of divers first descended under the waves at Protea Banks, we actually scared off a large tiger shark. Tiger sharks are responsible for the 2nd highest number of attacks on humans. Yet this one wanted nothing to do with us.

Too bad, as this is the type I was most looking forward to meeting!

Protea Banks is home to all kinds of different species of shark like Black Tips, Bull Sharks, Tigers, Great Whites, Ragged Tooth, Hammerheads, and many more. They come to feed on large schools of tuna that thrive here.

It’s one of the few places in the world you can dive with 12 foot Tigers.

On this dive we encountered mostly Black Tip sharks, 4 to 5 feet long. A school of them circled the bait ball, a plastic device filled with fish heads that sharks can’t actually eat. After initially keeping their distance, they relaxed and had no problem swimming up to say hi.

The bull sharks were more skittish. I could see a few down below. Bull sharks are responsible for the 3rd highest number of attacks on humans. I found it kind of funny that one of the most dangerous species of sharks was also the most scared of us. 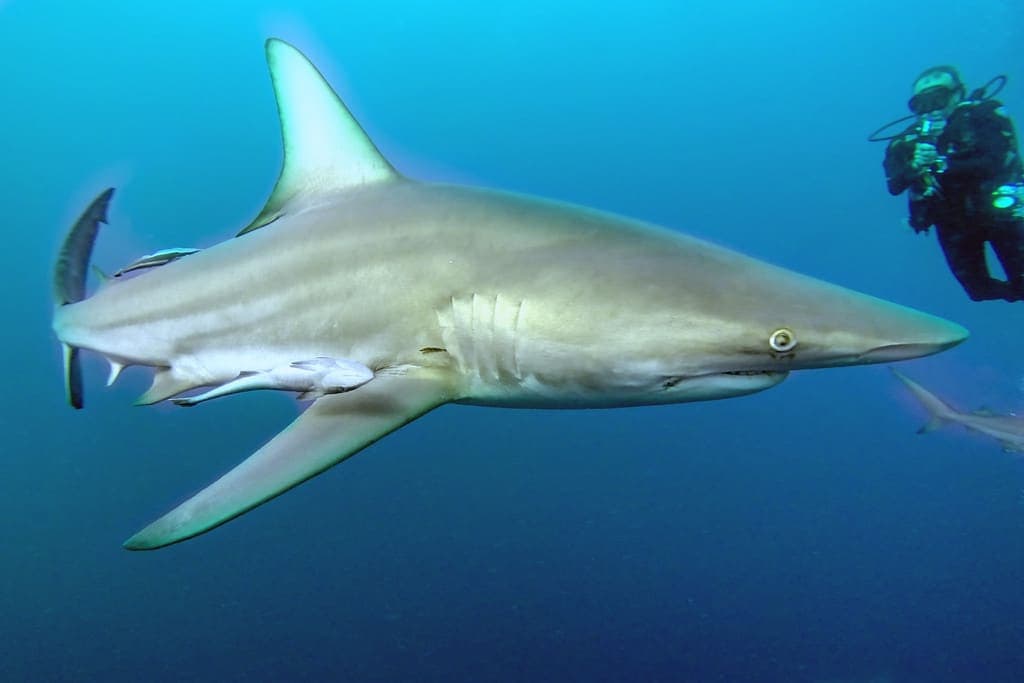 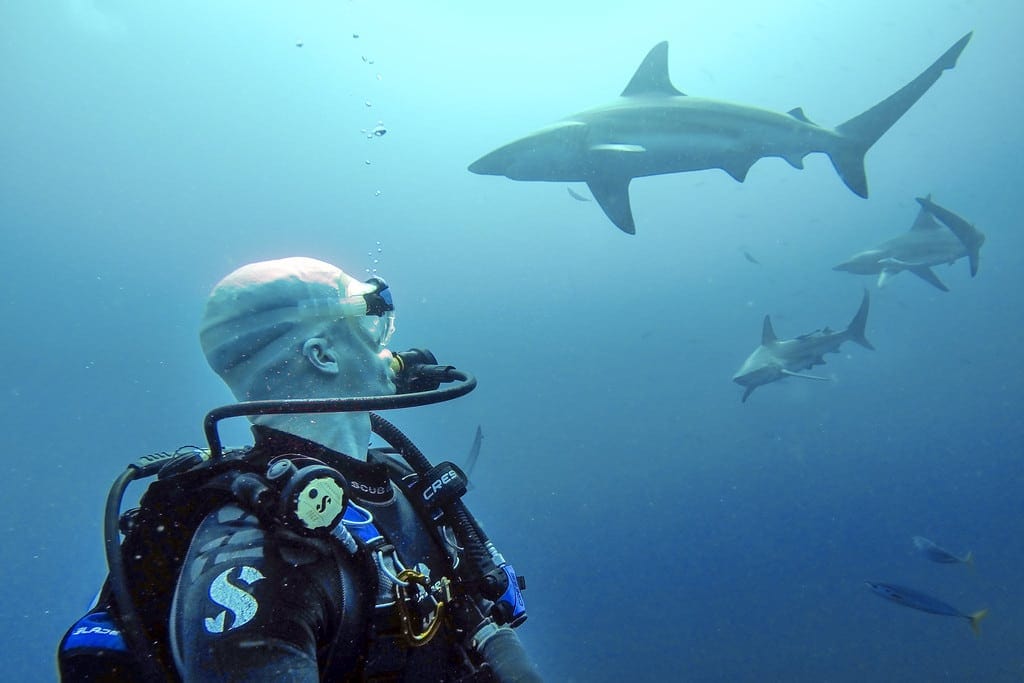 Diving with Sharks at Protea Banks

We spent an hour diving with the sharks at Protea Banks before surfacing to return to the boat. I’ll never get sick of these experiences. Visiting the underwater world is about as foreign as it gets, aside from outer-space.

The more time you spend in the company of sharks, the more your fear of them is transformed into respect and admiration. Sharks are beautiful, marvelous creatures.

Unfortunately they are getting killed off at an alarming rate.

Millions of sharks are fished out of our oceans annually. No wonder they’re afraid of us!

So when you hear about “attacks” like the recent one at a Jeffreys Bay surf competition, understand that we are the ones attacking their territory. We don’t own these oceans, yet we seem to love killing everything in them.

Sharks don’t even like humans — occasionally they just mistake us for something else. Maybe we deserve it. ★ 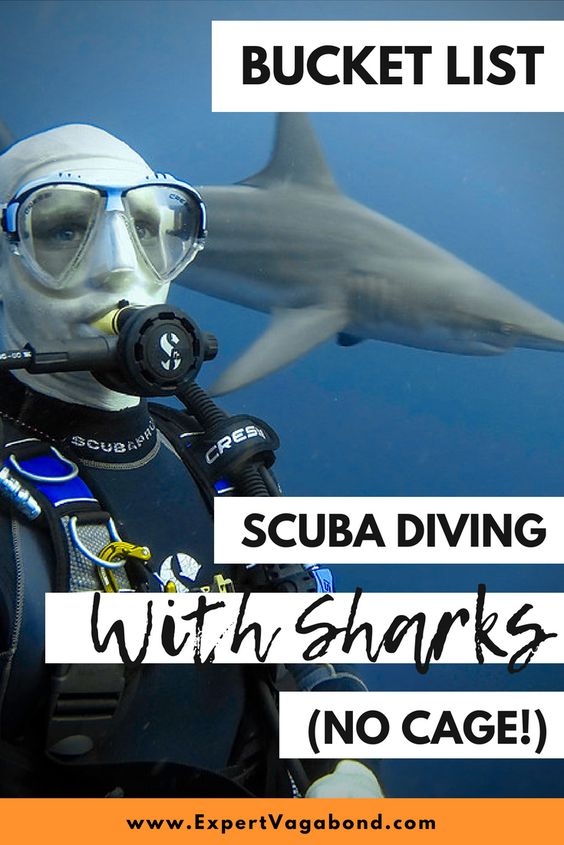 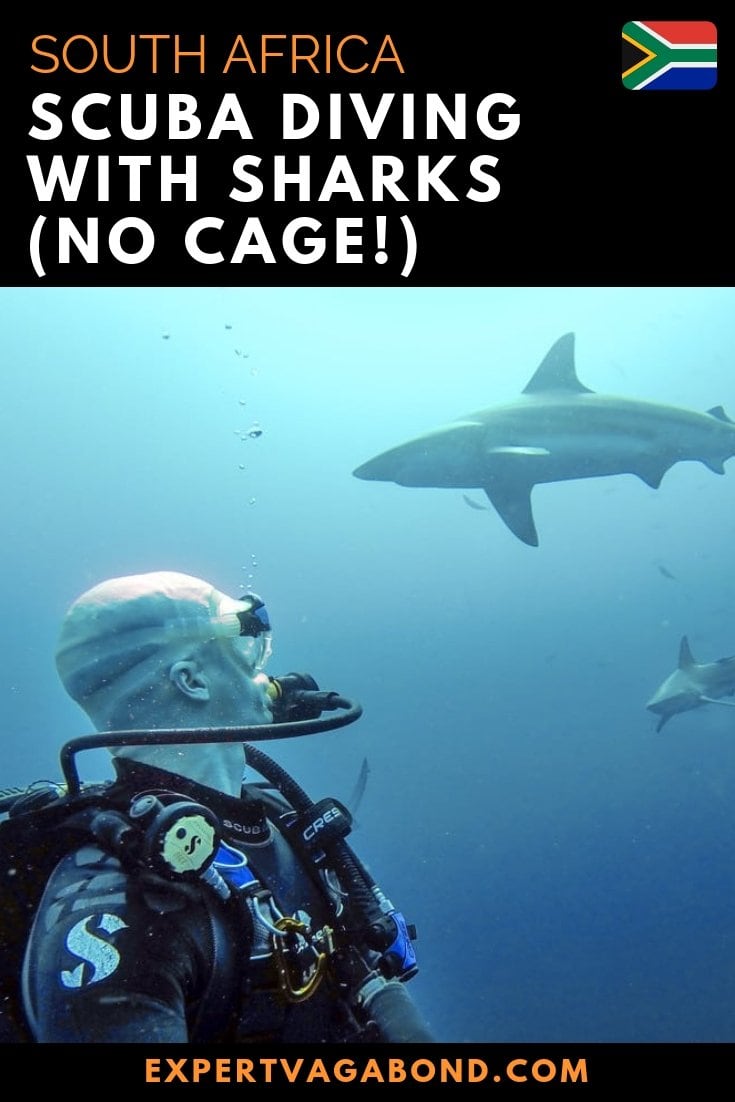 I hope you enjoyed my guide on scuba diving with sharks in South Africa! Hopefully you found it useful. Here are a few more wanderlust-inducing articles that I recommend you read next:

Disclosure: Some of the links in this post are “affiliate links.” This means if you click on the link and purchase the item, I will receive an affiliate commission. Regardless, I only recommend products or services I use personally and believe will add value to my readers.