Join me for an epic trekking adventure into the beautiful Kackar Mountains in Eastern Turkey where raw wilderness and ancient lifestyles leave lasting memories.

The Kaçkar Mountains are located in northeastern Turkey, not far from the Black Sea. The highest peaks reach an altitude of 3,937 meters (12,917 feet).

Hiking in these mountains is quite a treat, as they aren’t quite as popular as other mountain destinations like the Italian Alps, so there are far fewer tourists.

However they aren’t completely “wild” either, meaning there is some infrastructure in place for day hikers and overnight trekking.

The Kackar Mountains are interspersed with yaylas, or rural mountain villages inhabited by nomadic herders who bring livestock to graze in the high pastures during summer months.

Getting To The Kackar Mountains

To reach the Kackar Mountains, I flew into the Turkish city of Trabzon. After stocking up on some basic hiking supplies in Trabzon — like cooking gas and backpacking food — I hired a minibus taxi (called a dolmuş) to take me to the pretty mountain resort village of Ayder.

There is a mountain road that continues past Ayder to another village called Yakari Kavrun. You can walk this road, or hitchhike, like I did. The road mostly follows the swollen Kavron River rushing with fresh snow melt.

There were some other yaylas along the way, however many were abandoned, and a few showed signs of life as locals began returning with their animals.

While Ayder was bustling in June, Yukari Kavrun was still mostly closed. It was too early in the season. The actual mountain trail into the Kackars started above the village in Yukari Kavrun.

The people living in the Kackar Mountains come from all over. Their ancestors were originally from Armenia, Greece, Georgia, Russia, even Uzbekistan. They make a living herding cows and sheep; producing delicious cheese, yogurt, and some of the best honey in the world!

Not long after I started my hike, I stopped briefly for lunch on a hill surrounded by colorful orange, yellow, and purple wildflowers. A jagged wall of snow-capped peaks loomed ahead as I hiked on.

Weather can change quickly in the Kackar Mountains, and it happened to me. The blue-bird day was soon consumed by a blanket of dark clouds rumbling with lightning and thunder. Then came the hail!

I was forced to retreat into a valley and find cover as lightning repeatedly struck the exposed ridge in front of me. Hastily constructing an emergency shelter using a rain tarp and crawling under just as the worst weather hit.

CRACK! BOOOOOM! It was the loudest thunder I’ve ever experienced, practically shaking the mountain beneath me. Soon followed by blinding flashes of lightning.

I love crazy weather, but this was pretty scary. Hail hammered down from the heavens — closer than usual here at 8,000 feet.

The bad weather passed almost as quickly as it arrived though. I emerged from my shelter to begin hiking again, searching for a decent camping spot.

Stopping to set up camp and prepare hot tea beside a deep blue alpine pond as the sun dropped below the horizon.

What kind of shelter was I packing? A hammock of course! But at these altitudes there are no trees… only rocks. However you’d be surprised at just how versatile a camping hammock can be. A set of rock climbing nuts, a large trash bag, and a foam pad turns a hammock into a traditional bivy sack for sleeping on the ground.

The temperature dropped and I gazed at the stars in total silence for a while, drinking some olive oil and doing pushups to build up some body heat before climbing into my sleeping bag for the night.

The next morning was cold and sunny. I scarfed down some bread, honey, and trail mix for breakfast before heading back out on the trail.

Walking down into a valley through snow towards another mountain lake. The sunlight didn’t last long though, and dark clouds soon moved in for a 2nd day, threatening to delay me again.

I managed to hike up and over the pass after taking shelter under a rock for an hour as another hail & lightning storm floated by.

The trail here is almost completely hidden from view under a layer of snow, which usually sticks around until mid July in the Kackar Mountains.

There were a few tricky sections where the snow was deep, but I made it down into the next valley after about 6 hours of hiking — and what a beautiful place it was!

The area is called Dupeduzu, a popular camping spot in these mountains. Fields of blinding white snow morphed into lush green grass covered with vibrant wildflowers.

The soundtrack to this paradise? Gushing rivers winding down from the steep mountains above.

After camping out for a 3rd day in the mountains, I hiked down to lower altitudes in order to stock up on food. Luckily there are many yaylas not far away where it’s possible to buy basic supplies like bread, cheese, trail mix, canned tuna, olives, and beans.

Because it was still early in the season, some villages are sparsely populated or completely abandoned. It took me a few hours to reach one of the larger villages called Olgunlar.

They have a few small guesthouses here, and an early morning dolmusch (public taxi) that will take you out of the mountains on a dirt road.

Once stocked up for another 2 days of trekking, I left Olgunlar on foot to begin climbing towards my ultimate goal, a stunning high mountain lake called Deniz Golu, and maybe a summit attempt on Mount Kackar itself, depending on hiking conditions.

On the way I encountered more streams to cross, local Muslim shepherds leading their sheep and cattle out to the freshest grazing pastures, and plenty of butterflies. The same reason this area produces the best honey is also why there are so many species of butterfly around…

The Kackar Mountains have an incredible amount of diversity when it comes to wildflowers!

I pitched my hammock/bivy beside a large boulder at the Dilberduzu camping area, where there’s actually an outhouse due to the large number of local hikers who pass through for summer mountaineering adventures. I finally ran into a few other hikers here too.

On the morning of my 4th day I rose with the sun to climb as high as I could into the Kackar Mountains. It didn’t take long to reach snow, and a majority of my hike was spent on it. Not fully equipped to trek in these conditions, I was using small garbage bags to line the inside of my shoes — a type of poor-man’s GoreTex.

While your footwear gets soaked on the outside, your feet themselves stay pretty dry. Most of the snow was well compacted by this point anyway, so I only sank down to my ankles.

The effects of altitude hiking at 10,000 feet was taking its toll — catching my breath was a bit more difficult and slowing me down. But after about 2-3 hours of scrambling up over rocks, I made it to lake Deniz Golu, which unfortunately was still frozen over!

Too bad, as I’d previously seen photos of the lake, and it’s a spectacular shade of blue.

I hiked further up to 11,000 feet searching for a high vantage point for capturing photos of the amazing landscape around me. Mount Kackar itself was covered in a thick layer of clouds & fog, and with no discernible trail in the snow, it wasn’t safe for me to continue on my own. Especially without proper gear.

So what is the quickest way to descend a snow-covered mountain? Extreme sledding of course!

I used my sleeping-mat as a makeshift sled, and it was super fun.

While walking out of the Kackar Mountins I discovered a group of local women preparing a picnic in the grass next to an abandoned yayla. They waved me over and insisted I join them. Tasty homemade food and boiling hot tea was just what I needed after 4 days in the wilderness…

Our language barrier was high, only knowing about 5 words in each other’s native tongue. But with lots of smiles and hand gestures, we had some awkward yet amusing conversation.

I thanked them and walked on to Olgunlar, checking into a guesthouse and catching an early morning taxi out. ★

Where To Stay In Rize

So, the area I was hiking is located in the Rize District of Turkey. I stayed in two different guest houses before and after my hike. 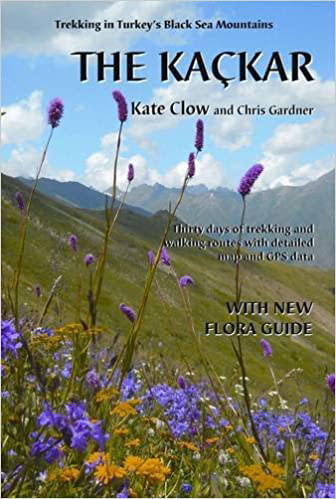 Looking to plan your own hike? Check out “The Kackar: Trekking in Turkey’s Black Sea Mountains” by Kate Clow.

I hope you enjoyed my guide to hiking Turkey’s majestic Kackar Mountains! Hopefully you found it useful. Here are a few more wanderlust-inducing articles that I recommend you read next: