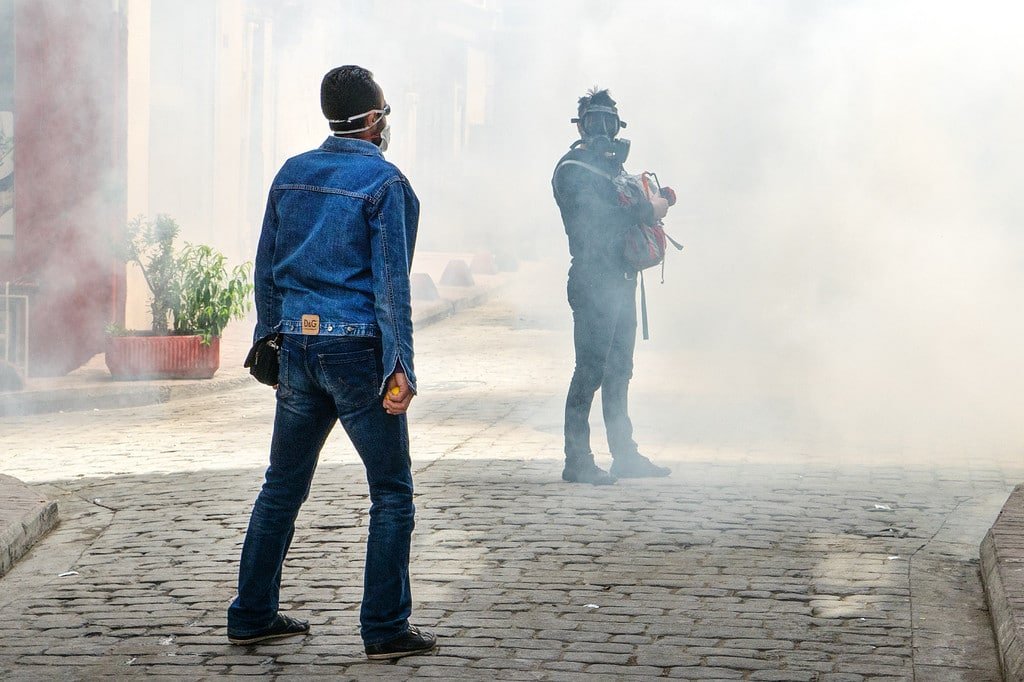 Violence erupted in Istanbul this weekend on the anniversary of the Gezi Park protests. The past few weeks have seen at least 2 deaths and many injuries.

Last month on May 1st I was tear gassed by police as they clashed with protesters in the immigrant community of Tarlabasi where I was staying. Protesters were attempting to get to Taksim Square, site of the notorious 1977 May Day Massacre where some 36 people died when unknown gunmen opened fire on the crowd of 500,000 from rooftops over the square.

Ever since, gatherings in Taksim have usually been prohibited on this day. Turkish Prime Minister Erdogan banned protesters from entering the square to celebrate the holiday again this year, closing down parts of the city and sending an army of 40,000 police and 50 water cannons in to keep order and squash any resistance.

But labor unions and leftist political groups showed up anyway, armed with slingshots, gas-masks, fireworks, and molotov cocktails ready to start a fight. 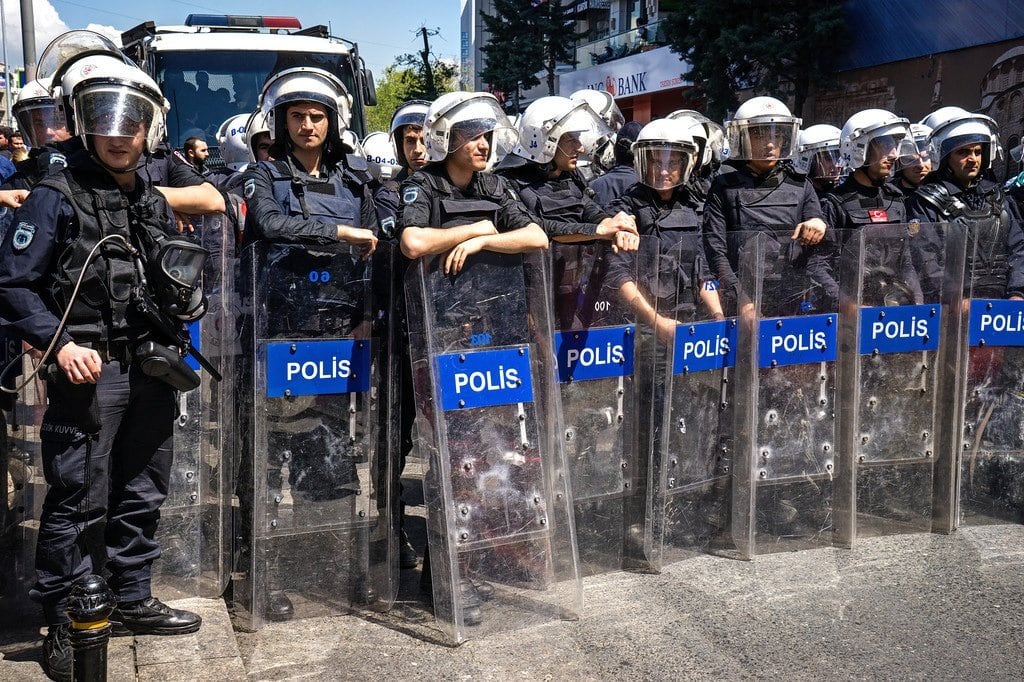 May Day Protesters Prepare for Clashes

Admittedly I went out into the fray with my camera to cover the action. Joined by fellow travel blogger Becki Enright, we donned scarves and long sleeves to protect ourselves from the gas.

We stumbled into one of the main protest groups who were wearing red masks and yellow hard hats. They were attempting to bypass riot police through side streets. Some of them carried a large cardboard box full of molotov cocktails, which are beer bottles filled with kerosene and a cloth fuse.

Violence suddenly broke out when police arrived. It was complete chaos with fireworks launched at riot police and tear gas canisters landing in our vicinity, filling the air with smoke.

This was my first tear gas experience, and let me tell you, it isn’t pleasant!

The choking gas burns your eyes, nose, throat, skin, and makes you cough uncontrollably. You want to run in the opposite direction to find fresh air. But there is nowhere to hide, because the gas is everywhere. 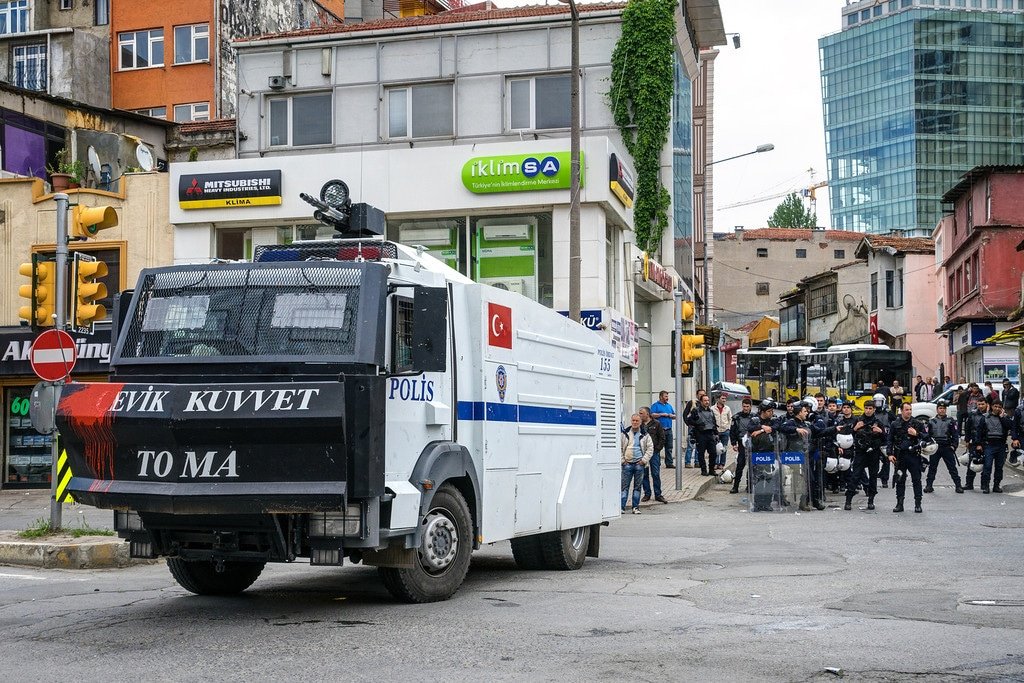 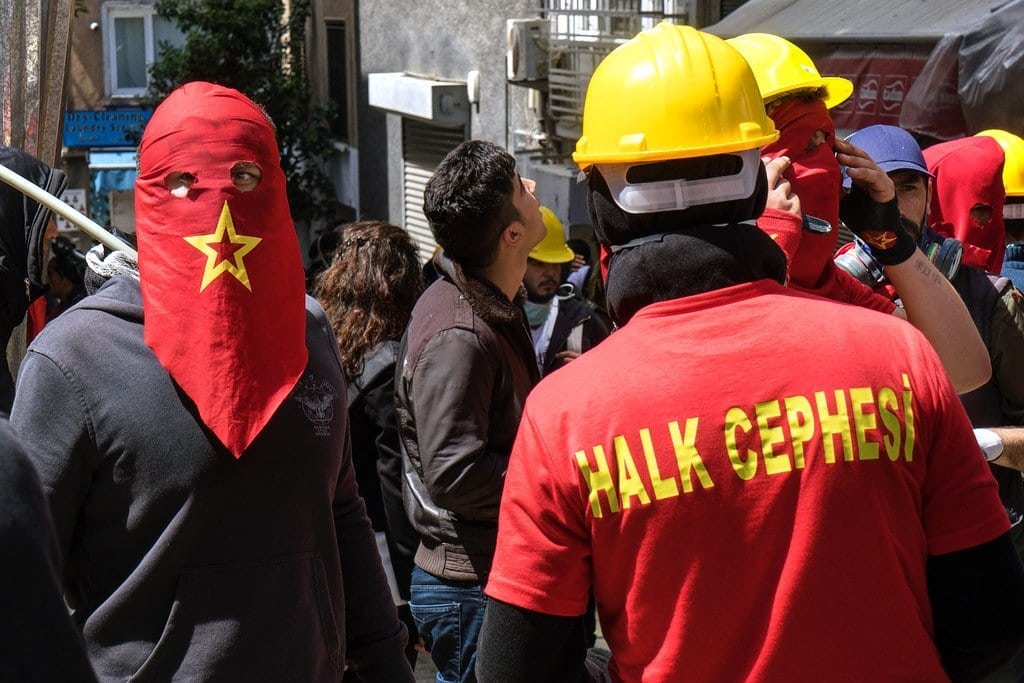 Violence In The Streets

Protesters were prepared though, firing rocks at the front line using slingshots. Then came the fire bombs! Men would light the fuse on a molotov cocktail, run up the street swinging the projectile in an arc before finally tossing it at officers who were hiding in a defensive formation behind riot shields.

When the bottle breaks in front of them, kerosene fuel explodes into a giant fireball. I’ve never seen anything like it. This was not a peaceful protest. It was a riot.

Eventually the gas became too much for us, and we ran into a local Kurdish market to breathe as police with gas masks moved in. They managed to force protesters back deeper into the neighborhood. Two women came running out of their homes towards the store screaming while holding crying babies.

We then watched as people were arrested and dragged away. Fighting moved on to other areas, smoke slowly cleared, and locals emerged from their hiding places to survey the damage. It was a surreal and shocking experience, but we were unharmed. 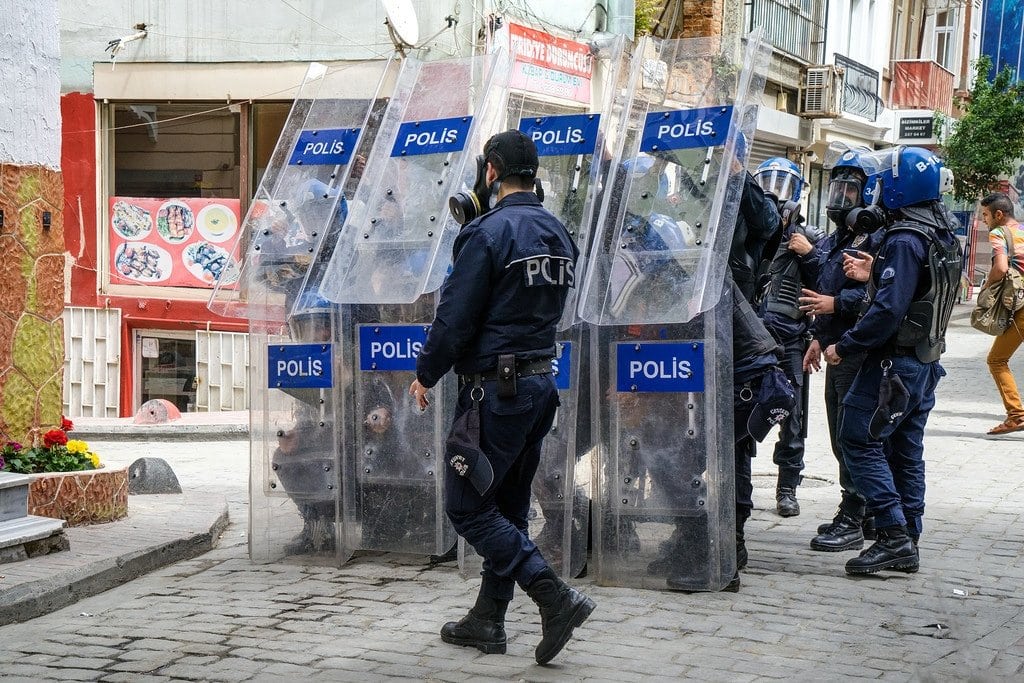 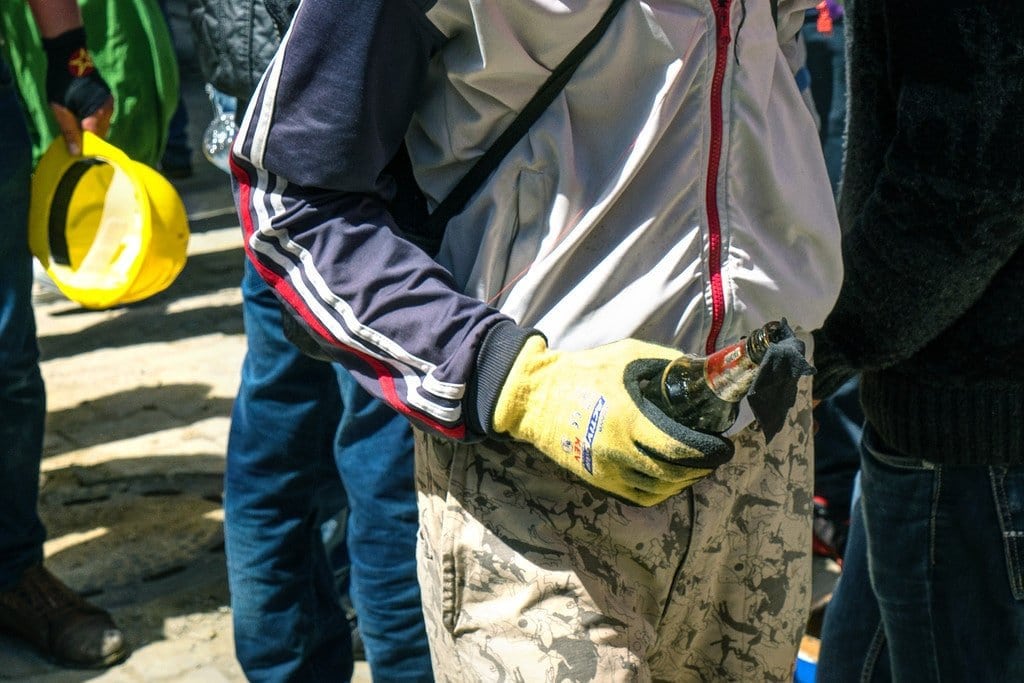 Mine Disaster & Other Deaths

Violence has been building all month. Over 300 people were recently killed in the Soma mine disaster on May 13th, many blaming the government after it privatized the company and safety standards went downhill.

Then 2 people were killed in the Okmeydani neighborhood of Istanbul on May 22nd during protests to remember Berkin Elvan, a 15 year old killed by police last year when he was hit in the head with a tear gas canister.

Members of the Revolutionary People’s Liberation Party/Front (considered a terrorist group by the United States) walked the streets of their community armed with shotguns and handguns.

A bystander was shot in the head by a stray police bullet after protesters threw molotov cocktails at armored vehicles. A 2nd man died when a homemade grenade exploded near police, wounding 9 other people. 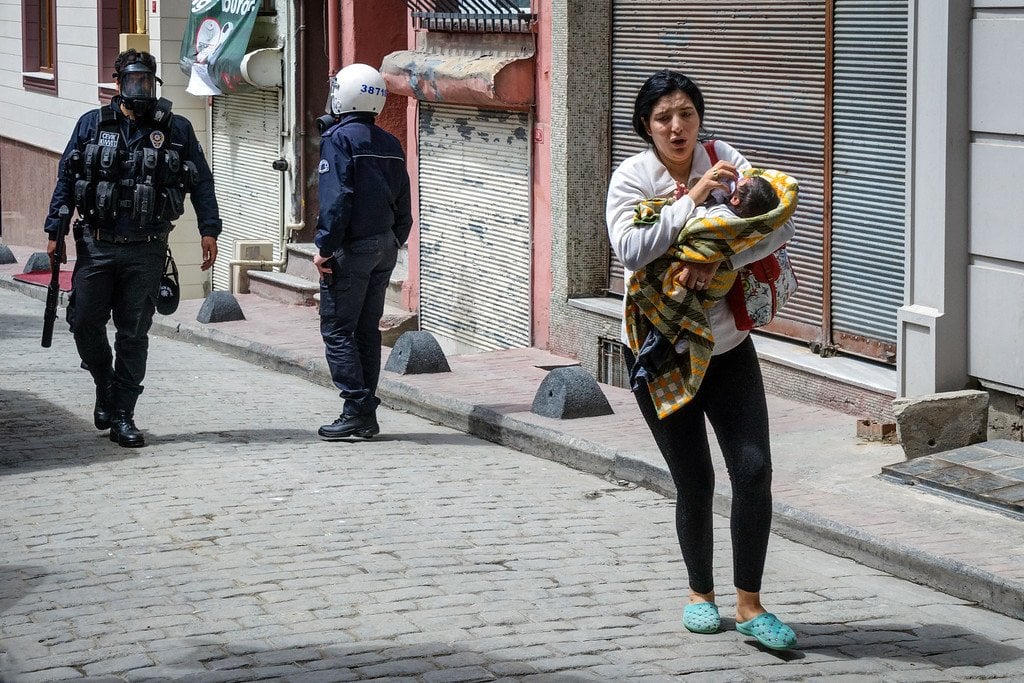 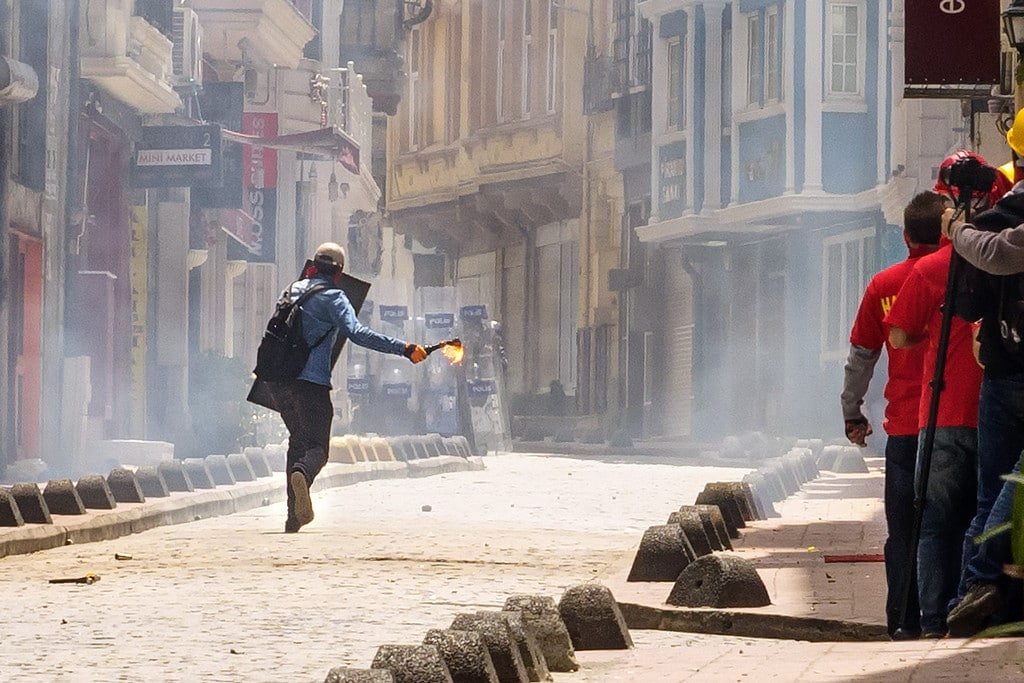 This weekend riots broke out yet again on May 31st, the anniversary of Istanbul’s Gezi Park protests last year. Taksim was closed off, and CNN reporter Ivan Watson was detained by police during a live broadcast. Later in the afternoon police used water cannons, tear gas, rubber bullets, and clubs to beat back thousands of protesters heading to the square.

I was was stranded across the water on the Asian side of Istanbul because ferries and other public transportation systems were shut down. But police fired tear gas at protesters that night in the Kadikoy neighborhood where I’m living. I heard at least 50+ explosions and the gas got into my apartment.

Istanbul wasn’t the only hot-spot this weekend though. Turkish travel blogger Anil Polat was detained by police in the capital city of Ankara while he was taking photos of the protests. He’s since been released. 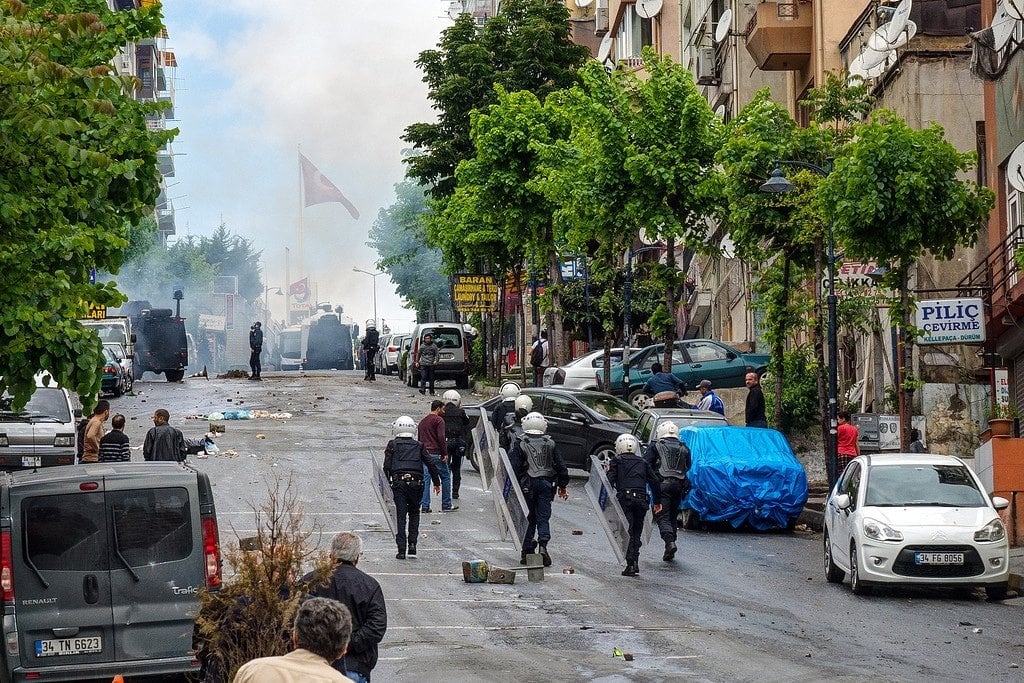 Riot Police Move in On Protesters

What Is Happening In Turkey?

I’m not Turkish, so I won’t speculate too much. But there is some civil unrest here right now. Large groups of people believe Prime Minister Erdogan should not be in power. But there are equally large groups who voted him back into office.

He is seen as rolling back the secularism that Turkey has been known for, instead of pushing for a more Islamic state. He’s been accused of corruption, intimidating journalists, jailing opponents, and more.

Earlier this year he tried to censor Twitter & YouTube throughout the country. Turkey is a very divided nation at the moment, and all these protests are proof of that.

However, once the protests are over, daily life appears to resume as normal. While walking around the tourist areas of Istanbul today it seemed like nothing ever happened.

So if you’re worried about visiting Turkey, don’t be.

In fact aside from this event, I had an epic time trekking through Northeastern Turkey’s Kackar Mountains.

Just stay away from any riots — unless you want to get tear gassed. ★

Here are some of my travel tips and stories that I recommend you read next:

Have you ever joined a protest before? Share your thoughts in the comments below!