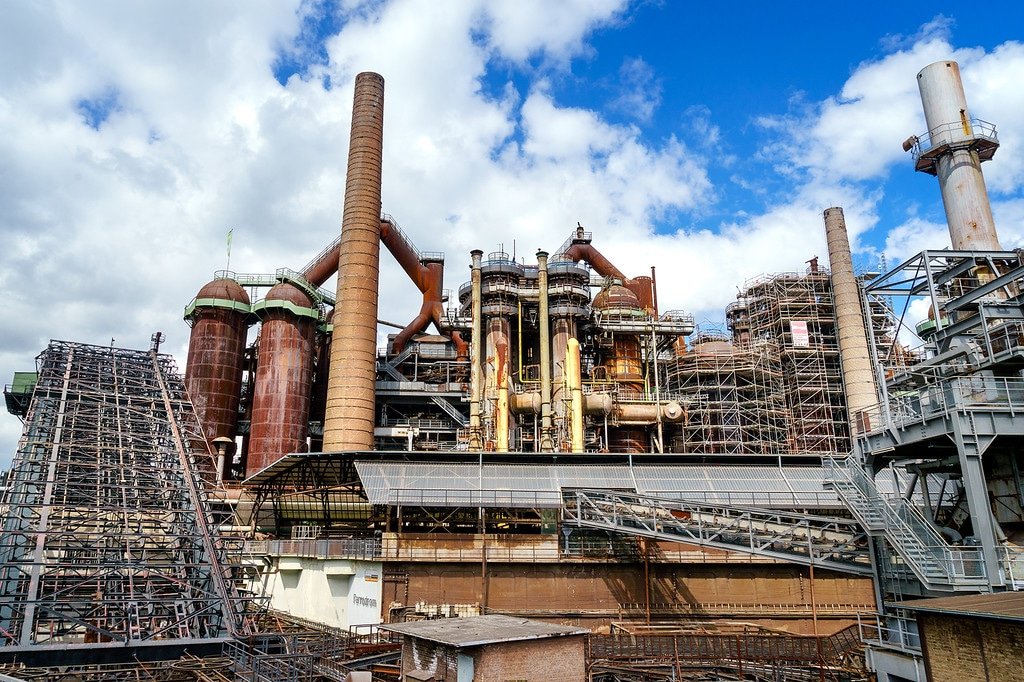 Do you know how steel is made? Volklinger Ironworks produced raw pig iron for over 100 years before it shut down in 1986. Now you can tour the old factory.

I really love abandoned buildings. There’s just something alluring about an old dilapidated structure slowly getting reclaimed by nature. A desolate and haunting kind of beauty composed of crumbling bricks, broken glass, and rusting iron.

I was in Germany for the Social Travel Summit, and decided to spend an additional few days traveling around the country. Specifically the state of Saarland along the border with France.

Arriving by train to the industrial town of Volklingen, I began exploring the last remaining 19th & 20th century ironworks facility in the world. Turns out this large & complicated smelting plant has an interesting history. 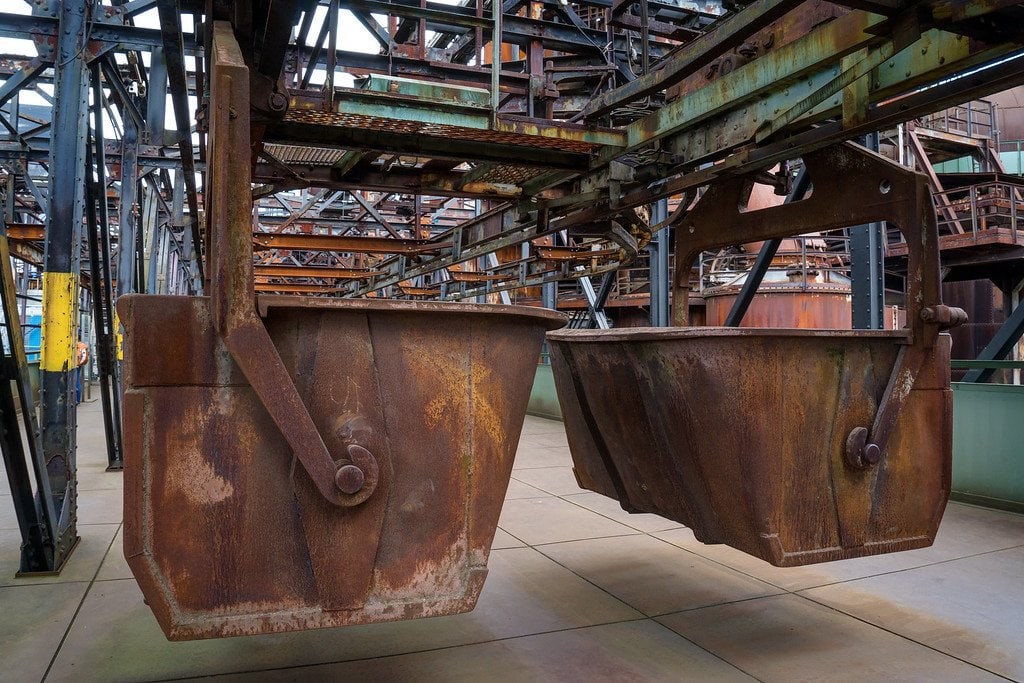 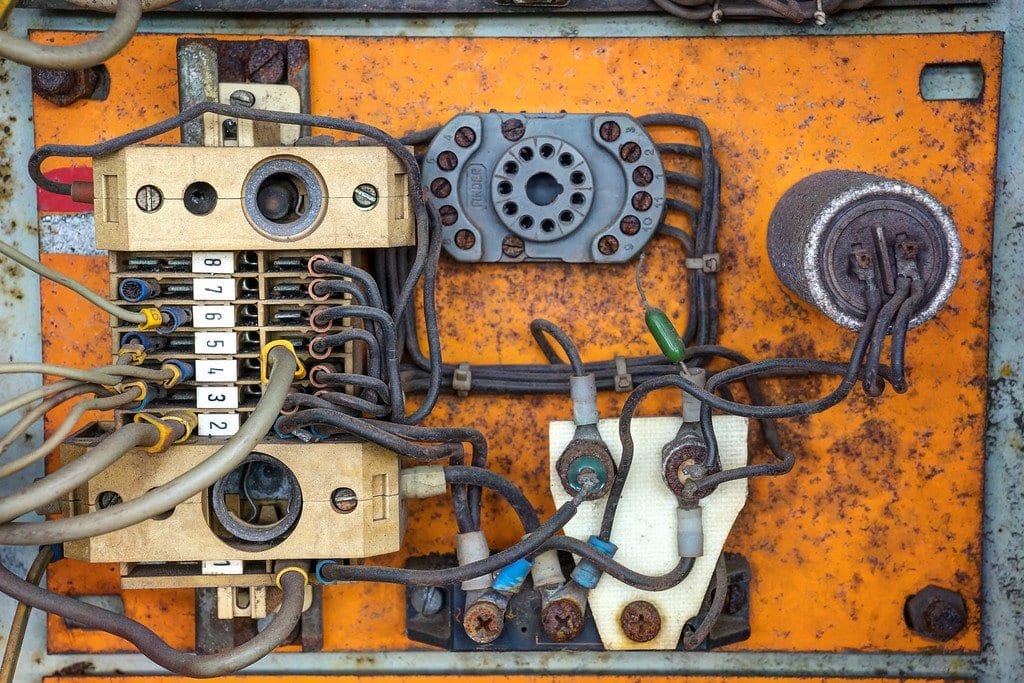 Originally built in 1873 for steel production, the plant was soon converted into an iron-smelter for the production of liquid pig iron. Pig iron is the major ingredient used to create steel.

For over 100 years it produced molten iron that was shipped via rail car to steel mills where it was then forged into steel beams. It was the largest steel producer in the German empire.

During World War 2 Volklinger was one of the only factories that wasn’t bombed by the allies — which is odd because it was the largest & most productive. This has fueled many conspiracy theories over the years.

Like the fact that factory owner Carl Röchling was a Freemason, as was US President Franklin Roosevelt. 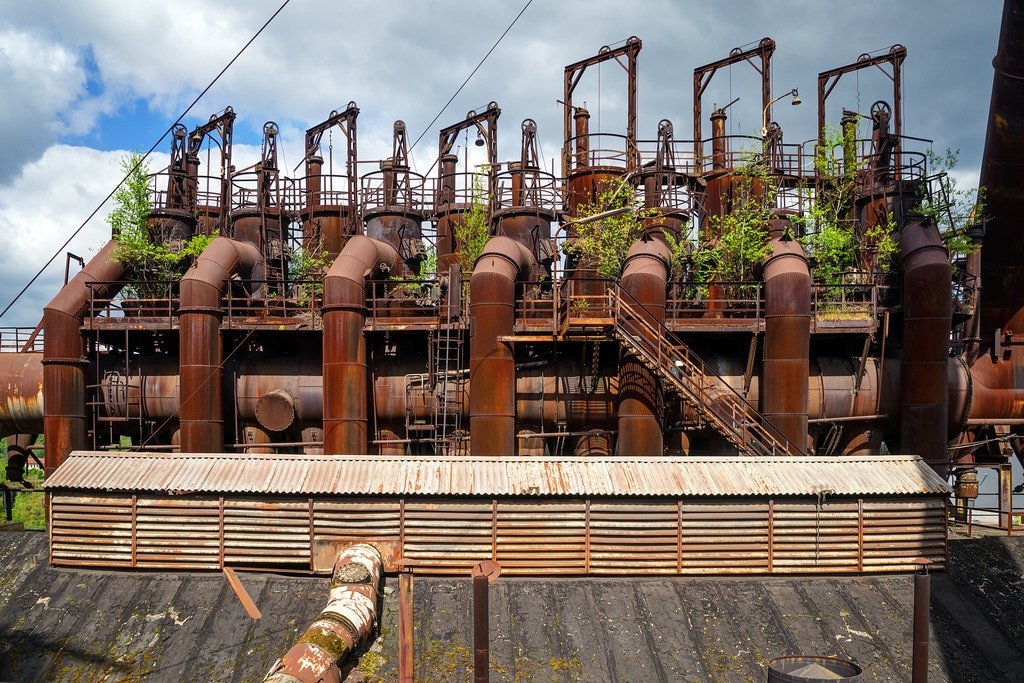 Nature Begins to Reclaim the Factory 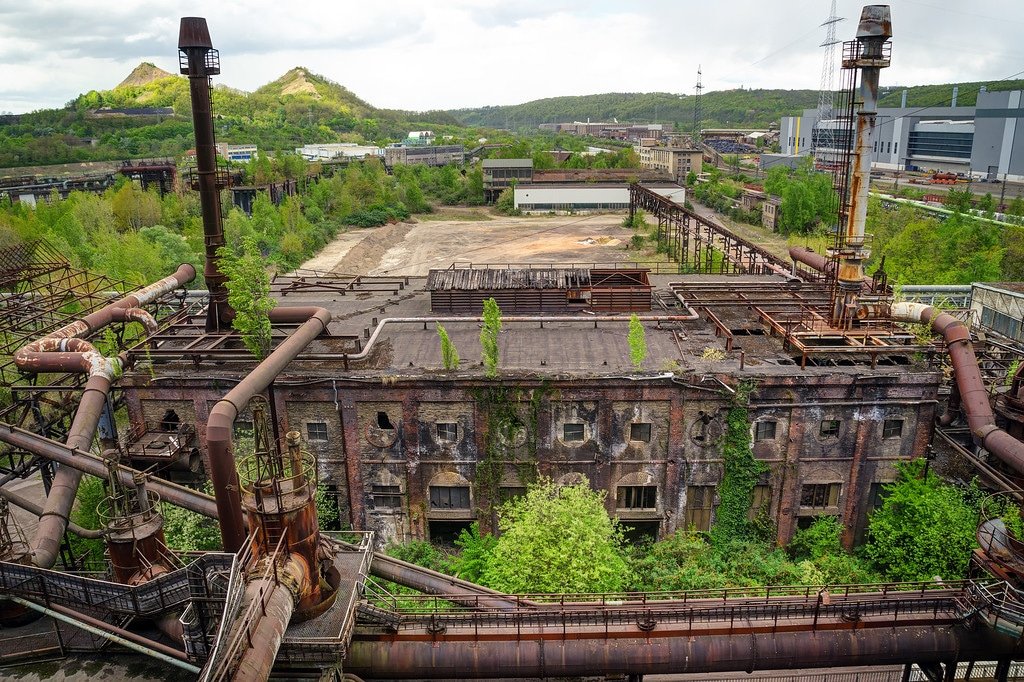 Man-Made Mountains of Slag in the Distance

How Steel Is Made

Steel is a metal alloy made from a mixture of iron and carbon. Too much carbon is bad though, as is too little. Raw iron ore mined from the Earth is the main ingredient, but it first needs to be concentrated before it can be used to create steel.

The blast furnaces at Volklinger Ironworks turned raw ore into pig iron using high heat, coke, and limestone to reduce oxygen and sulfur — producing a “slag” of impurities that floats to the top.

Then the pure molten iron can be drained out of the bottom of the furnace and loaded into special rail cars that take it to a nearby steel mill.

Excess carbon is burned off to make the correct mixture, and the hot metal is rolled into steel as we know it today. 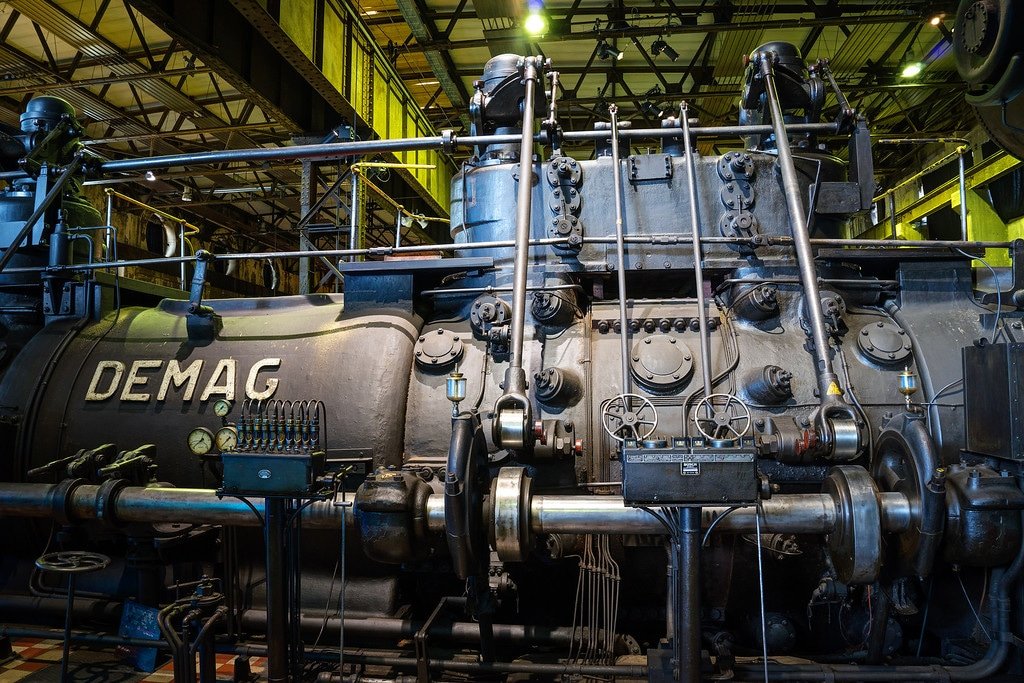 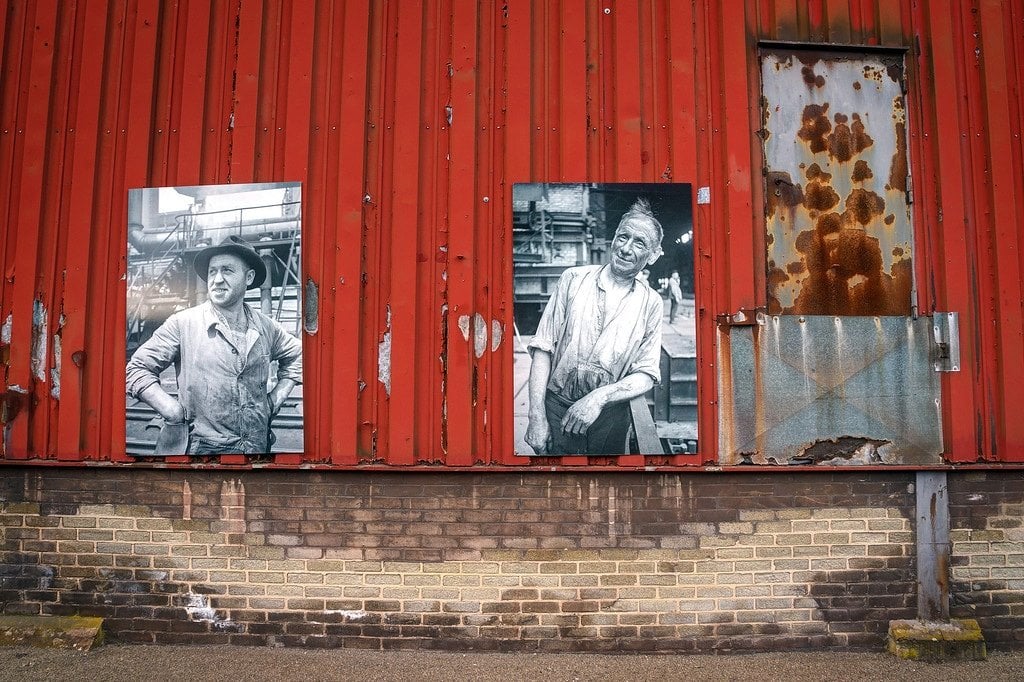 Life at an ironworks during the 20th century wasn’t easy. Extreme heat, exposure to the elements, backbreaking work, choking coal dust, dangerous machinery, and loud noise were just some of the unimaginable conditions employees had to endure on a daily basis.

At one point 17,000 people worked at the factory to keep production going 24 hours a day! The whole town of Volklinger sprung up just to support the iron smelter and its workers.

During the war prisoners were forced to work here producing steel for Hitler’s armies. 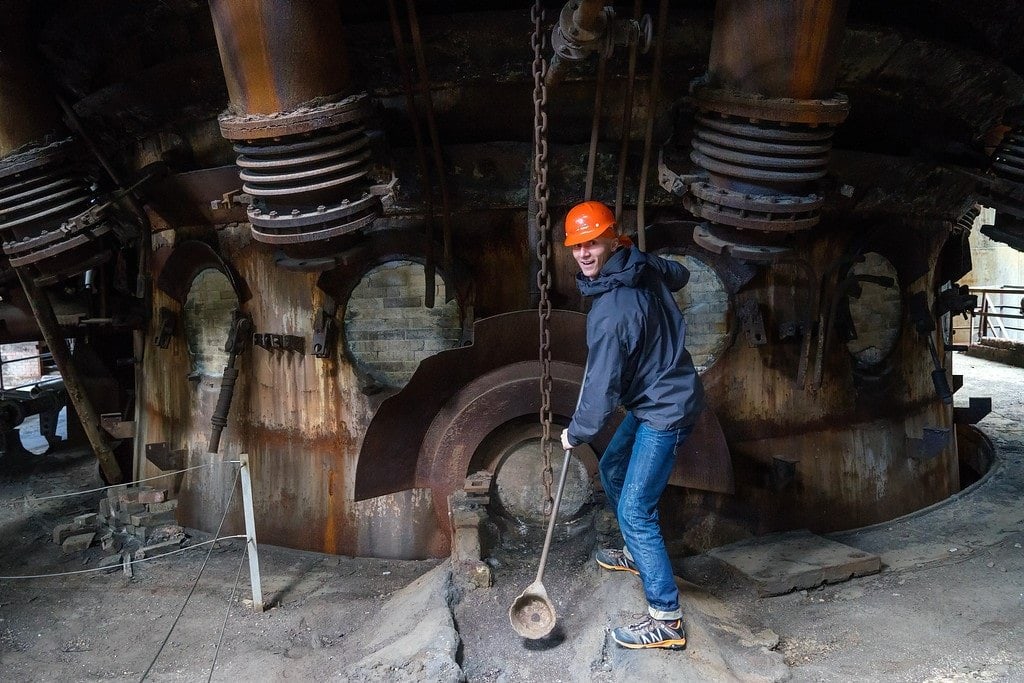 In 1994 Völklinger Hütte was designated a UNESCO World Heritage Site, allowing for safety improvements to the building and self-guided tours. Now anyone can visit and explore the rusting machinery, ancient gas-powered engines, towering blast-furnaces, and 40 meter high catwalks.

It was fascinating learning about the golden age of steel, and how it’s made. Arguably one of the most important products in the history of mankind.

I hope you enjoyed my guide to visiting Germany’s abandoned Volklinger Ironworks! Hopefully you found it useful. Here are a few more wanderlust-inducing articles that I recommend you read next: