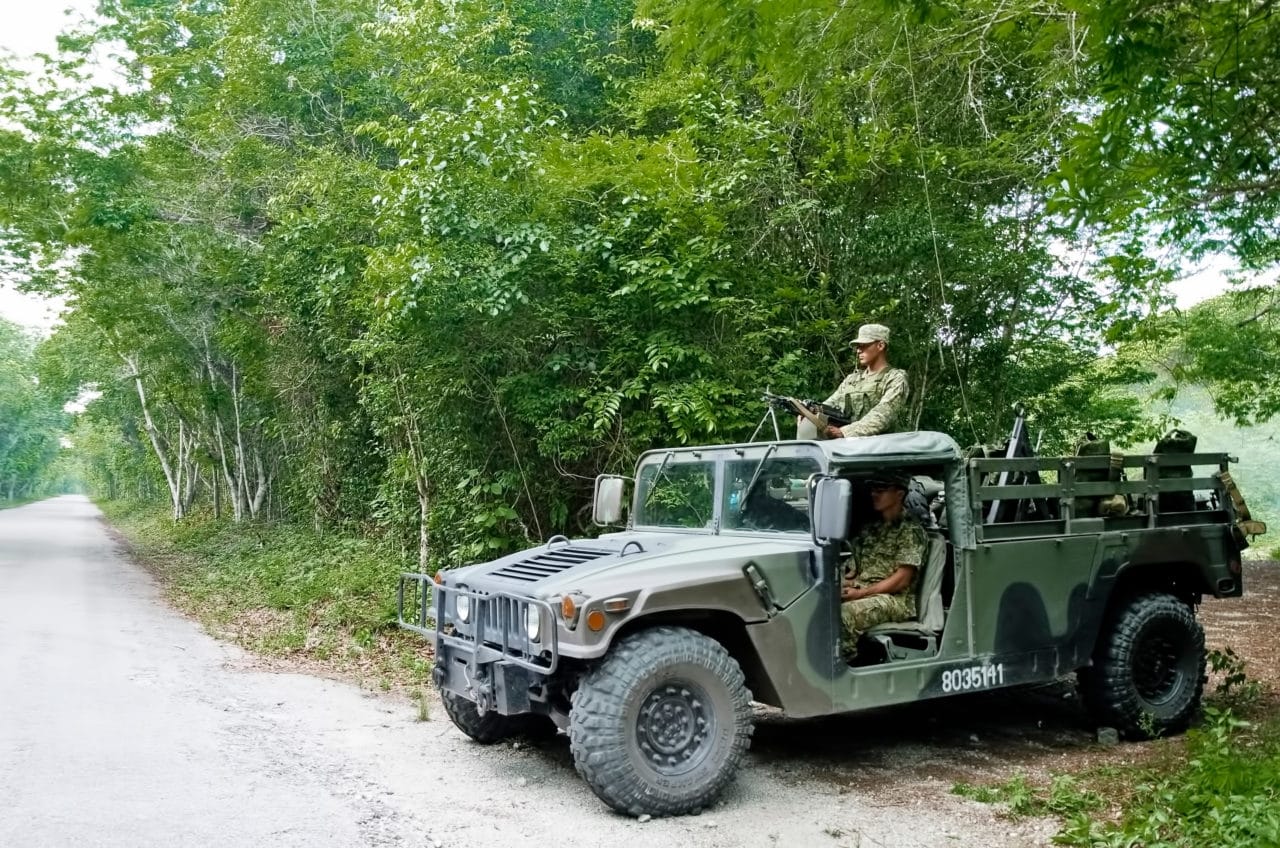 The ancient Mayan site of Calakmul is the place I’d most looked forward to visiting in Mexico. Why is this crumbling city number one on my list? Because it is located in a very remote part of the Yucatan peninsula in the middle of the jungle.

The soldier on top of the Humvee is aiming his giant machine gun directly at my face!

There are two reasons why the Calakmul ruins don’t get many visitors: it’s way out in the middle of nowhere, and it’s not covered in many guidebooks yet either.

But the site is well worth a visit because you can often be the only person there, and the ruins have not been cleaned up as much for tourism like Chichen Itza or Tulum.

After a long bus ride to the town of Xpujil, I found a taxi to take me to an tiny campground 37 miles away from the ruins. It’s the closest thing to civilization you will find out here. I don’t have a car with me so I rent a mountain bike from the campground, planning to get up at 4am and make the long trip through the jungle into the site. 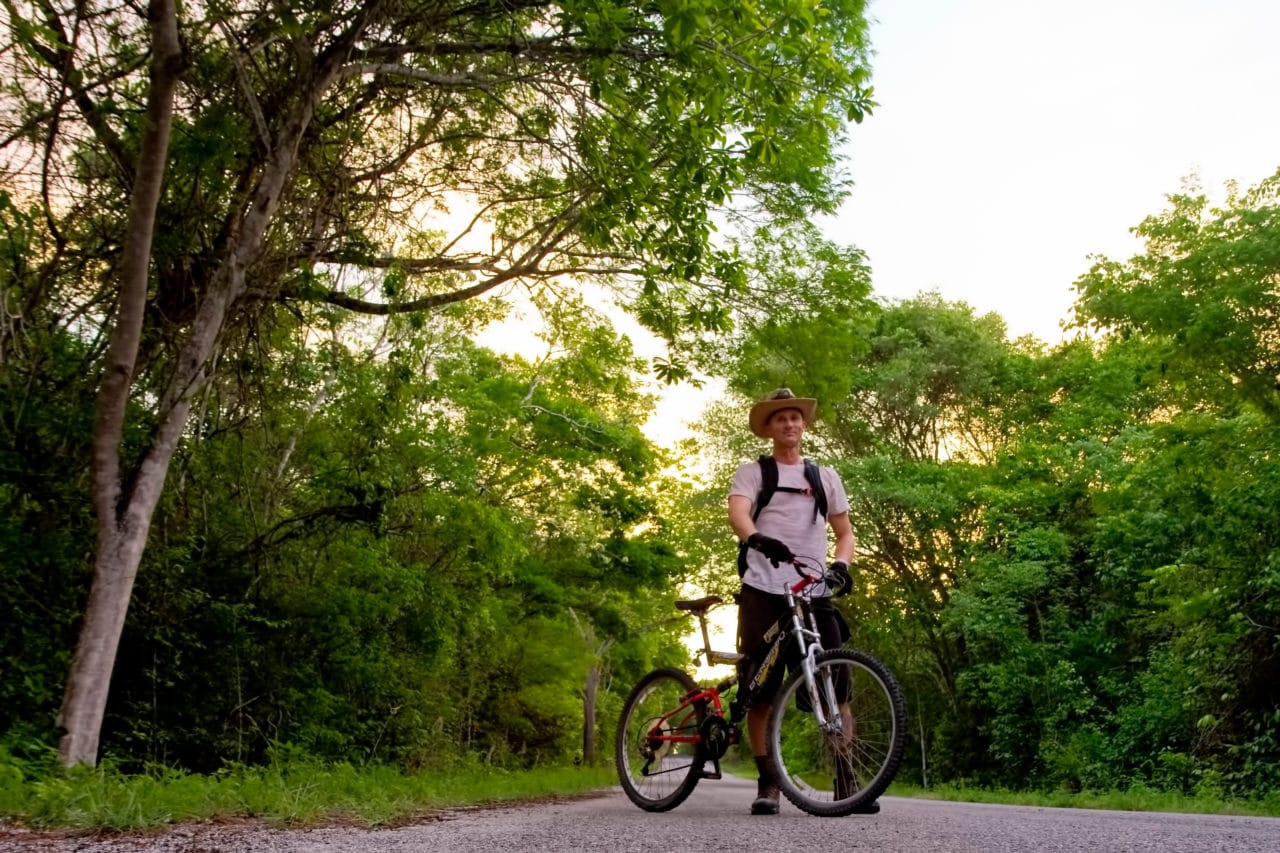 Stopped in the Jungle

The bike ride is refreshing but tough. Pedaling through the jungle before the sun comes up, I hear all kinds of crazy sounds and am only able to see where my headlamp is pointing. I sing out loud as I go, praying the jaguars in the area don’t decide to make an early morning snack of me!

After about 2 hours of hard biking, I suddenly start to see military trucks loaded with soldiers passing by.

That’s odd… I’m in the middle of nowhere right now. No homes, no buildings of any kind, only thick jungle. I haven’t even seen one other vehicle go by since I’ve been out here.

As I ride closer, the military vehicle quickly pulls out in front of me as 6 heavily armed soldiers walk up wearing very serious faces.

The soldier on top of the Humvee is aiming his giant machine gun directly at my face!

Obviously, I’m a bit worried at this point. What have I stumbled into???

But through some broken communication I gather that the road is closed, and I won’t be visiting the ruins of Calakmul today. They want me to turn around and ride all the way back to the campground, 2 hours away.

Mexico’s President Felipe Calderon is visiting the Calakmul ruins for World Environment Day! What are the odds… The one day I’ve been most looking forward to the whole trip, and had to work the hardest to make happen, has just been ruined by Mexico’s President. Damn you Felipe! 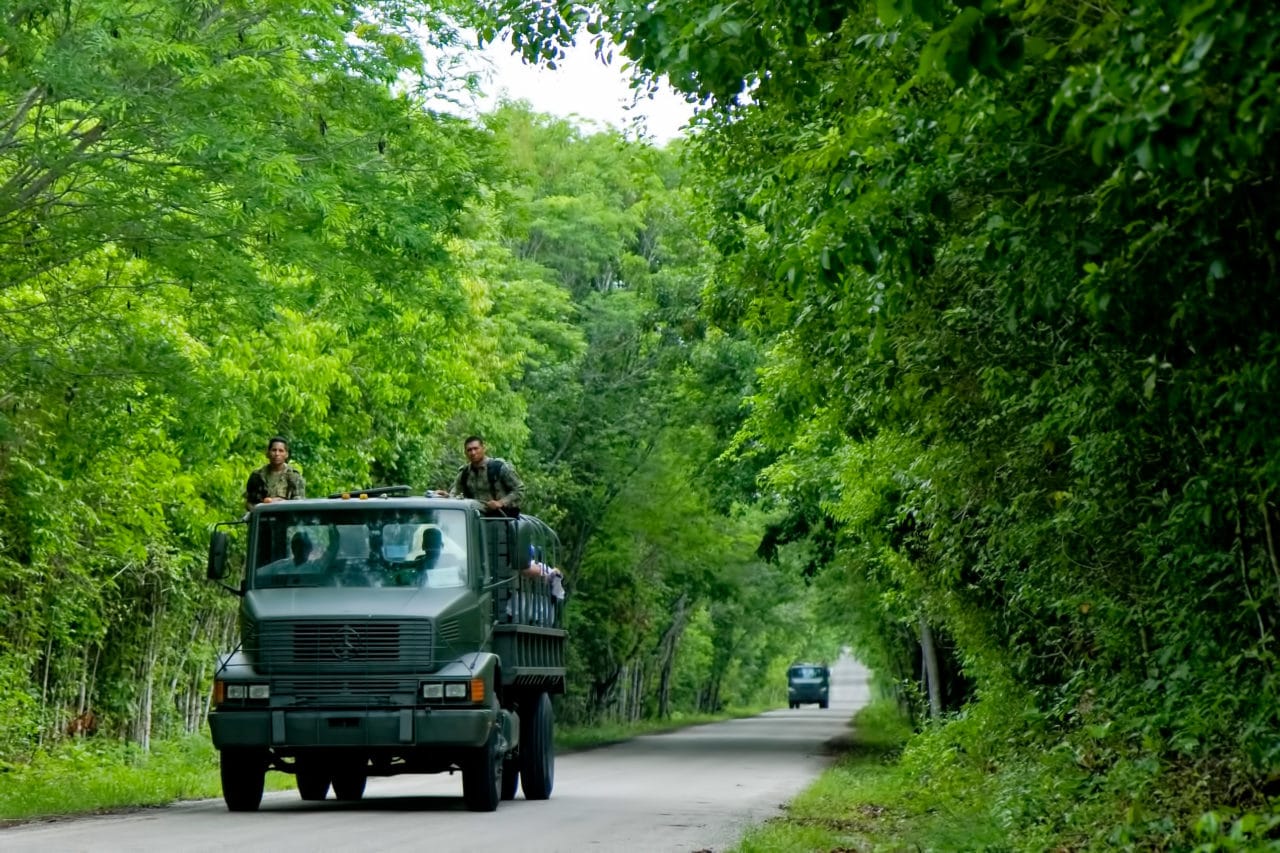 I’m not about to leave empty-handed though. Especially after risking early morning jaguar attacks and 2 hours of biking uphill in the middle of nowhere!

So I sweet-talk the troops into letting me take a photo, complaining of the long bike ride back with no images of the ruins. Most of them don’t want to be in it, but at least I’ll have something to show for all the time and effort I spent getting here!

Reluctantly I had to turn around and ride ALL the way back to my campsite in the hot jungle heat.

On the road back, a procession of white Government SUVs passed me in the opposite direction along with police trucks, more Humvees, 5 or 6 huge troop carriers loaded with soldiers, and some busses. I found out later there were 4000 Mexican troops guarding the President that day (the drug cartels are all out to get him).

So even though I rode a bicycle 24 miles into the forest for nothing, it turned out to be a pretty interesting time, and I still got to visit the ruins of Calakmul the next day.

I hope you enjoyed my story on how the Mexican President ruined my day! Here are some wanderlust-inducing articles that I recommend you read next: