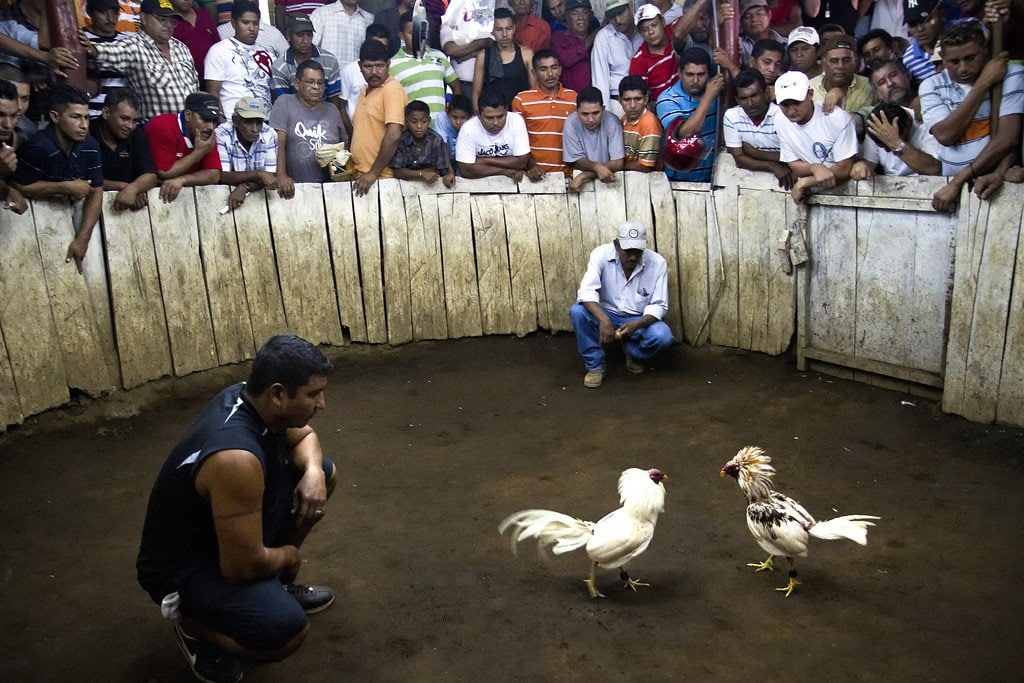 The sport of cockfighting is older than many religions and has been practiced around the world. I decided to find out for myself why it’s so popular in Nicaragua.

WARNING: This post contains graphic photos that may be disturbing.

Many countries have outlawed cockfighting, including the US. I wanted to experience the sport first-hand before I made any judgements about it.

My first cockfighting experience occurred in the small Nicaraguan town of Telica. It was a special event that the town celebrates twice a year.

Farmers from surrounding communities gather to test their prized fighting birds against each other. It’s the “SuperBowl” of cockfighting here, called Gallera in Spanish. 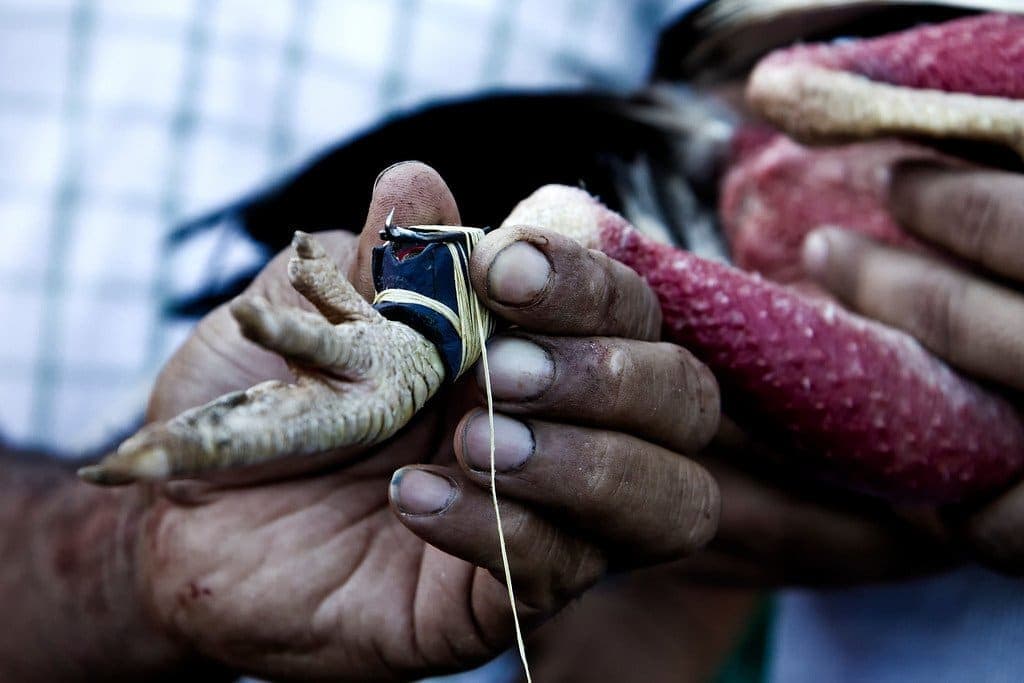 Rules for fights differ depending on the country. In Central America, there are four 15 minute rounds, with 15 minute breaks between each. A sharpened metal spur called a gaff is attached to one leg on each of the birds.

You may not realize that roosters actually grow their own spur here, but it gets removed when they’re young to prevent them from killing each other — something they do naturally.

This new artificial gaff is added to give the animal its weapon back, and help speed-up the killing process. In some countries like India, the bird’s natural spur is never cut off and is used in matches as-is. 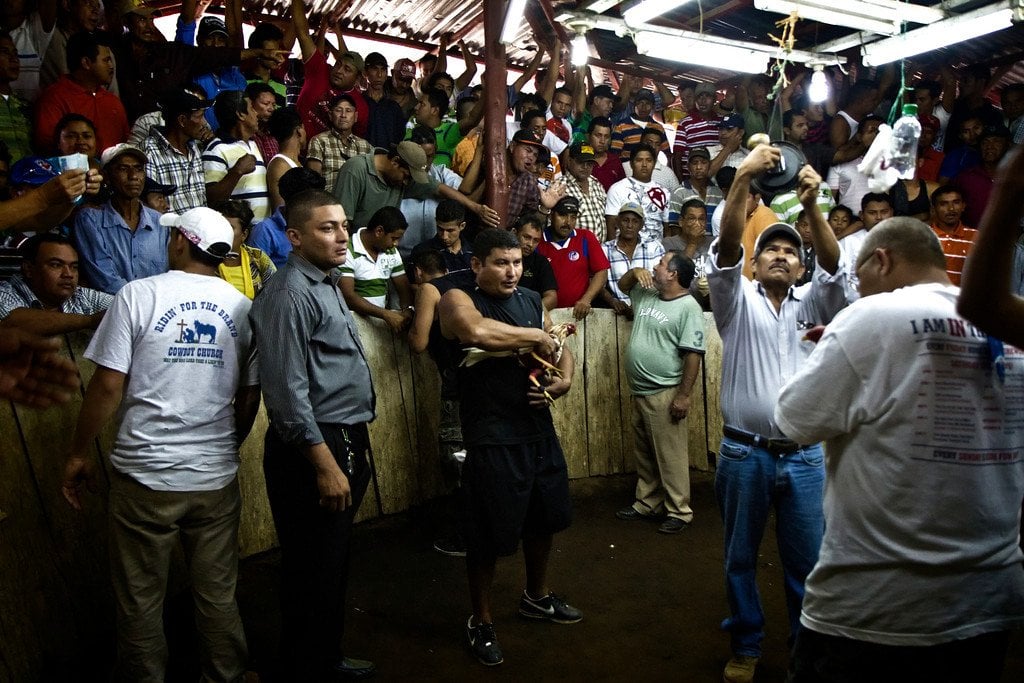 The day started like most cockfighting championships do, with drinking in the town’s central park in the middle of the afternoon. It was a festival atmosphere with ferris wheels and carnival rides for kids.

Plenty of food concessions and tents with bars for keeping adults happy too.

I met up with my new Nicaraguan friends Delver, Oscar, and Pedro to chug a few cervezas before we headed to the fighting arena. We passed a large parade that stopped to set-off incredibly loud fireworks in the middle of the street as a marching band played festive music.

After paying a small entry fee, we were led into the walled outdoor compound where 2 fighting rings were located. There was a main arena complete with wooden stadium seating, lights, and a metal roof.

The second fighting ring was a smaller. A typical farm setup made from pieces of cardboard & wood. 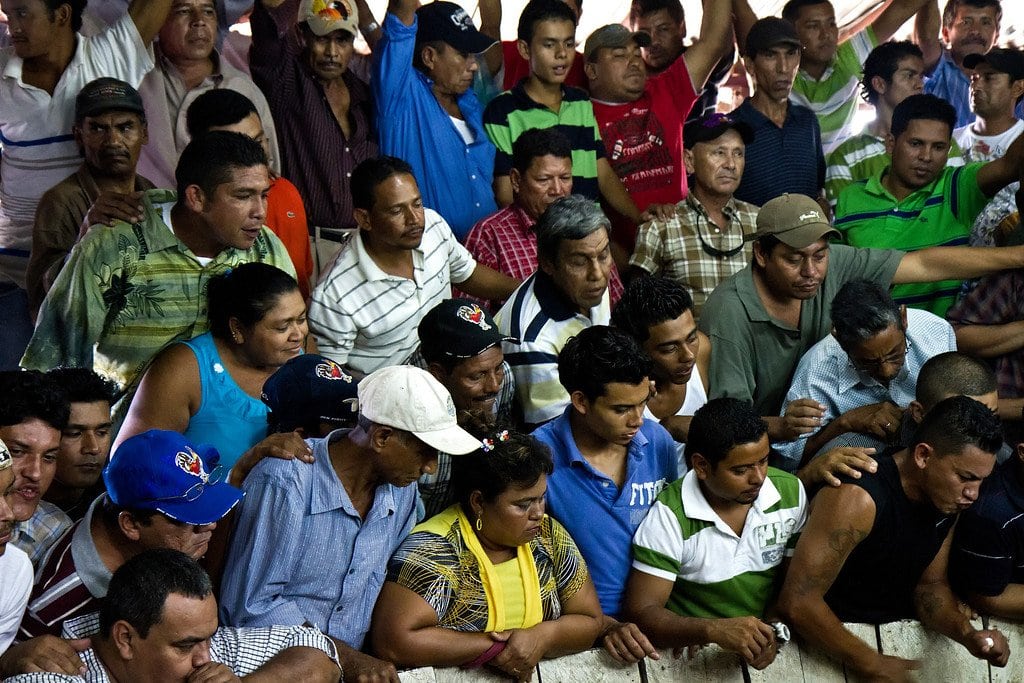 We headed straight for the main arena to get a good seat up front. It’s a good thing too, because 5 minutes later 200 people rushed inside as the first fight was about to begin.

Before the match both roosters are “warmed up” with a 3rd one.

The handler sticks it in the face of the other bird, just inches away to rile them up. Spectators start shouting and gesturing to place bets with each other on which animal will be the ultimate victor.

A bell rings and the two feathered fighters are set loose upon each other. Now the real action begins… 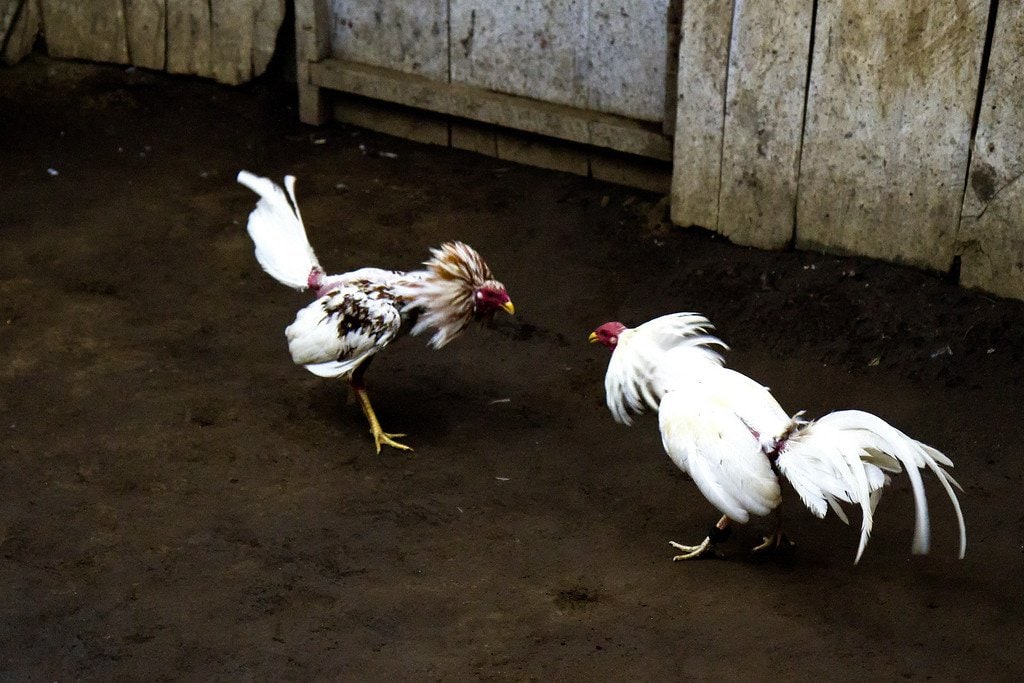 Which Bird Will Be the Champion?

The birds begin attacking by jumping, using their feet and beaks as weapons. Handlers yell instructions at their prize fighters and clap when they want them to attack.

When first blood was finally drawn the crowd went wild. The snow-white birds begin to get stained in red as the first injuries occur.

One rooster’s sharp beak stabs at his opponents eyes, while the metal spur attached to his leg occasionally finds its mark as he jumps & hovers mid-air with the help of his wings.

Bloody feathers float around as the combatants attack in a blur of motion.

After 15 minutes the first round was over. The handlers brought their fighters back to their corners, and began to prepare them for round two. 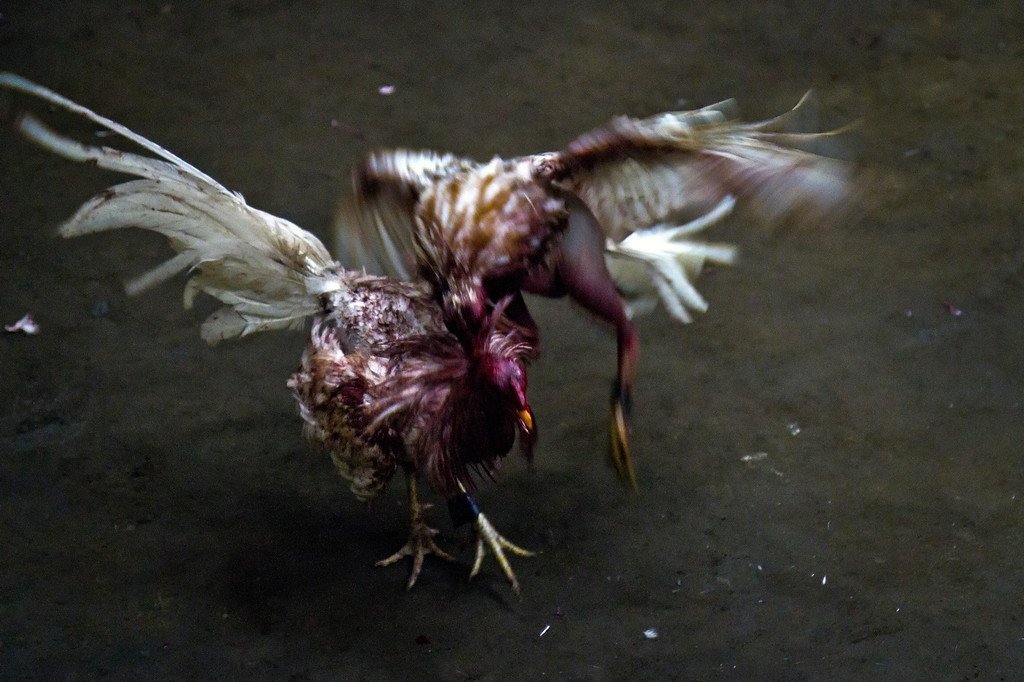 Blood is cleaned out of their eyes so they can see again. Wounds were wiped with a rag, and damage is inspected.

One guy attempted to give his bird mouth-to-beak resuscitation!

It was slowly dying and having a hard time breathing. Blowing into the rooster’s beak cleared it’s airway, giving it a chance to continue in the next round.

But the 15 minute break was soon over and fighting resumed. 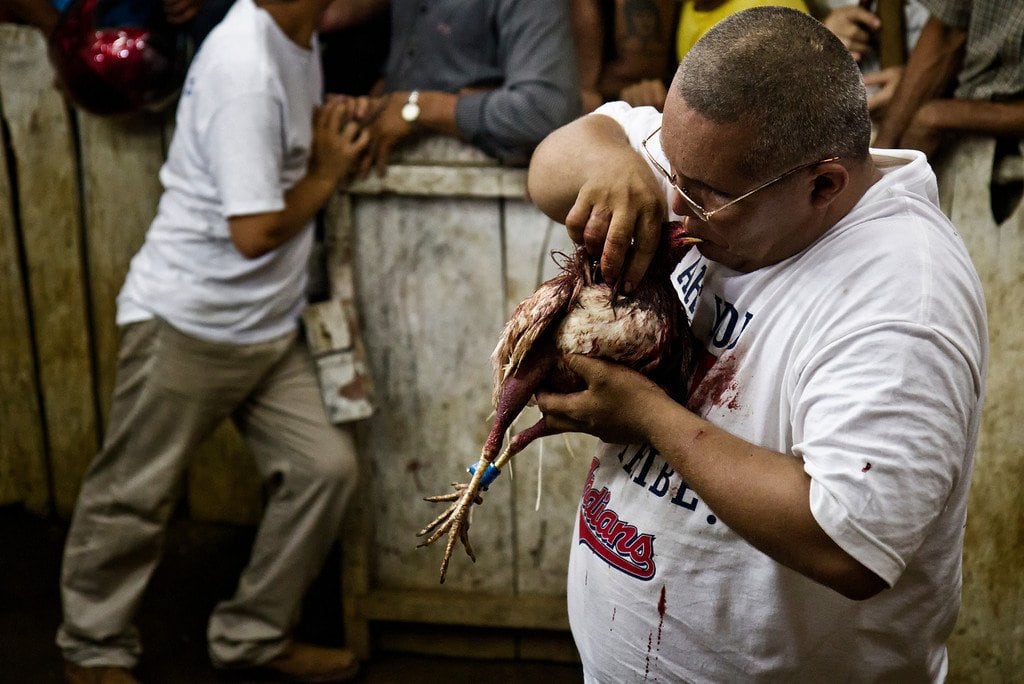 It quickly became clear who was going to win this match. After 25 minutes of frenzied fighting, one bird had just given up. It wasn’t jumping anymore, and eventually stopped standing upright.

His handler egged him on though, trying to put it back on its feet.

Unfortunately there was no hope for this guy. The champion kept attacking, landing repeated blows with the metal spur. Blood gushed from a gash on the opponent’s neck.

Fighting continued for another 5 minutes, just prolonging the inevitable.

Finally the ref stopped the match and announced a winner. Even with his bird clearly on the brink of death, the handler wasn’t very happy. He thought the match should continue.

He believed his practically paralyzed rooster still had a chance. But it was painfully clear to everyone else that it didn’t…

This cockfight was finished. 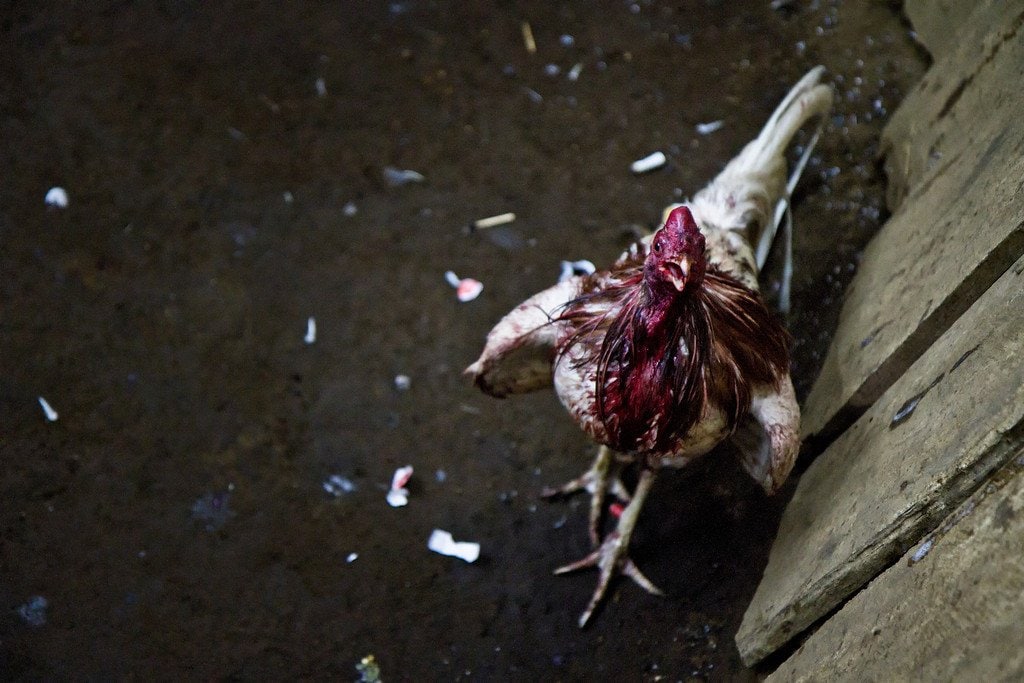 This Chicken is Cooked

Roosters attack each other in the wild all the time. In fact nature endowed them with weapons for this specific purpose. Only the strongest survive, creating a stronger species.

Sure, adding sharpened metal spikes is different. But artificial gaffs lead to quicker deaths then if the roosters were using natural spurs.

In a perfect, animal-loving world, the birds would be allowed to live long and healthy lives in thick fields of golden sunflowers. But that world doesn’t exist, and will never exist. Nature never intended for that world to exist.

Chickens are a source of food for Nicaraguans, not pets. If they didn’t let them fight, they’d just chop off their heads and eat them anyway.

I understand why many people think this practice is barbaric.

But do you realize how most chickens are raised in the United States? They endure FAR more torture and live horrible lives compared to these pampered Nicaraguan birds.

I wouldn’t call myself a fan of cockfighting, but also I don’t judge those who enjoy it. It’s not nearly as evil as some people make it out to be. ★

I hope you enjoyed this story about my Central American cockfighting experience! Here are a few more wanderlust-inducing articles that I recommend you read next:

What’s your opinion on cockfighting?