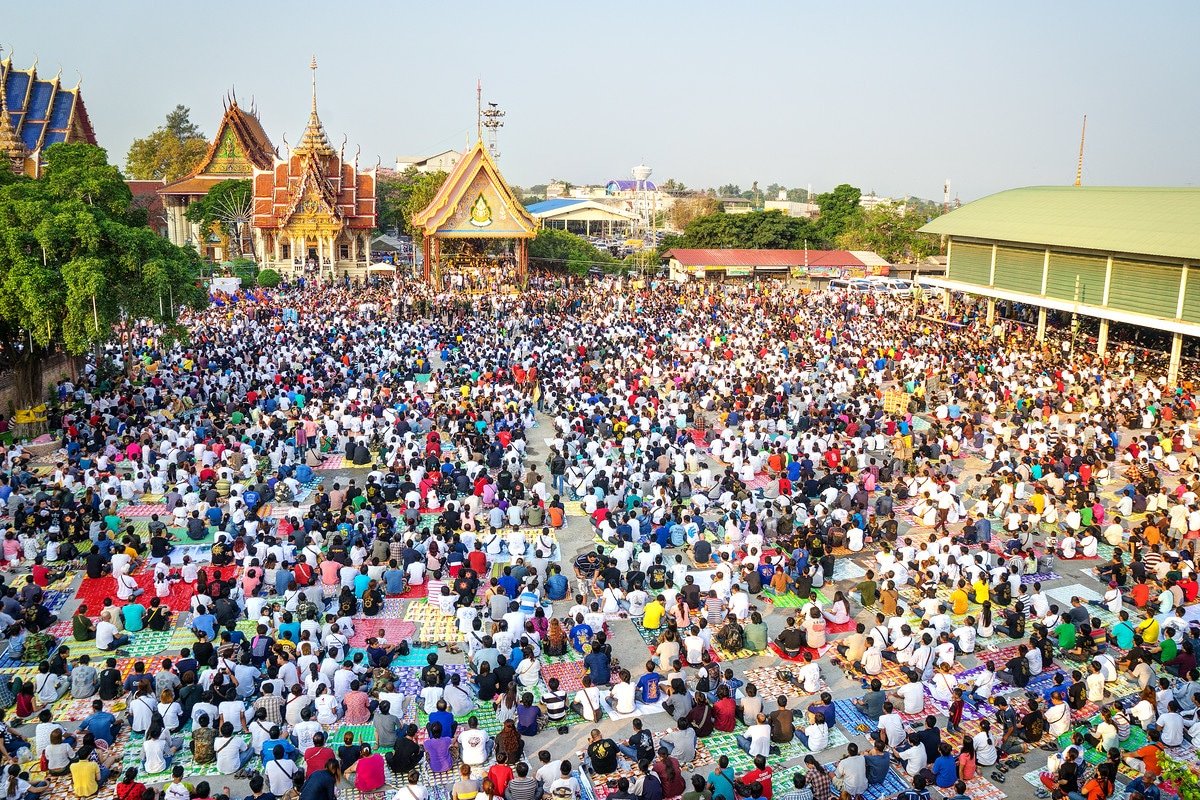 Hordes of screaming men possessed by their magic Sak Yant tattoos run wildly towards a shrine, crashing into the human shield of soldiers protecting it. Welcome to Thailand’s bizarre Wai Kru Festival.

ENJOY THESE PHOTOS? Click Here To Buy Prints »
Each year over 10,000 people gather at Wat Bang Phra, a large Buddhist temple about an hour outside Bangkok to recharge the magic of their sacred Sak Yant tattoos.

Sak Yants are traditional Thai tattoos etched into the skin by Buddhist monks for protection & luck, blessed with magic powers. Often applied by hand using a long metal or bamboo rod with a needle attached to the end, dipped in special ink made from ingredients like charcoal & snake venom.

However the supernatural power of these tattoos wears off over time, requiring them to be re-blessed and recharged. This is the purpose of the Wai Kru festival, paying respect to the teacher, and infusing new magic into thousands of Sak Yants at once.

The result can only be described as absolute mayhem. 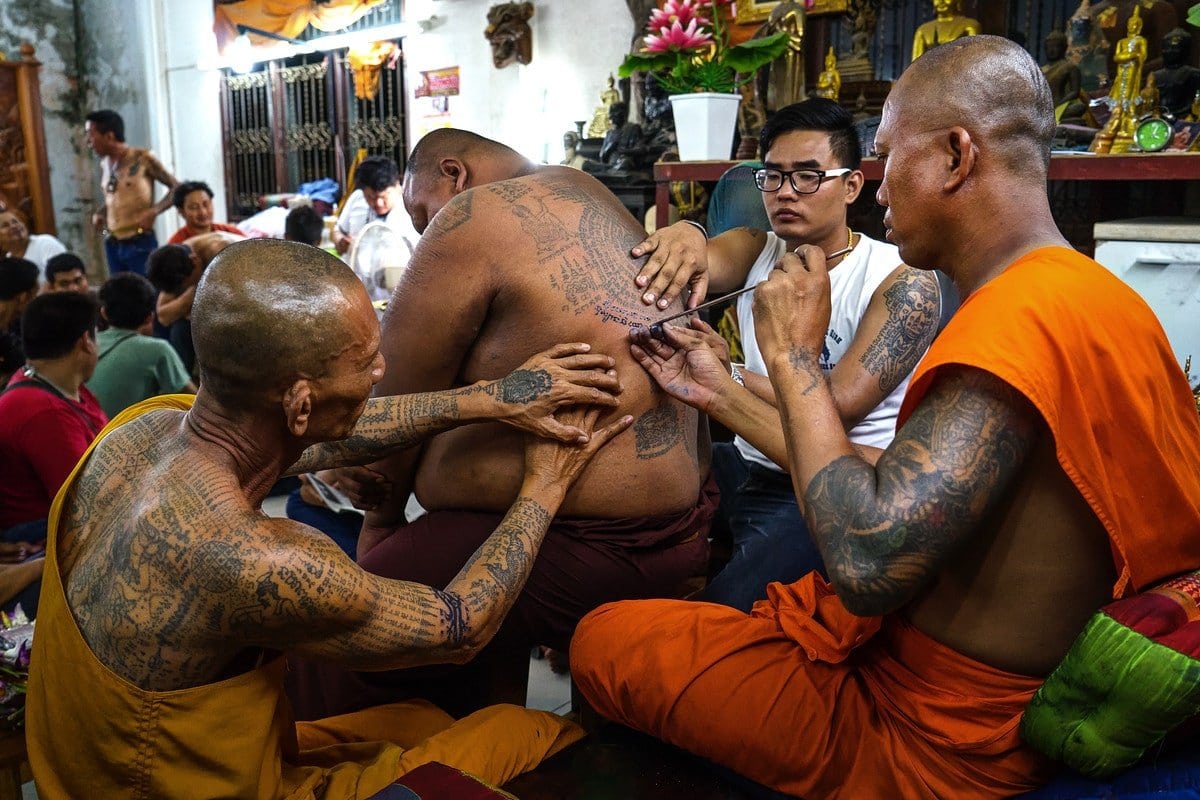 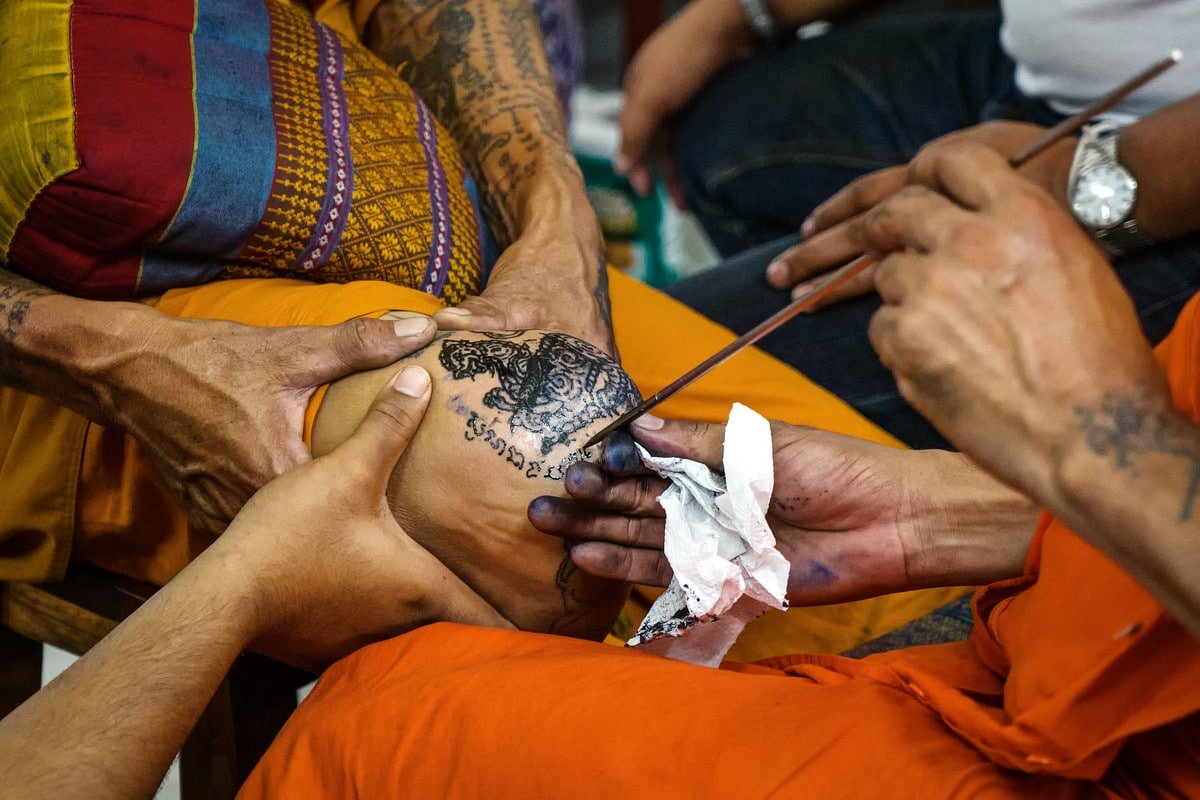 The evening before Wai Kru, a group of Ajarns (tattoo masters) and Buddhist monks gather at the temple to apply 1000 fresh tattoos on those who want them, working long into the night. I received my own Sak Yant a few years ago right here at Wat Bang Phra, so returning for this tattoo festival was special for me. After 2 years it was time to recharge the magic of mine.

The Sak Yant was originally used by warriors seeking protection and strength in battle. Often covering their entire bodies from head to toe in magic symbols to prevent knives and arrows from piecing their skin. These days Thai people from all walks of life get them — doctors, lawyers, taxi drivers, prostitutes, actors, and mafia criminals. 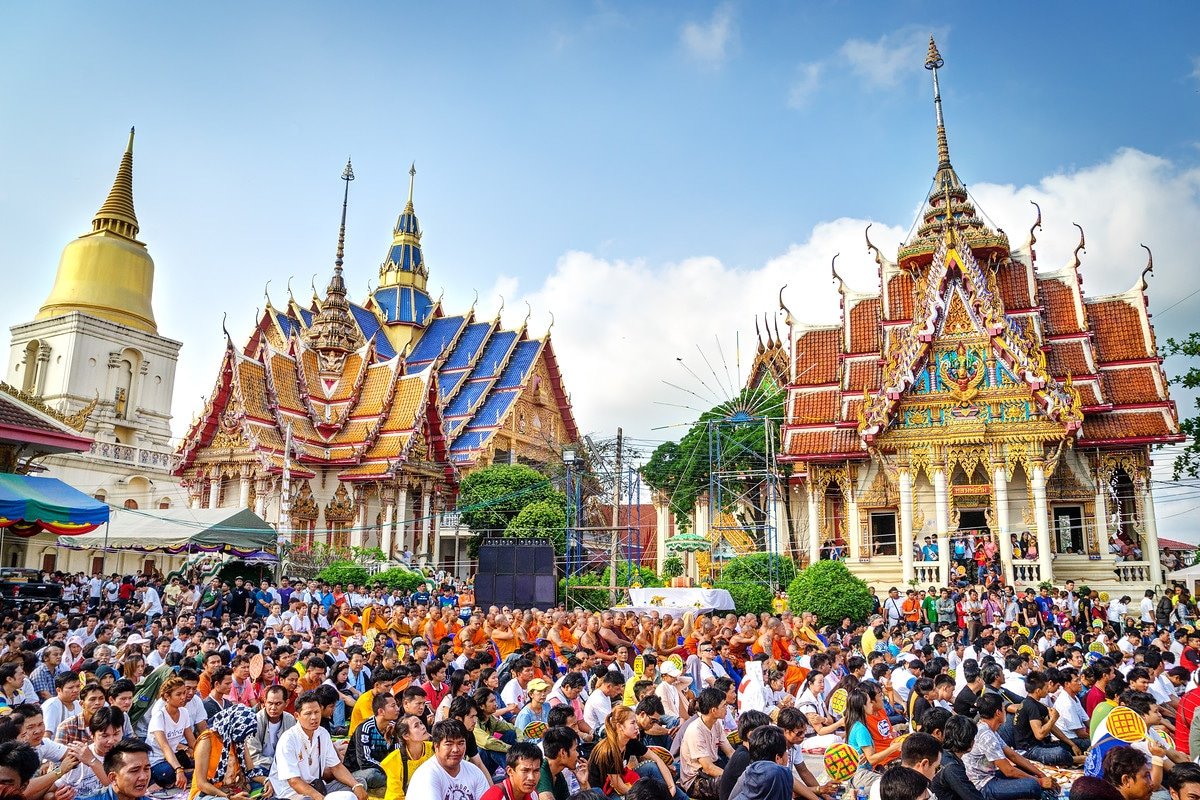 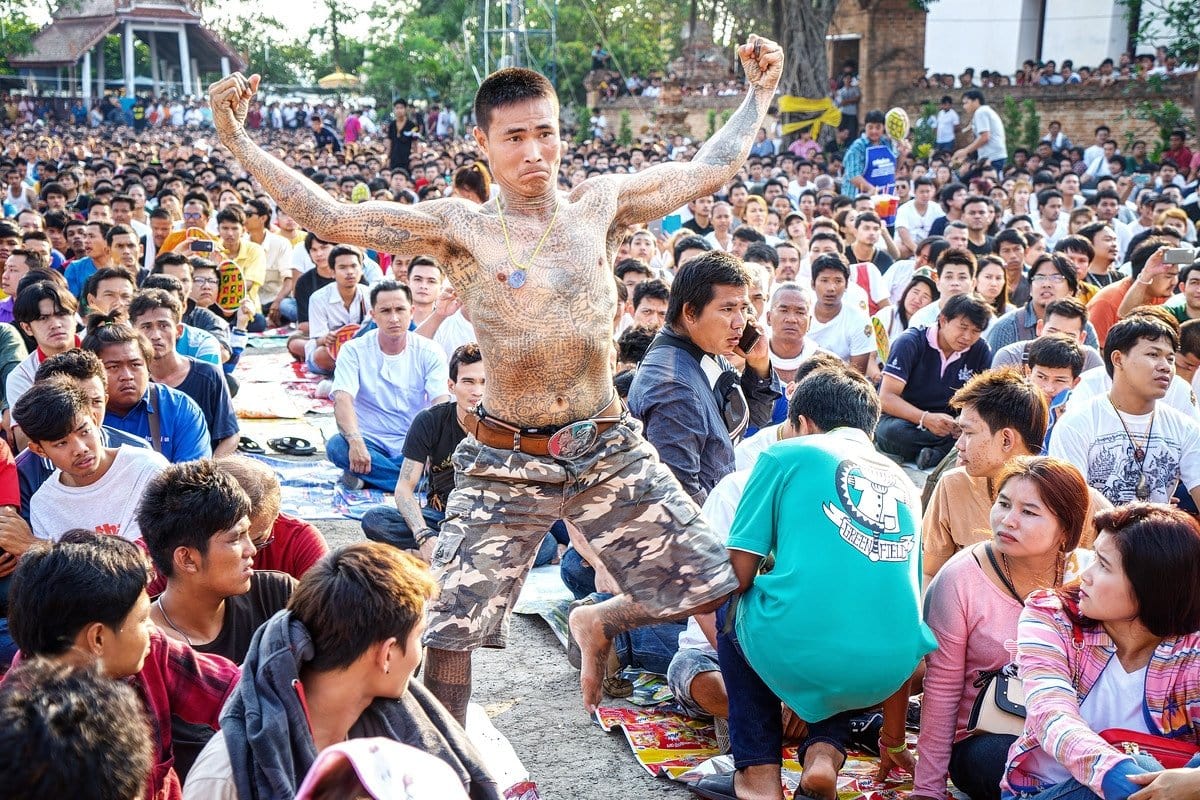 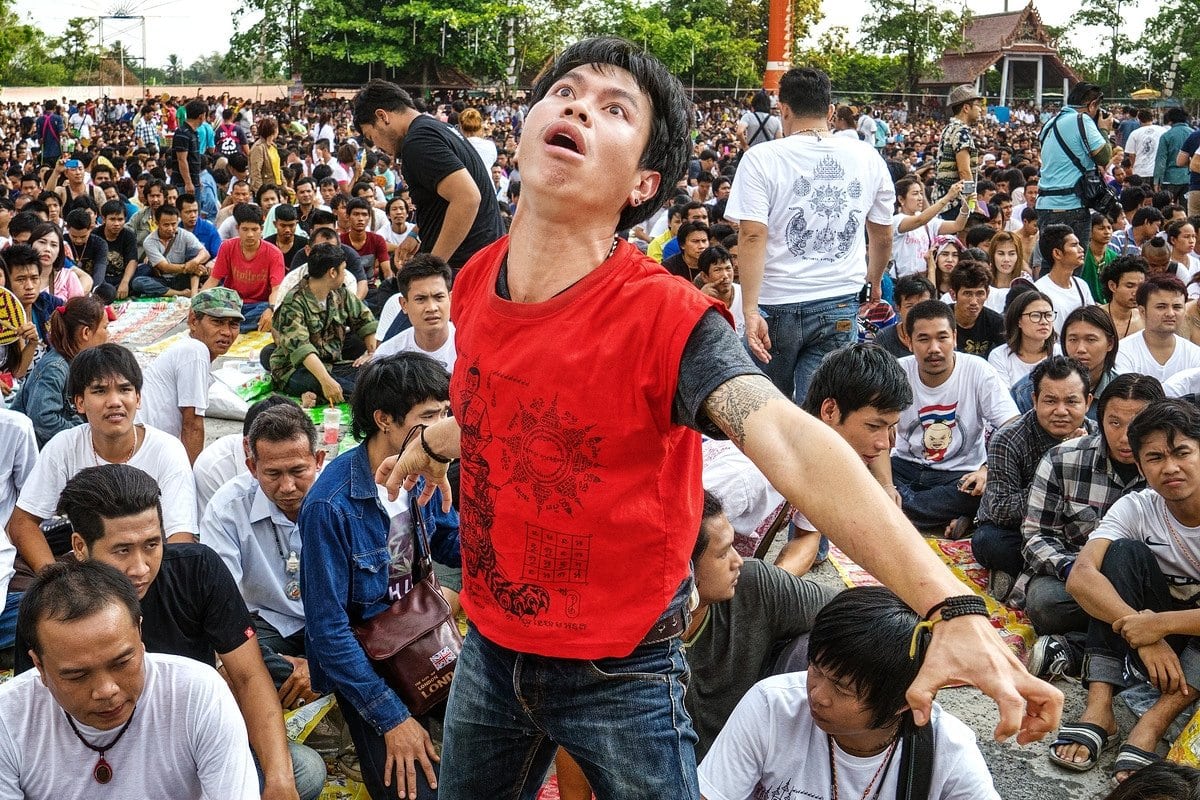 Thousands of devoted have gathered to renew the powers of their tattoos at the Wai Kru, and for some, the power overcomes them. Sitting cross-legged under the hot sun they enter a trance called Khong Khuen and become their tattoos — the Tiger, Crocodile, Old Man, or Hanuman the Hindu monkey god.

The Old Man slowly ambles up through the crowd hunched over with an invisible cane while laughing maniacally. Hanuman the monkey god leaps up screaming, sprinting full-speed towards a statue of their former master Luan Por Phern, tripping over others on the way. A wall of soldiers & paramedics stops them from reaching the shrine, pulling them out of the trance by rubbing their ears. 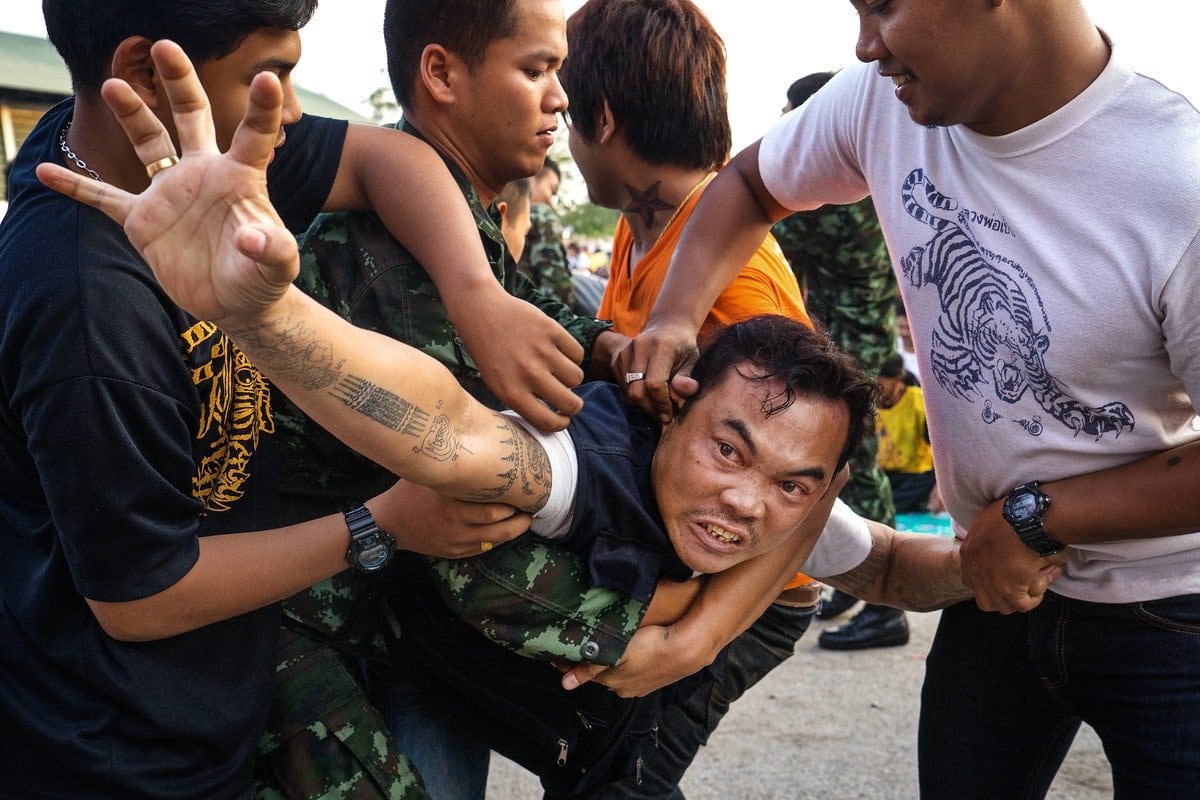 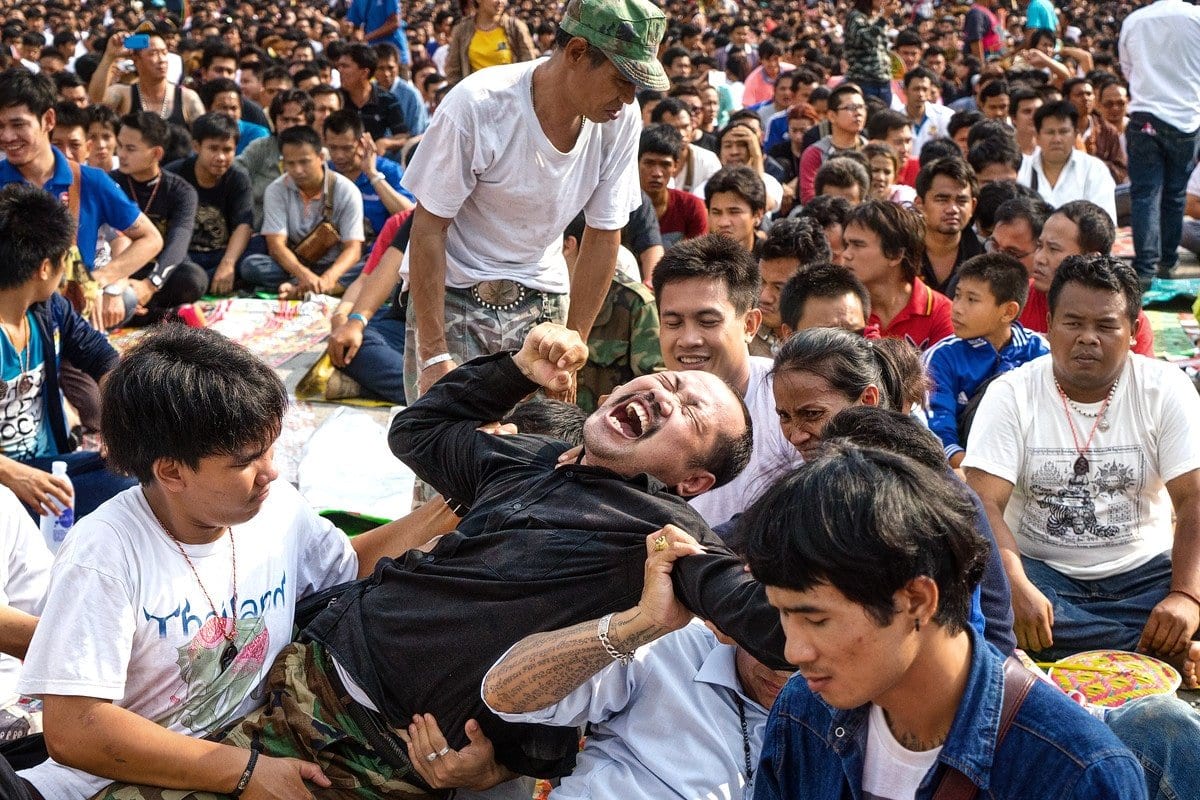 At first the trance only afflicts a handful of people, but as the morning progresses, the energy builds. Eventually hundreds of people are running for the shrine in total chaos, arms flailing wildly, crashing into onlookers with clouds of dust in the 90 degree heat. Monks then lead the crowd in prayer, recharging the magic powers of everyone’s Sak Yant tattoos.

I spot Master Luang Pi Nunn among them, the monk who tattooed a Gao Yord design on my back. Even during prayer, a few more possessed jump up and sprint for the shrine. However once the incantations have been recited, the ceremony ends and a crowd of 10,000 pushes up to the front while monks spray everyone with holy water. This was probably the scariest part of the whole morning, as you have no control of your own movement. It’s a suffocating sea of bodies, and you’re forced to flow with the tide. 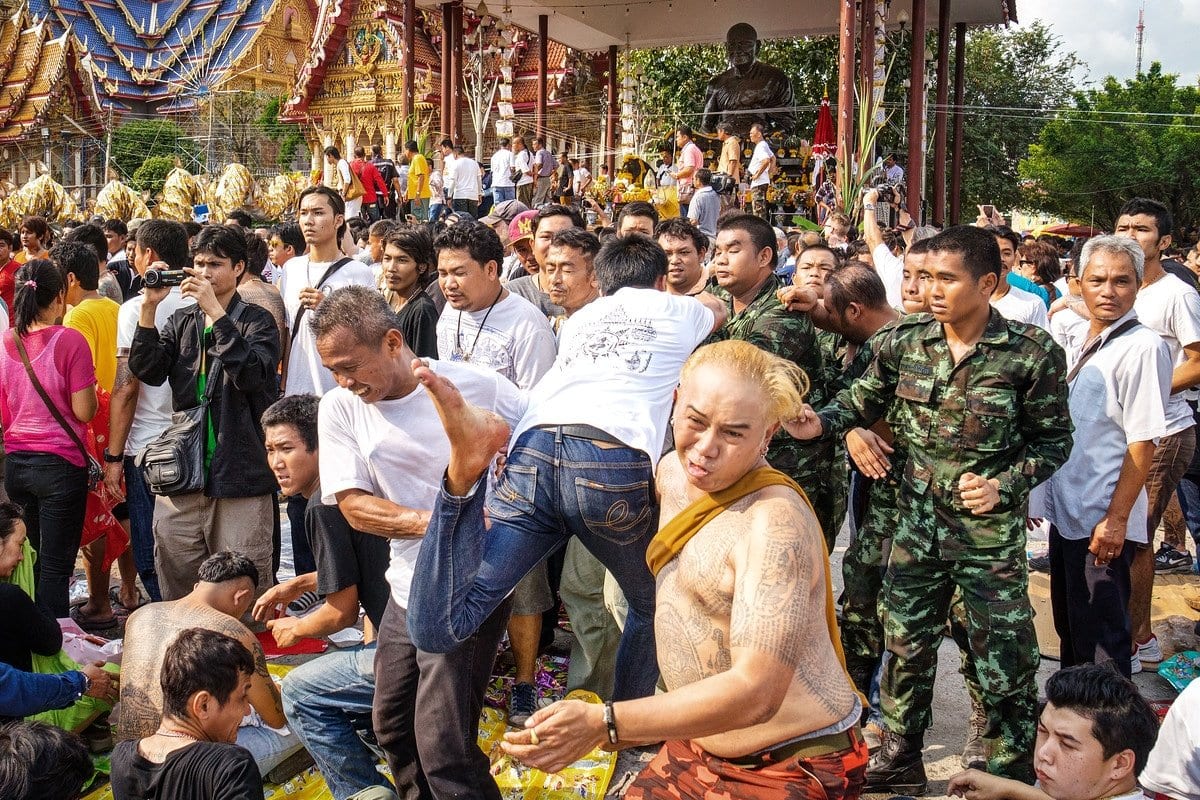 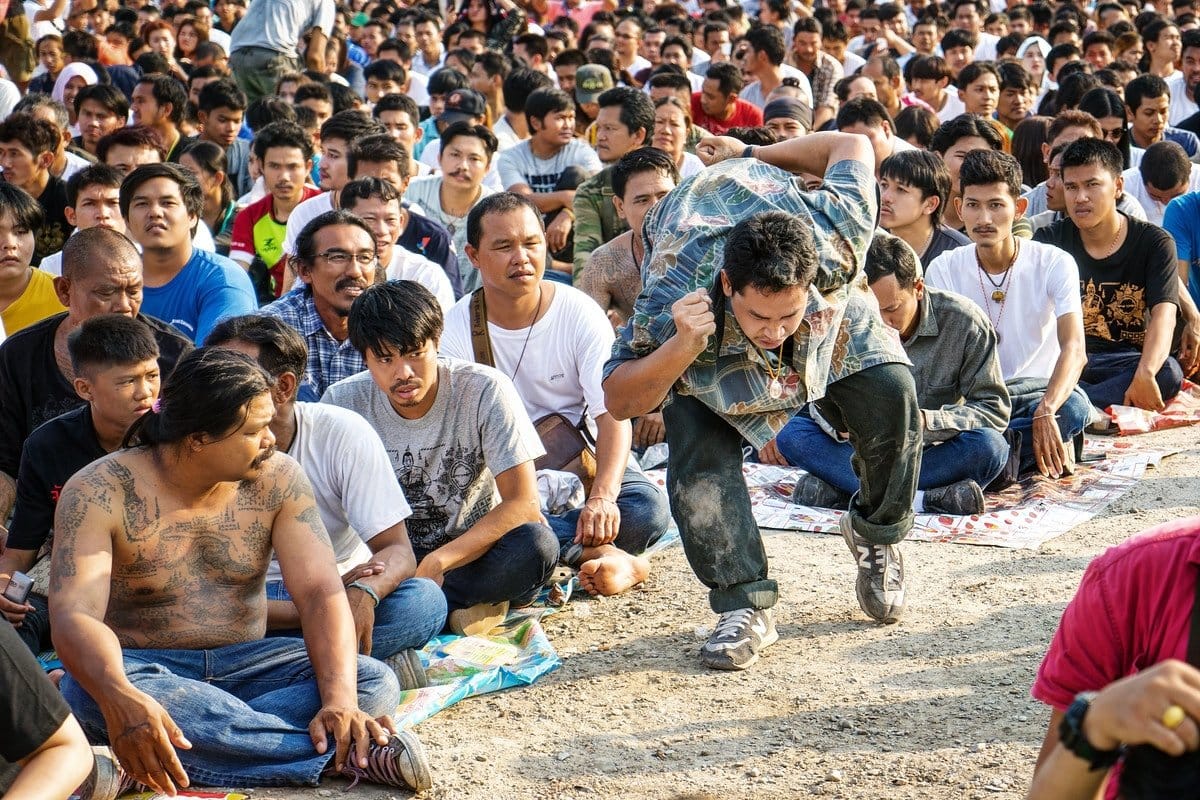 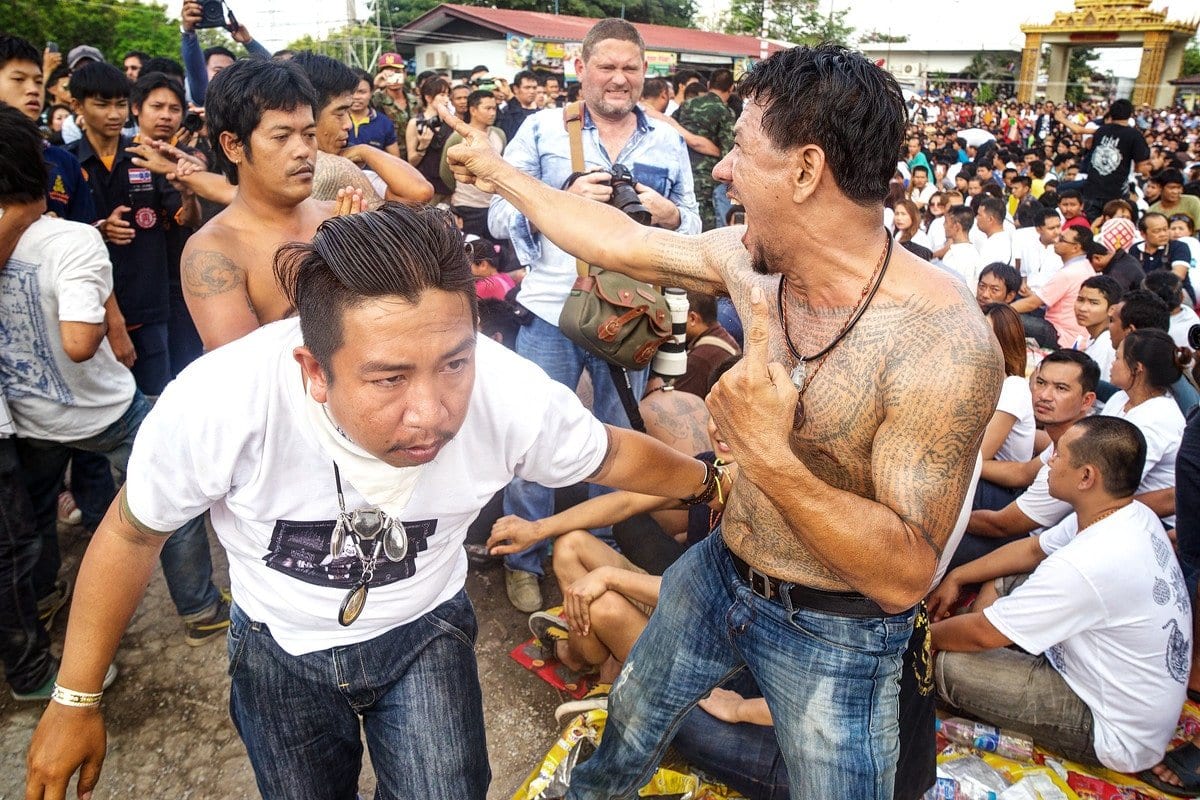 While I didn’t end up in a trance by participating in the ceremony, the adrenaline kick I received from standing in the middle of this mayhem was powerful. Attempting to dodge Monkeys, Tigers, and Crocodiles flying by in all directions certainly keeps you on your toes.

This sacred Wai Kru tattoo ceremony at Wat Bang Phra has recharged the magic of my own traditional ink, and I look forward to the renewed luck & protection that comes with it. ★ 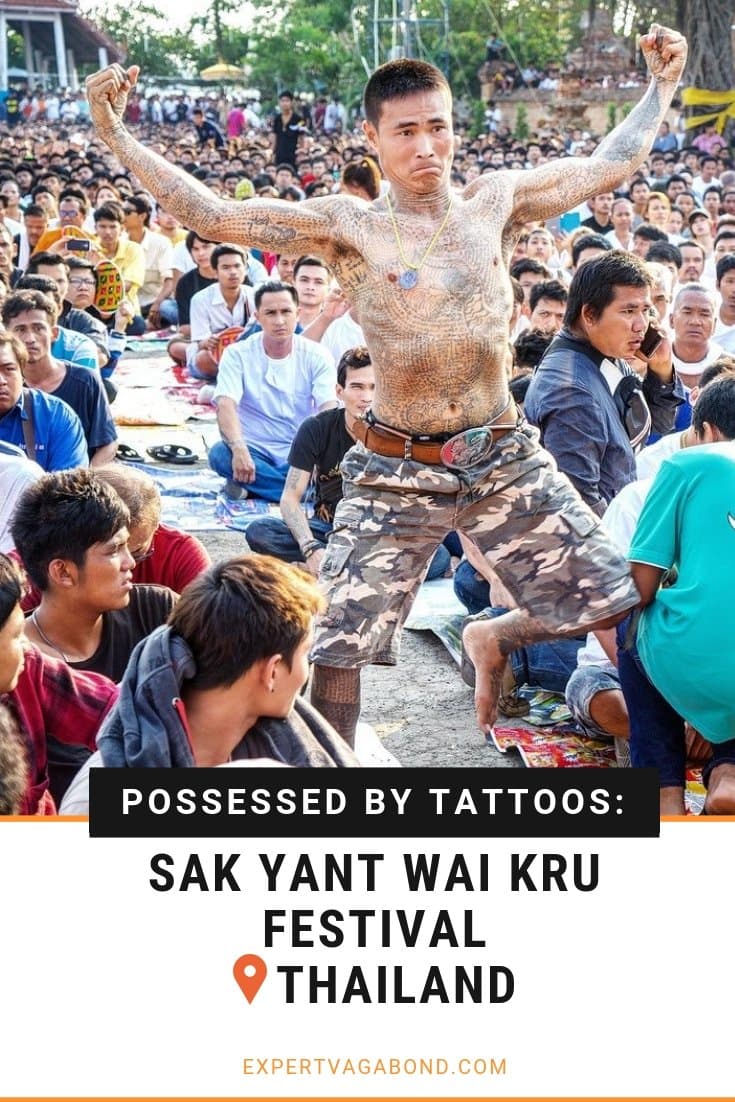 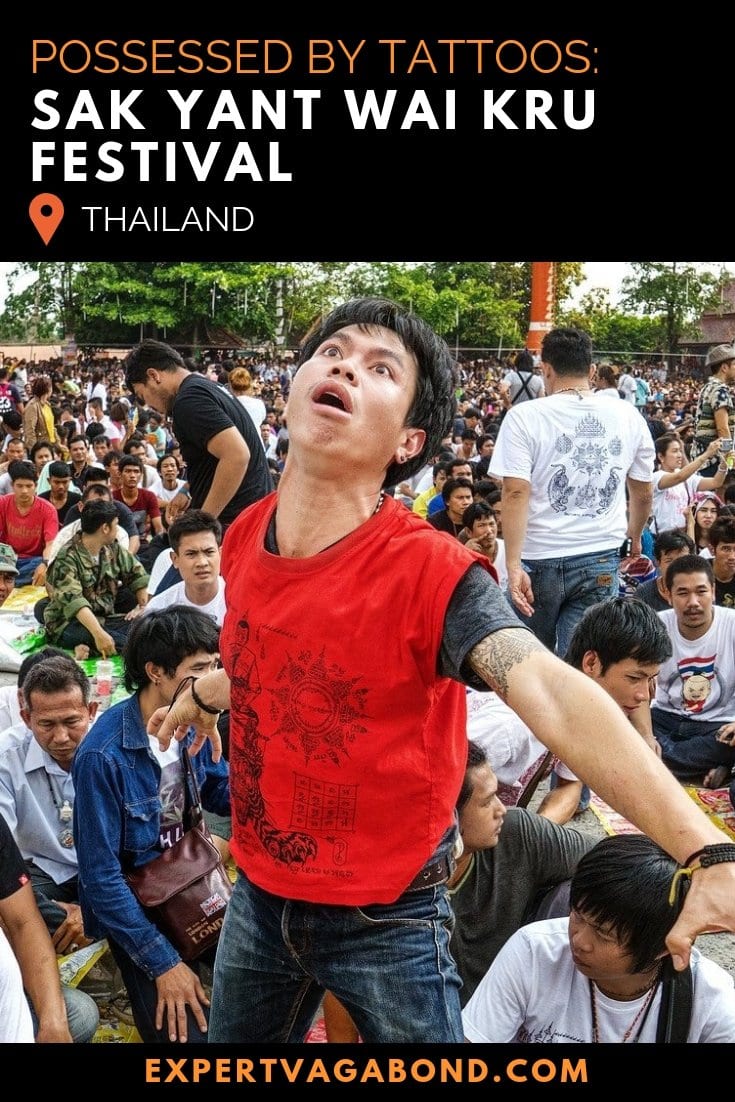 I hope you enjoyed my guide to the Sak Yant Wai Kru Festival! Hopefully you found it useful. Here are a few more wanderlust-inducing articles that I recommend you read next:

Have any tattoos? Would you consider a Sak Yant?