Stepping off a gloomy public bus into the midday sun, my eyes slowly adjust to an unfamiliar place. Dark armored glass shields you from everything, not just potential bullets.

Walking down a hot & dusty road past empty shops, empty apartments, empty sidewalks. There’s a palpable sense of history here. But I can feel tension too.

A man with an automatic rifle watches me approach.

Hebron City In The West Bank

For the next few days I was visiting the West Bank city of Hebron to learn more about the Israeli & Palestinian conflict from the people who live here. The city is a complicated & controversial place — as is the topic.

Let me begin by stating that I’m not an expert on this subject.

I’m not a professional journalist. I’m not a historian. I’m not Israeli or Palestinian.

All I can do is share my experience from an outsider’s perspective — simply what I heard and saw while visiting as a well-traveled tourist.

For me, traveling to Israel without witnessing what is happening in the West Bank was not an option. This is a key reason why I travel, to learn about the world through personal experience.

A Brief History Of The Conflict

Before I continue, some history as I understand it. The West Bank is the largest of the Palestinian Territories, located in the East of the country. The Gaza Strip is a much smaller territory in the South West of the country.

To the Palestinian people and the United Nations, the West Bank is part of the future/current State of Palestine. However, it’s been occupied by the State of Israel since the Six Day War of 1967.

To the Israeli government, the Palestinian Territories are part of Israel and the historic Jewish homeland.

In its simplest terms, this is the heart of the problem.

Hebron is considered ground-zero for the controversial Israeli settlement movement. A settlement is where Israelis move into Palestinian areas, often illegally, and start building homes or claiming old buildings for themselves.

Or outright kicking Palestinian’s out of their homes altogether so they can move in.

It’s a flashpoint for violence on both sides, and a unique situation in Hebron because Israeli settlements here are located in the HEART of a Palestinian city rather than out in the countryside.

After the 1993 Oslo Accords, Hebron was divided into 2 different sectors. The Palestinian controlled H1 Zone (80%), and the Israeli controlled H2 Zone (20%).

Both sides claim to be victims of an “apartheid” type system, with neither able to move freely through the whole city.

While I spent 3 days exploring the city of Hebron, the first day was with a fascinating project called the Dual Narrative Tour.

This innovative tour is split between a Palestinian guide and an Israeli guide, each showing us their respective parts of the city. Meeting with locals and hearing stories from both sides. It was an excellent introduction to the area.

We learned what actually goes on here from the people who live in Hebron.

The Palestinian Side (H1)

A man with an automatic rifle smiles as we walk by. He’s a member of the Israeli Defense Forces (IDF) tasked with guarding the entrance of Al Shuhada Street (aka King David Street).

The area is also called “Ghost Town”. A kind of no-man’s land between the two sections of the city.

This street was closed in 1994 when an Israeli settler went on a shooting spree killing 29 Palestinian Muslims at the Cave of the Patriarchs mosque. Rioting and more deaths followed, prompting the IDF to create a buffer zone between the two sides.

Palestinians who lived & worked on Al Shuhada Street were forced to relocate, with no time to collect their belongings. Buildings lining the street were sealed shut by the military, leaving them empty and abandoned.

Walking down this empty road, we meet our Palestinian guide Mohammed who takes us through a 2nd military checkpoint marking the entrance to H1 — the Palestinian zone.

Passing through the checkpoint into H1, our initial stop is Hebron’s bustling market. Made up of simple stalls selling vegetables, dresses, underwear, shoes, and other basic goods.

A wire mesh hangs over the street above our heads.

The purpose of this curious barrier is to stop Israeli settlers who live in the buildings above from throwing garbage down onto Palestinians as they shop. But it feels like a cage.

When tensions are high, dirty dishwater and even bleach have been poured onto Palestinians here. It’s a disturbing occurrence, especially when you take into account that years ago Arabs & Jews lived together in Hebron as peaceful neighbors.

Mohammed takes us to meet Abed and Hadia, who’s family of 8 lives in an 800-year-old building that’s now attached to a settlement. Jewish settlers have been intimidating & attacking them for years.

Hadia explains over tea that she is actually Abed’s 2nd wife, his first was tragically shot to death by an Israeli settler outside their home. While pregnant.

Hadia’s own son was blinded by a bleach attack in Hebron’s market.

Outside her home we run into a group of TIPH international observers with a United States Embassy delegation.

They are guarded by armed men in black vests, black sunglasses, and radio earpieces — likely members of a private security contracting company.

Next, we visit Sa’heed and his family who also live beside Israeli settlements.

He shows us where IDF soldiers raided and ransacked their home in the middle of the night, how Israeli settlers regularly climb onto their roof to cut holes into their water tanks.

We are all at a loss for words, unable to imagine living like this.

The Israeli Side (H2)

Filled with sadness & anger, we leave Mohammed and walk through the metal revolving door of another IDF military checkpoint to meet with our Jewish guide Eliyahu in the Israeli controlled H2 zone.

It’s time to hear the other side of the story in Hebron.

Eliyahu takes us to the Israeli settlement of Avraham Avinu, one of 5 settlements located around the city of Hebron surrounded by guard towers, razor wire, and concrete barriers.

Built in 1540, the Abraham Avinu Synagogue was destroyed during the 1929 Hebron Massacre, when 67 Jews were murdered by a mob of Arabs who were reacting to the false rumor by their leader that Jews were attacking Muslims in Jerusalem.

It was the British, who controlled Palestine at the time, that forced remaining Jews to leave Hebron for good.

Settlers eventually returned to re-establish themselves in the old Jewish quarter of Hebron after Israel took control of the West Bank in 1967, and the synagogue was rebuilt.

Eliyahu opens a display case showing us a 500-year-old Torah scroll that managed to survive the synagogue’s destruction and Jewish massacre.

Rabbi Simcha is an Israeli settler who moved to Hebron from New York. We sit down in his home to discuss the situation in Hebron, to get another perspective.

He explains that to settlers, Hebron is the cradle of Jewish civilization. Home to the tombs of their most important religious figures: Abraham, Isaac and Jacob.

Can you imagine if Christians weren’t allowed in Jerusalem?

If Muslims weren’t allowed in Mecca?

This is why Jews want access to Hebron, why Jewish settlers like him move here from all over the world despite the risks.

When asked about Israeli settler violence, Mr. Simcha says that in their community, they “don’t believe in turning the other cheek”. It may not be a nice thing to do, but it’s normal to respond when you’re attacked.

In his view, Arab attacks in Hebron are more frequent and serious. Like when a Palestinian sniper murdered a Jewish baby in 2001, when Rabbi Shapira was killed in 2002, or the many suicide bombings that have happened.

Jewish settlers have a policy of building in the location where acts of violence against them happen, to remember & honor the dead. We saw memorial plaques on new buildings throughout the Jewish quarter of Hebron dedicated to people who were killed by Palestinian terrorists.

I was beginning to understand that the violence, however horrible, is by no means one-sided.

Tomb Of The Patriarchs

The most famous religious site in Hebron, the Cave of the Patriarchs (also known as the Sanctuary of Abraham) is incredibly sacred to both Jews & Muslims. It’s where Abraham (Ibrāhīm) is buried.

Abraham is considered both the father of Judaism (the first Jew) and a pioneer of Islam (a Muslim prophet). He’s important in Christianity too.

The building has been split in half to accommodate both faiths.

In fact, it’s the only structure in the world that is both a mosque and a synagogue. The tomb itself can be looked onto from small barred windows on each side, with a bullet-proof shield between them.

We’re forced to go through a series of strict security checks before entering.

There are still attacks in Hebron, perpetrated by both sides, often by teenagers & young adults.

Just down the road is where some Israeli teens were tragically kidnapped & killed by members of Hamas, igniting the start of the 2014 Gaza War that only ended a few weeks before I arrived.

The violence in Hebron comes and goes in waves.

Stone-throwing. Military raids. Acts of vandalism. Thefts. Rioting. Many Palestinian suicide bombers are from Hebron; but Hebron is also the home of the Kach Party, a Jewish terrorist organization.

While sensational headlines keep most tourists away, tourists themselves are generally not a target for this violence.

Unfortunately, most of us get our information from the often biased & incomplete evening news. Including me. I had my own preconceived notions about what was happening in the West Bank, as I’m sure most of you do.

Visiting the divided city of Hebron gave me new insight and empathy for those involved on both sides of the conflict.

The situation is definitely not as black & white as it may appear from the outside. Yes, living here can be difficult, but life goes on anyway.

The conflict in Israel can be summed up with a popular phrase here — “it’s complicated”. So very complicated.

A majority of actual Israeli and Palestinian people desperately want the violence to stop. It seems to be the extremist groups on BOTH sides, and governments with too much power, who unfortunately prevent this from happening.

Walking back through Hebron’s military checkpoints on Al Shuhada Street, I reflect on the sad stories I’ve heard. But there were plenty of smiles & new friends too.

I look forward to a day when both sides can find a peaceful solution. ★

I know this is a controversial topic, but please keep your comments civil. Disagreement is fine, but rude/profane remarks will not be tolerated. 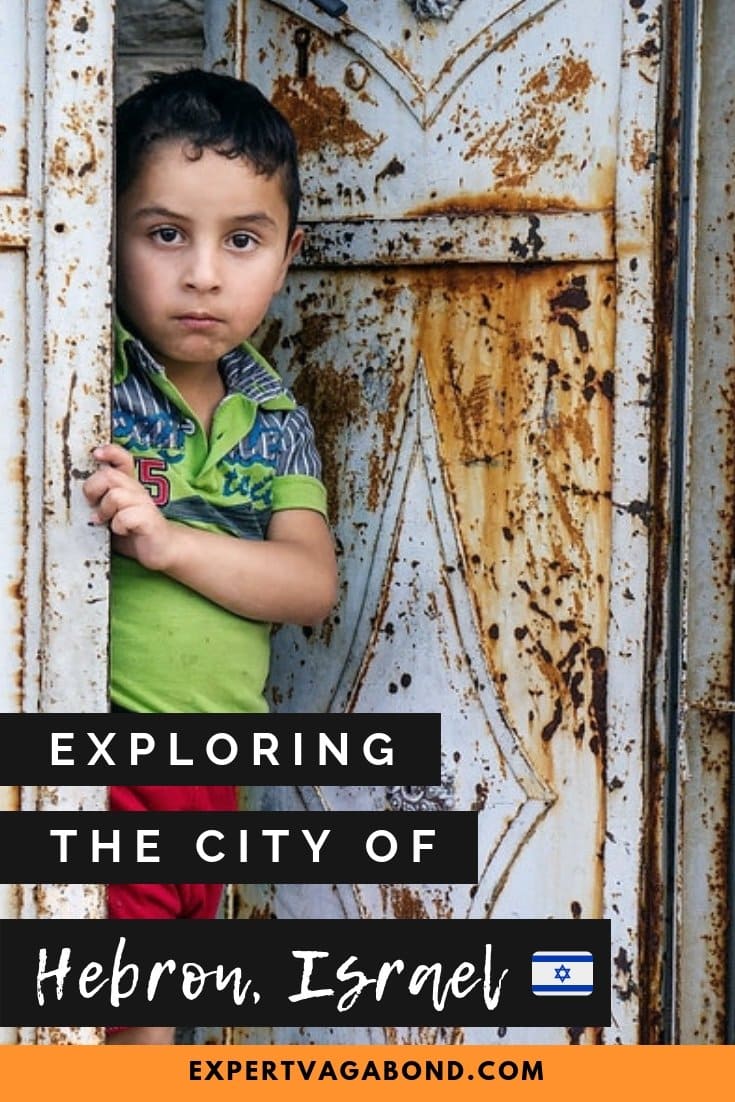 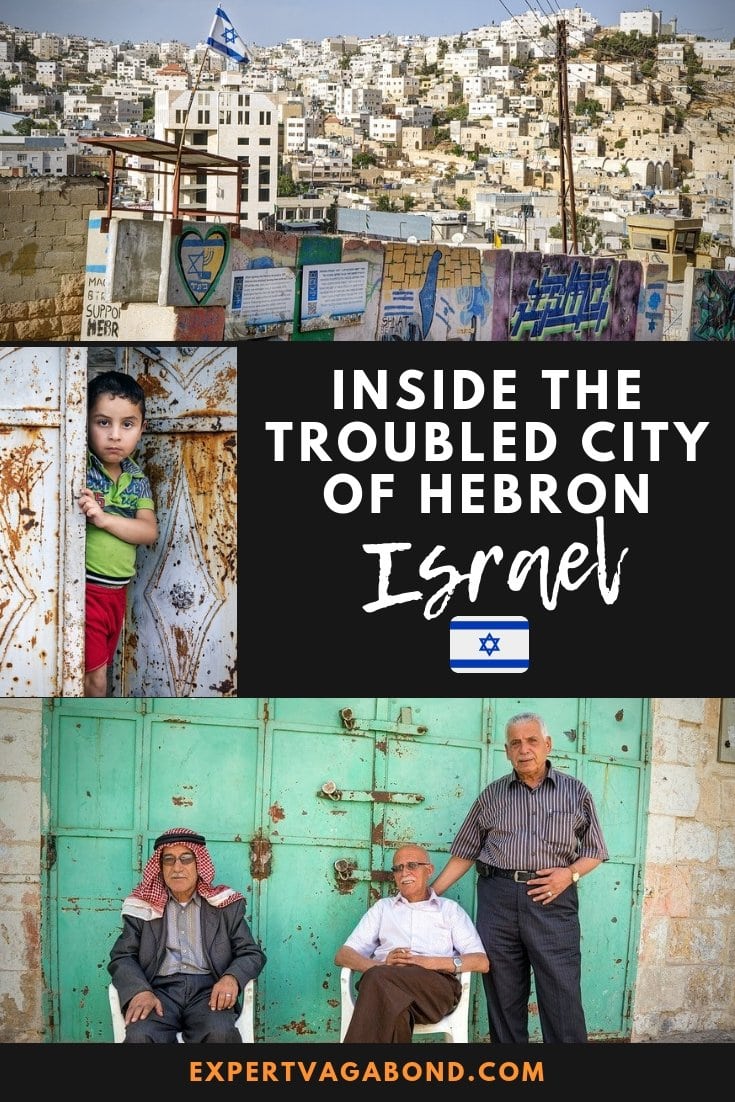 I hope you enjoyed my guide on the city of Hebron! Hopefully you found it useful. Here are a few more wanderlust-inducing articles that I recommend you read next:

Would you ever visit the West Bank in Israel? What’s your opinion on the conflict? Let me know in the comments below!