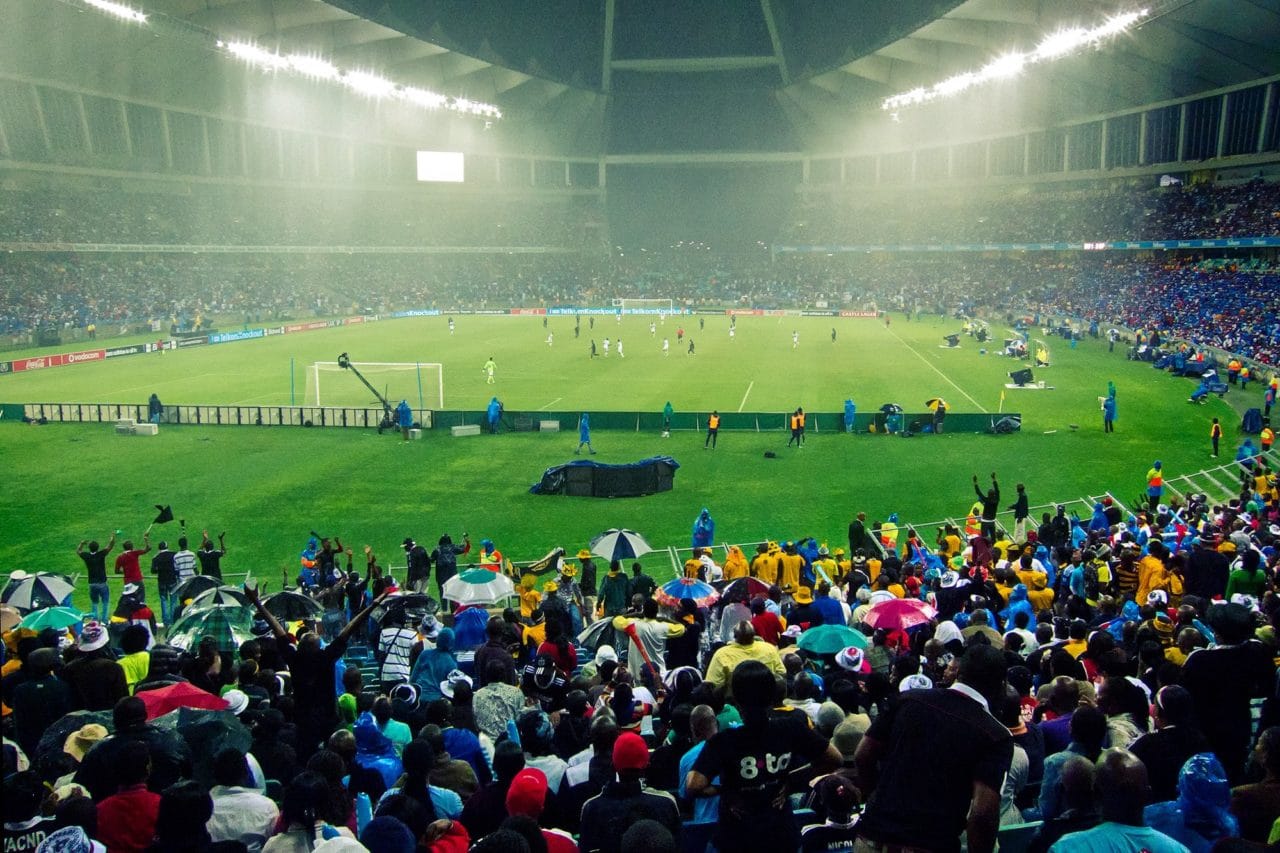 We knew we were getting closer to the action as we approached hundreds of men & women armed with Vuvuzelas. These powerful South African weapons have a reputation for chaos & mayhem.

Non-stop dancing in the seats…

Rumor had it that football matches in South Africa can be a little crazy. This isn’t the “touchdown” kind of football I’m used to in the United States, but the “gooooooaaaallllll!” kind.

Soccer is one of the oldest and most popular sports in the world. It’s known history dates back as far as the 3rd Century BC, when a version of it was practiced by Chinese soldiers.

I played a lot of soccer when I was a kid like I’m sure many others did, but sadly I’d never actually been to a professional match before. All that was about to change tonight though. 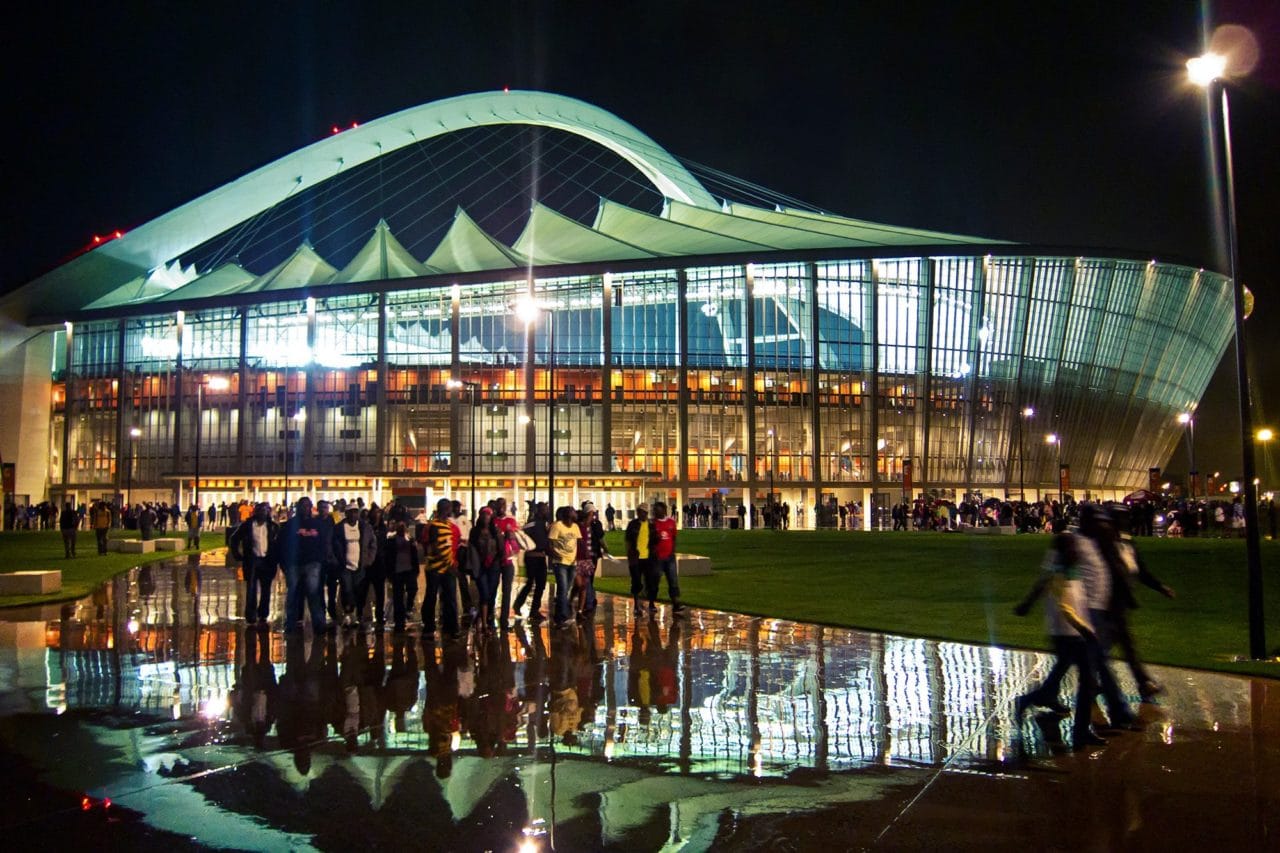 The Orlando Pirates were facing off against the BidVest Wits with over 50,000 witnesses in attendance at Moses Mabhida Stadium in Durban, South Africa. It was a Telkom Knockout Final, and emotions were running high.

Rain began pouring down on our walk from the parking lot towards Durban’s new, brightly-lit architectural masterpiece recently completed in 2009 for the FIFA World Cup.

Feeling outnumbered in the crowd, I too armed myself with a Vuvuzela from a street vendor, and prepared for battle. The incredibly loud plastic horns are a well-known hallmark of South Africa’s football matches.

Originally made from the antlers of Kudu antelope, these cheaper versions are still capable of putting out 120+ decibels of sound. They are actually so loud that they were almost banned during the World Cup!

Soccer Party in the Rain

Entering the stadium with our $5 tickets, we slowly made our way through the mass of fans to our designated section where it was possible to sit in any free seats available. Joining a large & rowdy group close to the edge of the field, the party commenced.

Our section was not protected from the elements, but we had a great view and stayed where we were. The rain came down harder. No worries though. It seemed to make everyone in the crowd dance and yell with a little more enthusiasm.

The match was tied up 1-1, and anytime the striker got close to goal box, the vuvuzelas would blast out in anticipation of a possible point.

At halftime, I pushed my way through a wall of bodies with my new Zulu friend Tommy to warm up with some cold alcohol. We carefully passed large plastic cups full of Castle Lager (a local favorite) to each other above the heads of people in line.

Walking back down to the seats, I was surprised to find that the party had actually intensified at halftime when the teams weren’t even playing! Non-stop dancing in the seats with plastic-horn led tunes & cheers. 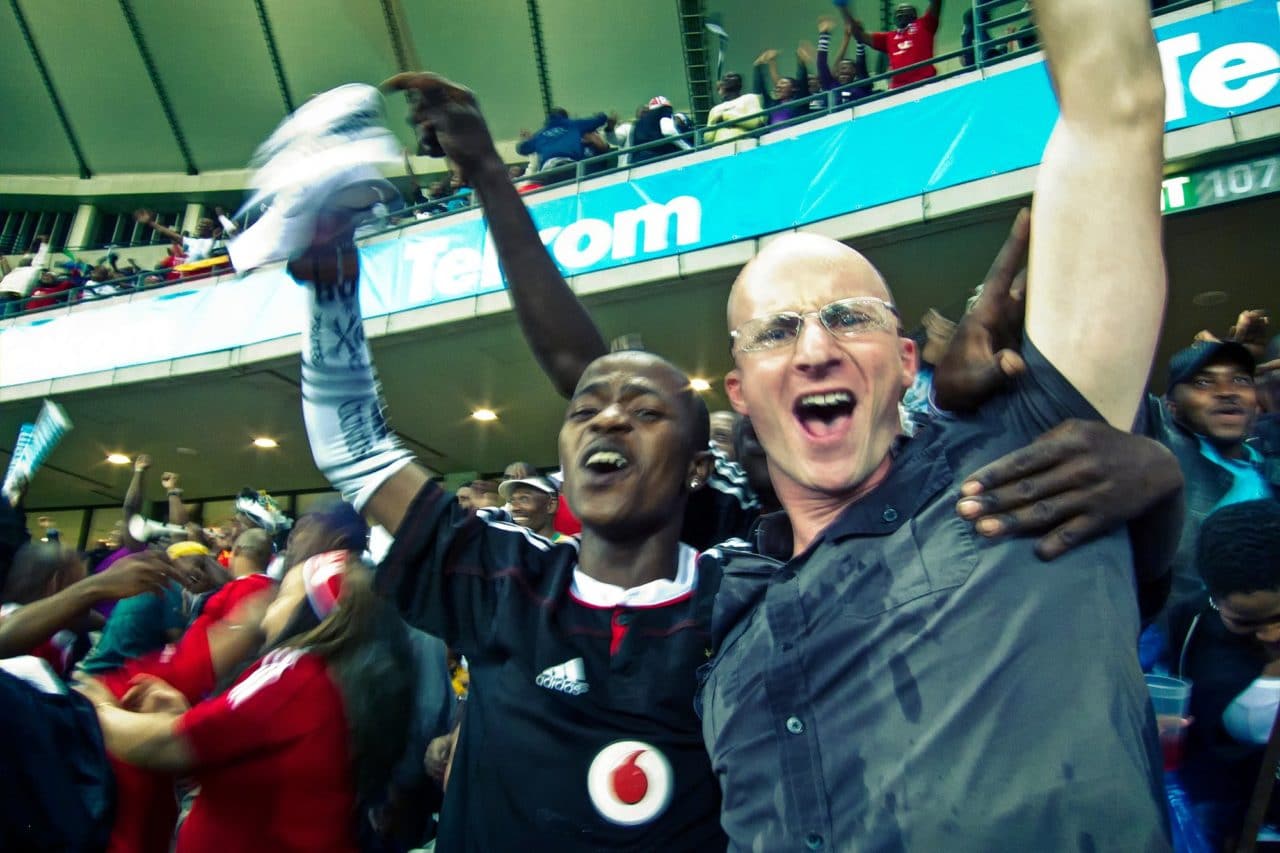 The Pirates Win It!

In the last half, the Orlando Pirates (crowd favorites) eventually broke the stalemate with 2 more goals for a final score of 3-1. Around this time the steady rain turned into an outright downpour, further energizing the 50,000 fans.

Celebrations continued as we all funneled out of the stadium and into the streets.

South African football fans are hardcore too. Thousands of them had traveled to Durban from the capital city of Johannesburg packed into cars or by train for the 3 hour trip just to watch this match, not even knowing where they would sleep that night.

Many will pass out in parks or on the beach and return to “Joburg” the next morning.

I’ve never been an obsessive sports fan. I love watching games, but I don’t really follow stats, players, or even teams. Watching soccer has rarely been high on my list of priorities. But after experiencing this wild South African football match in person, I’ve got a new love for the sport.

While I certainly won’t be glued to Sports Center anytime soon, I will be paying much closer attention to any games that happen to be showing on a bar TV.

The rowdy enthusiasm of soccer fans around the world is addictive. You’ll definitely find me attending more live games in future travels, armed with a vuvuzela if I can help it. So if you happen to be sitting next to me – cover your ears.

I hope you enjoyed my guide on South African Football! Hopefully you found it useful. Here are a few more wanderlust-inducing articles that I recommend you read next:

*This journey was made possible with help from South African Tourism. However, as you probably know by now, all opinions & thoughts are my own.