A unique team of researchers is freediving with dolphins & whales to study their complex communication system in new ways never seen before. We joined them on the water.

Fabrice Schnoller is a man on a mission. He’s attempting to gather amazing new data for dolphin and whale research. But he’s not a scientist, he’s an engineer.

His team has built an underwater 3-D camera with high-end microphones to capture complex communication between these incredible marine mammals from all directions. They’re able to distinguish which animal is creating which sound using sophisticated software.

By sending freedivers into the ocean without noisy scuba gear or remote submarines, they can record intimate moments with detail not possible before. With help from researchers from the University of Paris, the team hopes to prove these intelligent creatures are actually talking to each other in their own language.

In time, maybe even decode a bit of what they’re saying!

Based on Reunion Island, Fabrice took us out looking for whales and dolphins in the Indian Ocean.

Our adventure started on board the beautiful Hnoss, an 80 year old Norwegian whaling boat restored to its former glory — now used for watching whales rather than harpooning them.

The sails were dropped and we took to the sea keeping an eye out for pods of dolphins or humpback whales that might be arriving, as whale season was starting. If conditions were just right, we might even be able to jump in the water with them!

After a few hours of searching and laying around on the deck in the sun, we finally spied a pod of dolphins swimming around a few boats in the distance. We changed course to take a look.

Dolphins Off The Port Bow

It was a family of spinner dolphins, maybe about 20 of them. They happened to love the large profile of our wooden sailing ship more than others, and swam right up as we approached.

I was in the perfect position, hanging low from a net in front of the bow.

One group split off and swam back and forth right below me, where I managed to get a great photo. Because there were other boats around us though, we couldn’t get into the water with them.

Swimming with dolphins or whales in the open ocean isn’t easy. There are rules. You can’t chase them down and expect them to stick around. They must approach you, and be curious (and comfortable) enough to let you hang out.

While I was excited to see the dolphins up close, I really wanted to swim with them. Or even better, swim with a whale. But these things take time and lots of patience.

Typical trips can last 3 or 4 days, the time it takes for a particular group of animals to get used to the boat and not swim away. Remember, not too long ago we were hunting whales. Some people still are. They’re wary of humans.

After changing my travel plans, I had extra time on the island, and asked Fabrice if I could join him to try again. He agreed to take me out on the research boat with his team.

His “team” turned out to be 4 beautiful French mermaids, three of them freediving experts. That alone made my day.

We motored out deep into choppy seas looking for the spout or splash of a whale. Fabrice whipped out an underwater microphone to listen for the tell-tale clicks or singing that can be heard from miles away.

Not only are whales the largest animals on Earth, they’re also the loudest.

We didn’t hear any whale sounds, but it didn’t take long before we eventually spied a gigantic tail rise out of the water and make a splash in the distance.

Now comes the tricky part. Attempting to show this magnificent creature that we mean it no harm.

Unfortunately this particular whale didn’t want to hang out. We just got close enough for it to see us, hoping it was curious enough to swim over on its own.

It was early in the season though, and whales are still shy around boats.

After flashing a few glimpses of tail, our whale took a deep breath and dove into the depths for an underwater nap. The waves began picking up and clouds were moving in, so we decided to head back towards calmer waters and freedive for fun before calling it a day.

Until next time, my underwater friends. ★

Fabrice and his team are trying to crowd-fund a new research expedition and documentary movie like nothing you’ve ever seen before. Imagine a 3D virtual reality experience, turning your head to watch sperm whales communicate and interact with you from all directions, in the comfort of your home.

There are only a few days left, and they have some great incentives to donate. Like a copy of the completed movie, or even a chance to join them on the expedition!

Learn more about this project or donate yourself on the Indie GoGo Page. 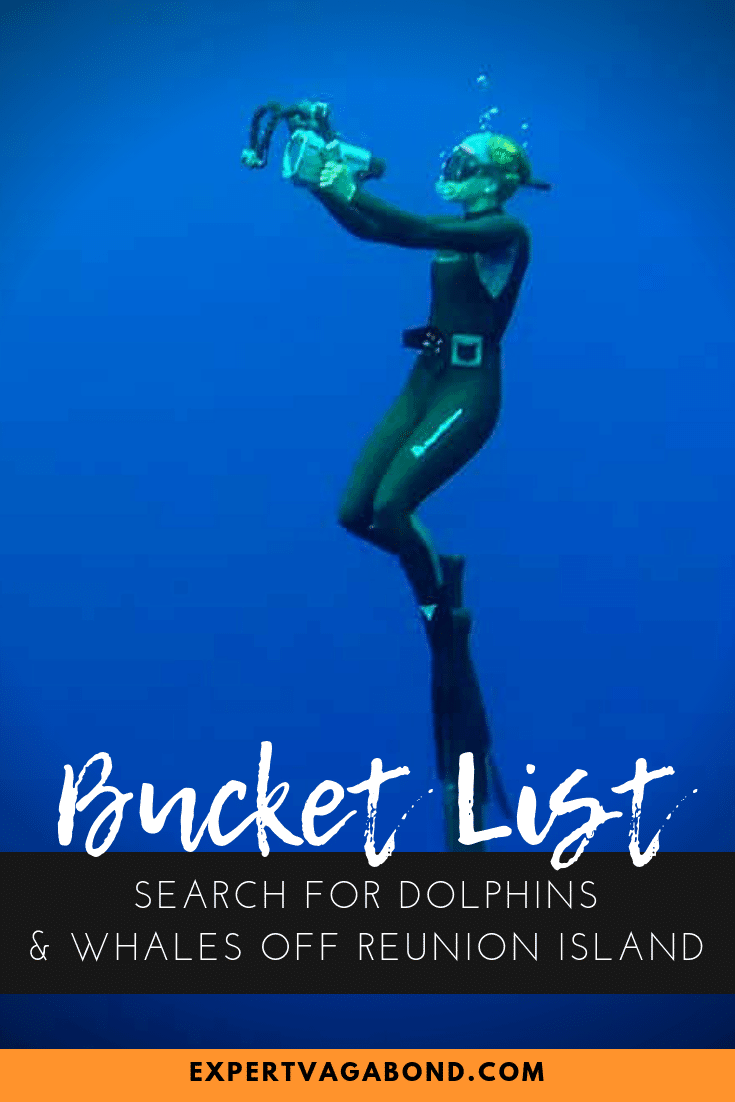 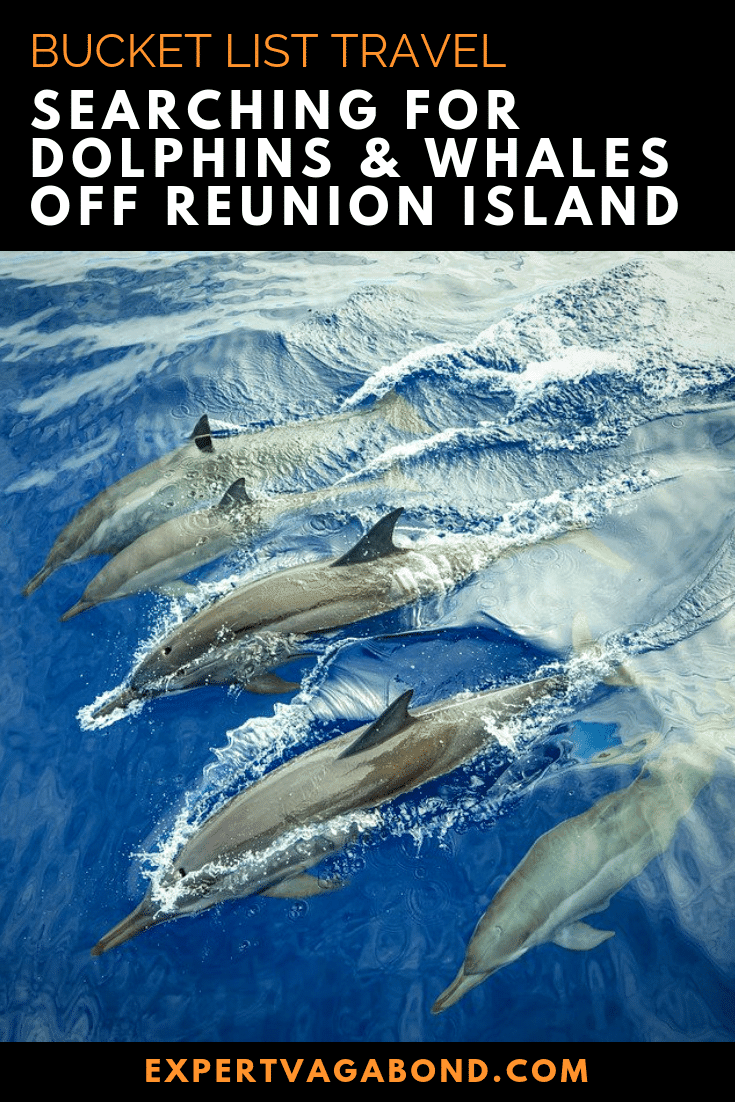 I hope you enjoyed my guide to searching for Dolphins & Whales off Reunion Island! Hopefully you found it useful. Here are a few more wanderlust-inducing articles that I recommend you read next:

Do you have a favorite animal encounter from your travels? Drop me a message in the comments below!

#GoToReunion is made possible in partnership with iAmbassador and Reunion Island Tourism. As always, the content & opinions expressed here are entirely my own.