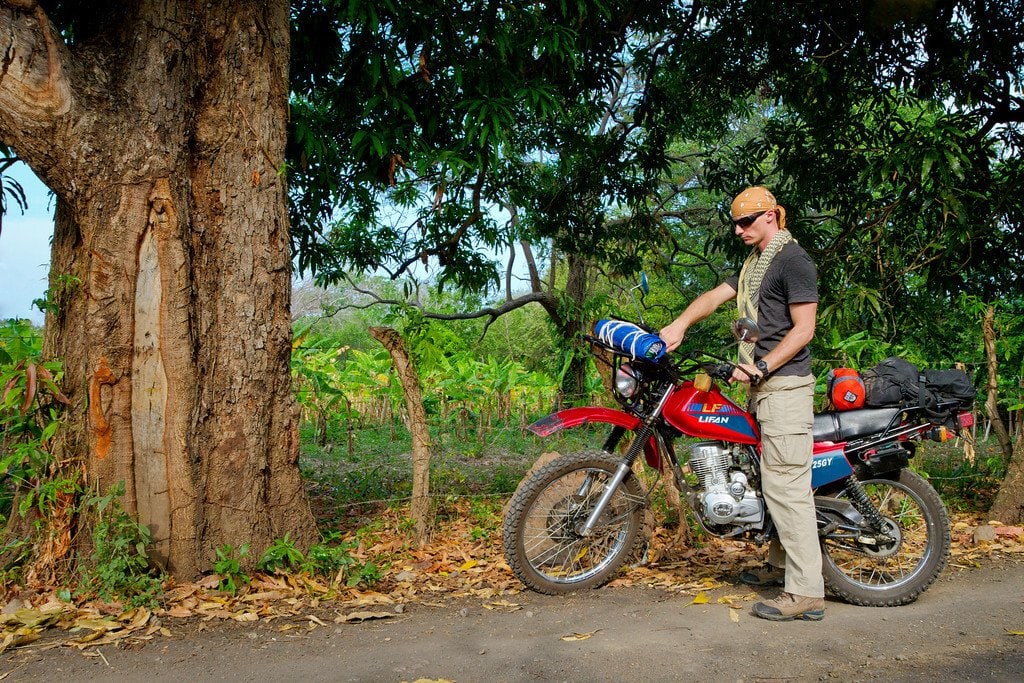 Is This How I Turn You On?

In only 24 hours I managed to get pulled over by cops, crash my motorcycle, spend a night on the beach, and catch over 20 fish in 10 minutes.

Touring around the small villages of Isla de Ometepe with a rented dirtbike turned out to be quite a little adventure.

It all started when I boarded a ferry at San Jorge and headed across Lake Nicaragua to Isla de Ometepe. The island is formed by two different volcanoes, Concepcion & Maderas. It’s the largest volcanic island surrounded by fresh water in the world.

Within the giant cosmopolitan city of Moyogalpa (pop. 2900), I found just the girl I was looking for. She was fast, cheap, and loved to get dirty.

A small 150cc powered off-road hog who I named Bertha.

It was love at first sight! 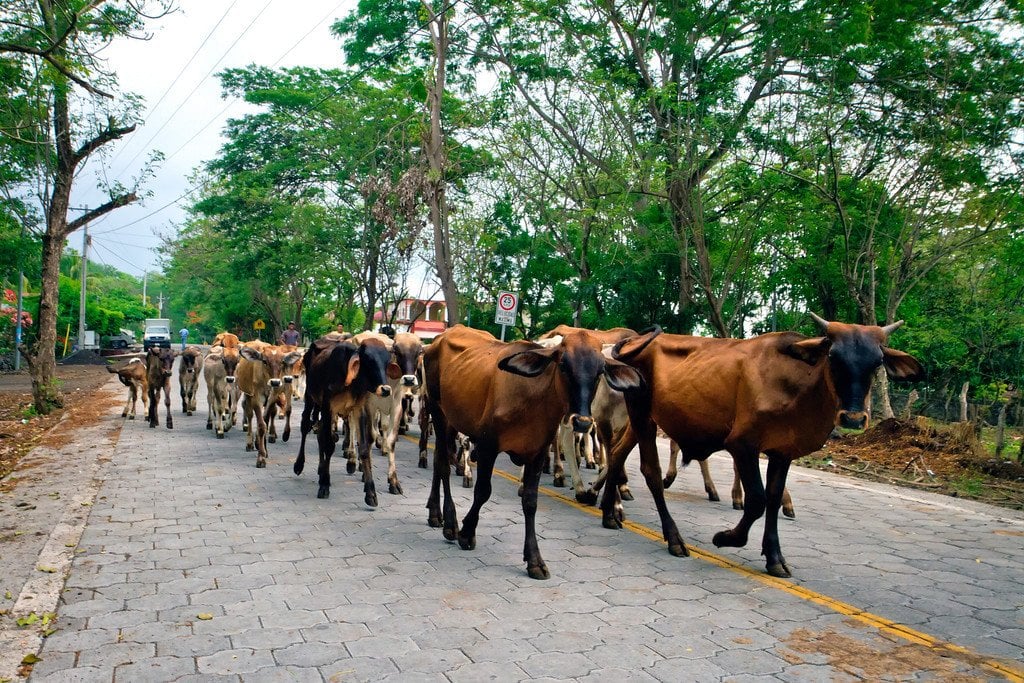 Bertha was a cheap date. I could ride her for 24 hours and it would only cost me $25.

Our goal? Encircle the island on a whirlwind honeymoon tour while getting into as much mischief as we could along the way!

The adventure began by zipping South down the paved road from Moyogalpa and then East along the Southern coast. There was seldom any other traffic, except an occasional slow moving tractor or herd of cows blocking the entire road.

Ometepe’s primary source of income is agriculture & livestock, which means we passed farm after farm of plantain banana trees, and not much else.

Oh yeah, I guess the beautiful volcanoes that framed the landscape around us should be mentioned too.

In the afternoon we pulled off the side of the road to Ojos de Agua, a (cold) natural spring in the middle of the forest. Bertha doesn’t know how to swim, so I cooled off in the refreshing crystal-clear water with some other women while she watched jealously.

She knew the magnetic power she held over me though… I’d come back to her eventually. 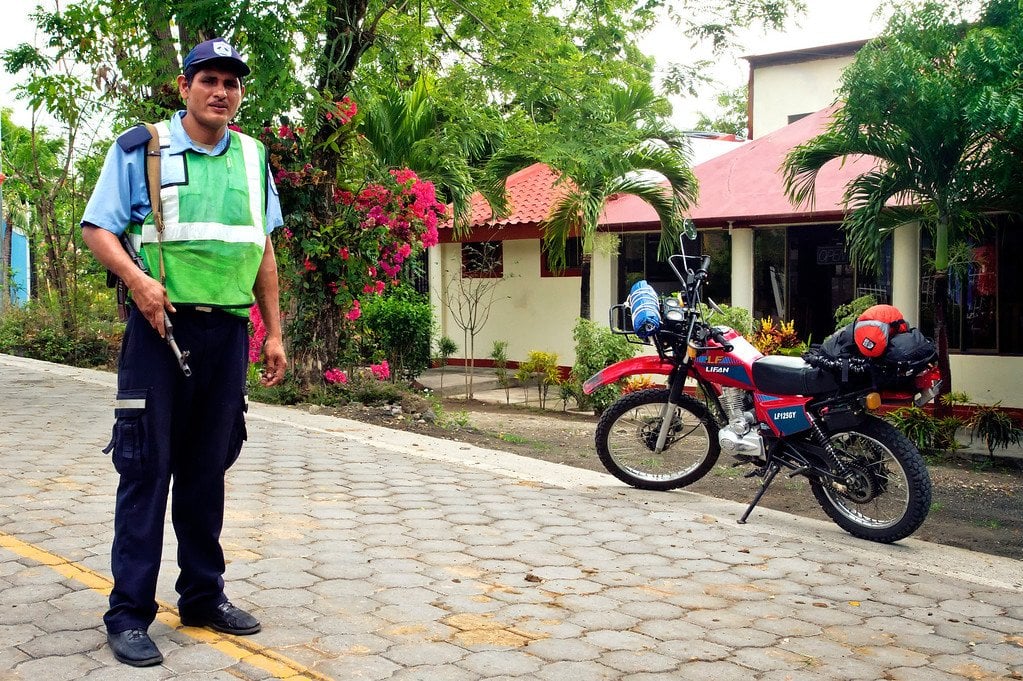 Officer Manuel Tries to Pull a Fast One!

Trouble With the Law

Back on the road we headed north to the isthmus that divides the two volcanoes, and then East again crossing over to the area around Volcano Maderas. Suddenly, a police officer armed with an automatic rifle walks out into the middle of the street signaling for us to stop.

I have to admit I was a bit nervous.

What did he want? Were we speeding? Had we broken some unknown law?

He asked for our papers. I opened my wallet and handed him my license… but I couldn’t find Bertha’s documents!

Then I remembered I had put them in a separate pocket.

“¿Dónde está tu placa?” (Where is your license plate?) 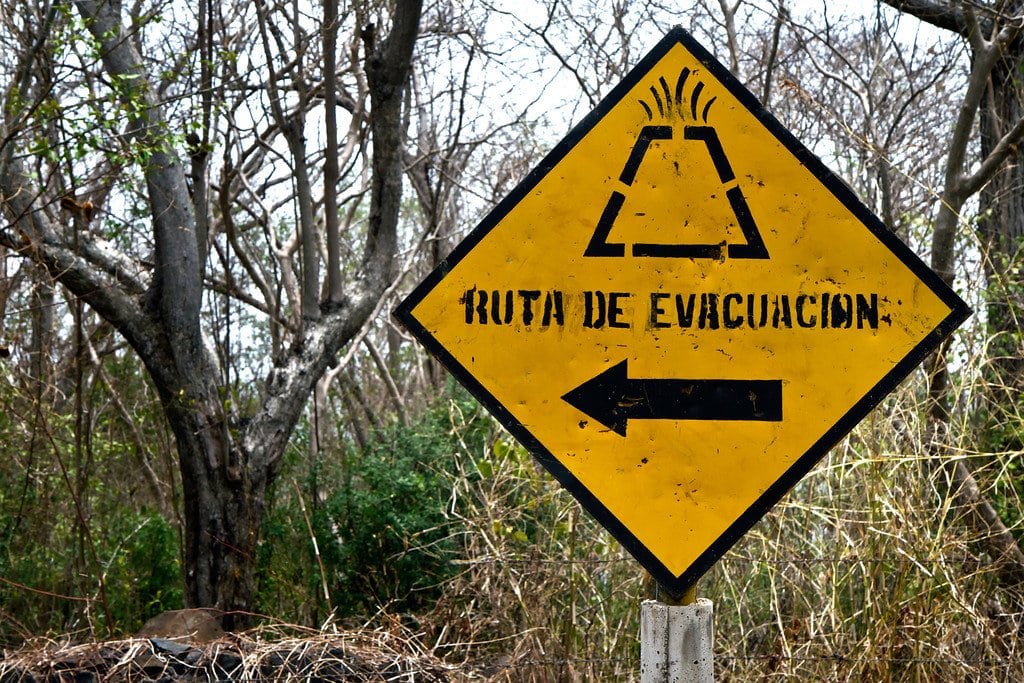 It seems Bertha and I were engaged in a forbidden relationship. We were traveling together in sin, without proper marriage documents, and that didn’t go over to well in these here parts…

The officer stood in silence looking at my open wallet – I think he wanted a bribe to keep quiet about it!

But then he finally noticed the video camera strapped to my helmet. :)

He smiled for the camera and waved us on. 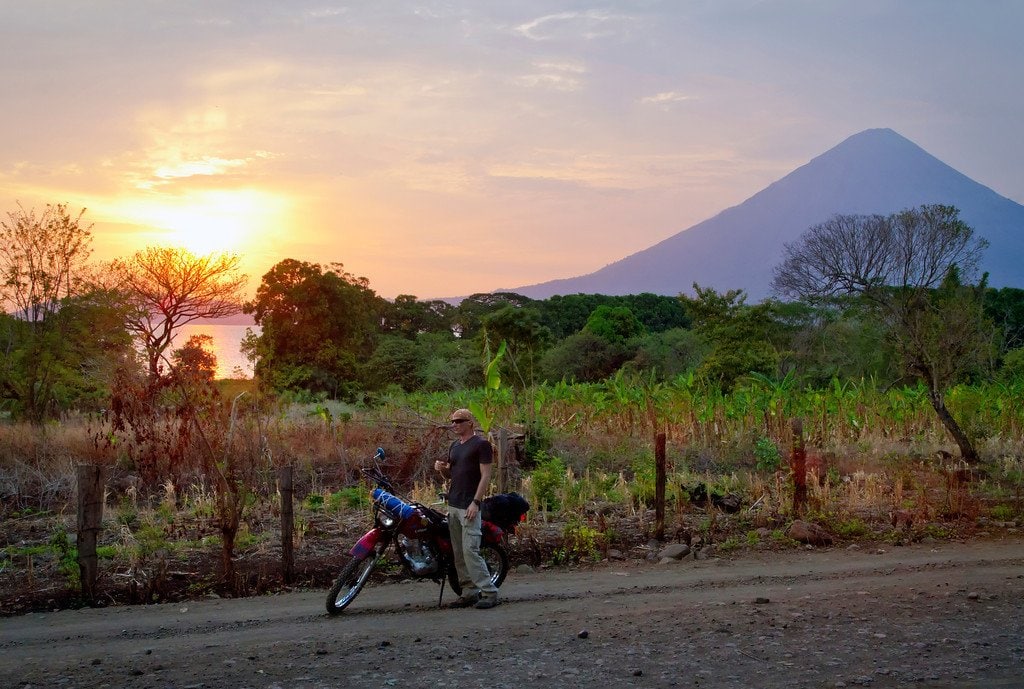 Enjoying a Romantic Sunset Together

At the dark sands of Santa Domingo Beach, the pavement disappeared. This is when the real fun began! The road got rough, and we powered up steep hills covered with boulders and plunged headlong into creeks that crossed our path.

Motoring through small towns like Santa Cruz & Merida, we waved to friendly locals who passed by on motorcycles, bikes, horses, and on foot.

At one point Bertha and I stopped to watch a lively soccer game, but unfortunately we didn’t go unnoticed. At least 75 people turned to stare at us.

Scandalous inter-racial (inter-mechanical maybe?) relationships such as ours in the midst of these very religious communities will always attract attention! 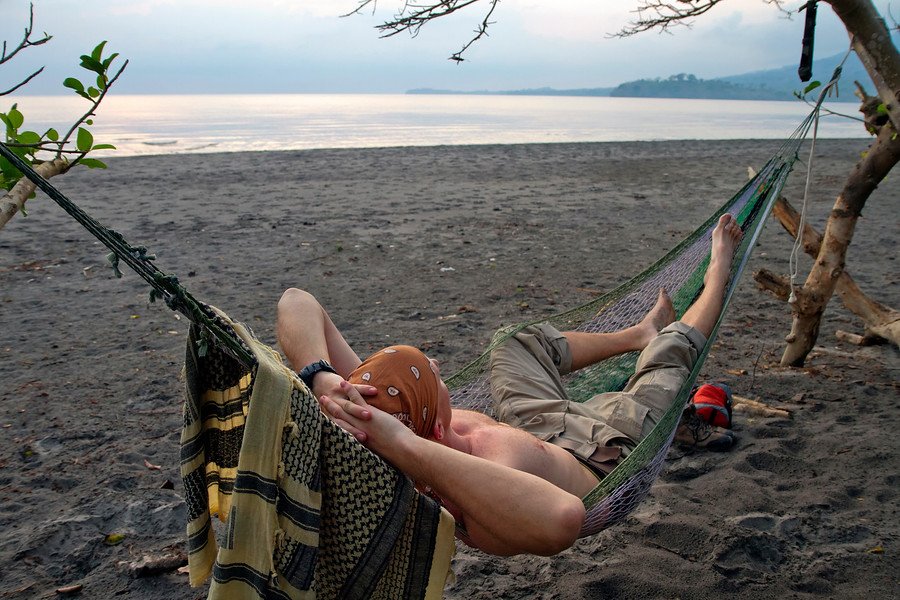 Camping on the Beach

It was getting late, and I needed to find a place to set up my hammock to spend the night.

We weren’t sure we’d make it to another beach before dark if we continued in the same direction – so we turned around to head back to Playa Santa Domingo, because it looked like an ideal spot to camp.

I had to sleep alone though, because Bertha weighed 300lbs and the hammock would’t support the both of us…

A light rain started falling in the middle of the night (it was the beginning of rainy season after all) and I put up a tarp to keep dry. 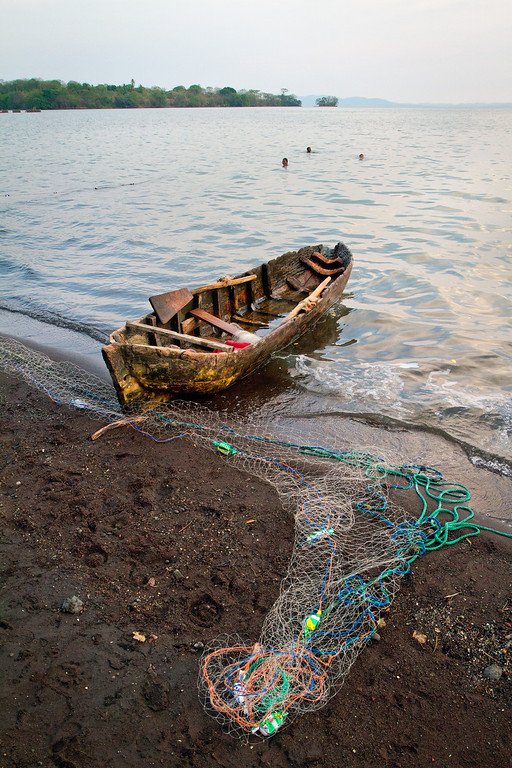 In the morning we struck out again and reached another beach on the South Eastern corner of the island. I stopped to rest while I watched a woman & some children fishing off the shore with a giant net. It looked like they could use some help.

The woman in charge gave me a big smile, and proceeded to show me what to do. Her and I were going to pull the net in, while the kids swam around unhooking it from snags underwater. This was hard work! Not as easy as I initially thought it would be.

I said goodbye to the family, and continued on with Bertha in order to finish circling the island. 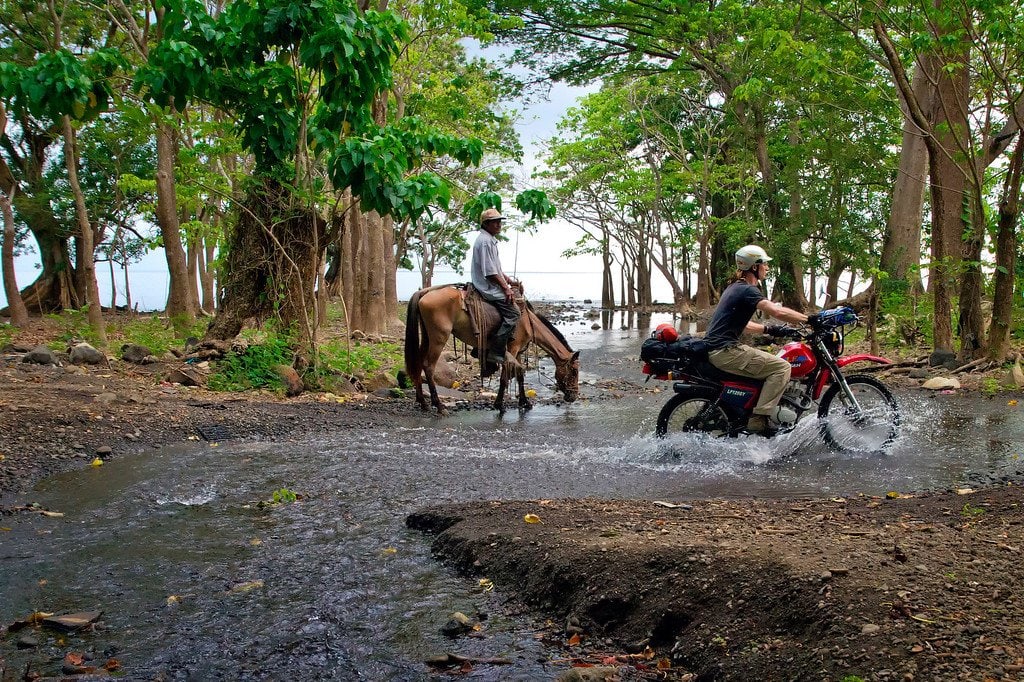 Is He Checkin’ Out My Woman!?

Around the little village of Punta Gorda, the road gets pretty rough. I had quite a workout maneuvering my mistress up and down steep sections of trail while winding through boulders. She stalled out on me a few times when I didn’t change gears fast enough…

I was now feeling much more confident in my ability to man-handle her though, so when we approached a calmer section of dirt track I opened her up a bit! My adrenaline level was high as we flew down the rocky road, bouncing around at 30 mph.

But then we hit a soft patch of sand.

I hit the breaks (bad idea) while Bertha’s backside slid out from under me. Luckily I jumped clear so she wouldn’t crush my leg as she crashed to the ground!

We were both a little rattled, but unharmed. :)

After crossing more streams, muddy paths, and paved roads again, we ended our honeymoon excursion back in the town of Moyogalpa; wet, dirty, and exhausted.

Sadly our wild 24 hour love-affair had come to an end. It was time to go our separate ways… But we’ll always have the memories. ★

I hope you enjoyed this story from Ometepe, Nicaragua! Hopefully you found it useful. Here are a few more wanderlust-inducing articles that I recommend you read next:

Have you ever had a steamy love-affair?